In an online world in which countless systems are trying to figure out what exactly you enjoy so they can serve you up advertising about it, it really fucks up their profiling mechanisms when they think you like everything. And to help you out with this approach, I recommend checking out the Chrome/Firefox extension AdNauseum. You won’t find it on the Chrome Web Store, however, as Google frowns at extensions that screw up Google’s efforts to show you advertising for some totally inexplicable reason. You’ll have to install it manually, but it’s worth it.

It’s no secret the internet is packed with companies eager to figure out everything you do, everything you like, and what things you like more than the other things you like so you can be shown advertising that will remind you to buy and do those liked things. Such is the way of the online world — the price we pay to access content freely.

You can try to combat data-collection in all kinds of fun ways, including manually blocking or clearing the data companies have on you and preventing yourself from being tracked as much as possible with various adblockers, anti-tracking extensions, and privacy-themed browsers, but considering the number of systems out there tracking you, those methods can only be so effective.

AdNauseum works on a different principle. As Lee McGuigan writes over at the MIT Technology Review:

“AdNauseam is like conventional ad-blocking software, but with an extra layer. Instead of just removing ads when the user browses a website, it also automatically clicks on them. By making it appear as if the user is interested in everything, AdNauseam makes it hard for observers to construct a profile of that person. It’s like jamming radar by flooding it with false signals. And it’s adjustable. Users can choose to trust privacy-respecting advertisers while jamming others. They can also choose whether to automatically click on all the ads on a given website or only some percentage of them.”

McGuigan goes on to describe the various experiments he worked on with AdNauseum founder Helen Nissenbaum, allegedly proving that the extension can make it past Google’s various checks for fraudulent or otherwise illegitimate clicks on advertising. Google, as you might expect, denies the experiments actually prove anything, and maintains that a “vast majority” of these kinds of clicks are detected and ignored.

Frankly, I’d give the extension a try. Worst case, it doesn’t do anything. Best case, you find that the various ads you’re seeing around the web aren’t really specific to anything you’re interested in — at least, not as much as before, when you swore “Facebook was listening” because you saw an ad in your feed for something you talked about with a friend the day prior. 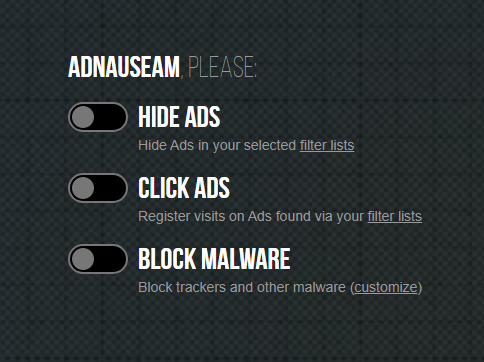 Feel free to enable all three, but heed AdNauseum’s warning: You probably don’t want to use the extension alongside another adblocker, as the two will conflict and you probably won’t see any added benefit.

As with most adblockers, there are plenty of options you can play with if you dig deeper into AdNauseum’s settings. For example, you can customise your filter lists and add or remove anything you want, in case you’re running into issues with adblocks (or need to block more): 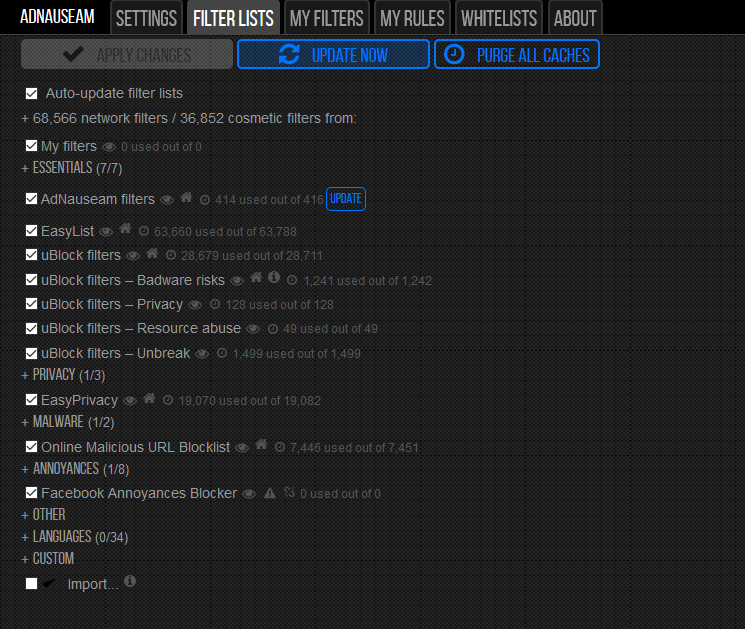 You can also adjust how often AdNauseum “clicks” on ads you’re served under its general Settings menu: 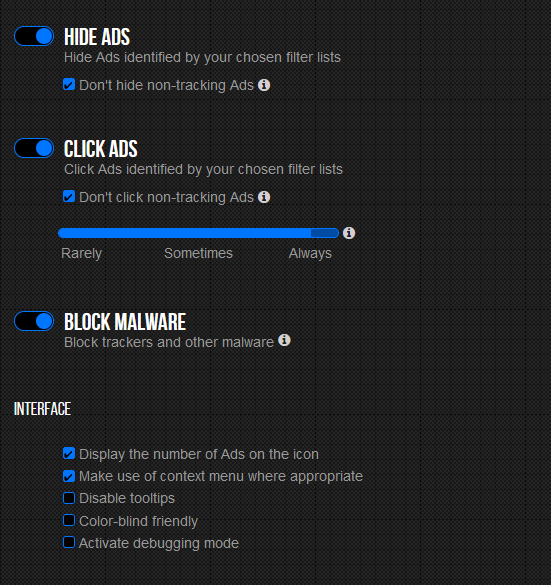 I confess, I couldn’t get AdNauseum to produce effective results on my Firefox installation — nothing appeared “clicked” in my vault — but the extension’s adblocking capabilities worked wonderfully. However, I have a pretty unique adblocking setup at home, which could explain my issues.

AdNauseum may not be the be-all, end-all solution to thwarting online advertising, but it is an incredibly useful adblocker — a fork of the ever-popular uBlock Origin — so it doesn’t hurt to give it a whirl. If you like it, great. If you don’t, there are plenty of other tools you can try to fight online advertising — or at the very least, to prevent yourself from seeing it, even if you’re still being profiled by a thousand sites and services every time you load a web page.

And note that AdNauseum still (theoretically) generates revenue for the sites tracking you. That in itself might cause you to adopt a nuclear approach vs. an obfuscation-by-noise approach. Your call.