How to Use YouTube’s ‘Stats for Nerds’

Despite its name, YouTube’s “Stats for Nerds” feature isn’t just for nerds. The option is turned off by default in all YouTube videos, but when enabled, a small window appears over your video with information like current video quality, buffering information, and more. 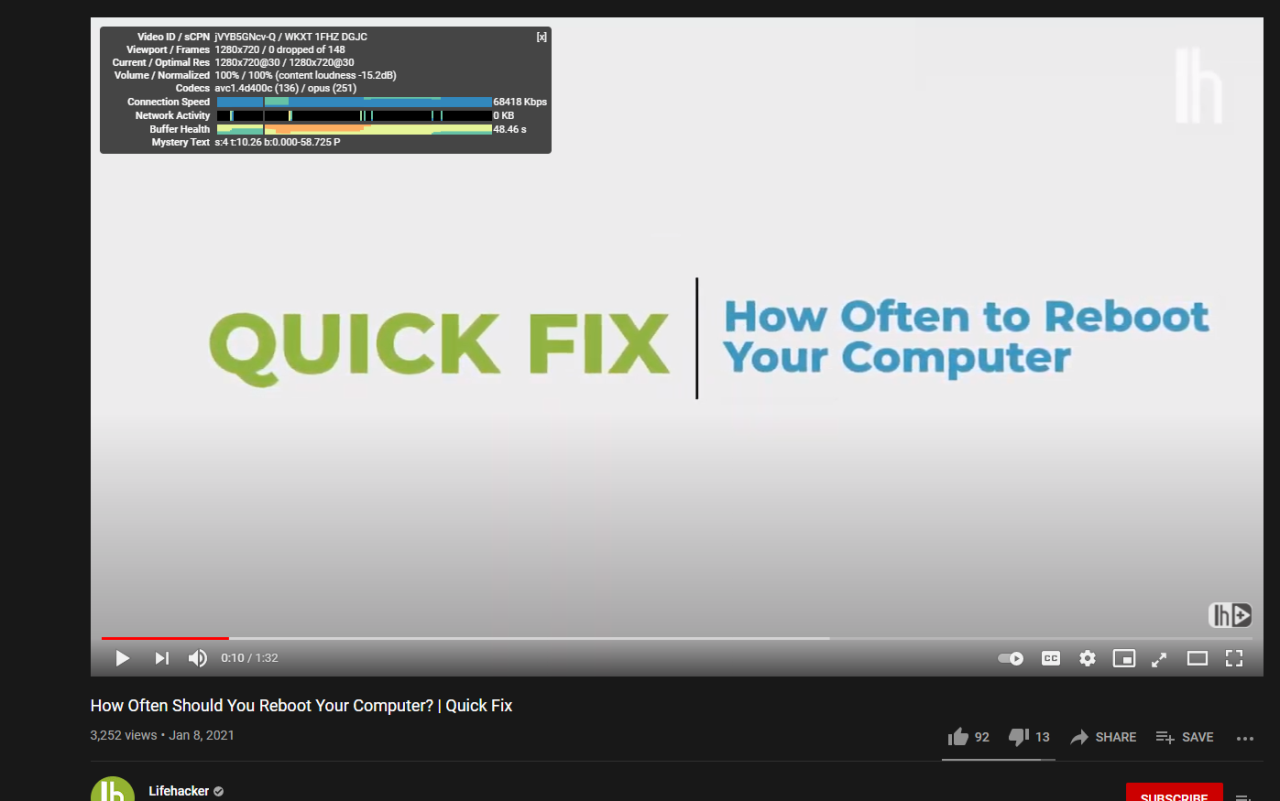 Here’s a brief explanation of what each field means:

Video ID / sCPN: The video’s ID in YouTube’s database and the code for your specific playback instance.

Viewport / Frames: The video player’s resolution (not the video’s resolution) and the current frame you’re on.

Volume / Normalised: The current volume of the video you’re watching and how much the audio is “normalised.” Normalisation matches louder and quieter parts of the sound more closely to protect the listener’s ears and speakers. The parenthesis shows how loud the video is compared to YouTube’s baseline.

Colour: This shows the current colour range of the content you’re watching. This info can help you confirm your Xbox Series X|S or Xbox One console can finally play HDR videos on YouTube.

Network Activity: The data transmission from YouTube’s servers to your device. The higher a video’s resolution, the higher the network activity — aka bandwidth — will be.

Buffer Health: How much YouTube is able to buffer the video to avoid playback hitches and dropouts due to poor connection speed.

Mystery Text: Mystical messages from realms beyond human comprehension. Or at least that’s my best guess. No one really knows what this data means, though plenty of folks have tried to guess.

Some of this information is neat, but most of it will look like techno gibberish for average users. That doesn’t mean it isn’t helpful, however. The network information is useful if you’re having playback issues and can’t pinpoint what’s causing it.

However, Stats for Nerds’ main use is for aiding YouTube’s engineers with troubleshooting bugs. If you ever encounter YouTube problems like sudden app crashes, slow video buffering, or other issues, snap a screenshot of the Stats for Nerds window and send it to YouTube support with a bug report.

How to turn on YouTube’s Stats for Nerds

Stats for Nerds is useful, but finding and turning it on will differ slightly based on the device you’re using.

In general, toggling Stats for Nerds should work the same on these devices.