The Best New Features and Fixes of iOS 14.3

iOS and iPadOS 14.3 are here, and they appear safe to download. At least, I haven’t noticed any major reports of the update bugging out iPhones left and right, but it’s also still a little early. If you’re tentative, or you’re not foaming at the mouth to get your hands on some of the features it brings to your iPhone — more on that in a bit — maybe give iOS/iPadOS 14.3 a few more days to be super-sure about it.

Yes, it’s sad that I have to give a disclaimer for updates now, but it feels like that’s just the nature of devices lately: You’re only one bad update away from a terrible experience, so you might as well wait for others to fully test it out before you deal with it.

Anyway, iOS 14.3 does pack in some pretty useful features. Here’s a quick look at our favourite ones — big and small — and how to get started with them. And going forward, I’ll simply write iOS 14.3, but know that I’m also talking about the iPad’s updated operating system.

We’ll start with the least-sexy and most important feature first: fixes. iOS 14.3 comes with a number of security and bug fixes for issues plaguing iOS 14, including a (hopeful) fix for any issues you’ve been experience with wireless charging on your new iPhone 12 (or variants). Bugs that Apple has dealt with in iOS 14.3 include:

– Some MMS messages may not be received

– Contact groups failed to display members when composing a message

– App folders may fail to open

– Spotlight search results, and opening apps from Spotlight may not work

– Bluetooth could be unavailable in Settings

Again, that’s not the most exciting list to gawk at, but it is important if you’ve been experiencing any of the bigger iOS 14 bugs, including a recent one that didn’t trigger a notification for new text messages. They’d arrive just fine, but your phone wouldn’t let you know there was something new to look at, so you’d likely not see it for some time.

Simply put, you’ll need iOS/iPadOS 14.3 if you want to partake in Apple’s new subscription Fitness+ platform or if you want to use your new AirPods Max headphones with your iPhone or iPad. That’s it. End of story. I don’t have the latter — nor do a lot of people, based on shipping delays — so I can’t walk you through any other features yet, but I suspect everything you’ll do to set up your AirPods Max to your liking will be the same way you’d otherwise configure some AirPods Pro:

Make sure you give spatial audio a try!

As for Apple Fitness+, Lifehacker’s own Beth Skwarecki took a look at that yesterday. I encourage you to read her guide to setting up Fitness+ and what you’ll get out of Apple’s $14.99/month subscription:

The Absolute Beginner HIIT workout lived up to the first part of its name, a gentle series of 30-second exercises that I’d be happy to recommend to anyone who is totally new to exercise. (Most “HIIT” workouts you’ll see online are not, in fact, high intensity intervals, and neither is this.)

I also did the first few minutes of a Reggaeton dance workout, which was easy to follow and a good moderate intensity.

A “burn bar” shows how your effort compares to other people who have done the same workout. (If you agree, the app will send your effort level in to become part of the data that future users will be compared against.) At the end of the workout, you see your elapsed time, calories and heart rate and you have the option to quit or to do one of the app’s “mindful cooldowns.”

How to enable ProRAW

Apple’s fancy new format for photography enthusiasts is here. To use it, you’ll need iOS 14.3 and either an iPhone 12 Pro or the iPhone 12 Pro Max. To turn it on, pull up Settings > Camera > Formats and enable Apple ProRAW under Photo Capture. 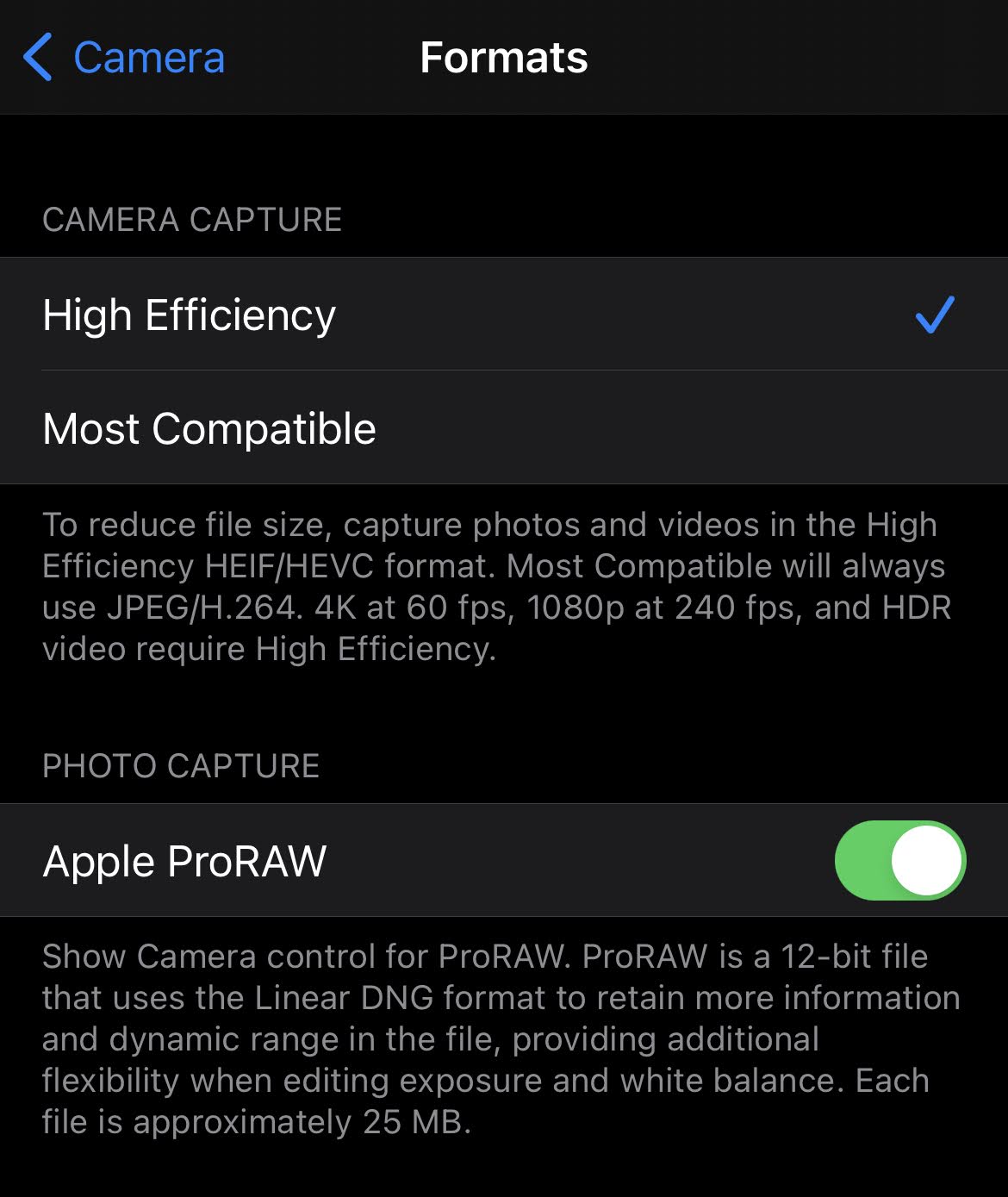 Keep in mind that this is probably not the setting you’ll want to use for casual photography. Not only will your file sizes be huge, but these uncompressed images will be a pain in the arse to deal with if you aren’t using an app that supports them. Many do, but don’t expect to be able to casually edit all the properties of ProRAW files in, say, Google Photos.

Remember all those trippy iPhone backgrounds people were creating by using shortcuts with custom icons to launch apps? iOS 14.3 brings a small tweak to this process. Now, instead of launching a quick Shortcuts screen that then launches the app in question, custom shortcuts directly launch the app. It’s speedy, seamless, and just what you wanted if you’ve been working hard to give your iPhone a wild, custom appearance.

If you have an Apple Watch paired to your iPhone, you can now track your VO2 Max levels — or your “Cardio Fitness,” as Apple calls it — via the Health app.

What the hell is VO2 Max? I’m glad you asked. As Beth wrote in August:

VO2max, properly rendered VO2max, is the maximal volume (V) of oxygen (O2) your body can use per minute during exercise, scaled to your body size because larger people will naturally use more oxygen.

This is considered a good measure of aerobic fitness because — think back to high school biology — your body uses oxygen and food to create a usable form of chemical energy. The amount of oxygen directly correlates with the amount of energy produced. Or, in simpler terms, the more work you do, the more oxygen you need.

So a person who is aerobically very fit — let’s say an elite marathon runner — can do more work (run faster) than somebody who isn’t. As a result, they’ll suck in a lot more oxygen per minute during their run than, say, I would.

And if you’re curious how your personal VO2 levels stack up, there are plenty of charts for that, too. 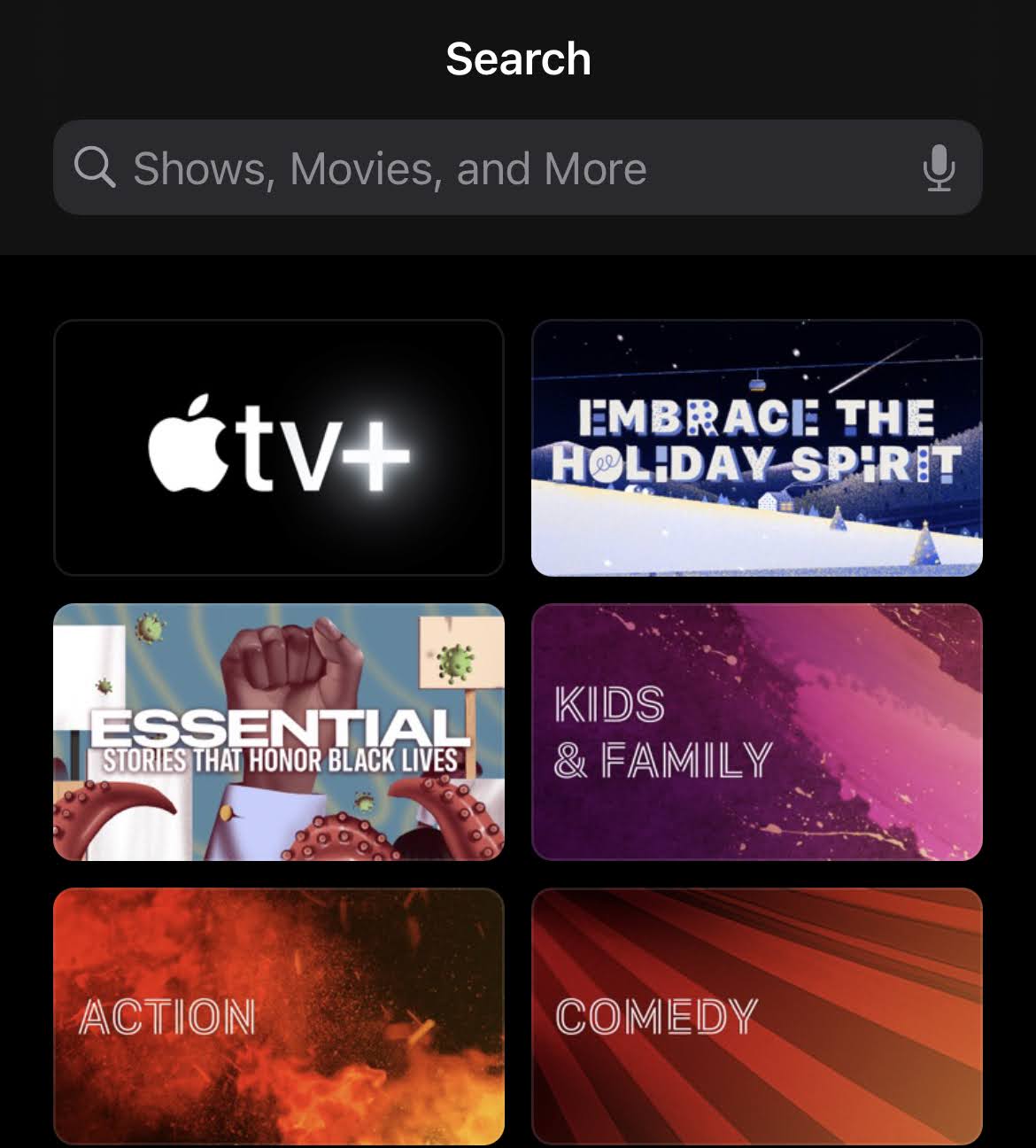 A brand-new section in the TV app shows you all of Apple’s original programming (naturally). You can also now search by category, and search has been refined to show you results while you type and deliver more relevant results.