Precision Cook Your Brisket in Mustard and Wine

Before yesterday, I had cooked exactly one (1) gigantic brisket in my life. It was for a Hanukkah dinner party my then-husband and I threw, and it was, if I remember correctly, pretty excellent. Unfortunately, aside from a very big cut of cow, I don’t remember any of the ingredients I used (and the blog I wrote about it is no longer hosted anywhere). But I do remember cooking the whole thing very low (around 90 degrees Celsius) and very slow (about 15 hours).

It was a hit, but it was the last and only time I’ve made a brisket, mainly because my husband and I got divorced and I am no longer related to anyone who celebrates Hanukah. But I still like braised brisket and, given the past success of my low-and-slow oven brisket, I have been toying with the idea of precision cooking one for years.

Well, I finally have done it. And, as you might have guessed (because I am writing about it), I am very pleased with the results. (Well, I was very pleased. The brisket is all gone now. I ate it, and now I am displeased that it is gone.) Cooking the cut in a 85-degree circulating water bath for 18 hours resulted in a predictably tender brisket that fell apart at a mere glance, but it was the other stuff that I put in the precision cooker bag with the brisket that took it to a really special place.

I am a fairly WASP-y individual from northern Mississippi, and did not grow up eating a ton of braised brisket. I therefore did not have a favourite recipe to adapt for the precision cook. Luckily, I knew a man who did. Our video producer, Joel Kahn — who has described himself as “very Jewish” — snapped a few photos of his favourite brisket recipe (Michell Bernstein’s Mustard-Crusted Brisket from her cookbook Cuisine á Latina) and sent them my way. Immediately I knew this was what I was looking for: Mustard, Worcestershire sauce, red wine, and Lipton’s onion soup mix were the main flavour players, along with the usual onion, garlic, carrots, celery, and bay leaf. All good ingredients, but the mustard was the star. It gives the dish a tangy, slightly pungent quality that balances the richness of the meat and makes even the fattiest portions of the cut delectable. And while precision cooking doesn’t result in much of a crust, it creates a very flavorful (and tender) piece of meat with an incredible jus.

Other than using a completely different cooking method, I didn’t change a whole lot from the recipe, though I used a smaller cut of brisket (scale up if you need to), replaced the celery with fennel (because I hate celery), and decreased the mustard from two cups to one. I also burnt the heck out of a third of the onions to give the dish the sort of deep, browned flavour you often sacrifice when you cook meat in a precision cooker. (If you are new to precision cooking, check out this introductory guide here.)

I am very pleased with how it came out, and I hope you will be too. To make it, you will need:

Heat 1 tablespoon of oil in a large sauté pan over medium-low heat and cook the garlic until it is lightly golden and fragrant, taking care not to burn it. Transfer it to a high-walled mixing cup or container that can accommodate the head of an immersion blender. Set aside.

Increase the heat to medium, add 2 cups of onions to the pan, season them with a couple pinches of salt, and cook until they are translucent and lightly browned on the edges. Scrape into a bowl and set aside.

Increase the heat to medium-high (but closer to high), and add another tablespoon of oil and the remaining cup of onions. Cook the onions until they are burnt, but still tender in spots. They should look something like this (except your onions will be diced):

Remove the burnt onions from the pan and add them to the measuring cup with the garlic.

Add 2 more tablespoons of oil to the pan, then add the carrots and fennel. Season with a couple of pinches of salt, and cook until they are browned and blistered on outside, but not soft. Transfer to the bowl with the translucent onions. Add the bay leaf to the bowl, and toss to mix. Transfer the vegetable mixture to a precision cooked bag (or a freezer bag).

Sear the fat side of the brisket until it is golden-brown and add it to the bag with the vegetables. Add the mustard, Worcestershire sauce, wine, and onion soup packets to the mixing cup with the burnt onions and garlic, and purée everything together with an immersion blender (this can also be done in a “regular” blender). Pour the mixture over the meat and use your hands to spread it over the entire hunk of brisket. Seal the bag with a vacuum sealer if you are using vacuum bags; if you’re using freezer bags, double bag it with a second one, express any extra air using the water displacement method, and clip the top of the bag to the side of the bath. Cook the brisket for 18 hours in a water bath set to 85 degrees Celsius. (Cover the bath with plastic wrap to keep the water from evaporating.)

Once the cook time has elapsed, remove the brisket from the bath and decide if you want to eat it right away or serve it later. If you’re going serve it later, place the whole bag in an ice bath to chill to room temperature, then transfer to the fridge until you are ready to serve. 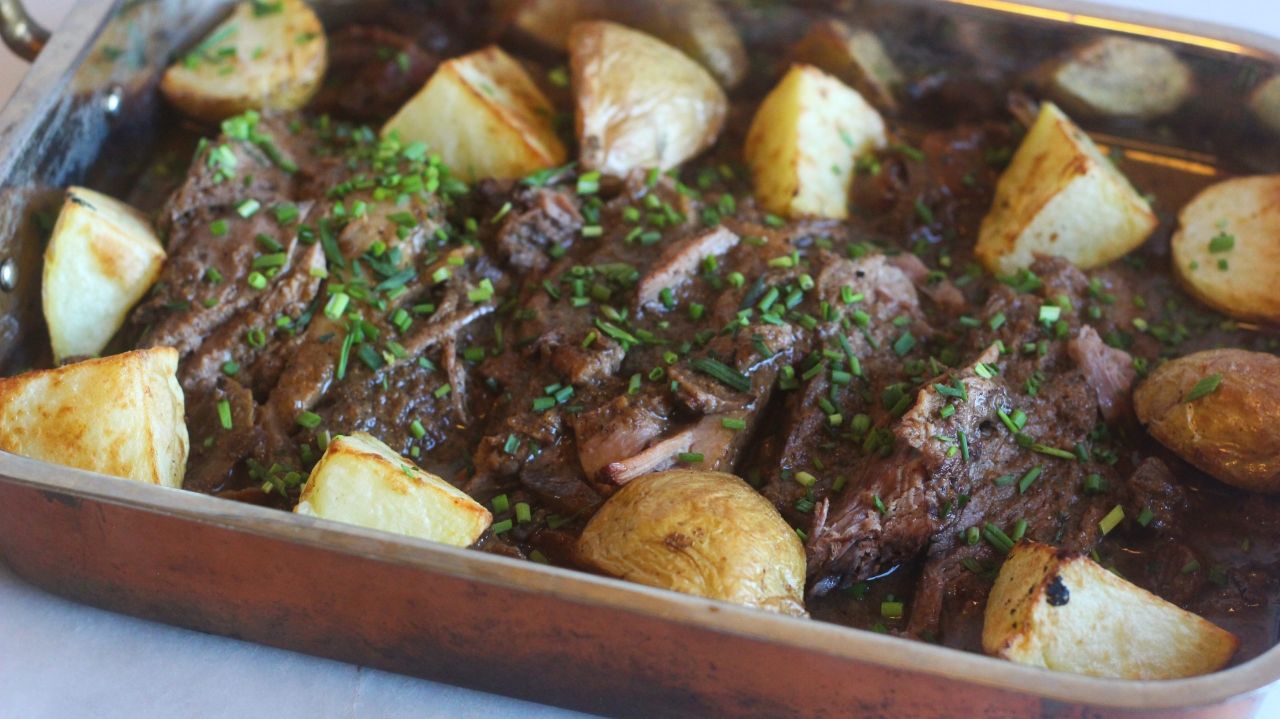 If you’re going to eat it right away, transfer it to a serving platter or pan, and carve it against the grain into thin slices. You may find this to be difficult, given how tender the brisket is; don’t worry about it too much. Pour the remaining contents of the bag into a colander to separate the jus from the vegetables. The vegetables will be quite soft — I like spreading them on rolls and mashing them into a pile of roasted potatoes, but you can also save them to puree into gravies and sauces to thicken them up.

Just before serving, pour the jus over the meat and garnish with chopped chives or parsley. If you chilled your brisket and need to heat it up, carve it as described above, set it in a roasting pan, pour the jus on top of the meat, and heat it in a 175-degree oven until it has been warmed throughout. Serve with roasted potatoes and lots of rolls (for sopping up the incredible, mustardy jus).