Considering it’s one of the biggest-selling games of the year, Cyberpunk 2077 is a mess. It might run well on your PC, if you have good enough specs, but there are still plenty of game-breaking bugs to deal with. One of the worst can corrupt your save file without warning, leading to hours of lost gameplay.

According to many posts on Cyberpunk 2077’s subreddit, GOG technical support, and the Steam community page, if your save file gets larger than 8MB, Cyberpunk 2077 will refuse to load it. This corrupts the save file irreparably, which could be devastating to your in-game progress if you don’t have a backup file. 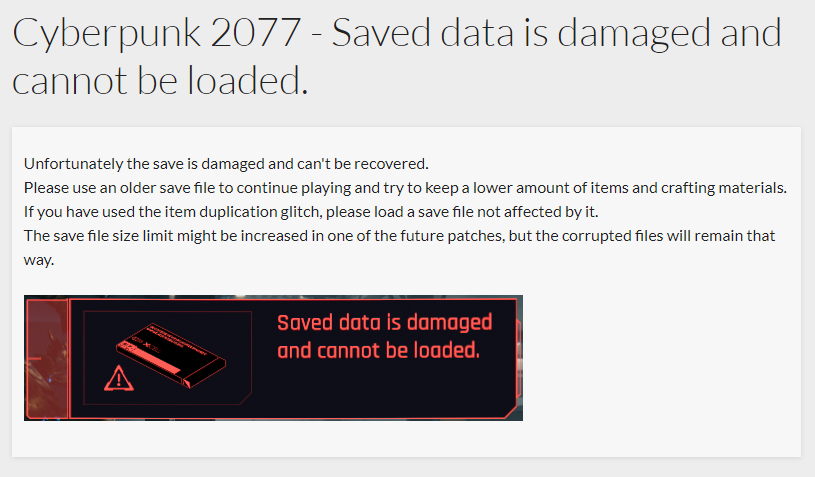 The company responded to several complaints, saying the limitation is on purpose — but it might increase the supported file size in future patches. Unfortunately, already corrupted saves cannot be recovered. That means until the potential patch shows up, ruining your saved game is a constant possibility if the file becomes too big. However, you should be able to avoid this with a few modifications to your gameplay.

Excessively crafting weapons or storing too many collectables in your character’s inventory appear to be the most reliable ways to inflate your save file. Considering Cyberpunk 2077 is an open-world RPG that actively encourages you to loot everything, you’d think CD Projekt Red would warn players that having too many items could corrupt their save — but I digress.

Players can avoid this unfortunate occurrence by only looting what they need and carrying or crafting as few items as possible. You should also avoid using item duplication glitches to cheat your way through Cyberpunk 2077. Sure, it might seem like an easy shortcut to securing the best cars and equipment, but you’re risking a full-on save corruption by abusing the glitch.

Keep and eye on total playtime

Limiting your urge to steal and duplicate everything your come across in Night City will reduce the risk of a corrupt save, but your file will still slowly get bigger as you play, regardless of your play style. At some point, it could get too big.

Unfortunately, it’s difficult to estimate how data much each in-game hour adds to a Cyberpunk 2077 save file. Browse through the CD Projekt Red forums and you’ll find users who encountered the bug after playing for 70-100 hours, and others, just 25-40 hours. That disparity makes it difficult to recommend a total playtime limit. Still, it’s important to know every moment you spend in game adds to your save file’s size — so make that time count.

Always have a backup save

Admittedly, until we know for sure how much every item you pick up or minute of gameplay adds to your save file, it’s hard to give you specific figures. A dedicated group of Cyberpunk 2077 players has been crunching the numbers and tracking every kilobyte so others can avoid losing their save files, but save corruption will be an ever-present possibility until CD Projekt Red fixes the bug.

Even if they do — and that’s a big if — some users have experienced the bug even when their saved game file is smaller than 8MB, suggesting there could be other causes as well. Therefore, the only real solution is to back up your Cyberpunk 2077 saves often so you can restore your progress if you accidentally play the game “too much.”