Use This Website to See What Software Runs on M1 Macs

Apple’s pivot away from Intel processors to using its own M1 chip in its Mac PCs and MacBooks means iOS apps can now run directly in macOS. Unfortunately, it also means some desktop apps developed for Intel hardware are now incompatible on the new M1 Macs.

While many popular Mac apps are natively supported, others require a program called Rosetta 2. Rosetta 2 is an emulator — basically, it uses software to mimic Intel’s hardware so you can run Intel-only apps on your Mac, even if they’re not natively supported yet. Spotify’s desktop app is one example.

However, there’s a sizable portion of apps that don’t run on the M1 Macs and do not have Rosetta 2 support, such as the popular music production software, Pro Tools. Furthermore, some apps run on Mac — either natively or through Rosetta 2 — but have bugs and performance issues. Many of Adobe’s Creative Suite apps — such as InDesign and Illustrator — fall into this category.

To help users confirm what software their new M1 Macs can run, Programmer Abdullah Diaa created a handy website called “Is Apple Silicon Ready?” that shows exactly which apps work on M1 Macs. You can use the search bar at the top of the page to find a specific app, or browse the entire list page-by-page. 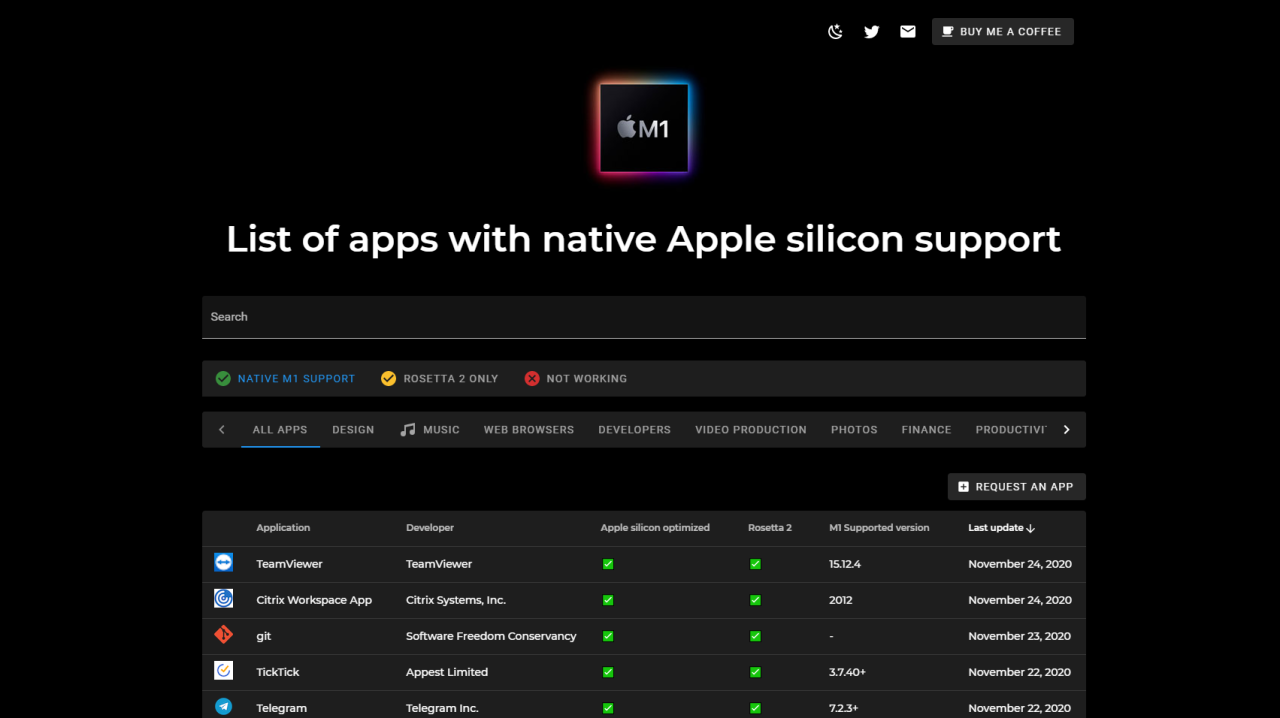 There are filters to show only apps with “Native M1 Support,” “Rosetta 2 Only,” or “Not Working,” and you can narrow the list down to specific categories like video production, productivity, photography, and more.

The table’s icons indicate if an app is supported (either natively or with Rosetta 2):

The table also lists which version of the M1 firmware is required to run the app. You can click on the app to see more details about its performance, and whether M1 support is planned for programs that aren’t compatible yet.

If you don’t see the app you’re looking for listed — or you’re a developer and want to add your software to the site or change the listed support — click “Request an app” and fill out the submission form.