Make Something With Pumpkin That Isn’t Pie

Growing up in Jamaica, I never realised how polarising pumpkin was until I went to culinary school in Toronto. During an autumn menu planning session, I advocated for pumpkin pie, declaring it “10 times better than apple pie.” I am still haunted by the visceral reactions my classmates had to my bold proclamation. I could see my social standing drop, but this was a hill on which I was willing to die. (Plus, my accented, sonorous voice made me wildly popular, so I could have done with fewer friends anyway.)

“Maybe it’s because they’ve never had real pumpkin,” I tell myself when I meet a pumpkin hater, trying to understand. I’m not sure why pumpkin garners so many hateful reactions, but I think I know who is responsible. Food and drink manufacturers created the pumpkin spice industrial complex, and since the early aughts, they have conspired to push pumpkin spice everything down our throats like we’re geese being fattened for Christmas. 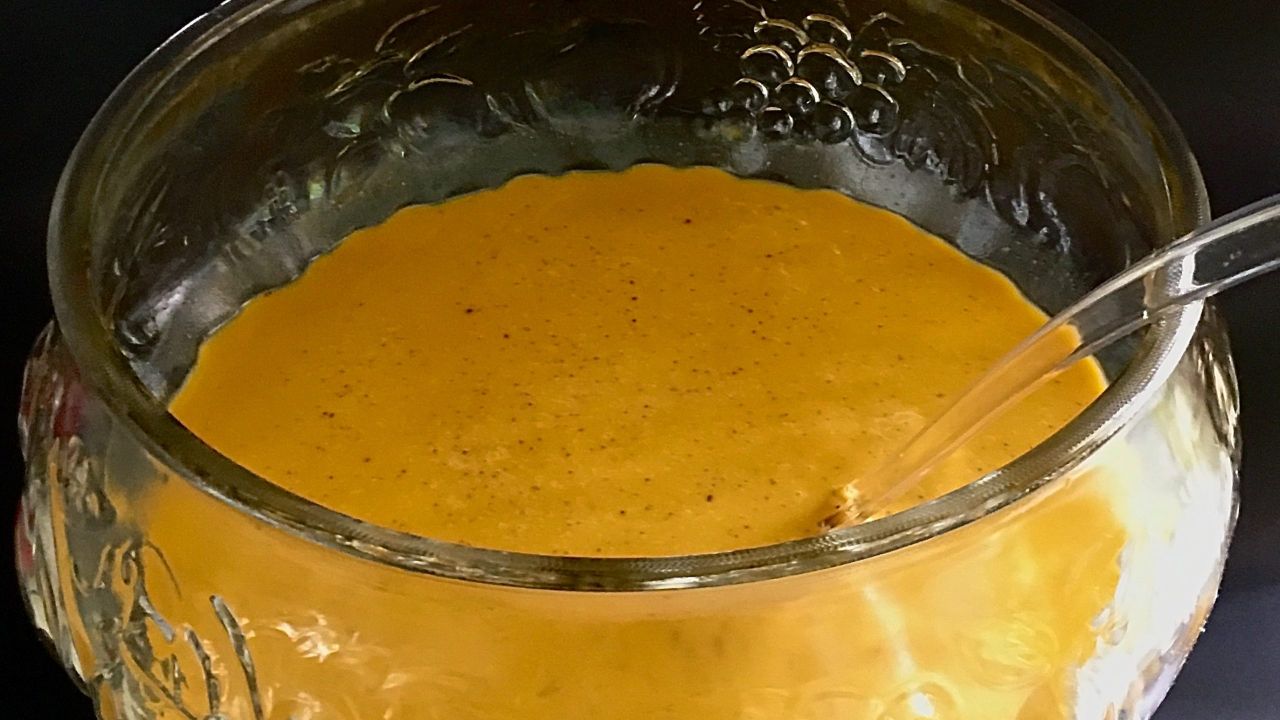 Relegating pumpkins to flavored lattes and pumpkin carving dishonors the Oaxacans who domesticated pumpkin over 7,500 years ago. Pumpkin is nutrient-dense, and high in fibre, beta carotene, antioxidants, lutein, and potassium. Also, it contains immunity-boosting vitamins (A, C, and E), which we all should be ingesting lots of, especially right now. Pumpkin is so much more than a latte, or even a pie. It makes a stellar savoury main, fantastic vegan curry, and a delightful boozy punch. Here are six recipes, of varying difficulties, for unexpected, delicious pumpkin dishes.

Wash the pumpkin and slice the top (where the stem is attached) off. Scoop out the seeds and stringy fibres. (Set the seeds aside to plant or roast.) Get a large Dutch oven or stockpot, and fill it with enough salted water to fully submerge your pumpkin. Bring the water to a boil, place the pumpkin in the boiling water, and cook for 10-15 minutes, until fork-tender. Remove the pumpkin from the boiling water and let it cool. When cool enough to handle, scoop out pumpkin flesh leaving enough to keep the skin intact, about half an inch.

Fry the bacon and remove from the skillet when crisp. Sauté the rest of the ingredients in the fat, except for the breadcrumbs and parmesan. Stir in the pumpkin flesh that you previously scooped out.

Stuff the pumpkin with the pumpkin mixture and top with parmesan, breadcrumbs, and crumbled bacon. Bake 385°F for an hour. Slice into wedges and serve.

Sauté the dried spices in the coconut oil in a sauce pan or Dutch oven over medium heat until the kitchen smells like heaven (this wakes up the spices). Add everything except the coconut milk and broth and stir to combine. Once the pumpkin and its flavorful friends start to stick to the bottom of the pan and brown, add coconut milk and stock, scraping the bottom with a wooden spoon to loosen up any browned bit. Cover and cook until pumpkin is fork-tender and the liquid has reduced by a third. Add enough salt to appease your taste buds Serve over quinoa or rice.

This recipe has been in my family for over 50 years, don’t tell my mum it’s on the internet!

Peel, de-seed, cube, and cook pumpkin in lots of boiling water with just a pinch of salt. When the pumpkin is very soft, turn off the heat and set aside to cool. Blend three cups of cooked pumpkin with five cups of the water that it was boiled in. Pour the puree into a pitcher. Add the rest of the ingredients, stir to combine, and enjoy over ice.

Sauté pumpkin, onion, garlic, dried herbs, salt, and pepper in oil until pumpkin is tender. Add spinach and mix. Remove immediately from heat. Mix eggs, milk, cream, and 1/2 cup of each cheese together in a bowl and get ready to assemble.

Divide the spinach and pumpkin mixture between the pie crusts and then pour enough of the milk mixture on top so it reaches a quarter of an inch below the pie crust edge. Bake at 200 degrees Celsius for 30 minutes, sprinkle with remaining parmesan cheese, then reduce the heat to 180 degrees Celsius and bake until the pie is fully set (15-20 minutes).

Roasted pumpkin and beets with feta, mint, and pomegranate

I took this to a party once, and it upstaged the host’s spread. It’s been 11 years, and she hasn’t forgotten. You’ve been warned.

Grab two sheet pans and place the pumpkin, cumin, and cinnamon on one and the beets, thyme, and orange zest on the other. Pour a quarter cup of olive oil over the pumpkin pan and mix vigorously with your hands. Wash hands and repeat for beets. Place sheets in a preheated 2o0 degrees Celsius-oven and bake for 40 minutes. Once out of the oven, pour the maple syrup over the pumpkin. Let both trays cool completely.

Mix pumpkin and beets with pomegranate seeds, mint, and feta. Season to taste with salt and pepper. Place in a bowl and top with feta. Serve and watch them swoon.