Do All Apple M1 Macs Perform the Same?

Apple worked overtime last week to convince the tech world to get excited about its latest chip innovations, making bold claims that its new machines are infinitely faster than the previous generation. But here’s something to consider: Are all of Apple’s new M1 chips created equal?

Unlike the standard practices in the worlds of Intel and AMD, Apple is basically rolling out a single M1 chip. You can’t really choose to upgrade your new Mac with an M1 chip that offers faster clock speeds or more boosting capabilities than another; the one exception is the MacBook Air, as the cheapest model only has only a seven-core GPU, rather than the standard eight-core GPU.

Otherwise, on paper, it looks like you’re getting the exact same experience and performance whether you’re buying a MacBook Air, a MacBook pro, or a Mac Mini. But does that hold true in practice, too? 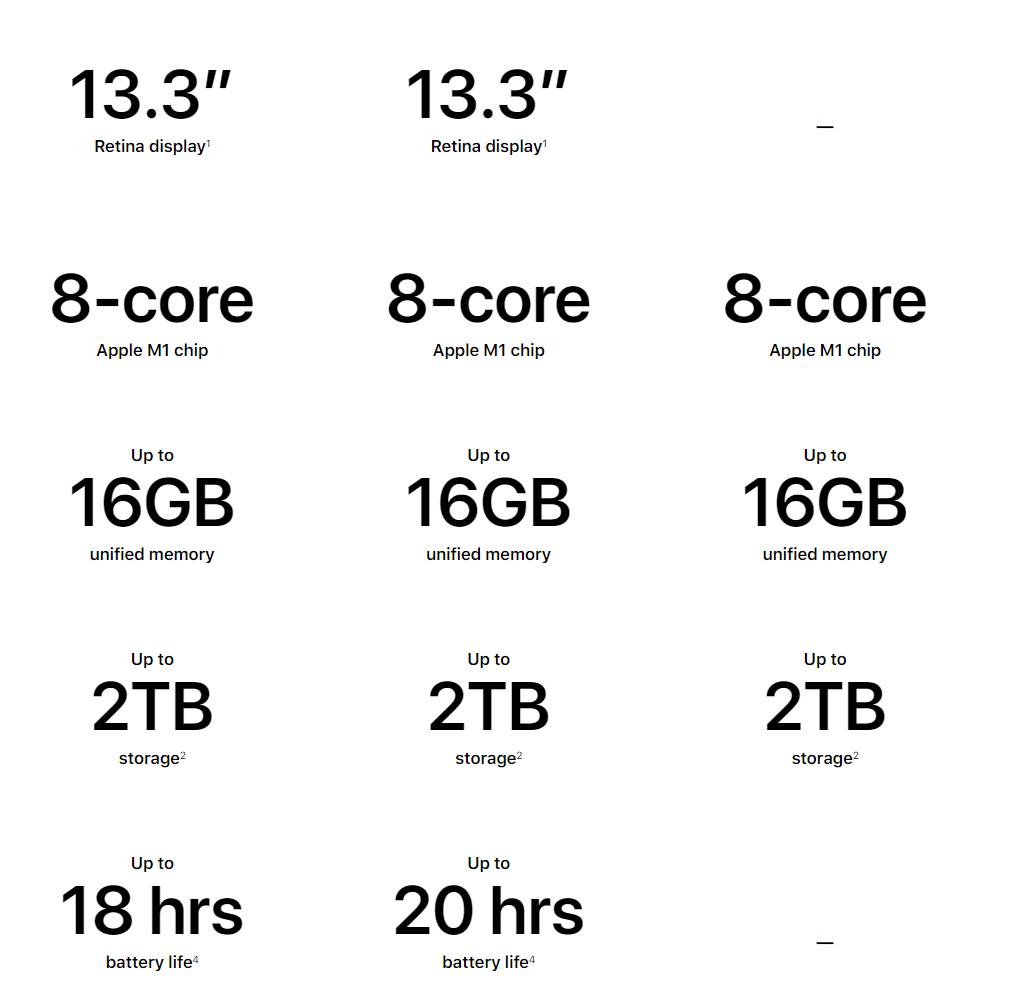 Which Apple product is which? +10 Apple points if you can tell. (Screenshot: David Murphy)

Not all M1-equipped Macs will perform the same

The differences between Apple’s M1 Macs aren’t monumental, but they’re notable. Looking at the Geekbench charts so far, Apple’s M1 chip launches its MacBook Air, MacBook Pro, and Mac Mini to the tippy-top for single-core performance. You simply won’t find a faster Mac (right now), though the Mac Mini appears to outperform the MacBook Pro (-2.4%) and MacBook Air (-4.5%) ever-so-slightly.

Jump over to the multi-core charts, and the difference is a bit more pronounced. Once again, the Mac Mini bests the MacBook Pro (-3.8%) and MacBook Air (-6.17%), in that order.

Why is this the case? I’d guess it’s a result of the various systems’ thermal limits. In other words, Apple only wants a Mac to get so hot. Letting them run like lava for an extended period of time adds extra wear and tear to the CPU. To combat this, your computer employs a variety of measures to keep cool, something you’ve surely noticed if you’ve ever heard the jet engine whine of your laptop fan kick in as soon as you open a demanding application (or your tab-filled browser).

The cooler the Mac, the faster it can run. The M1-based MacBook Airs don’t have fans, so it stands to reason that they are probably more likely to throttle down your CPU when they start to get warm versus the MacBook Pro, which can provide some active cooling. And as a desktop, the Mac Mini has a completely different build than a MacBook Pro. Since it’s not designed for portability, it will likely do a bit better with thermal management — though that’s just speculation on my part.

If you want the absolute fastest Mac you can buy, no matter what, the Mac Mini should be your choice. The MacBook Pro is second, and the blissfully silent MacBook Air takes third. None of this should matter much when it comes to everyday use of your system, but if you’re the kind of person who often pushes a machine to its limits when gaming or transcoding videos, you might want to think about how the M1 chips stack up in each situation.

That’s especially true given the price differences between Apple’s various MacBooks, depending on how they are configured. For example, the MacBook Air’s most expensive model — with an 8-core GPU — is only $70 cheaper than the basic MacBook Pro, which gives you a Touch Bar and slightly improved performance (though half the storage). If all you care about is a fast computer, and you can handle 256GB of space, the MacBook Pro is your pick.

That said, it’s important to keep this all in perspective: We’re talking about roughly a two-per cent difference in overall speeds on some benchmarks — a gap most people will never notice in everyday use. If anything, I think these benchmarks make a compelling case for the Mac Mini, given its $1,099 price tag.

I wouldn’t sweat the stats unless you’re having trouble choosing between a MacBook Air and a MacBook Pro, in which case the comparison might tip the scales ever-so-slightly. Otherwise, acknowledge the differences for what they are, know that your MacBook might feel a little slower when it gets super-warm, and think about whether you really need a laptop over that high-performing Mac Mini. Surely you can clear off a little space on your desk…