How to View the Harvest Moon and Mars This Week

If you were one of the unlucky folks who tuned into last night’s debate, you’re probably in the mood to watch something else — basically anything else — tonight. Well, as luck would have it, this week’s night sky provides the opportunity for a much quieter and calmer viewing experience, in the form of the Harvest Moon and Mars. Here’s when they’ll be out and where to look for them.

Editor’s Note: Unfortunately you’ll only be able to catch these sights if you’re in the Northern Hemisphere

When is the Harvest Moon?

Though a nearly-full Harvest Moon can be seen in the Northern Hemisphere tonight, its official appearance will take place tomorrow, Oct. 1, at 5:05 p.m. ET. This early timing is perfect if you have mini-astronomers at home (or you just want to go to bed early yourself). The moonrise will occur near the horizon not long after sunset. The Harvest Moon should be visible from dusk until dawn, depending on local cloud cover.

What exactly is a Harvest Moon? That’s what we call the full moon appearing closest to the beginning of autumn. Though it may seem like a Harvest Moon is bigger, brighter or more colourful than other moons, those are all factors that change depending on the year. For example, in 2019 the Harvest Moon was a “micro-moon” or “mini-moon” — the smallest and most distant full moon of the year, according to EarthSky. This year it’ll be the second-smallest full moon of the year. Plus, any time we look at a full moon right after sunset, its location near the horizon may make it appear to be especially large and orange.

If you know anything about the Northern Lights — also known as the Aurora Borealis — it’s probably that they don’t like sticking to a schedule. Sure, scientists can predict general times of year and geographic locations where the natural light show may be more likely to occur, but there...

If you spot what EarthSky describes as a “fiery red object” in the night sky near the Harvest Moon, that will be the planet Mars. This diagram will give you a better idea of its placement this week: 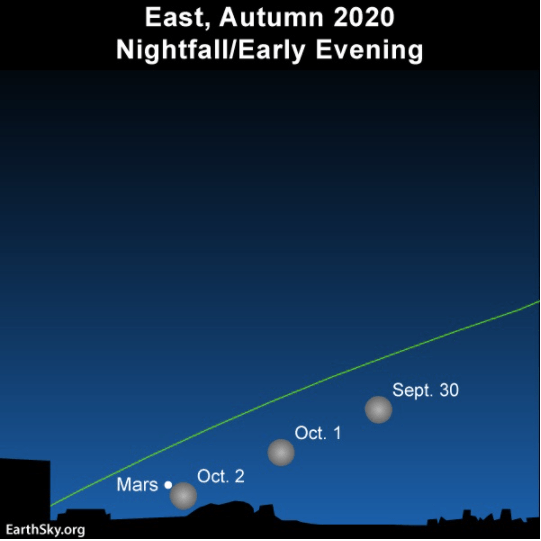 Mars will come into opposition on October 13, which means that this week, the red planet will be rising near sunset. Mars is only in this particular position every two years, and the next time it’ll be this bright in this spot will be in 2035 — so give yourself a break from the rest of the world at least one night this week and look up.