Ah, finally. It’s time for Apple’s latest operating systems for iPhone, iPad, Apple Watch, and Apple TV to release to the masses. Public betas, be damned. They should, in theory, arrive around 10 a.m. PT today, but there are a few things you might want to do while you wait to get your various devices prepped and ready for their updates.

What to do before moving to iOS 14/iPadOS 14

First, and most importantly, I’d check to see if your device can even run Apple’s latest operating system, or else this will all be a moot point. Here’s a quick list of compatible devices:

Assuming your device is on the list, you should next make a backup of your iPhone or iPad. In a perfect world, your phone or table should have already been doing this and sending said backups to iCloud where they live until you need to call on them when disaster strikes. You can check this, as well as the last time a backup was made, by pulling up the Settings app, tapping on your Apple ID, and tapping on iCloud. Then, scroll down a bit until you see “iCloud Backup.” It should be enabled, assuming you have space in your iCloud storage for a device backup (or two).

Tap on it, and you’ll see the last time your device backed up right under the “Back Up Now” link: 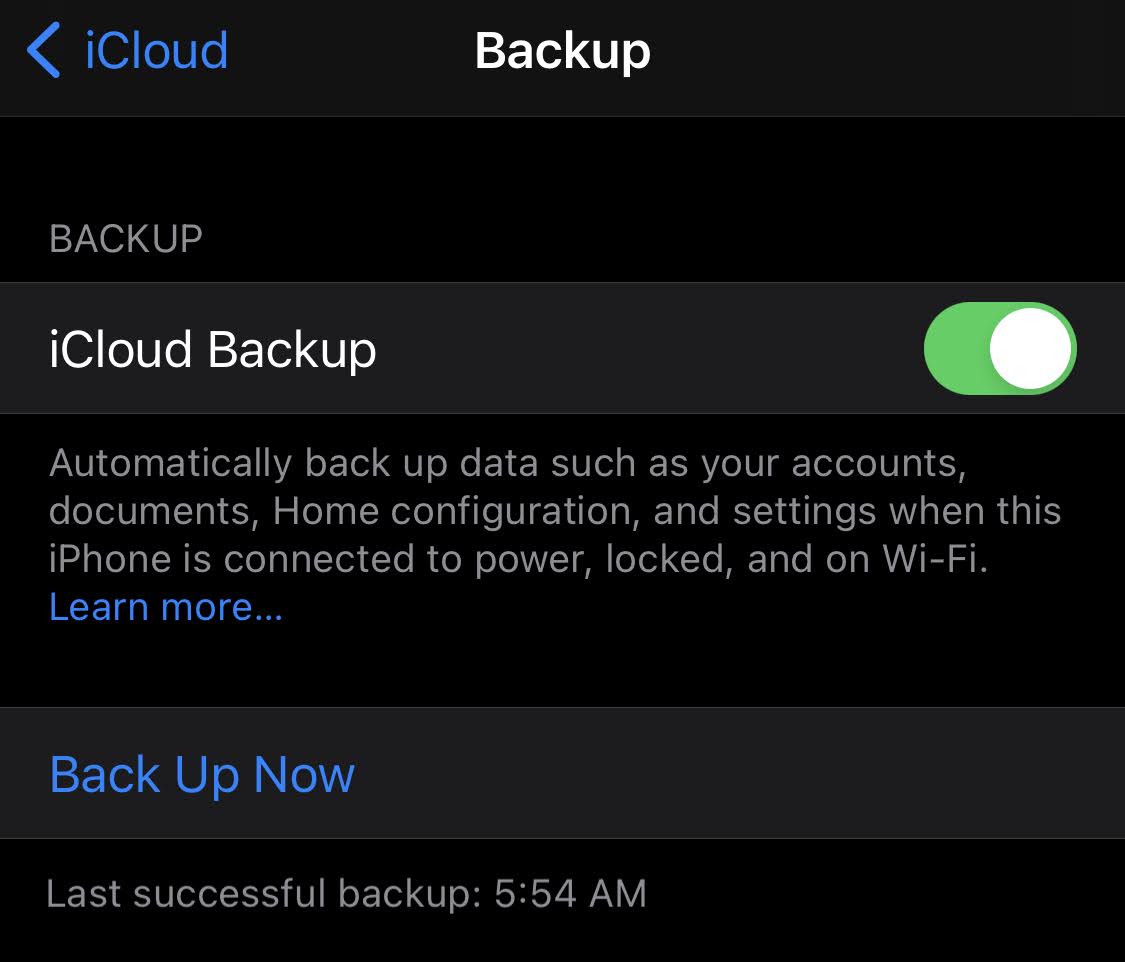 Tap “Back Up Now” to start another backup, ideally close to when you’re about to install iOS 14 or iPadOS 14. Make sure you’re connected to your home wifi before you fire it up.

You can also connect your iPhone or iPad to your computer and run a backup via iTunes — your choice. It’ll save you data, at least.

While this should cover you in the event that an operating system update totally screws up your phone or tablet, you can also take a few extra precautions. Consider copying all your photos and videos off our device, either by connecting it to your computer or uploading them to a free service like Google Photos. If you have any notes with critical information that you can’t afford to lose, maybe it’s a good time to log into your iCloud account and copy them somewhere else (temporarily or permanently).

Also, consider the timing of your update. If you know you need to use your phone or tablet a lot for work, or have some event coming up that require either for you to participate, you can always hold off on the operating system update. It’ll still be there when you’re done, and you won’t find yourself in a pickle if, for whatever reason, the update has an issue.

What I wouldn’t do is bother cleaning up all your apps prior to installing iOS 14, specifically. Thanks to the new App Library features, you’re going to have all the opportunity you need to clean up your sprawling pages of apps (and you might not even need to uninstall anything if you really don’t want to).

Stop Hoarding Apps With the Help of iOS 14

If you’re updating to iPadOS 14, however, now’s a great time to go through your iPad and think about what you’re using, what you might use, and what you swear you’ll use but haven’t gotten around to launching since you installed iOS 13 last year. Cleaning your iPad of unwanted apps isn’t a requirement for installing a new version of its operating system, but I like to think of the annual update as a quick reminder to do some pruning. It helps keep my device a little less bloated, and I only have to worry about the process once a year.

While iOS 14 or iPadOS 14 is installing, be sure to do a little reading about all the fun new features you can play with, including Sound Recognition and MAC address scrambling, new CarPlay wallpapers, new phone and tablet wallpapers, Back Taps, gorgeous new widgets, anti-advertiser tracking, picture-in-picture mode, setting up a new default web browser, and plenty more.

The iOS 14 officially rolls out this week so you don't have to wait for a new phone to get yourself an upgrade.

What to do before moving to watchOS 7

There’s little you need to do with your Apple Watch before updating its operating system, but I still have a few pointers. First off, you can back it up; it’s not a separate process, rather one that’s wrapped into your regular iPhone backup (with an iPhone that’s synchronised to the Apple Watch, obviously). Do that before you install watchOS 7, and that’ll be a great life-saver in case you run into problems.

In fact, the biggest issue you’ll probably have with a watchOS 7 update is the update itself: It might take a while, especially since you will have to update to iOS 14 before watchOS 7 (if I’m right). Make sure you’re charging your Apple Watch prior to updating it, that both your watch and iPhone are in reasonable proximity to one another (and good wifi), and make sure you don’t need to use either for some time. Though today’s update is likely to drop early in the morning (Pacific Time), you might want to wait until bedtime to kick off the update process. I trust you don’t use your iPhone while you sleep.

Though it probably won’t be an issue, I like to uninstall beta profiles on my devices before installing a new, final iOS or iPadOS update. I have sometimes found that my iPhone won’t see the new final release if I’m still enrolled when everyone else gets the update. So, to make sure I’m hammering Apple’s servers at the same time as everyone else, I usually ditch the beta profile in the early hours of a new operating system’s launch day. You don’t have to do this unless you really want to, but if you don’t happen to see the primary iOS or iPadOS update when everyone else says it’s live, this could be the reason why.

What about my AirPods Pro? I want Spatial Audio!

Relax, grasshopper, there’s no setting you can tap to force a firmware update for your AirPods Pro. You’ll have to jump through a myriad of hoops to potentially get an update to trigger, and it might not work.

According to Apple support these are the steps for updating AirPods firmware 🙂 pic.twitter.com/H55kQtMVFE

If this doesn’t help, just, well, keep using your AirPods Pro. You’ll get Spatial Audio eventually — and the ever-more useful “automatic switching” feature that makes it even easier to use different Apple devices with your AirPods Pro.