Get a Free Copy of ‘Serious Sam: The First Encounter’ Today

It seems there’s always some new, free game for you to grab. And while you might not be super-invested in a wacky first-person shooter from 2001 — that’s Serious Sam: The First Encounter — I’m not going to deprive you of a nostalgic kick, especially when there’s little else to do during the pandemic and this is a great, free way to waste an afternoon.

But let’s be clear: The first game in the Serious Sam franchise is old and the graphics aren’t amazing, but it’s still a pretty wild trip that evokes the silliness and mayhem of a Duke Nukem 3D without any strippers or piss. I mean, at one point — very soon in the game, I should note — you’ll find yourself shooting decapitated people with bombs for hands. And it just gets weirder from there.

The first time I played this game many, many years ago, I recall thinking, “I would love to know how they developed this one.” I mean, do you just go into an office, load up on sugar, and write anything that comes to mind on your “dev ideas” whiteboard? Do you go throw a dart at the wall and whatever weird topics you hit, that’s what you toss into your game? Does one make up these ideas as one goes along, allowing them to get more and more absurd as deadlines mount? 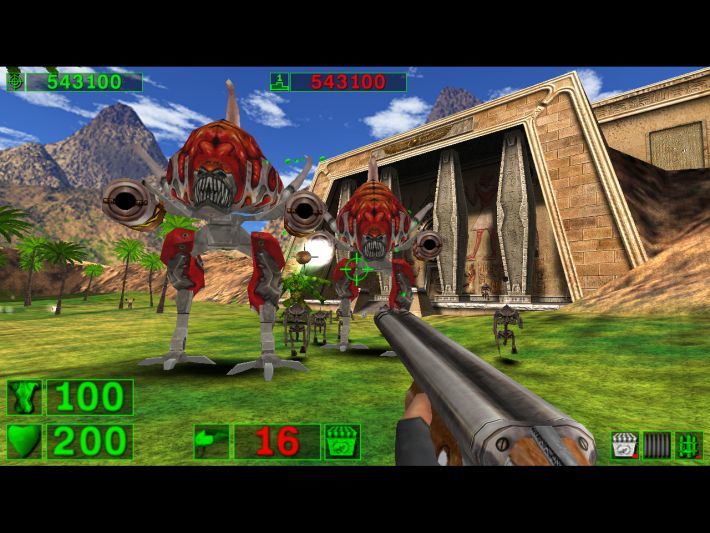 What I appreciate most about Serious Sam: The First Encounter, beyond its silliness, is that the game’s levels just feel so sprawling. They aren’t very complex, they’re just big. You’ll find yourself learning to love strafe-circling as you run around a gigantic courtyard, shooting everything that’s trying to follow and blow up at you. If I recall correctly, the game’s final boss is literally a giant four-armed beast…thing…that you fight in front of a giant pyramid — as if Goro from the Mortal Kombat franchise needed to do a bit of moonlighting to support a growing steroid addiction.

That’s my pitch. Serious Sam: The First Encounter won’t wow you graphically, but it’s a great little time-killer, especially if you find yourself saddled with an older system because everyone else in your house is using newer desktops or laptops. Or, hey, if aeroplanes are ever a thing that we all use again, throw it on a laptop and see if you can make it through before your flight lands.

Your options are limitless, but your ability to download the game is not. The free version of Serious Sam: The First Encounter goes away at 11:00 p.m. AEST on Wednesday, August 26. Add it to your GOG account, and you’ll be able to download and play it whenever you want.