Why Do My Download Speeds Differ So Drastically Between Computers?

In a perfect world, you’d pay for super-fast internet service, connect your cable modem to a reasonably speedy router and realise incredible download speeds for every device in your home. Unfortunately, we live in the real world, which often paints a much different picture.

In the real world, you overpay for data-capped “unlimited” internet service and end up renting a cable modem from your ISP for even more money. It’s a router/modem hybrid that gives you a so-so connection for your many devices throughout… well, part of your house. You ponder what it will take to get a wireless connection to cover the dead spots and end up buying a crappy extender that helps you achieve a fraction of the speeds you’re paying for. You wonder why this is so complicated.

Lifehacker reader Jon might not have quite as bad of a setup as this, but his question for this week’s Q&A reminds me we live in a world in which a regular person has to jump through a hell of a lot of hoops to (maybe) set up a speedy internet connection. He writes:

I have 2 PCs connected to the same new, managed Netgear switch. All my gear is 1000Gbps capable. As an example, here are two screenshots of speedtests I ran on both PCs: first PC1, and then PC2.

I’m not understanding the huge speed difference between testing on same subnet via same router/cable modem? 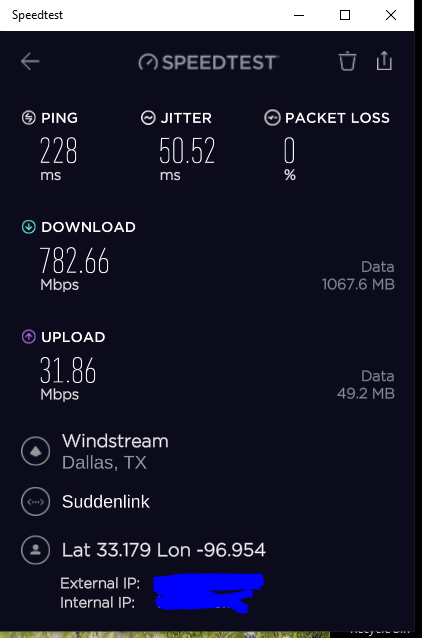 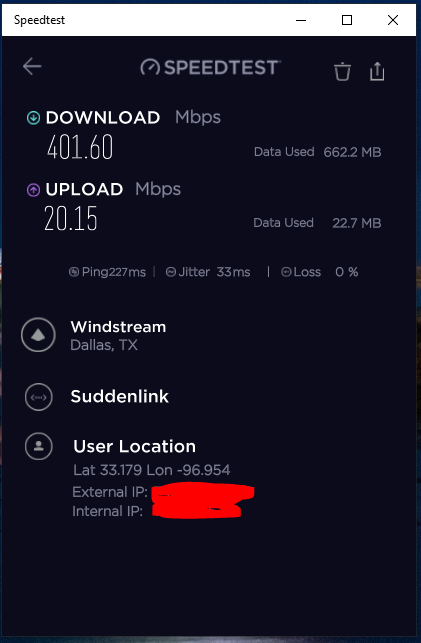 Troubleshooting underperforming networks can be a PITA

Jon actually sent me a lot more detail about the various things he’s already looked into in order to max out the connection speeds on his 1Gbps internet plan. (It’s a lot! Two cable modems, two mesh systems, lots of Ethernet and coaxial cable. A lightning strike. It’s quite a story.) For the sake of brevity, however, this is his problem at its root: inconsistent performance, even on a wired connection.

At least, I’m assuming wired. Let’s just get that out of the way first: If PC #1 is connected via Ethernet and PC #2 is connected via a wireless card, that’s your problem right there. It’s a lot trickier to get a consistent, incredibly fast signal over Wi-Fi ” there’s the resulting speeds, something I’ve addressed in numerous columns.

It’s also possible that the speed test is reporting different results simply because… they do. However, it’s strange to see such wildly different results from the same speed test accessing the same theoretical testing location. I presume you’ve run the test quite a few times and seen consistently large differences in performance between your two PCs.

What I might do first is try a few other speed tests in case there’s some kind of aberration with Speedtest. I’ve always liked using fast.com, but there are plenty of others. You want to determine if you’re seeing the same crazy variance between your two systems across multiple tests. If so, we can start to narrow down our troubleshooting to something potentially related to the ailing system. If not, or if the results invert, then you’ll probably want to take a step back and consider some general troubleshooting (or just dealing with the odd variances).

For the sake of argument, let’s assume that your various tests indicate that PC #2 is still slower than PC #1. There’s a lot we can do to try to fix that, so let’s dig right in.

Start by swapping the Ethernet cables the two PCs use ” or connecting via another new, cheap Cat 6 cable. Perhaps the network cable you’re using on your slower PC is having an issue. It could also be rated too low for the distance you’re using it (and the speeds you’re hoping to achieve). You might even have a loose connection of some sort. Try a different cable. Run your tests. See what happens.

I presume that PC #1 and PC #2 are both connected to your router the same way. If PC #1 has a direct Ethernet connection but PC #2 is connected to a powerline adaptor, which is how you manage to give it an internet connection without stringing Ethernet cable all around your home, that’s probably where the bottleneck is. When you’re running your tests, make sure you’re connecting directly from router to desktop.

Don’t forget to reset everything on your network before running your speed tests. Reset your modem, your router, your PCs and any other devices between the two ” even power cycle any switches you’re using as part of your network, (something that I’ve had to do to get my Ethernet-connected desktop PC’s speeds back up again.) Yes, switches are generally dumb, but they can act up sometimes.

If this hasn’t fixed the issue, dig deeper. Try connecting your Ethernet cable(s) to different ports on your switches or router. Does PC #2 have a second Ethernet port you can use? Try that and see what happens. There’s not much else I can think of as far as hardware goes ” unless you’re using some kind of discrete networking card or USB adaptor to get an internet connection on PC #2, which could also be your point of failure.

On the software side of things, check to see whether there are any firmware updates you can install on your modem, router, switches or motherboard ” to name a few. It’s possible there’s an update that has fixed a defect that’s otherwise costing you speed. It’s also possible that one setting or another has malfunctioned, and flashing updated firmware (which typically reverts your settings to factory default) can help fix that.

Otherwise, consider resetting your modem to its defaults, then your router, then possibly even your BIOS and/or operating system. Yes, it’s the “wipe everything and reinstall” approach, an option I’d recommend as a last resort, but one that’s always on the table for you to try. (Are there any strange networking-themed apps on your system that you don’t recognise or don’t use? Uninstalling them might help.)

Check to see if your PC’s (or your network interface’s) manufacturers have provided any updated drivers you can install. While I’m not convinced that’s what is causing your slowdowns on your second PC, it’s an easy fix to explore. While you’re at it, update the DNS settings on PC #2 to something speedier (like Google DNS or Cloudflare) instead of whatever you’re getting from your ISP.

You can also try resetting your TCP/IP stack by opening up a Command Prompt as an administrator and entering the following:

I wouldn’t suggest buying anything new until you’ve exhausted all your troubleshooting options. If you happen to have a friend with an Ethernet adaptor you can use, see if that improves your speeds at all. A cheap PCI-based or USB-based one is fine, though I always prefer the former, as it offers less potential for complications. (Thankfully, if you have to buy one, a decent gigabit card can be had for less than $30 ” a small price to pay to double your internet speeds.)

That’s all I can think of, though. Hopefully one of these techniques will solve your tricky issue. Even if they don’t, though, 400Mbps on one system isn’t too shabby. I know it’s not the 700+ Mbps you were hoping for, but you’ll only really notice the slowdown when you’re downloading huge files. Otherwise, if there’s any silver lining toÂ be found in this problem, I would expect that latency (and DNS) will impact your typical web browsing experience more than this speed difference.