Should You Sign Up for Chromebook’s 100GBs of Free Dropbox Storage?

One of the best parts of buying a Chromebook is perusing all the deals Google dumps on top of your purchase. (You do know about the deals, right?) Admittedly, a number of these “perks” are actually extended or souped-up trial offers aiming to get you hooked into a subscription you might not otherwise have purchased, but that’s no reason to not take advantage of them while you can.

Case in point: You can now get 100GB of free Dropbox storage for a full year with any Chromebook purchased before July 23, 2021. Admittedly, I have no idea how far before that means — it’s likely your years-old Chromebook is too old to partake in this fresh deal — but Google doesn’t specify this in the deal’s terms, and it only takes a click to see if you’re eligible, so why not check? 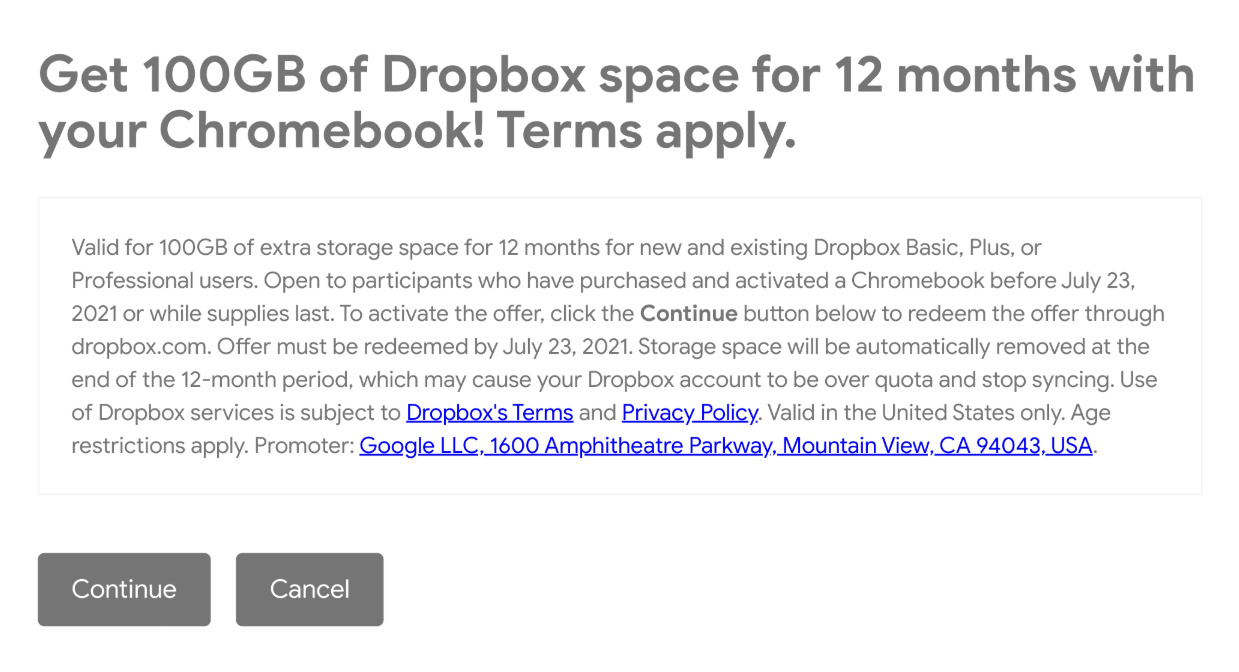 Of course, do you really need Dropbox when Google itself is offering you 100GB of storage via its Google One service for the same amount of time? That’s your call. Whichever deal you go with, though, make sure you mark a date on your calendar one month before your year-long trial ends.

Why’s that? Because it’s a genius marketing move to give you a free 100GB to fill. If you were only storing a few files and photos on your Dropbox, for example, you might not be so inclined to stick with (pay for) the service at the end of your trial. Fill your Dropbox (or Google One) account with 98GB of files, however, and you might find that it’s more of a pain in the arse to lose access to them than it is to pay for the cloud storage service.

If you really, really take advantage of either company’s offer, it might feel you’ve pre-committed to paying for a subscription. And once you get that fateful “Hey, it’s time to subscribe or you’re going to lose access to everything” email a few days before the trial runs out, the premise of paying $US10 ($14)/mo for uninterrupted service will feel less daunting. That’s how they get you.

Instead, by taking some time to review what you’ve dumped in your cloud storage weeks before your subscription ends, you’ll have ample time to make all the moving arrangements you need. Or, at minimum, you’ll have some time to do some shopping and pick the cloud-storage service that’s best for you (even if that ends up being Dropbox or Google)

There are better Chromebook offers than free trials

Of course, you could also ignore either Chromebook offer and go for something less mentally draining. As of when we published this article, Chromebook owners can also pick up a free copy of Doom II — so old a game that it used to come on floppy discs — as well as a free copy of The Fall of the Dark Brotherhood expansion for The Elder Scrolls: Legends digital card game. (Another meh offering.)

The real gems, though? You can get a free copy of Stardew Valley, the farming-slash-life simulator that I don’t even want to know how much time I’ve spent playing. Google is also offering a free version of the helpful Duet Display app that lets you use your Chromebook as a second display for your Mac or PC.

I probably wouldn’t go for Google’s other offers — again, mostly trials that want to hook you into a subscription. Everyone needs storage though, especially if your Chromebook didn’t come with much on its own. And everyone loves digital farming. Right?