How To Permanently Delete Books From Your Kindle

Removing books you’ve finished from your Kindle has always been possible, but with one catch. Whatever you remove from your device persists in your account. It’s not gone forever, it’s simply gone from the specific Kindle device you’re using.

You likely caught on to that caveat the first time you pressed-and-held your finger on a book on your Kindle and tapped the “Remove From Device” option. However, a brand-new Kindle update is finally giving users the power to remove books from their collections directly from their Kindles—a power you’d previously could only find in the iOS or Android Kindle apps (albeit in limited fashion).

As noted by Nathan over at The eBook Reader.com, the recent Kindle 5.12.5 software update, released in late April, adds this feature. You’ll now see a new “permanently delete” option when you’re holding your finger on a book title, just as you would have done previously to remove it from your collection. Tap that option, confirm your decision to delete it, and the book will disappear from your account. (Meanwhile, the “Remove From Device” option has been renamed to “Remove Download,” so don’t get confused by that change, either.)

Previously, to remove a book from your account, you would’ve had to pull up your Amazon account on a desktop web browser, click on content you no longer wanted, and delete it that way. 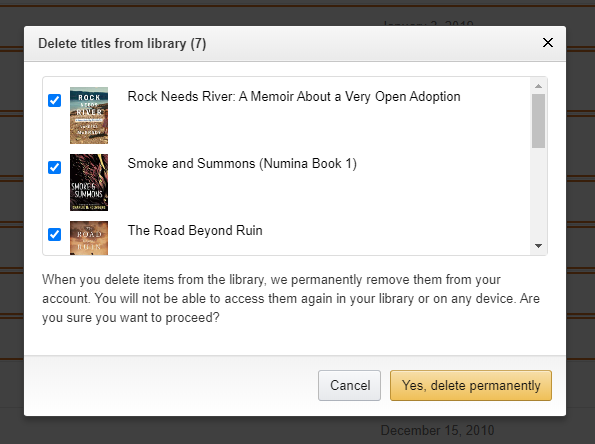 Or, you could’ve used the Kindle iOS or Android apps to delete items permanently, though that only works with free or sample content you download or items you side-load into your library.

As for the 5.12.5 update, you should have received that by now if you’ve connected your Kindle to Wi-Fi at any point since April. If not, you can always download and install the update manually. Before you go that route, though, it’s worth checking to see if your device already has version 5.12.5 installed —or if it even supports it to begin with.

If you don’t see the “permanently delete” option after the update, it’s possible that you’ll have to wait for Amazon to enable this for your device on its end. Feature rollouts are great, aren’t they?