The Kati Roll Casserole Is A Spicy Masterpiece 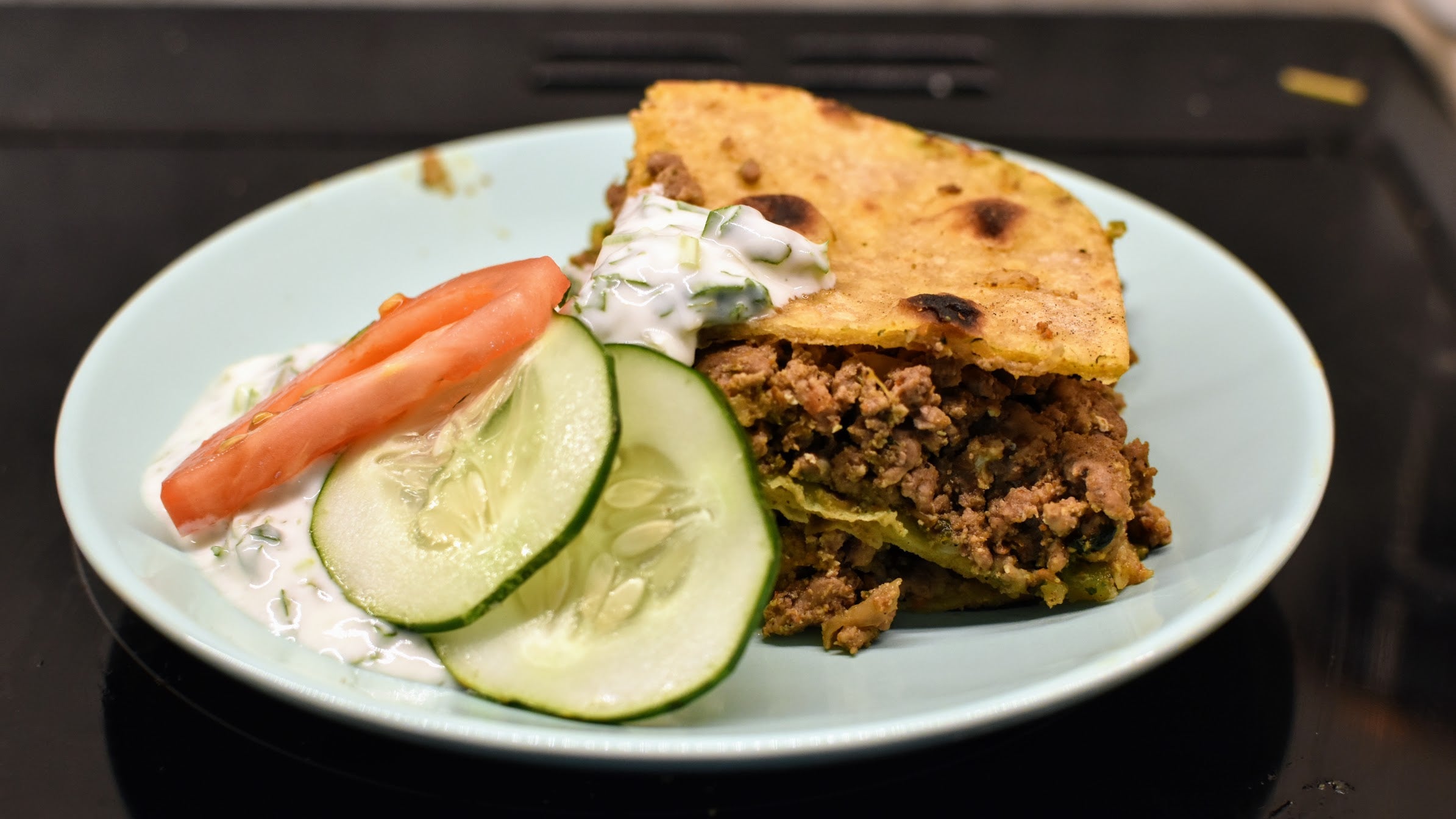 Sometimes, Indian food collides with other cultures. Like when I put a slice of American cheese on a poori and microwave it for a delicious multicultural snack (a staple of my childhood), or eat leftover takeout biryani with ranch dressing on the side, because I ran out of raita and lacked the ingredients and will to make it myself. (I’ve done this several times, but this is my first time admitting it.)

No cuisine exists in a vacuum, which is to say I think it’s ok to make Indian food into a casserole, and the kati roll is the perfect candidate. I come from a place of dual non-authority: I have never made a kati roll, nor have I ever made a casserole. But I’ve eaten dozens of kati rolls, and I’ve come to understand that casseroles are an all-encompassing genre far beyond green beans bathed in a can of mushroom soup.

The beloved kati roll, which contains some kind of ground meat (or chicken, or paneer), usually with egg mixed in, and comes wrapped up with onions and chutney in a paratha (a thin, layered Indian flatbread), lends itself extremely well to being opened up and layered in a casserole dish.

I decided to make an accompanying raita for the casserole, even though a typical kati roll does not include it. I prefer my food to be very spicy, and like to have some kind of creamy cooling agent to balance it out. (This is common across many cuisines, the white sauce of halal carts, the blue cheese with buffalo wings, tzatziki on gyros, etc.) This further mars the authenticity of the dish, but I believe going against kati roll canon will be worth it in the end.

In terms of the ingredients: you might have to supplement your usual spice rack with some Indian options, but if you do acquire them, take solace in the fact you’ll be able to use them for many other dishes. Ginger garlic paste can be used as a building component in any stir fry, and parathas are one of the top-rated ways to scoop up curry or dip. The rest of the ingredients are pretty universal, and you can probably figure out what to do with them without any prompting. 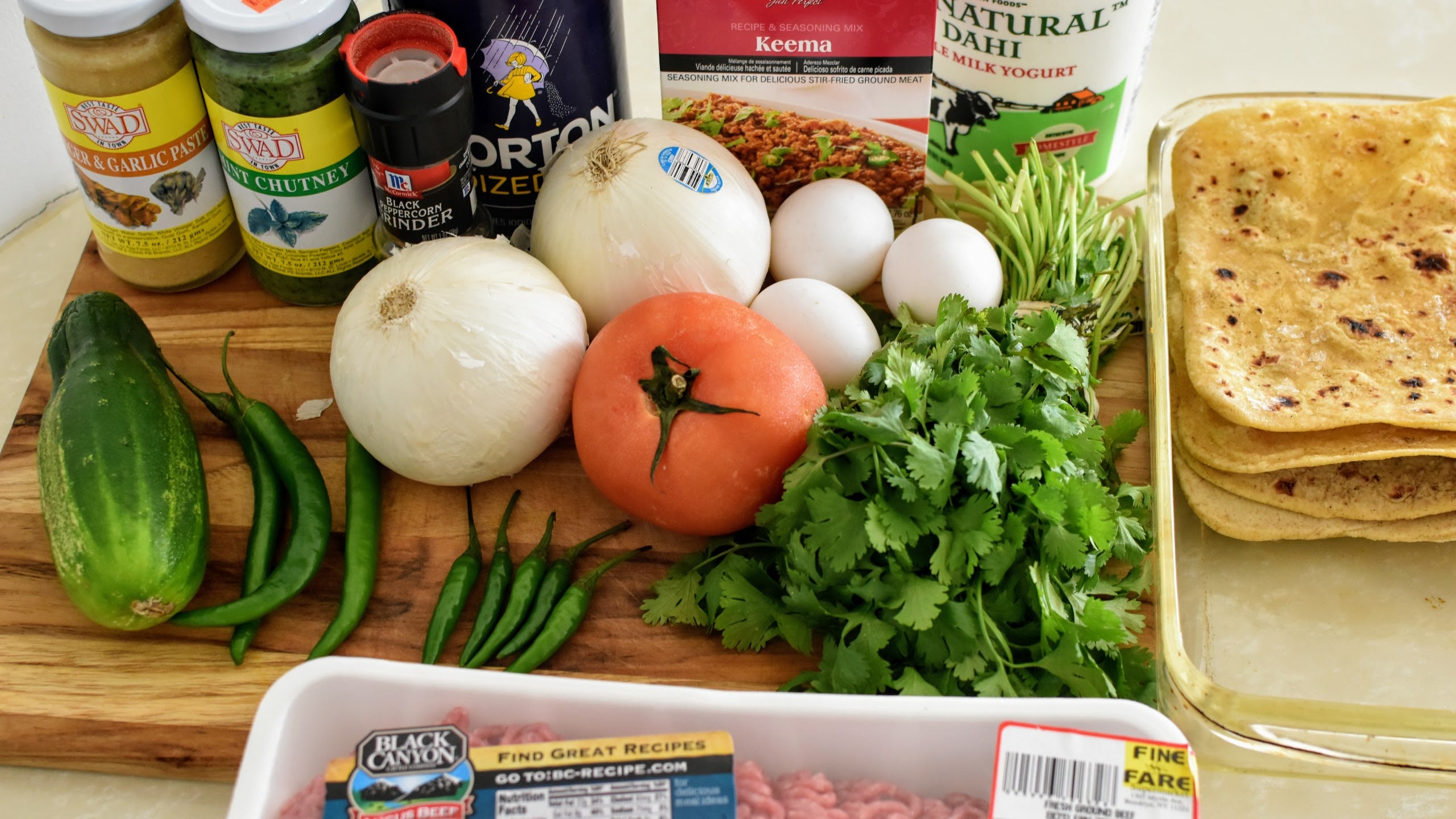 Health-wise, this is probably not something to brag to your doctor about eating, but I am not a good judge of such matters. You can, however, tweak the recipe by using leaner/less meat, and/or low fat yogurt and still have a very delicious result. To make a kati roll casserole, you will need:

Dice the onion and heat up a few splashes of olive oil in the pan. Once hot, sauté the onions. You can absolutely use more onion, and in my opinion, the more oniony the dish, the better. It adds a nice texture, and you can use less meat, which embodies the true Indian spirit. Once onions are looking transparent-ish, add the ground beef.

While the beef is cooking, cut your tomato in half. Set one half aside (for garnish purposes) and dice the other half. De-seed and finely chop the small green chillies. Chop half of the coriander.

When the beef is browned and there are no visible pink bits, add the diced tomatoes, chopped peppers, and chopped coriander. 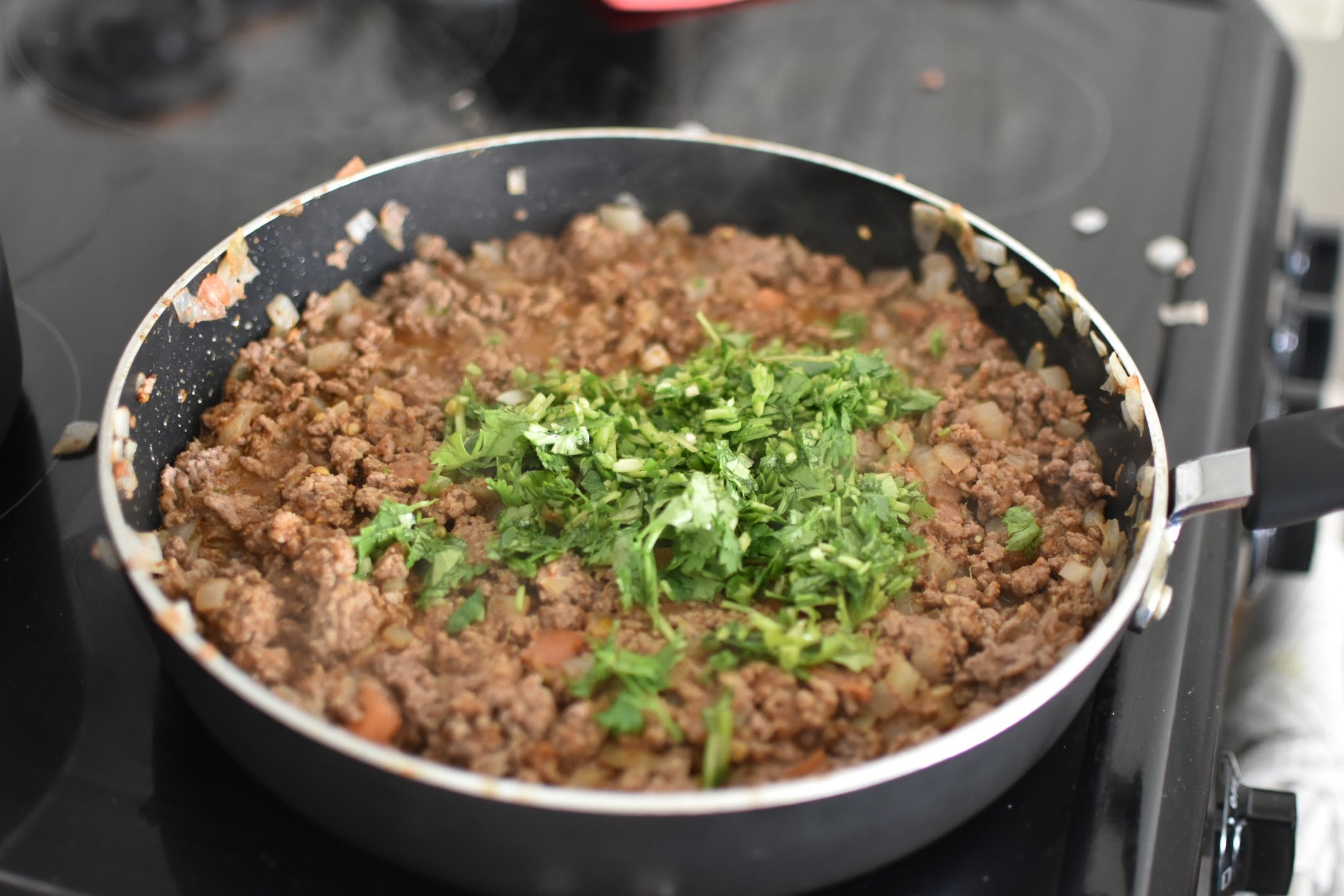 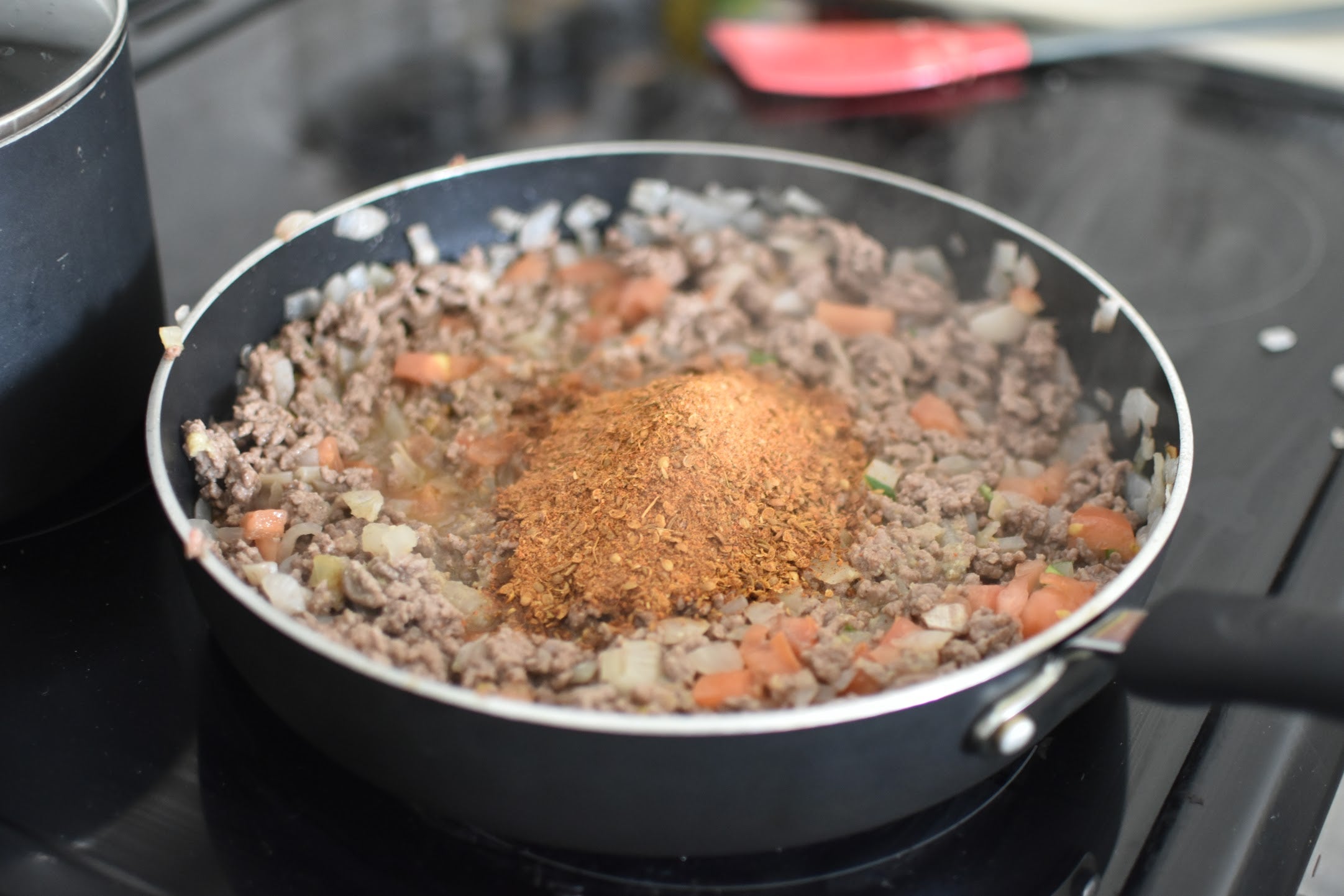 After most of the liquid has cooked down, crack three eggs directly into the pan and mix them in, so little white/yellow flecks are visible in the meat—this part should only take a few minutes. Once the egg has cooked, keep the pan on very low heat. At this point, take a taste, and add any needed salt, because you haven’t done that yet. 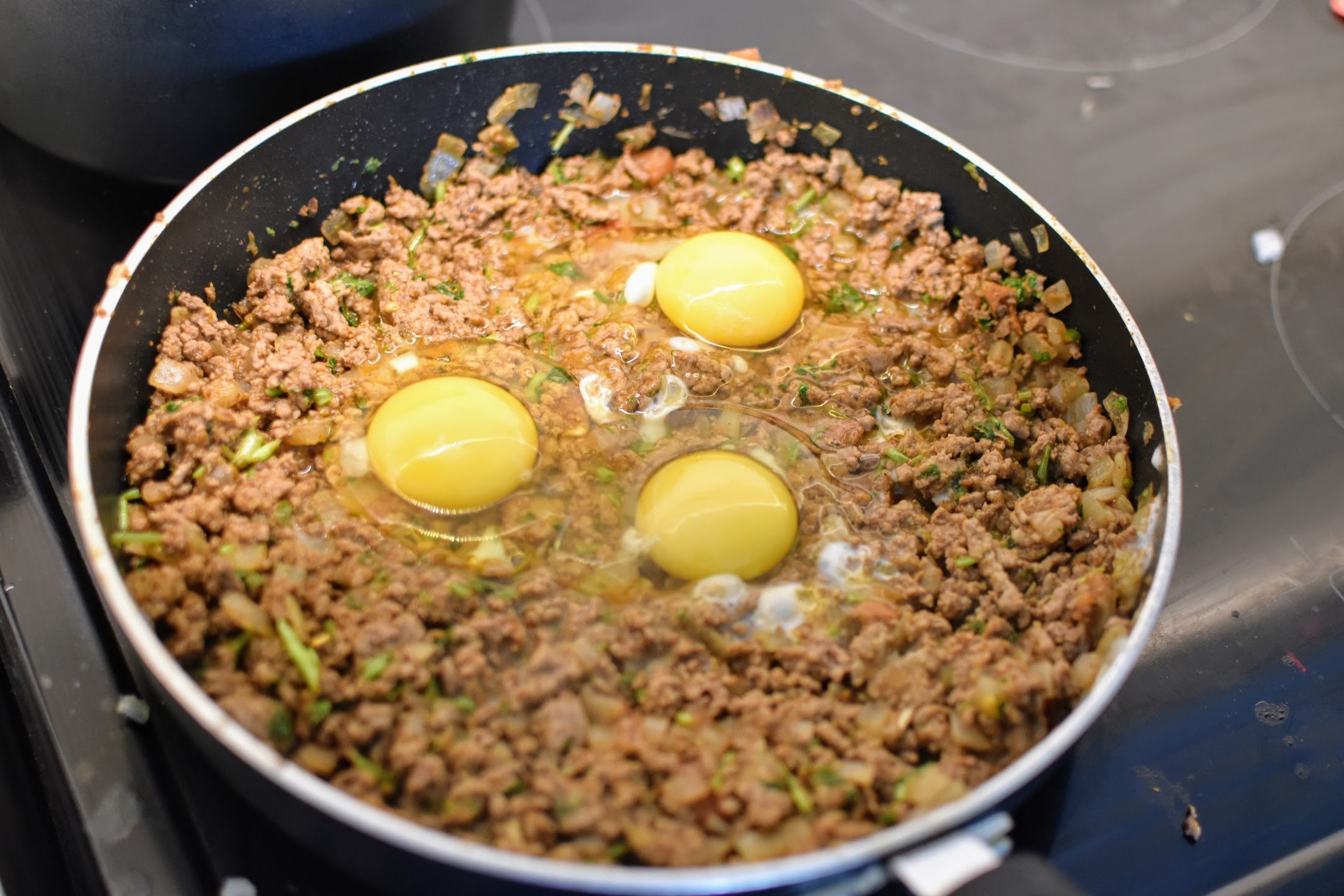 Preheat oven to 175 degrees Celsius. Take the casserole pan, and spread a little butter or ghee on the bottom of the pan. Add two parathas to cover the bottom of the pan. Add a layer of meat, roughly a quarter-inch thick, smoothing it down with a spatula or large spoon. Don’t over-do it with the meat layer. If you have extra, this meat mixture is a perfect sloppy joe mix, or a delicious fusion dish just waiting for some crushed tomatoes and pasta. 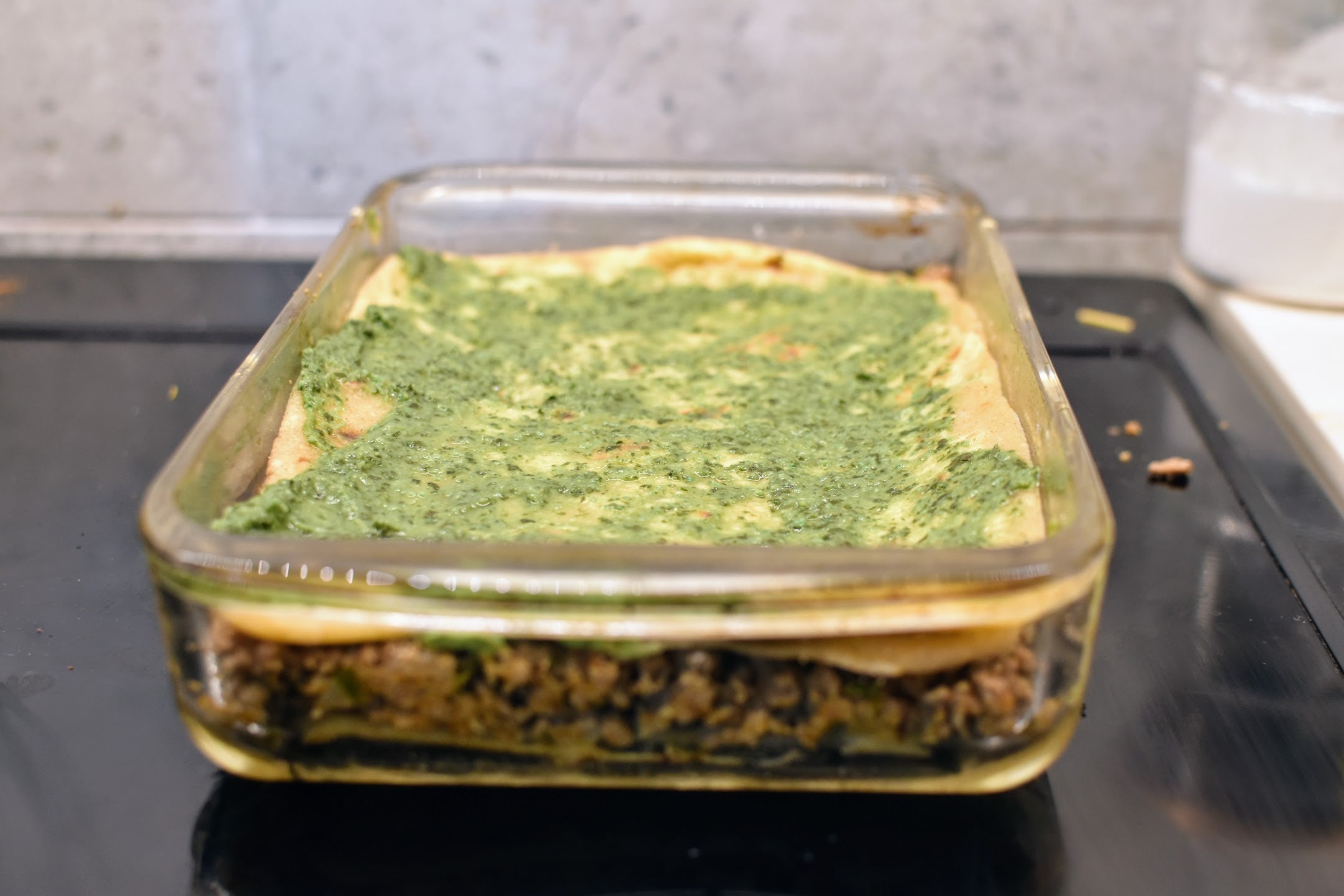 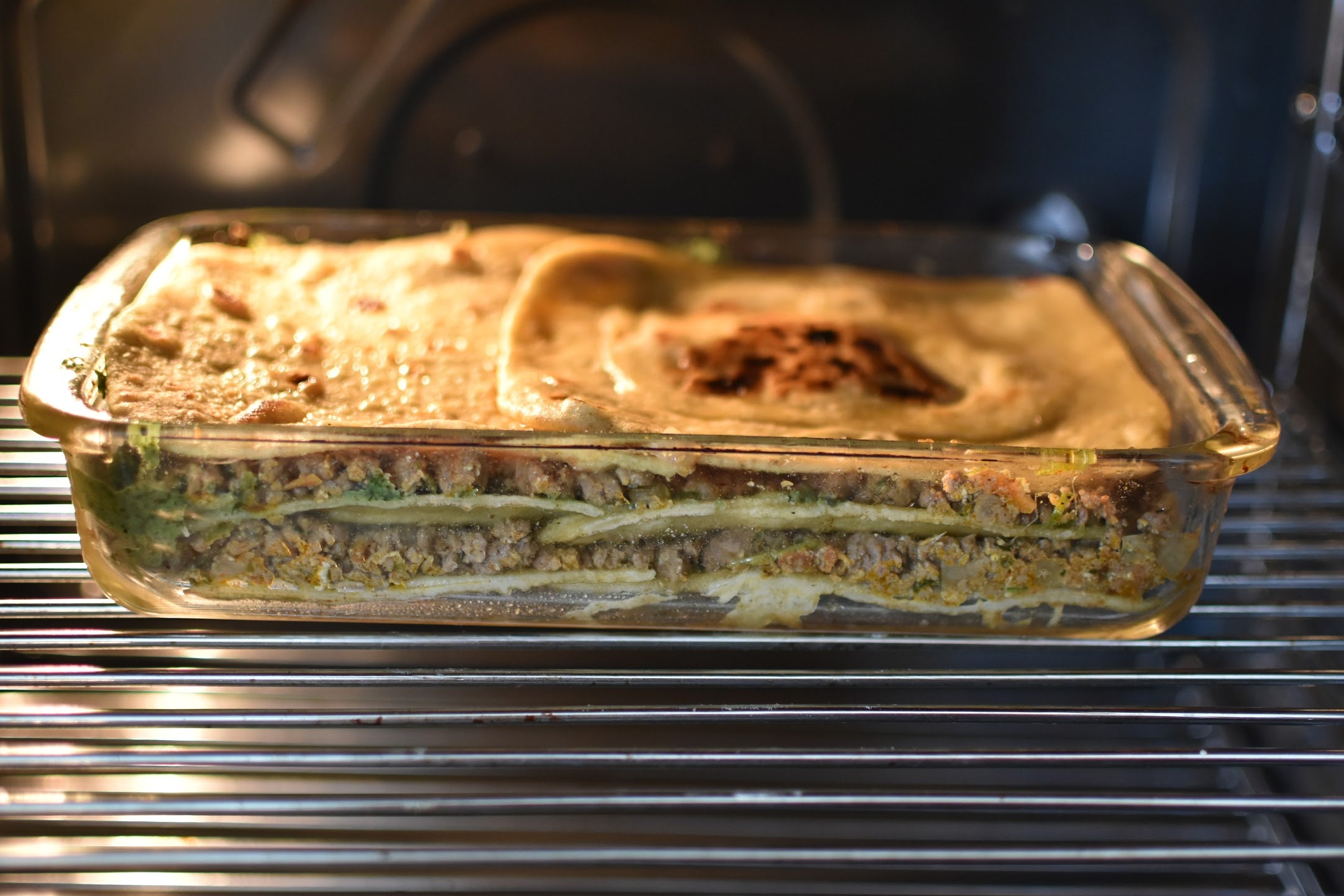 The whole thing in the oven (Photo: Ashwin Rodrigues)

Now, for the raita. 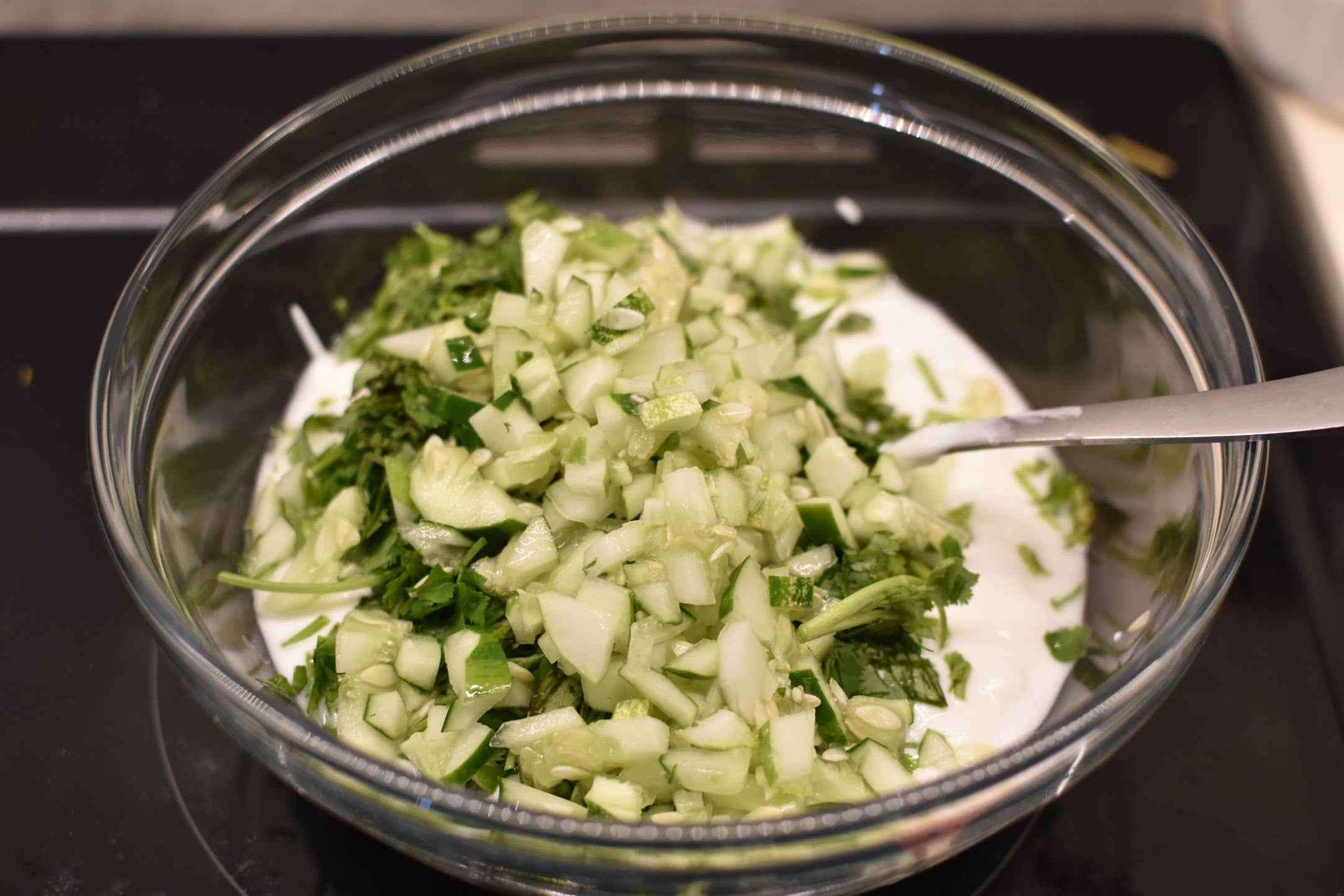 Add the yogurt to a mixing bowl. Chop the remaining coriander, two medium green chillies, and half cucumber. Add these to the yogurt. Mix away, then put it in the refrigerator. The raita is done. 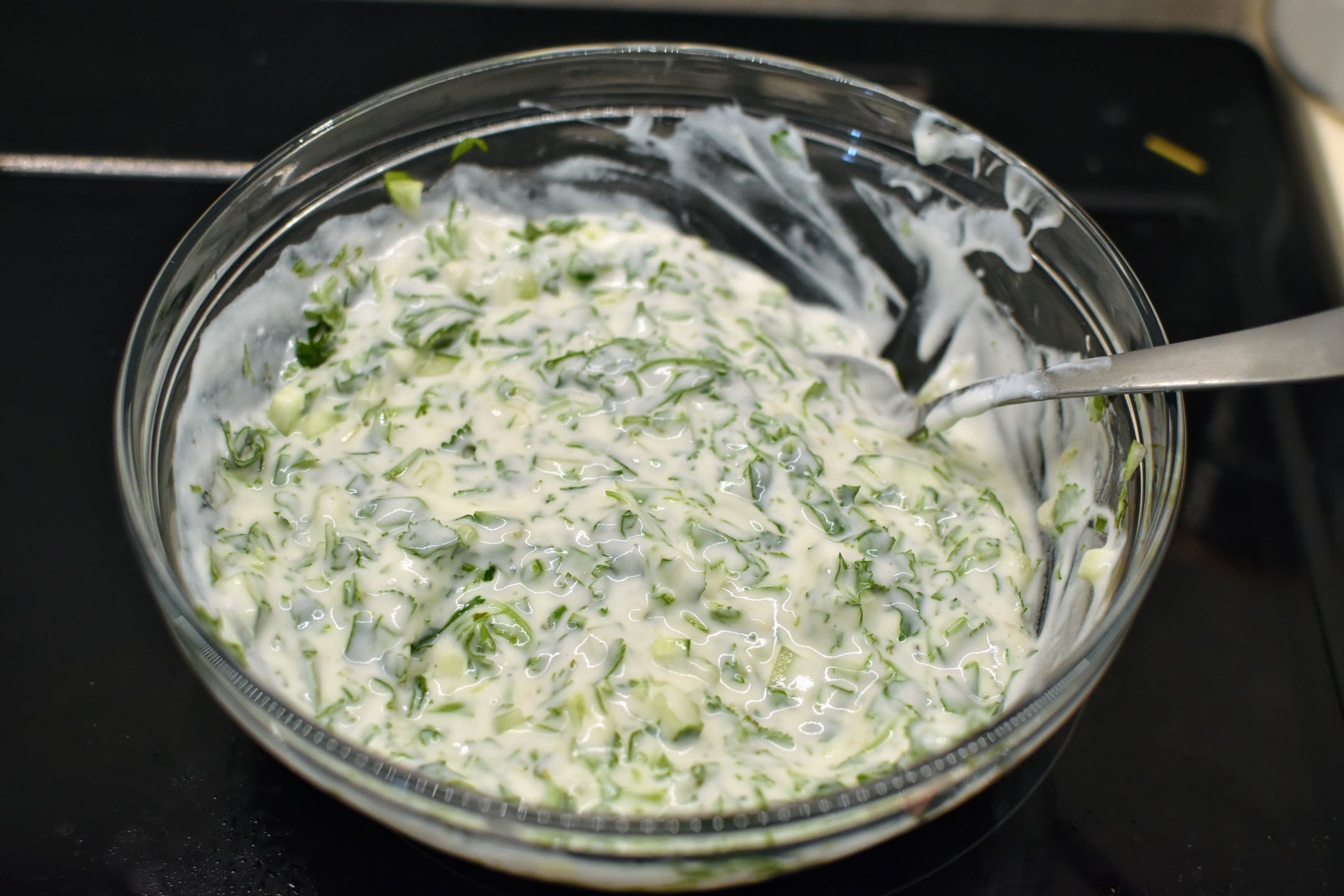 Around 10 minutes in, you might notice your top layer of parathas have curled up. Flip them over, so now they are curling down, and let the casserole keep cooking for another five minutes. Now it’s done. Remove it from the oven and let it rest for ten minutes. Slice and plate with a few spoonfuls of the raita, and some of the leftover veggies. (This makes for a very pretty photo.)

This casserole, by my design, is very spicy. This is offset by the mint chutney, which adds an herbaceous flavour, and raita, which provides a cooling compliment to the dish. In terms of scale, I prefer my food to be almost intolerably spicy, but this amount of heat was substandard in that regard. My girlfriend, who has a lower heat tolerance, found it delicious and not at all too spicy.

After finishing this casserole in roughly two and a half days, I can say it was a success. It was good the day after (and the day after that). All that time in the oven had crisped up the parathas a bit, which prevented the top layer of the casserole from getting too soggy.

The flavours and textures I’d hoped for were all there: chewy paratha (from the middle/bottom layers), spicy, seasoned meat combined with a minty chutney, with the heat offset by a simple but effective raita. Most importantly, I didn’t have any nightmares in which my ancestors called me a traitor or claimed I’d disrespected my family, which was a principal concern. 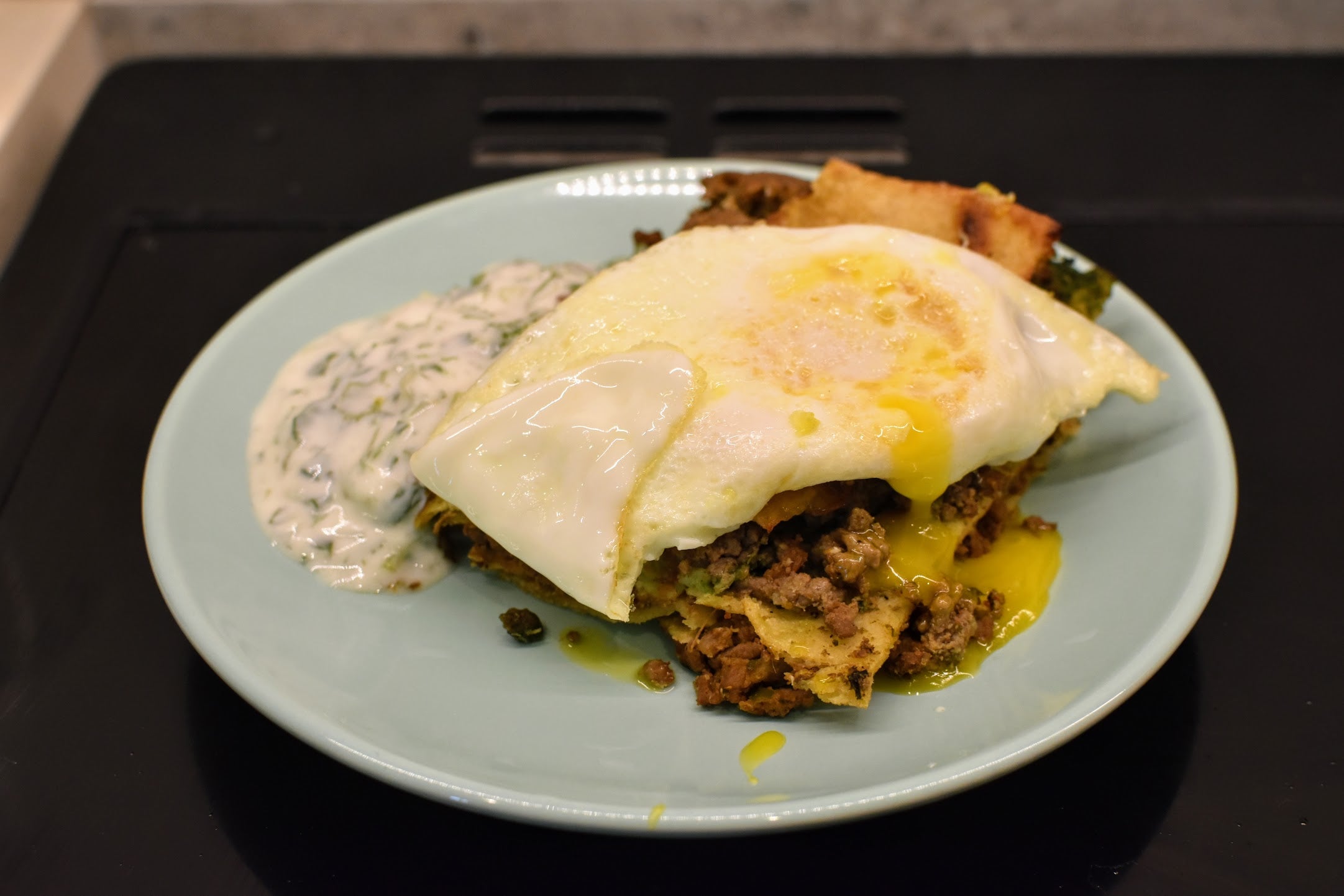 This dish, for me, is a tasty and spicy reminder on the value of experimenting in the kitchen. (This casserole was even more enjoyable the next day. Heated up in the toaster oven and topped with a fried egg, it was the most decadent breakfast I’ve enjoyed as of late.) Authenticity has its place, and I wouldn’t dream of “innovating” certain dishes, like my mum’s dal, or my grandma’s chicken curry.

But I think as long as you approach the concept from a place of respect and knowledge of your references, it doesn’t hurt to try something new. Even further, as an Indian American, maybe placing Indian food in an American vessel is a physical representation of maintaining one’s heritage when placed in a new, unfamiliar container. (At least I could imagine saying that on MasterChef.)

This article has been updated since it’s original publication.