Jigsaw puzzle consumption has increased wildly in the era of physical distancing. People stuck indoors with nothing to do have turned to tiny, brightly coloured, irregularly shaped slices of cardboard to provide them with a sense of control over a chaotic world.

Retailers can’t keep puzzles in stock, and manufacturers can’t keep up with demand; according to NPR, leading puzzle publisher Ravensburger had seen sales spike by 370% year-over-year in the last two weeks of March.

The ongoing Kickstarter for the (admittedly very cool sounding) Magic Puzzles from the Magic Puzzle Company has raised an astonishing $US2.5 ($4) million and counting (full disclosure: I’m a three-puzzle backer). A cursory exploration of the adorably quaint websites of various puzzle-makers the world over reveals that pretty much all of them are reporting shipping delays due to increased pandemic-induced demand. Hell, Ravensburger isn’t even taking orders. 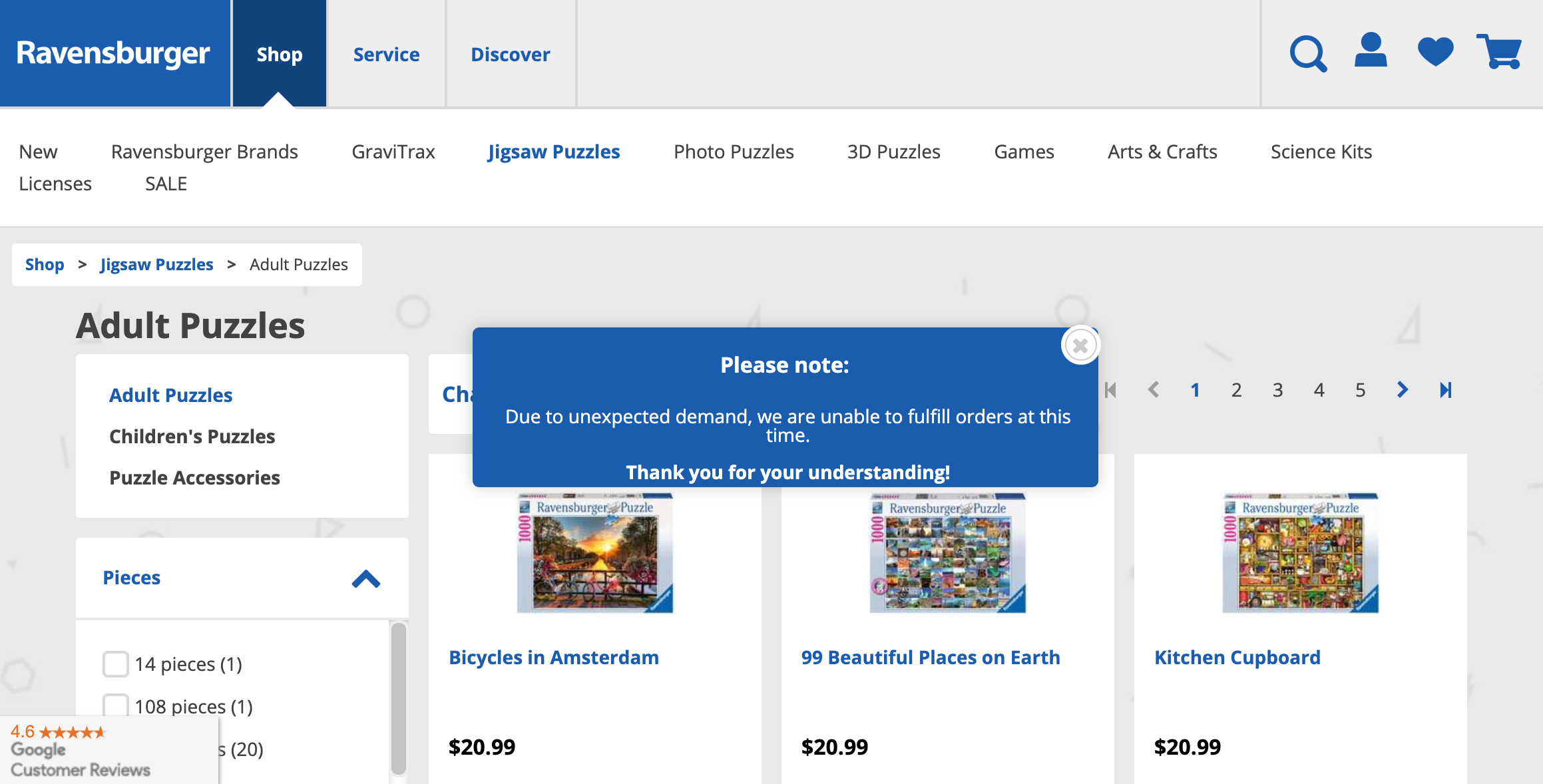 So what’s to be done if you’re desperate to bring order to at least one aspect of your increasingly chaotic life but are either without a stash of suitably challenging puzzles (if you’re over the age of 10, you’re going to want a 500-piecer at minimum) or have already put together everything you managed to haul home from Barnes & Noble before they turned the lights off and locked the doors? You have two choices: You can bite the bullet and finally assemble that slightly off-putting, possibly racially insensitive puzzle your mother-in-law gave you for Christmas a few years back, or you can organise a puzzle exchange with your similarly pieced-out pals.

See, here’s the thing about puzzles: Putting one together is great—I find it at least a relaxing as an hour of yoga, plus I can listen to a podcast at the same time—but once you’re finished with it, the thing is basically useless. Sure, you could paint it with puzzle glue (you won’t) and keep it safe somewhere until you can find a suitably sized frame (you won’t) and hang it up (you definitely won’t), or you can awkwardly leave it crowding the dining table for a week or so until you meekly undo all your hours of hard work by hastily disassembling it, dropping the pieces back into the box, and shoving it into the darkest and most neglected corner of your games closet, never to be seen again, until you accidentally knock it down while looking for a deck of cards and spend the next 15 minutes picking up a gallery of Star Wars posters in roughly 35/1,000th handfuls.

Or—or—you can snap a picture of the completed puzzle (because now you know you have all the pieces), carefully place it back into the box and then transport it to the home of a friend (via approved physically distanced means), where you will receive in return one of said friend’s stock of recently completed and lovingly deconstructed puzzles. As long as you aren’t cramming pieces together like an overzealous three-year-old, a puzzle should last through at least a few lifecycles, meaning you can continue to circulate the things indefinitely.

If you want to get really ambitious, you might set up a group on Facebook or Instagram to which you can invite members of your wider community to share their puzzles, outside of your immediate friend group. If you’re anything like me, you’ve certainly got the time for it—even as the country continues to “open up,” I’m still doing a lot more sitting around. I’ve got nothing but time, and I’ve got my eye on my friend Bill’s collection of Edward Gorey puzzles.