How To Steam A Good Cheeseburger In Your Pressure Cooker

Like many of the greatest minds of my generation, my brain has been utterly poisoned by memes. Although I’m not exactly a discerning meme consumer, I do have my favourites — and I think I’ve watched every iteration of the iconic Simpsons “Steamed Hams” clip on YouTube twice, minimum. (My favourite is “Steamed Hams but it’s Basket Case by Green Day.” No, I will not be taking questions. Thanks!)

What makes this dumb one-off sketch so enduring? Maybe the absurdist humour, which wasn’t really a hit with audiences in 1996, is a soothing balm in this increasingly chaotic timeline. The guy who wrote it thinks it’s because the phrase “steamed hams” is simple enough to catch on. But both of these explanations gloss over the details — what about Skinner’s frilly apron?

The overly confident “steamed clams/steamed hams” switcheroo? The rush of spotting an incredibly rare Albany reference in pop culture? For me, it’s all of the above, plus something else: “Steamed Hams” makes me think about a specific type of hamburger.

Steamed hams — well, steamed cheeseburgers — are totally a thing, just not where I live, in Albany. (We’re not really a burger town.) Found almost exclusively in central Connecticut, they’re one of the most iconic hyper-regional dishes in the United States. A few small diners use custom-built steam cabinets to cook the patties and melt the cheese in individually-sized stainless steel trays. Diehard fans of steamed cheeseburgers insist they’re the juiciest, beefiest burgers on the planet, and I’ve always been curious to try one.

I’m not going to central Connecticut by choice anytime soon, though — sorry! — so I decided to try the next best thing: steaming some hams in a pressure cooker. And wouldn’t you know, it worked. Like, really worked: this is my new favourite way to cook a burger.

Using a pressure cooker isn’t always much faster than other cooking methods, but in this case, it absolutely is. You can steam cheeseburgers for two in ten minutes flat, including prep and pressurising time. If you’re dining solo, make that closer to five minutes. Even better, there’s no screaming hot frypan to deal with, no splattered burger grease to wipe off the stovetop and/or walls, and no waiting around in direct late-afternoon sun for a chimney of charcoal to do its thing so you can eat dinner. It’s the fastest, easiest, chillest way to make a great burger at home.

Simple as they are, I’ve learned that there are a few secrets to steamed ham success. First, use the fattiest ground beef you can find — at least 20 per cent fat. Most of the fat melts out of the burger, but you need some to stick around for flavour. Lean ground beef will actually get tough and dry.

Next, keep the patties on the thin side so they cook evenly. Lots of salt is also key, because most of it dissolves into the melted fat and meat juices. Finally, you don’t need to cook the burgers for very long at all: two or three minutes at high pressure per quarter-pound patty should do it.

Burger styles are a loaded topic, so I’ll make this as clear as I can: a steamed burger is a different experience than a thin, lacy-edged patty or a two inch-thick, medium-rare monstrosity of a chef burger.

You don’t get any Maillard reaction goodness from steam, and it’s nearly impossible to get a perfectly medium-rare patty out of a pressure cooker. If you find the idea of a burger without one or both of those things morally offensive, you may want to sit this one out — but it would be a mistake.

A pressurised steam bath produces a well-seasoned, juicy burger in minutes flat, with plenty of jus to boot. Basting the patty with that jus before adding cheese — which melts to perfection in the residual steam, by the way — is a must, as is toasting the bun in plenty of fat until the cut sides are nearly burnt.

The result is everything you could want from a cheeseburger: loads of pure beefy flavour, the meltiest cheese ever, a little bit of fried crunch from the bun, and all the cleanup of grabbing McDonald’s on the way home. However you dress ‘em up, steamed hams make for a truly unforgettable luncheon. 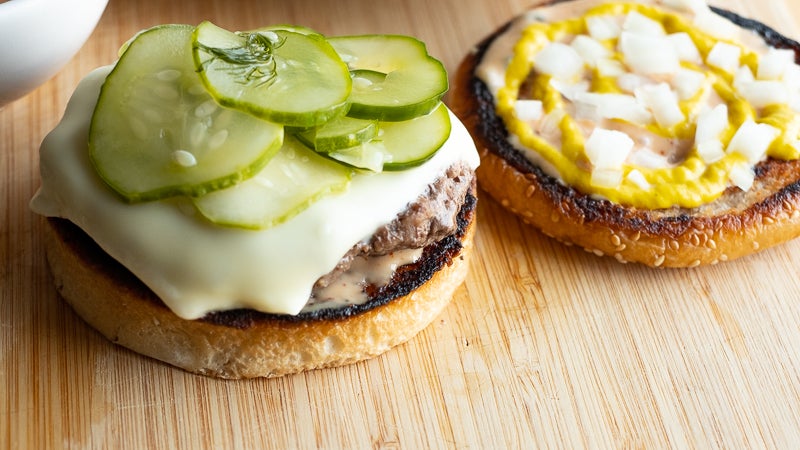 I’ve only tested this with four 113g patties at a time, because that’s what my pressure cooker could comfortably hold. If you want to make more than that, start with a few minutes shy of the “two-to-three minutes per patty” rule and go from there.

Portion the ground beef into 110g balls, then flatten into patties about 1cm thick. Season thoroughly on both sides with salt and pepper and wrap tightly in foil packets. Depending on the size of your pressure cooker, you can either wrap them up individually or put multiple patties in the same packet; they just need to lay flat in a single layer. 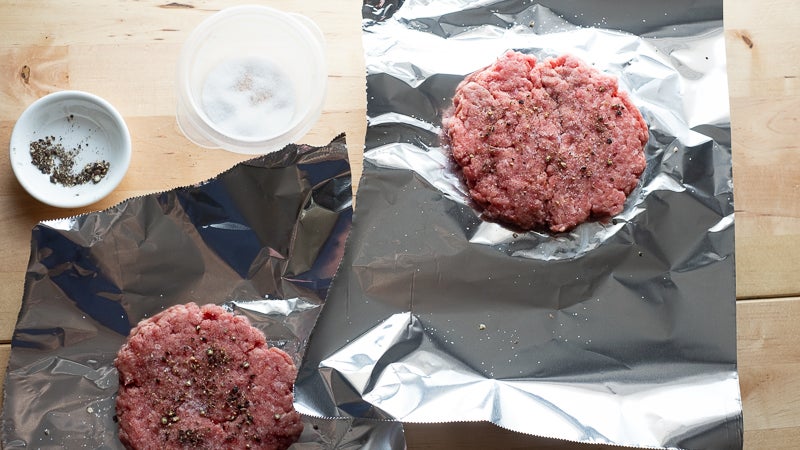 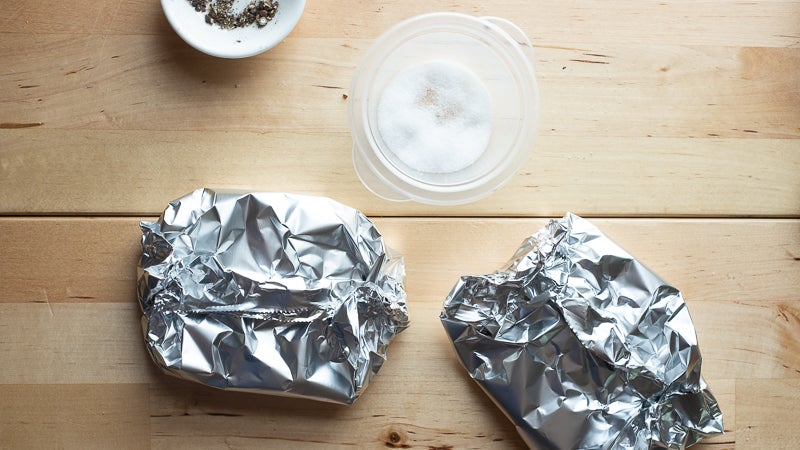 Set a steamer rack in your pressure cooker and add about an inch of water to the insert. Place your parcelled up burgers on the rack, seal the lid, and select high pressure for 2-3 minutes per patty. While they cook, toast your buns well in a cast-iron or nonstick pan over medium heat. Use plenty of butter or oil and don’t shy away from a little bit of charring — this is the only place you’ll get any. 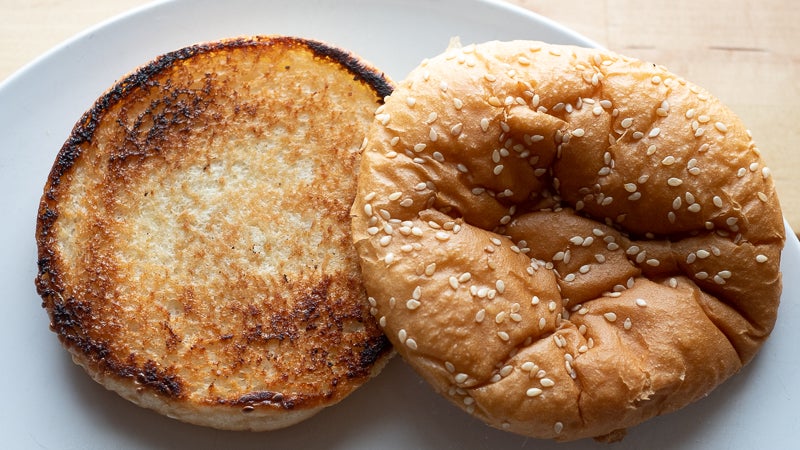 When the cook time is up, let the burgers sit for 2-3 minutes before manually releasing the pressure. Use tongs to transfer the hot foil packets to a plate, then open them up and check for doneness. They should be thoroughly cooked, but it’s possible that the burgers on top could use a little longer. In this case, just re-seal the foil on any underdone burgers and return them to the cooker for another minute or two at high pressure to finish them off. 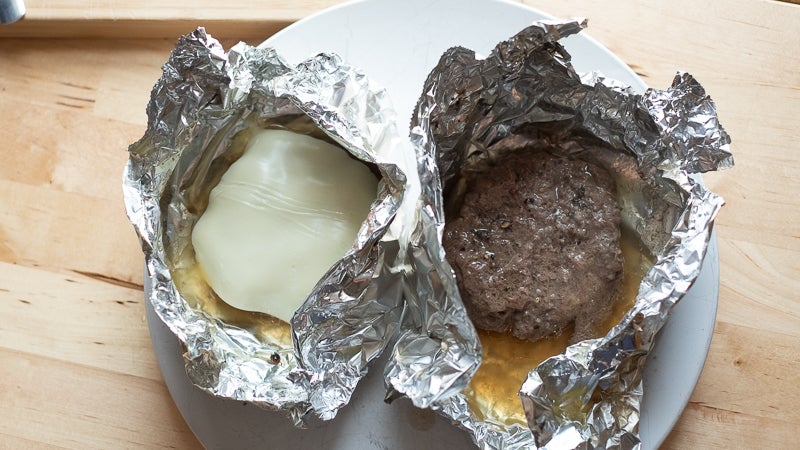 mac salad mood yesterday, which means that my lunch felt like the fourth of July all over again.