How ‘Karen’ Became The Name For Rude, Middle-Aged White Women

We’ve all met a Karen during our lifetime but we might not have known it. They’re asking for your manager, they’re telling you how much easier you have it than them and their presence on Facebook means sharing questionable posts. This is how Karen became the catch-all name for rude, middle-aged white women.

Karen is a mocking slang term for an entitled, obnoxious, middle-aged white woman. Especially as featured in memes, Karen is generally stereotyped as having a blonde bob haircut, asking to speak to retail and restaurant managers to voice complaints or make demands, and being a nagging, often divorced mother from Generation X.

But it all began, like most things on the internet, out of a meme.

According to Google Trends, the “can I speak to the manager” meme, featuring a Karen haircut, has been kicking around the depths of the internet since 2014 but only recently has the Karen been padded out with other personality quirks, most of them negative. 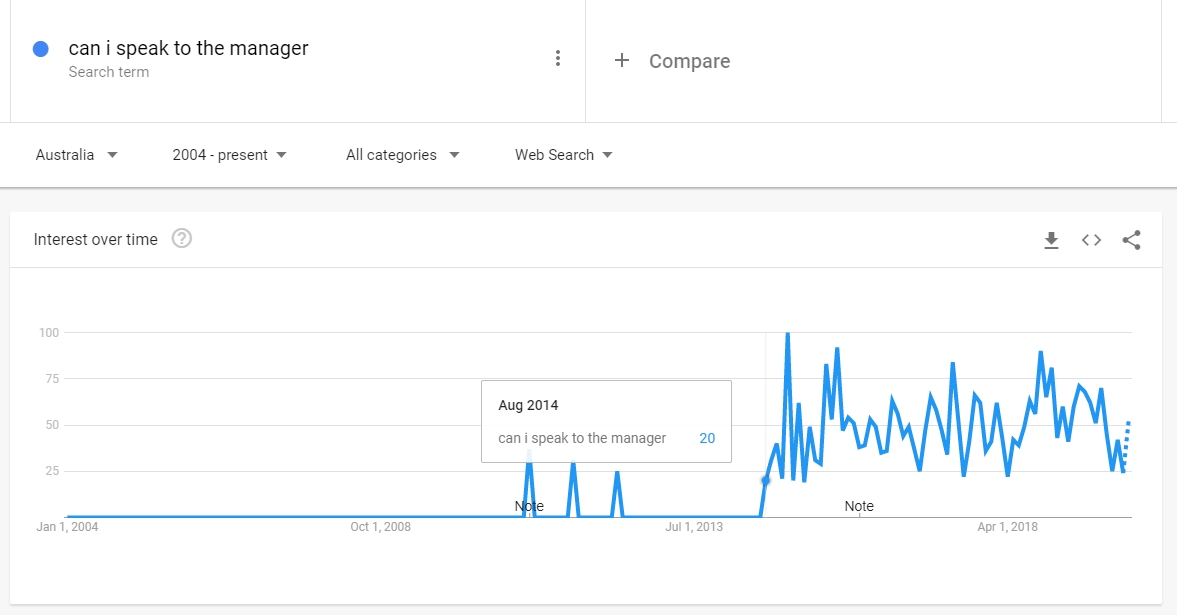 The most obvious — her entitlement and how she uses it to justify being a dick (or a Karen) to others.

It’s not exactly known why the name Karen was decided to represent the generation between the boomers and the millennials but Dictionary.com suggests it could have something to do with a Mean Girls or Goodfellas character. It could also be that Karen seems like a name only older Anglo women have, like Janet or Carol or Susan. A young Karen, in the imaginations of the internet, simply couldn’t exist.

But the name hardly matters, it’s what Karen does that defines her.

A big part of being a Karen is using authority against others less privileged than you. Asking for the manager because you’re not satisfied with the responses a 16-year-old retail worker gave you is considered a Karen move because a Karen is above mere children. A Karen would also donate to charities helping less-fortunate children overseas but she’d likely side against them if they tried to seek refuge in Australia by any means other than the legal way.

In Australia, a literal Karen went viral after she was filmed attempting to pull down a neighbour’s Aboriginal flag from his house, popularising the anti-racism hashtag #TooStrongForYouKaren.

WTF!!!! THIS HAPPENED TO MY PARENTS JUST LAST NIGHT pic.twitter.com/MqFfXgmV3z

In February 2020, Australian journalist Dr Julia Baird wrote a column deriding the term as being sexist and belittling a generation of women who fought hard for acceptance and equality. No one’s arguing women from Generation X didn’t but it’s the entitlement of some to pull up the ladder on the generations that proceed them. Life was tough for them so they’re not giving an inch to the ones that follow.

So if you’re being called a Karen for the way you’re behaving, don’t respond like one.

Where The Legend Of 'Scotty From Marketing' Began

Australian Prime Minister Scott Morrison has been called a lot of things during his time in office. From the arguably affectionate moniker ScoMo to more critical pseudonyms like SmoKo and Liar From The Shire. But there's one that's persisted over the past few months and he just can't shake it — Scotty from Marketing. We dug into where those three perfectly placed words originated from and why it's likely to stick.