According to user reports, the Google Play Store is haunted.

OK, not really. But it is pushing useless “ghost updates” for seemingly no reason. The majority of these updates are for first-party Google apps like G Board keyboard, YouTube and Gmail, but recent reports have included non-Google apps like Twitter.

These ghost updates show up in Google Play’s updates queue, but they don’t seem to be doing anything. They have the same version number as the apps already installed on your device and are entirely blank when you tap them to see more info—there are no patch notes or extra details about what the update includes. 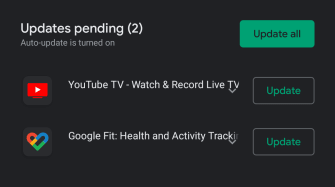 You can check to see if your device has been installing ghost updates by opening the Google Play Store app on your Android phone.

Open the side-bar menu and go to “My Apps & Games” > Updates. Here you’ll find a list of “pending” and “recently installed” apps/updates.

Usually, an update’s size will be listed under its name, but ghost updates don’t have a file size listed and the patch notes will be blank when you tap to view details. It’s strange, but the ghost updates seem to be harmless—aside from potentially cutting into your mobile data.

Even stranger, however, is that Google hasn’t said anything about the ghost update issue.

The bug has been actively reported by users for at least a couple months now, but Google has yet to offer an explanation or solution. Android Police reports that Google has even locked recent forum threads about the bug, so the company is clearly aware that something weird is happening. My guess is that fixing the ghost update problem is low on Google’s priority list since it appears to be benign at this point. Still, recognition of the bug would be worthwhile, given its widespread occurrence.

In the meantime, if you’re worried about ghost updates going all Slimer on your data cap, you can change your Google Play update settings so that apps only update at certain times.