How To Make A Mini Apple Pie Inside An Apple

Pies are really great, like, really great. Personally I am a huge fan of a dessert apple pie with custard and vanilla ice cream during the holidays, or anytime for that matter. With all this extra time many of us now have, why not learn how to make a great apple pie without too much effort.

Don’t worry – I won’t have you making dozens of crusts or go into the glass vs ceramic vs metal pie pan debate. We’re barely even going to use a dish at all to cook pies this week. 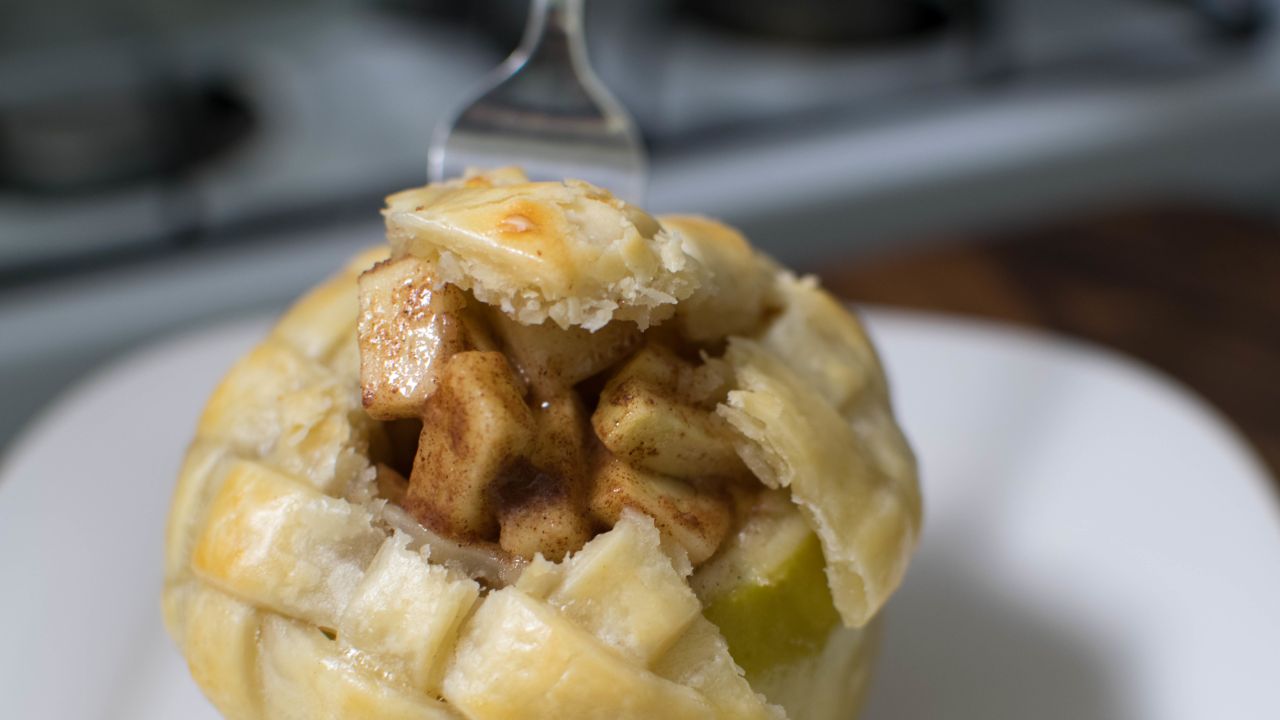 Not owning a pie plate isn’t a setback, though. With a little creativity, you can have that warm, gooey goodness in just over an hour’s time. And you probably have most of the ingredients on hand already.

Before we get started, some of you may be thinking, “Which apples should I use?” Just off the top of my head, I can think of six varieties at the supermarket that are common, and maybe another four that appear during the fall baking season.

You’re after baking apples: Not just the widely available Pink Lady and Granny Smith, but Jonagold, Honeycrisp, Golden Delicious, or Braeburns will all work well if you can get your hands on them. Baking apples are more firm than the eating varieties, which will lead to a more solid filling after cooking. I decided on a Golden delicious filling with a Granny Smith shell.

Start by preheating your oven to 190C, and filling an 8×8 baking dish with enough water to cover the bottom. Cut off the top of the apple you’ll be filling, and, using a melon baller, grapefruit spoon, or staring at it until it yields to the force of your will, scoop out the interior of the apple, leaving about a centimetre around the sides. You won’t be using the scooped out bits in this recipe, but they will make for great applesauce, apple butter or fritters. 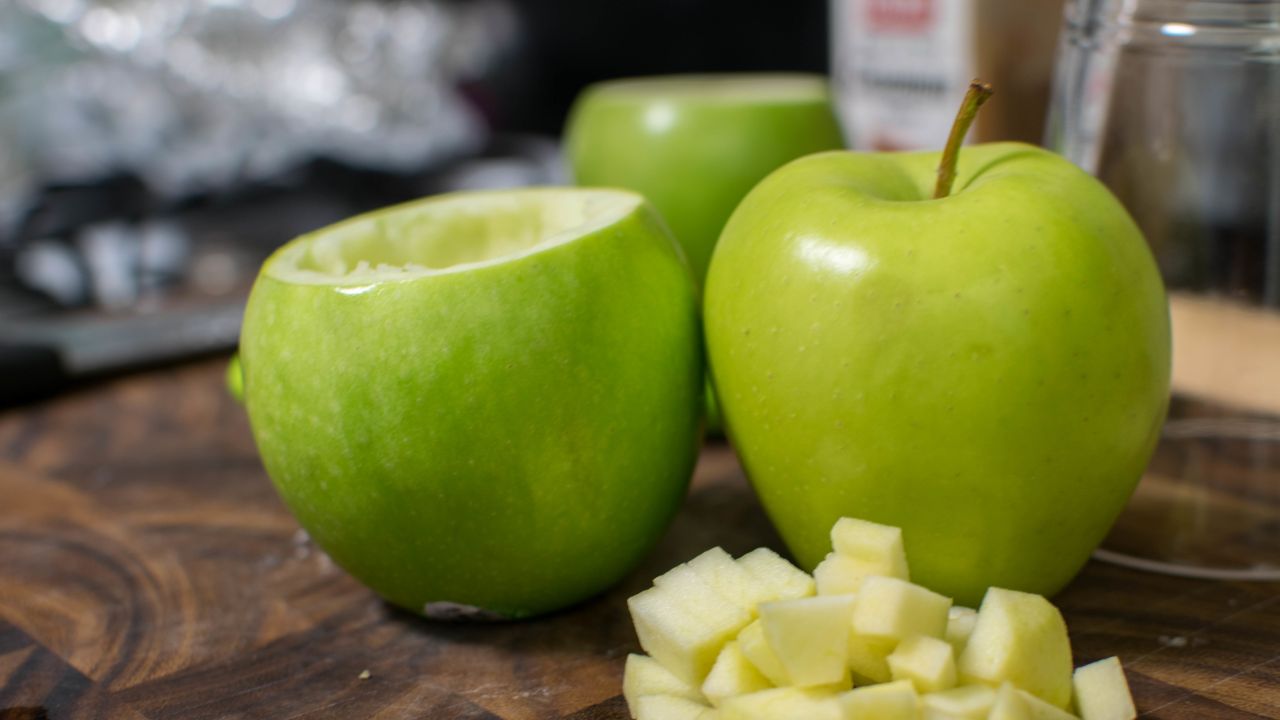 Oh, and a word to the wise: Don’t scoop too much out of your apple. I thought, “Gee I could probably scoop more out and have more room for filling!” WRONG. As I lay on the floor in a plank position, defeated by a late explosion of an over-softened apple, my girlfriend, saviour of many ideas, appeared.

“Is that the one you scooped more out of?”

“Did you learn nothing from the dwarves of Moria, who delved too greedily and too deep?“ 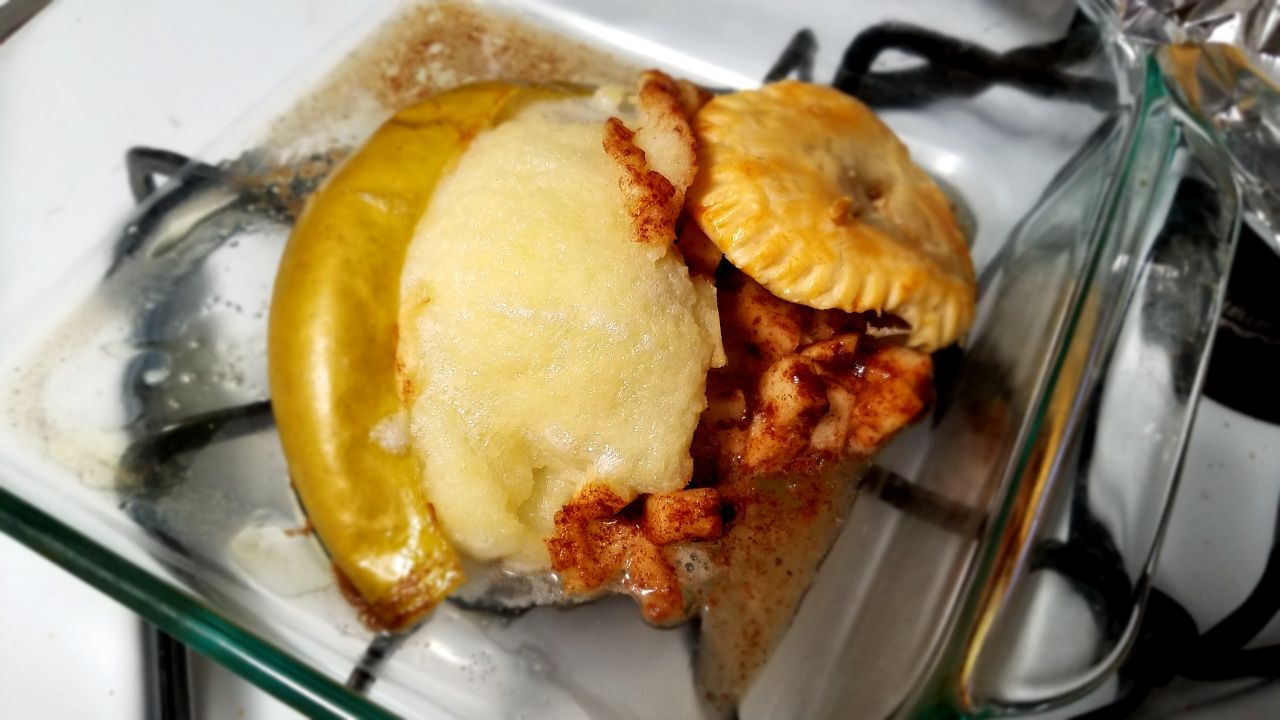 Learn from my mistakes. Don’t dig down more than Â¾ of the way at most. Not even the Arkenstone is worth ruining an apple for.

Back to the countertop. Peel and core your second apple, chopping it into a small dice. Toss the diced apple with the butter, brown sugar, cinnamon and flour, then stuff it into your emptied apple shell. Then it’s crust time. 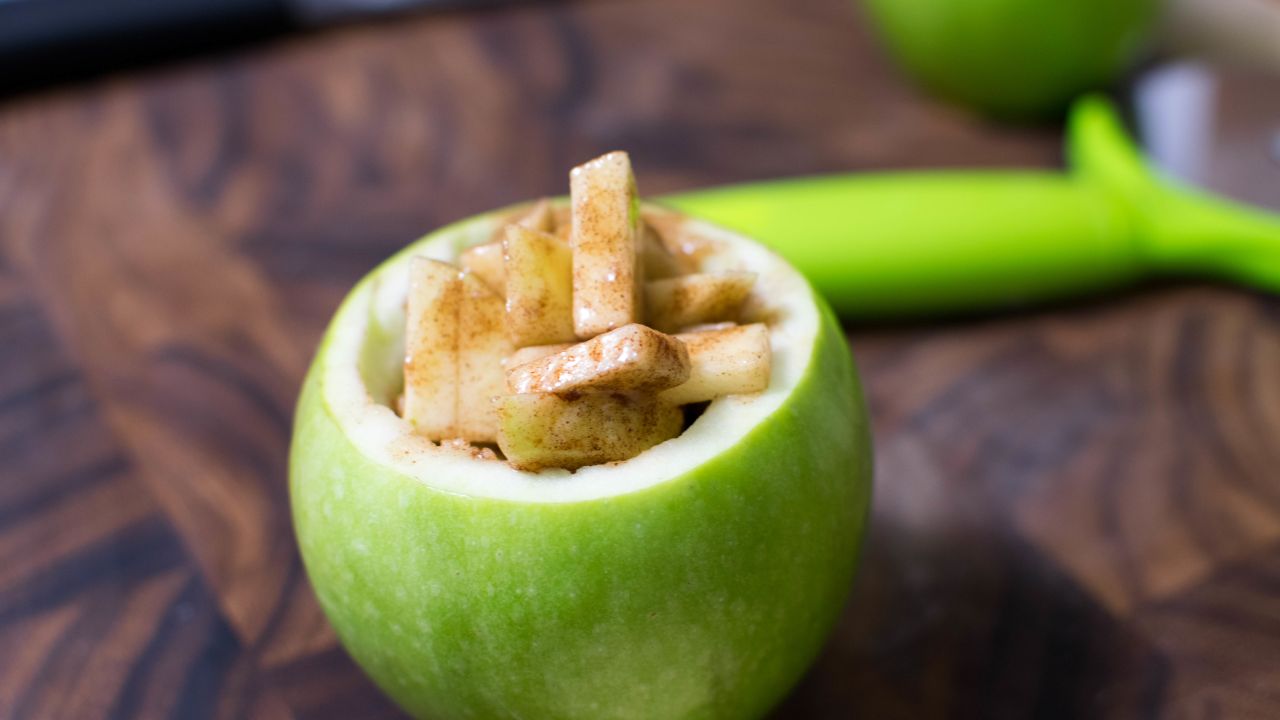 Roll your pie crust out to about a 6mm thickness. Now while you could use a glass or a cookie cutter to punch out a circle and drape it over your pie.. you’re better than that. Let’s fancy up a little lattice crust.

Using a pizza cutter, cut the dough into 1.3-centimetre strips. Take a few strips from one side, those are the ones we’ll be weaving in. 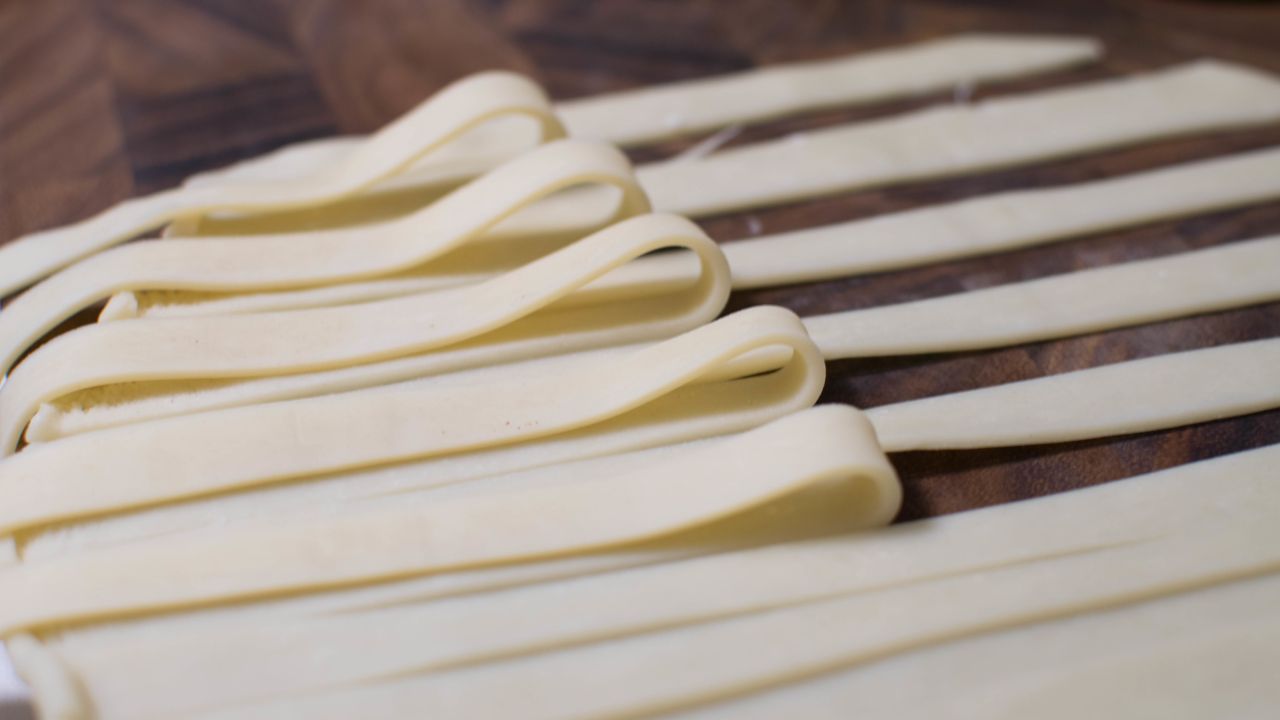 The best way to do this is think of the strips in terms of even and odd numbers. Fold down every even-numbered strip, and lay a weaving strip behind it. Fold those back up, and fold the odd-numbered strips down. 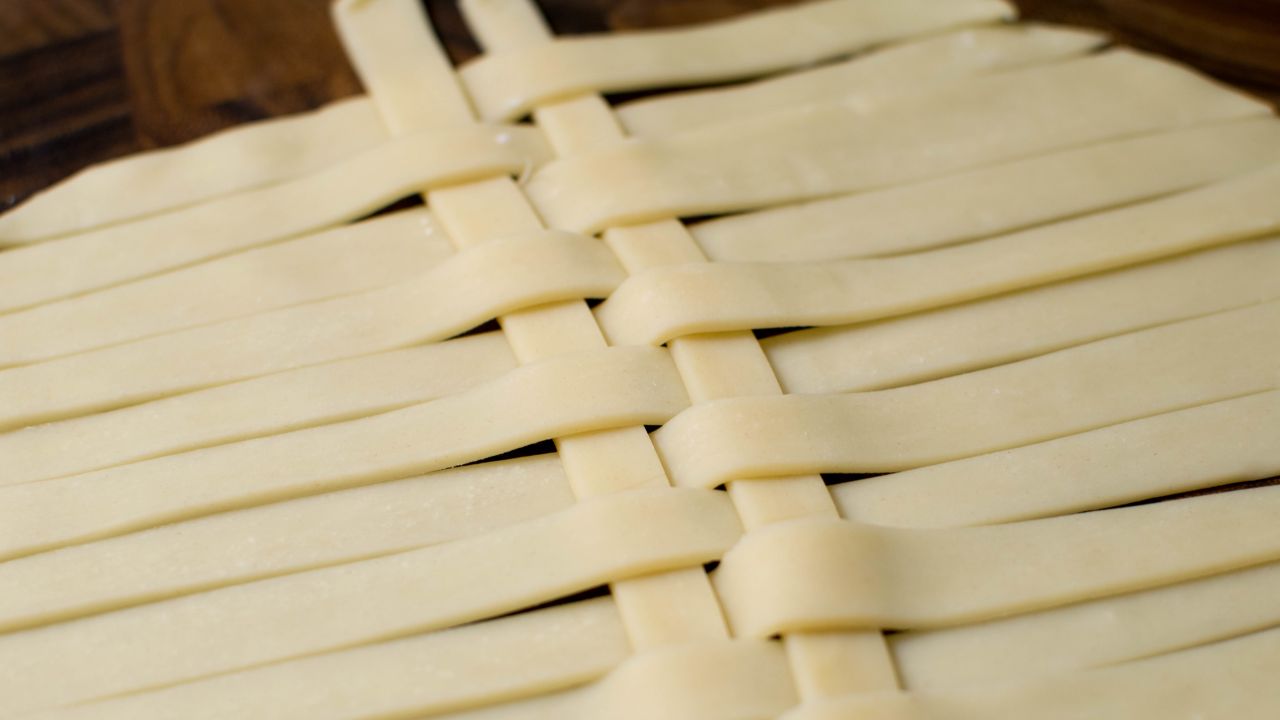 Find the center of your quick-little-lattice and, with a glass or cookie cutter, cut a circle that will fit over your apple. Pinch the crust to the sides of the apple, and place it in the baking dish. 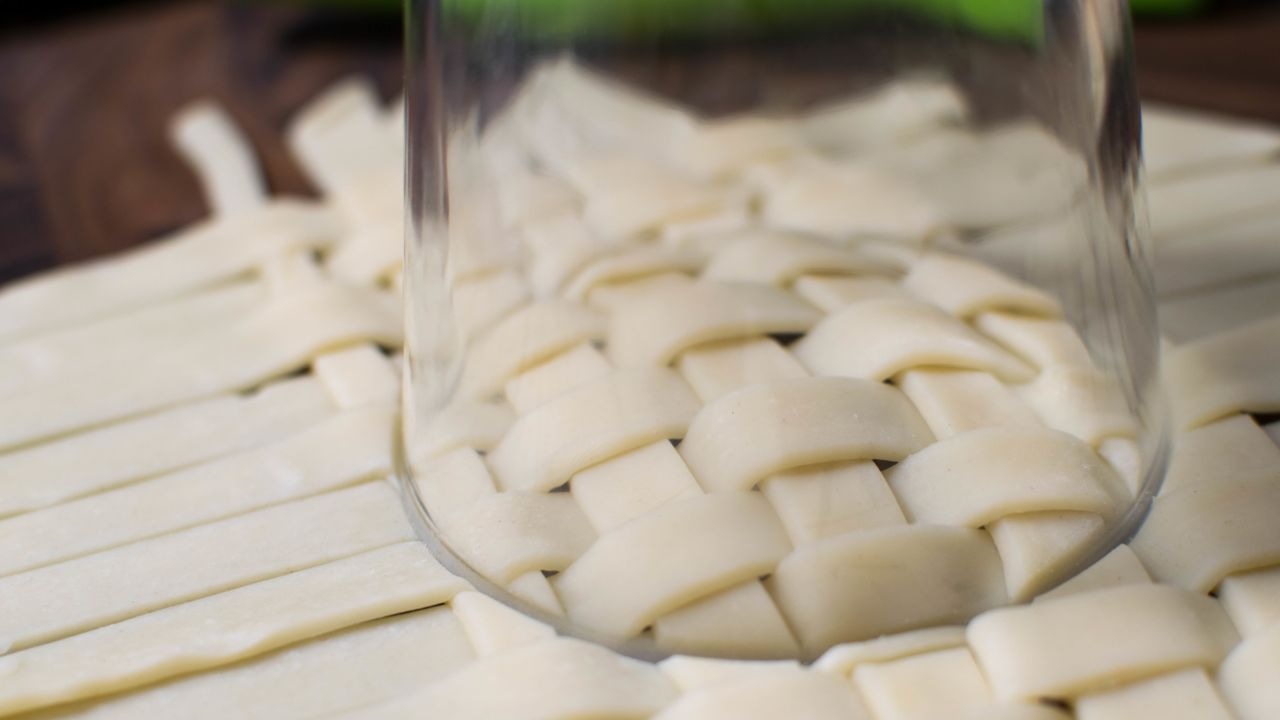 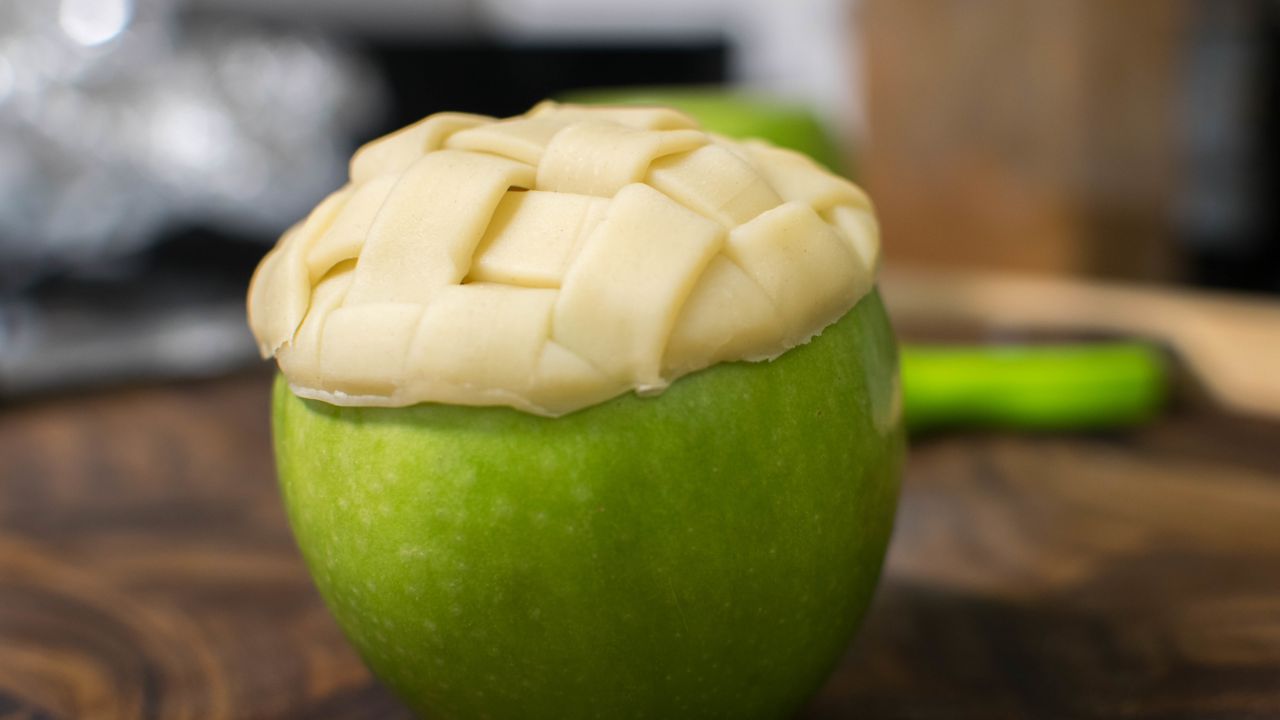 Whisk together the egg, yolk, and cream and lightly brush it on each apple. Cover the dish with foil and bake for 25 minutes, before removing the foil and baking for another 20 minutes. This will prevent the crust from over-browning, while the steam created from escaping moisture helps to cook the apple shell.

Let the apples cool for 5-10 minutes and dig in. As is my wont, I like a big hunk of cheddar alongside. The tenderness of the filling will vary depending on the apple you use – Golden Delicious and Braeburns are more toothsome than softer Cortlands and Honeycrisps. After all, there’s some good in the kitchen, dear reader. And it’s worth cooking.