Gaming is great and all—especially during a pandemic, and especially now that you can play a souped-up version of Minecraft with real-time ray tracing—but you can now use your Nvidia graphics card to create real-life magic. Just look at this noise-cancelling demonstration, all powered by your Nvidia GPU:

Nvidia's RTX Voice tech looks AMAZING. I can finally use a desk mic again with my mechanical keyboard! @Barnacules's test with the fan and hammer is so impressive https://t.co/ES7ELMiMQS pic.twitter.com/PCiA0DRcpW

Nvidia recently released a beta version of its new RTX Voice application, and it’s worth checking out if you have an Nvidia GeForce or Quadro graphics card—sorry, Mac users. First, it’s free; second, and more importantly, it does an incredible job of clearing out background noise while you’re trying to talk to other people.

The one caveat? Since the app is powered by your GPU, you might lose a few frames per second if you’re using the app to clean up your voice chat while you’re gaming. That shouldn’t be an issue for most people, but if you’re right on the cusp between “silky smooth gameplay” and “looks like butt,” know that enabling RTX Voice might not worth the trade-off.

If you don’t have an Nvidia RTX graphics card, fear not

As many have noticed, the installer craps out if you try to install this beta on a system that doesn’t have a newer RTX-branded Nvidia card. However, there’s a quick fix for that. Either use this workaround from David Lake, or use this separate third-party installer. So far, people seem to be having no problems using this on 10-series Nvidia cards (or newer), but 9-series cards might struggle.

Getting started with RTX Voice

If you’re ready to get started, grab the app and the latest GeForce drivers. Install the latter first, and then the former. The installation process for RTX Voice is simple, in that you don’t even have any options you have to pick. Agree to the licence, let the installer chug, and you’ll be done before a minute or so: 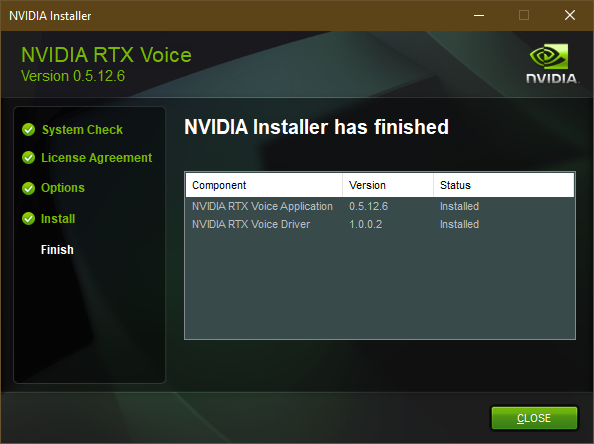 When you click Close, you’ll get a little message from Windows saying that your default speakers have changed. You’ll also see this pop-up from RTX Voice: 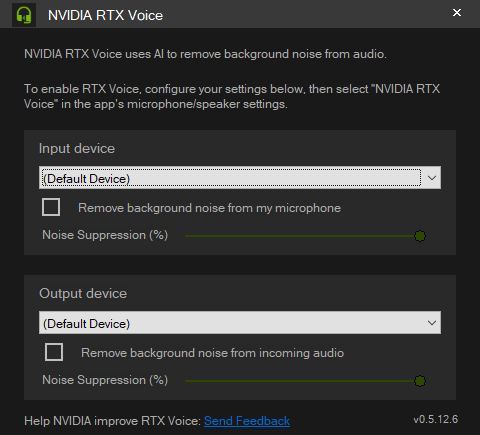 You can specify which input device you want to use, but I find it easiest to go with “default,” which uses whatever you’ve selected via the normal Windows interface. Also, Nvidia suggests only using noise suppression for your input device, as to not tax your graphics card too much:

“We recommend turning on RTX Voice for your microphone, and turn it on for your speakers only if needed. While quality remains almost the same, it is possible to see a small difference in some cases, and the solution takes system resources that you can avoid using if you don’t need it.”