How To Make Pesto From Kitchen Scraps

In terms of savoury no-cook sauces, it’s hard to beat pesto. You can spread it on bread, toss it with grilled vegetables, drizzle it on fish, or use it as a pasta sauce. Though it’s usually made with fresh basil, it can actually be made with almost any green thing, including kitchen scraps.

Heck, they don’t even have to be super leafy kitchen scraps. Tough, fibrous stalks; herb stems; and the tops of root vegetables all make excellent pesto. To see if there was a scrap that couldn’t be pesto-fied, I grabbed a variety of greenish plant parts that might otherwise be destined for the compost pile. 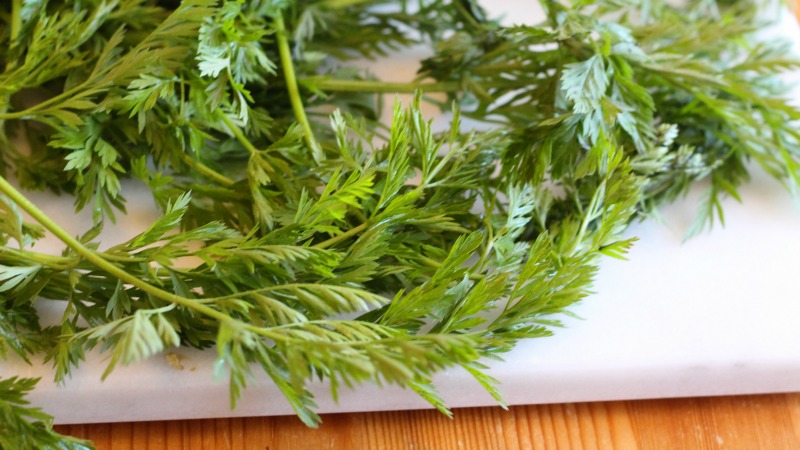 Starting with carrot tops, I prepared the verdant sauce as this article instructs, using the following proportions: 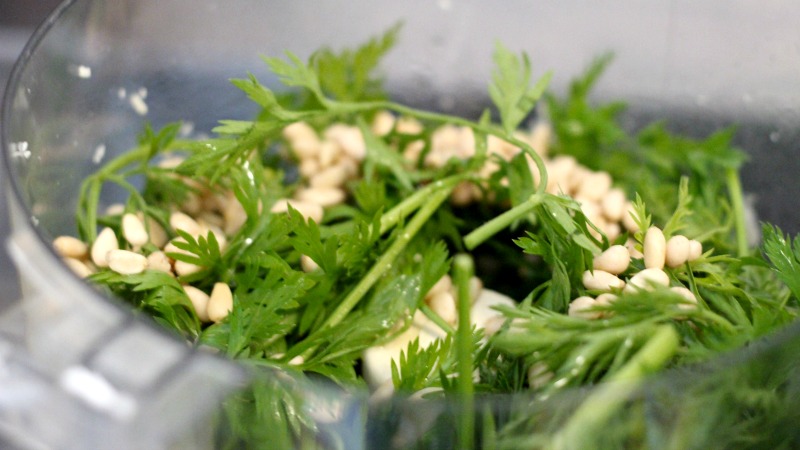 First, I peeled a couple of cloves of garlic and threw them in the bowl of my food processor, chopping them with the “pulse” function until they were minced. I then added the feathery carrot tops (long stems included), oil and pine nuts and blended until smooth. Next came the cheese, which I pulsed in until it was just combined. I then added the lemon juice, salt and pepper, and blended once more. 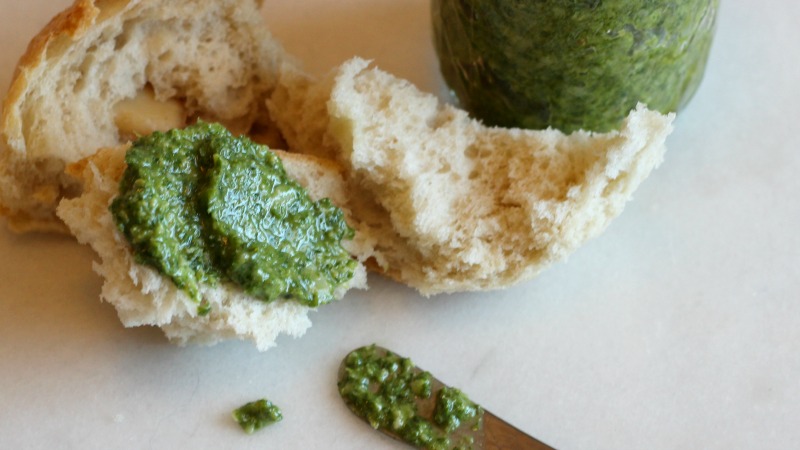 The resulting sauce was grassy, green and fresh, with all of the garlicky, salty goodness you would expect from pesto. It was more vegetal than traditional basil pesto, which made it feel decidedly summery, in my opinion. I found it so enjoyable, in fact, that I plan to never let the store clerk remove the tops from my carrots ever again. 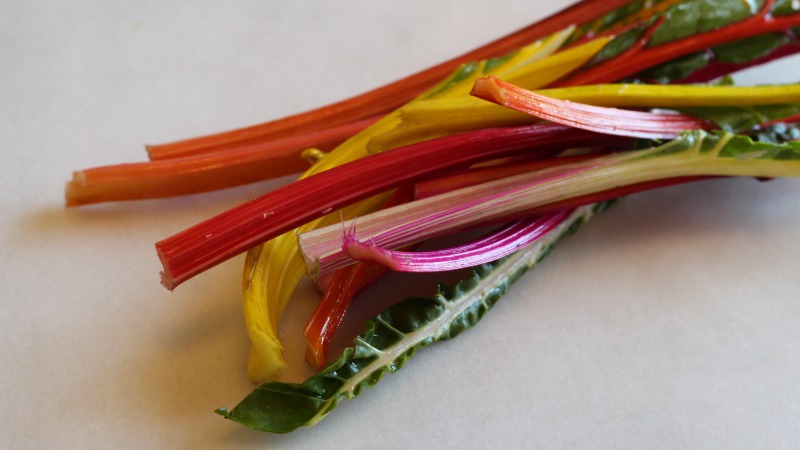 I don’t usually have a hard time eating chard stems – I just eat them with the rest of the leaf – but some people like to remove them before cooking the more tender part of the green. I made this pesto exactly the same as the one above and, though it was quite ugly, was pretty pleased with the outcome. You can use it exactly as you would any other pesto, but I think it would be particularly wonderful as the sauce in a vegetable pasta. This pesto had a nice crunch and a fresh and bright, though slightly bitter, flavour. Given its crisp nature, I think it would be a fantastic sandwich spread, particularly when paired with rich, creamy cheeses and fatty, salty meats. 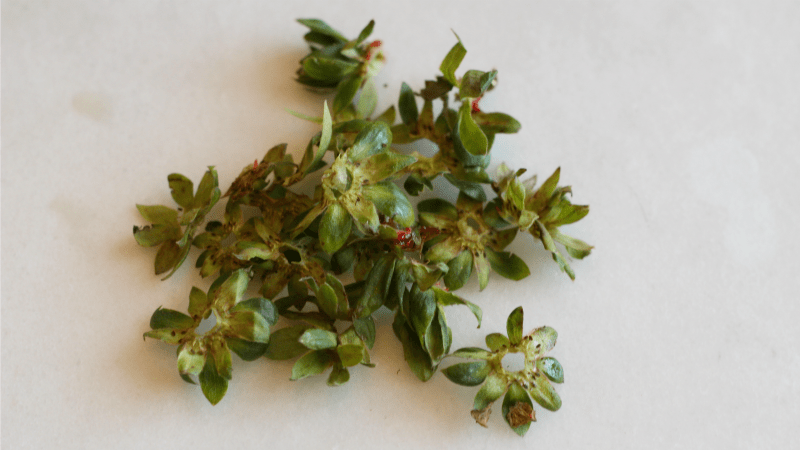 As you can see, two punnets of strawberries doesn’t get you that many tops, so I had to scale the recipe down a good bit. After dividing everything by eight to accommodate my 1/4 cup of tops, and then blending it all together, I was left with a very small sauce cup of pesto. 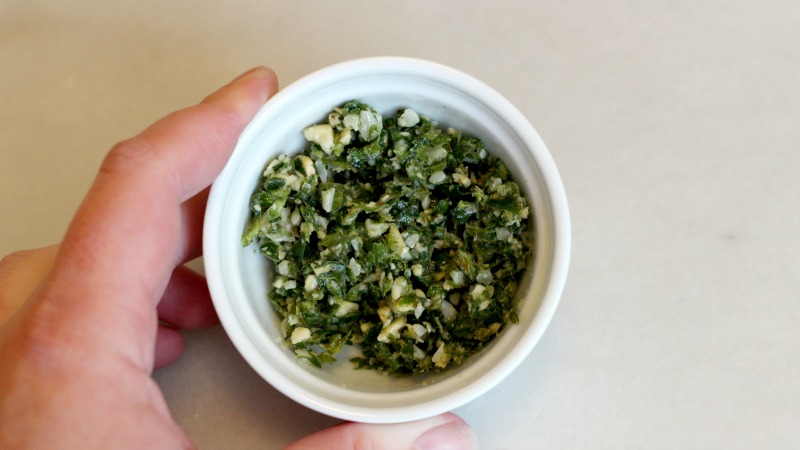 It was by far the most bitter pesto I tasted, but I like bitter things, and ate it up on a piece of crusty bread. If you really want to try this fruit stem pesto I recommend saving your strawberry stems throughout the season, rather than trying to make minuscule batches like the above. 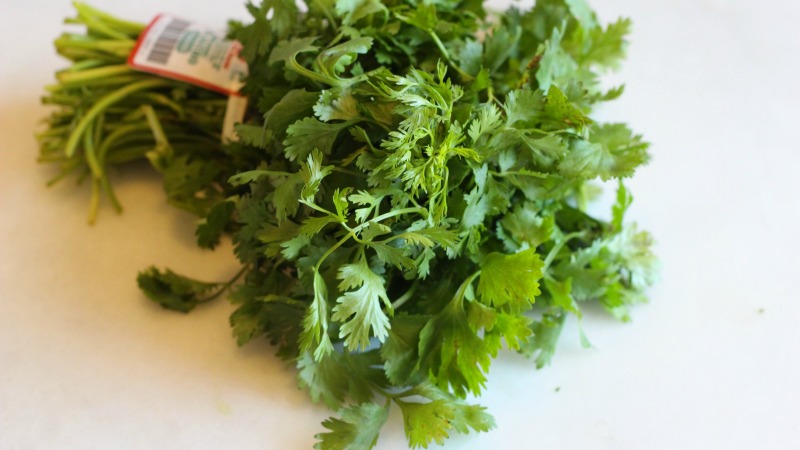 OK, so obviously coriander isn’t a “scrap” in the traditional sense, but if there is one thing I’m terrible at using up before it goes bad, it’s fresh herbs. (I know you can makeÂ herb ice cubes, but I just don’t have the room in my freezer.) I just happened to have a bunch of coriander that was starting to look a little sketch, so including it in this roundup was a pretty obvious choice.

The only slight change I made to this pesto was swapping out lemon juice for lime, and the result was delicious. Blending coriander with oil and a bit of cheese mellowed it out bit without obscuring the flavour of the herb. It tasted like coriander to be sure, but it was much less aggressive than the straight-up fresh stuff. Improve your life by making this and putting it on tacos.

I could go on pesto-fying scraps, stems and excess herbs all day, and can’t wait to get my hands on some turnip tops, kale ribs and Italian parsley. Heck, I may even pesto that wilty bit of baby kale that’s hanging out in my produce drawer. I was going to make a salad, but that all seems so boring now.