How To Get Started Welding For Dirt Cheap

Welding is a human superpower, there’s no question about it. It takes traditional ratchet-turning to an entirely new level, allowing you to fuse metal together to rebuild rotted frames, build special tools to extract seized bearing races, remove broken bolts—the possibilities are endless. And while welding is hard, it’s not something you should be scared of. Just watch me, an amateur, show former Jalopnik writer Kristen Lee the ropes on a $150 welder.

Just a few years ago, welding intimidated me a bit. I’d tried it back in college, and just remember being unable to see anything, and struggling to make something that even resembled a serviceable weld. Then in 2018, I bought my $US500 ($770) Postal Jeep, realised it had a two-foot hole in its frame, and had no choice but to overcome my hesitance. What I learned after talking with experts and successfully stitching up my Jeep’s frame was that welding should be respected, but not feared.

I’m still not a great welder, but that doesn’t mean I can’t show the basics to Jalopnik Hall-Of-Famer Kristen Lee (who now writes at Business Insider), who had never welded before. The takeaway from the video above should be that, not only is welding accessible to the masses since you can snag a machine for only $150, but it’s also a lot of fun. Also, it takes a lot of practice to get good.

Just be sure to take the necessary safety precautions—always wear a good welding helmet, throw on some leather gloves and a leather apron, be sure to wear a non-flammable long sleeve shirt and leather shoes—and do a bit of research to get yourself comfortable.

In my case, I talked to friends, who have spent years wielding a welding gun. And I bought my gear from my favourite purveyor of ridiculously cheap tools, US tool store Harbour Freight. The welder cost me under $200. You can get a stick welder in Australia for $120 but there are a number of options to choose from if your budget is a little higher. The auto-darkening helmet—show directly above, and whose job it is to protect my eyes from the bright welding arc—is available for $49 with welding gloves. It’s much better than the face mask that comes with the cheap welder.

Finally, the leather apron will set you back around $30.

Stores often have deals on this stuff; in total, it’s possible to spend around $200 on everything you need to get started welding. 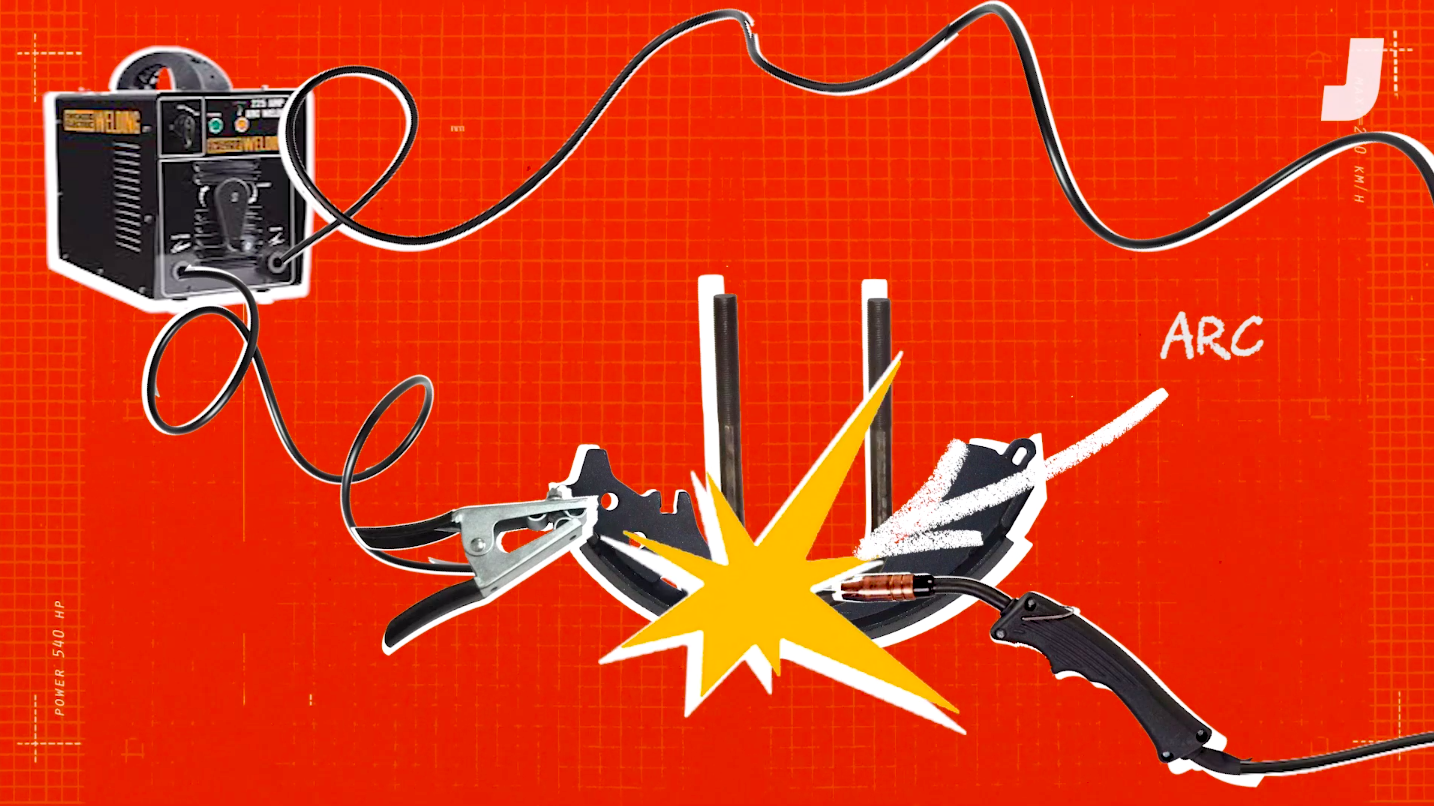 The principle behind metal inert gas welding, or MIG Welding, is fairly simple. A metal filler rod is shot through a welding gun when the operator presses a trigger. That rod, which is energised, acts as an electrode, and when it comes near a grounded part, it creates an arc, yielding intense heat the melts the filler and both metal parts at the junction.

You may notice that many welders include a large bottle of shielding gas made up of CO2 and argon. This gas is there to surround the pool of molten metal, preventing various elements found in the atmosphere from contaminating the weld and affecting its fusing and aesthetic properties.

My Harbour Freight welder is a “flux core” device, meaning the metal rod itself will, upon melting, emit a shielding gas. This means I don’t need a bottle, but it also means my welds aren’t likely to be as pretty as those from a MIG that relies on a separate shielding gas bottle. 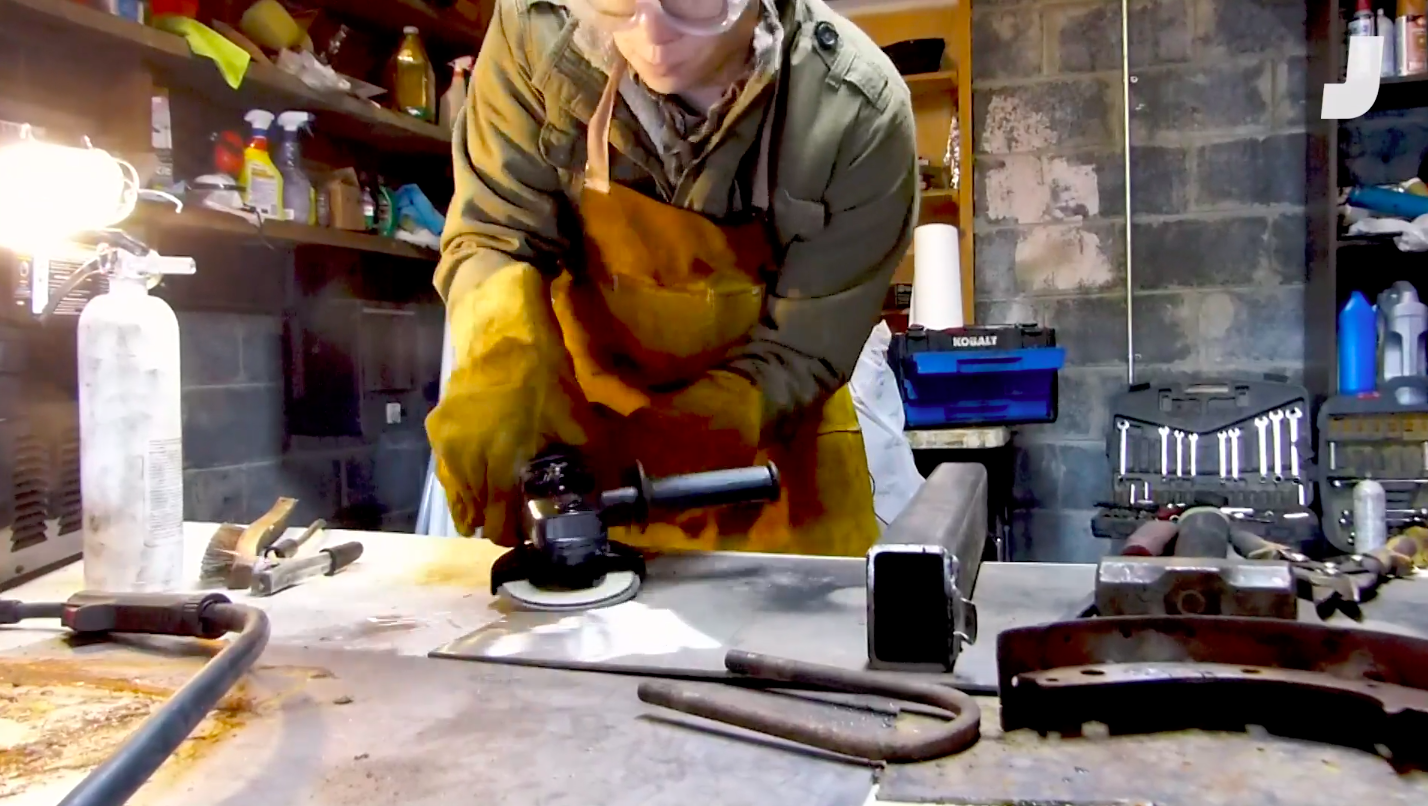 One tool you’ll want to own in addition to the ones I showed above is a metal brush and an angle grinder. It’s absolutely critical that the parts being welded are clean (be careful not to use certain brake cleaners on parts you’ll weld; this is very dangerous) and devoid of any surface rust. The best way to ensure this is to knock the top layer of junk from the two parts with an angle grinder, as I’m doing in the screenshot above. You can grab a Bosch angle grinder for around $50 and slap on a flap disc, which you can buy in packets.

The two key areas that need to be cleaned are the interface that is to be welded and the section of the part that will be grounded via the welder’s ground clamp. 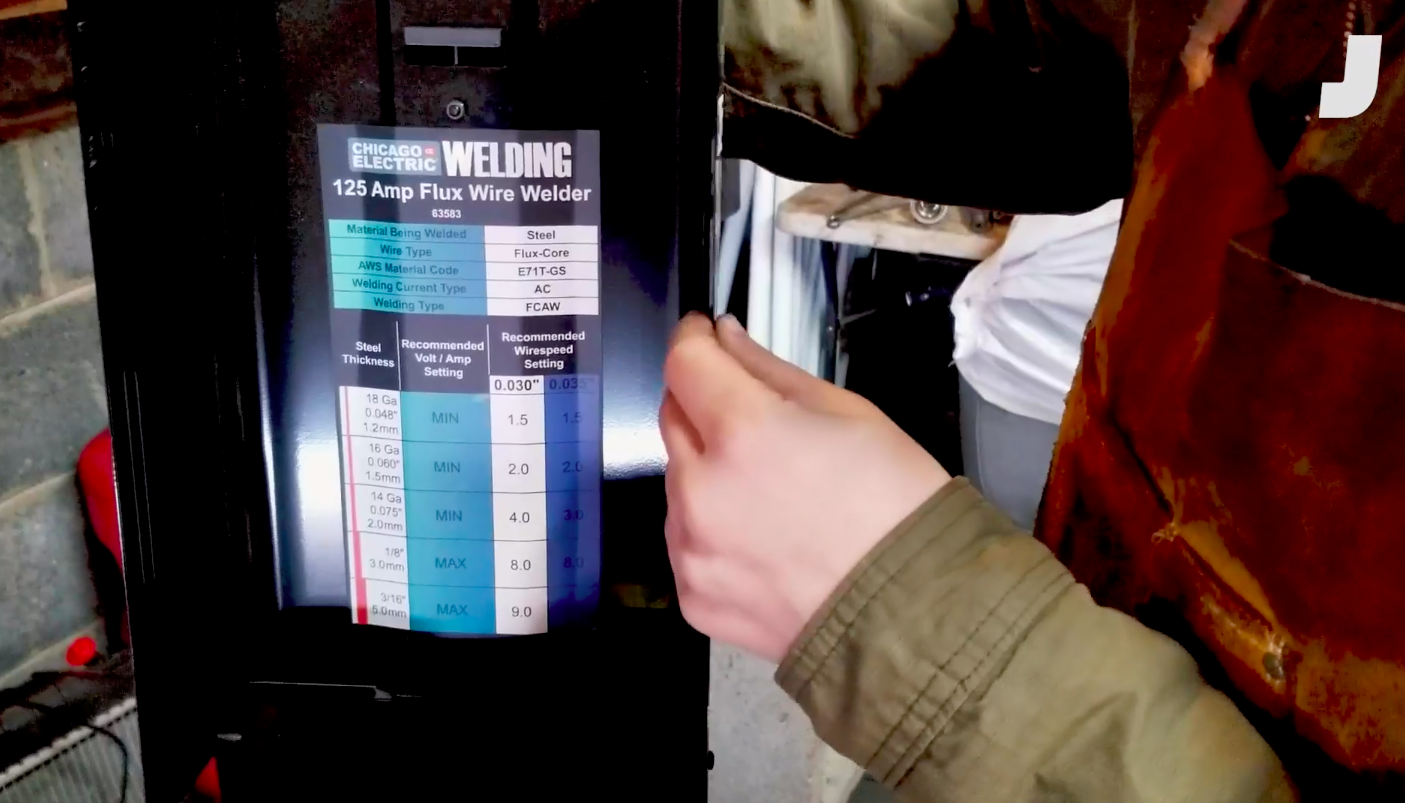 As for how to set up the machine, that’s something you’re just going to have to play around with. The cheap Harbour Freight welder only has two “levers” to pull, the power setting and the wire speed. Power offers just “min” and “max,” while wire speed is adjustable from zero to 10. There is a guide in the welder’s lid to help you guess how to set up the machine based on the metal’s thickness and the flux core wire diameter. 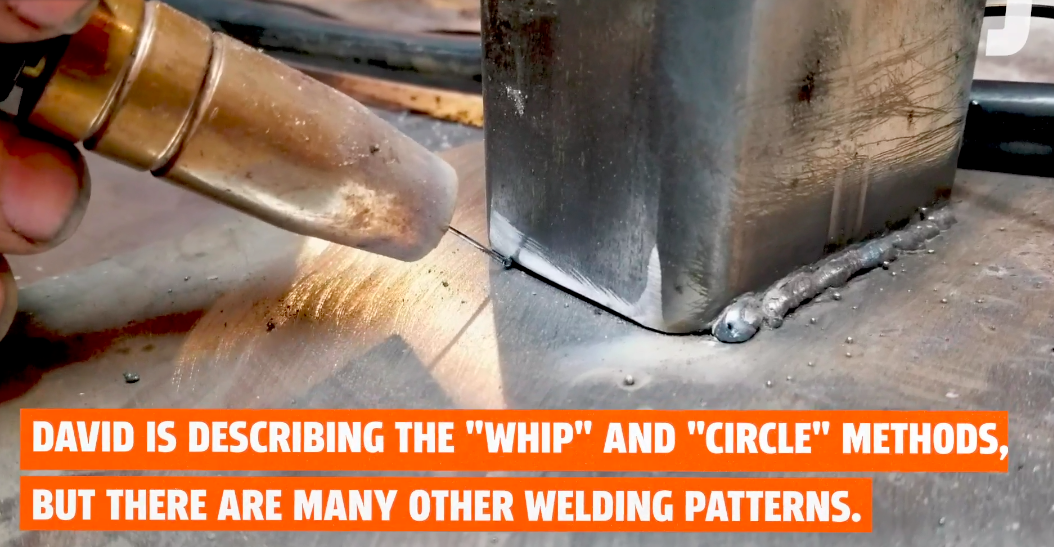 Another thing I touch on, albeit briefly, in the video is technique. I’m so far from an expert welder that I won’t pretend to be well-versed in this. But the main struggle that many first-time welders have is dragging that pool of molten metal along the welding joint in a controlled manner, so it’s worth mentioning the whip and circle methods. Trade publication The Welder magazine describes them, writing:

And this is where technique comes in—we have to use a good technique to make sure the bead is continuous and uniform. Running a flat bead on plate can be done using several different techniques including whip, circle, figure eight, crescent, j, and z. All I’ve ever seen or used in the field are circles and the whip.

I first learned circles, then later the whip. Some instructors will tell you the whip is the onlyway, while others advocate circles or both. There are many different techniques in welding applications, and as I’ve said before, I don’t care if you weld standing on your head or gargling purple peanut butter, as long as you produce a sound weld.

In the whip, the rod is whipped (brought out in a quick motion) out and away from the puddle anywhere from “ to 1″. (The distance is subjective. It could be more or less.) The rod then is whipped back into the puddle immediately.

There’s a lot more to welding technique than the circle and whip methods; there’s also the push or pull technique, different machine settings, different ways to prep the parts, and the list goes on.

It’s not easy, and people who do this for a living deserve tremendous respect. But that doesn’t mean you shouldn’t go out there, buy a cheap welder and safety equipment, do some research online to get yourself comfortable, and just start welding leaf spring U-bolts to brake shoes.

And don’t worry if you’re awful at first. Just look at Kristen Lee and me. If we can slowly but surely teach ourselves to weld, so can you. Kristen got markedly better between her first and second weld attempts, and I have no doubt that if we’d spent more time with it, she’d have caught up to me in no time.