Everything Coming To Netflix This Easter Weekend

Most of Australia will be stuck indoors for four days this Easter. While we can occupy ourselves with cleaning, cooking and gardening, streaming is most likely how we’ll end up spending it. To enable you, here’s everything coming to Netflix Australia over the long weekend.

In terms of original Netflix content, the list is a bit light but it makes up for it in classic action movies and comedies. Some movies from The Mummy franchise (including the Tom Cruise reboot, regrettably) will be available while the American Pie series and Jaws 2 and Jaws 3 have been added for a weekend of nostalgia.

Note: All program descriptions and synopses were provided by Netflix. 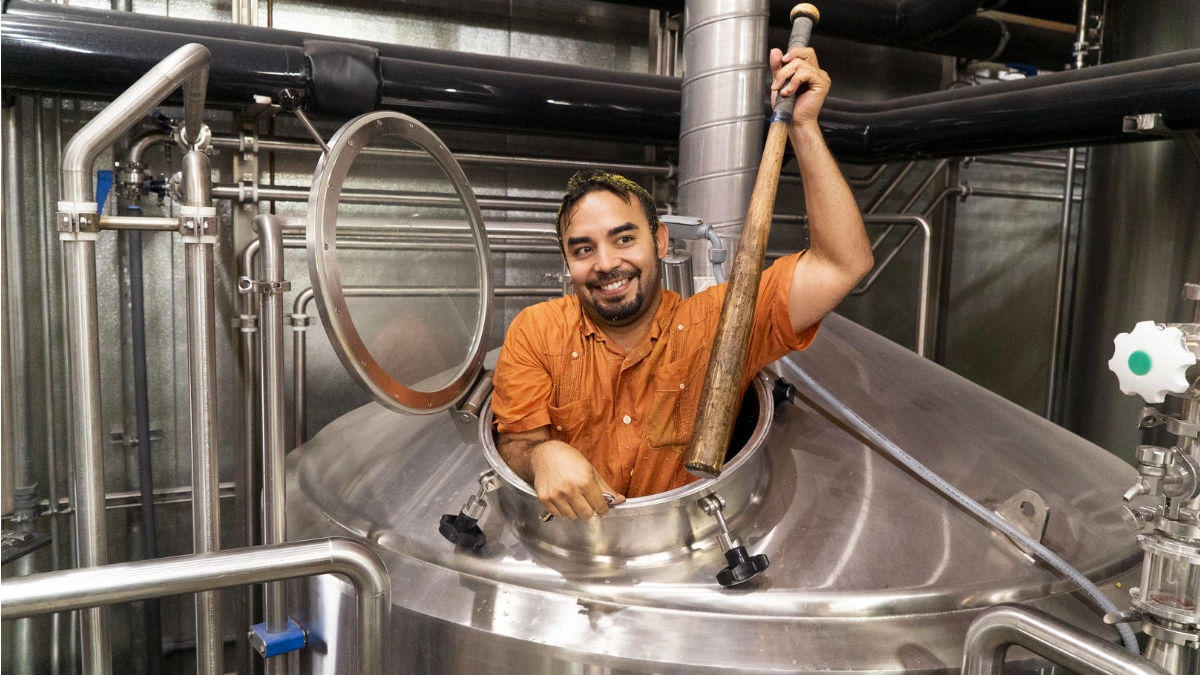 These two estranged brothers know everything there is to know about brewing beer. If only they knew something about being a family. 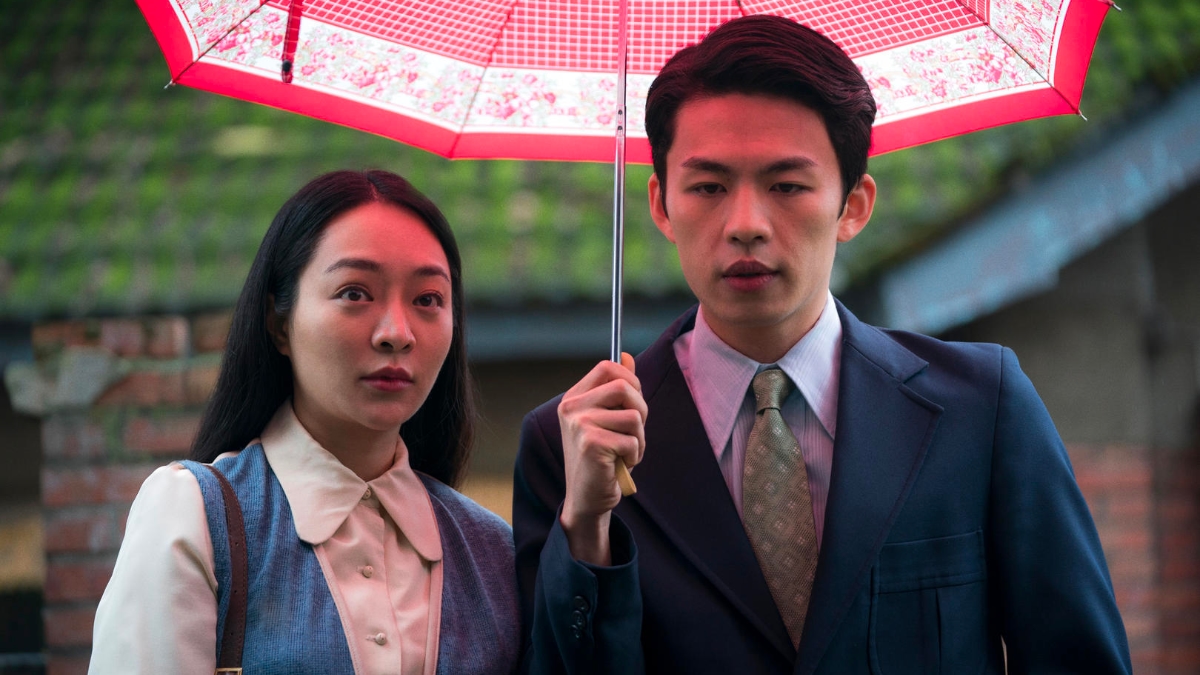 In New York, Pin-Jui (Tzi Ma) reflects on the love of his past and his departure from Taiwan, which he revisits years later with his daughter Angela.

In this innovative romantic comedy about the power of chance, alternate versions of the same wedding unfold as Jack (Sam Claflin) tries to make sure his little sister has the perfect wedding day. But he’ll have to juggle an angry ex-girlfriend, an uninvited guest with a secret, a misplaced sleep sedative, and unexpectedly reuniting with the girl of his dreams who got away, Dina (Olivia Munn). If he succeeds, Jack might find a happy ending of his own. 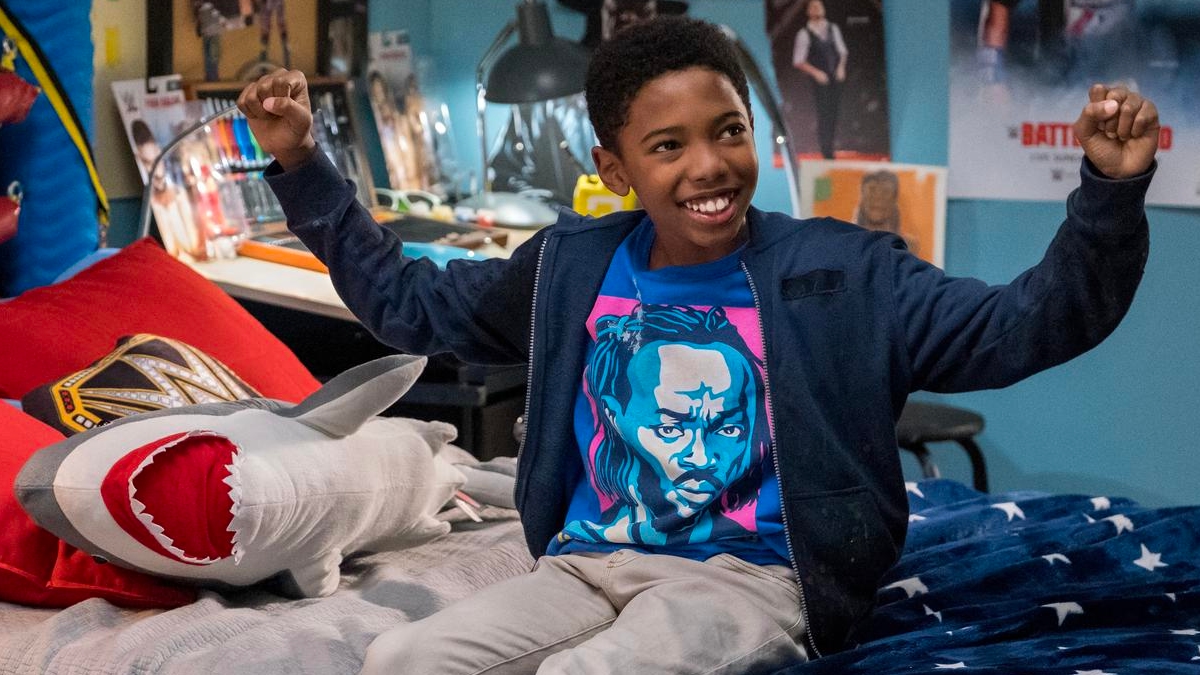 Using special powers from a magical mask, a young WWE fan causes chaos when he enters a wrestling competition and fights an intimidating rival. 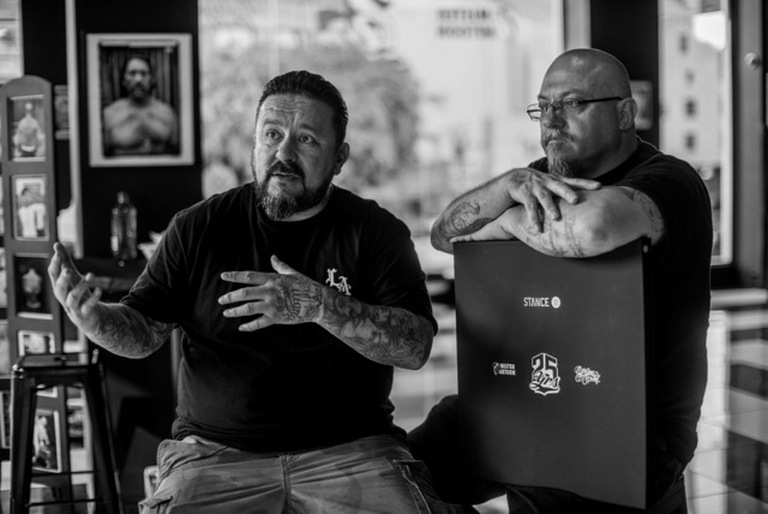 Known for their ties to Chicano street life and hip hop, Estevan Oriol and Mister Cartoon trace their journey from gifted artists to cultural pioneers.

They’ve leveled up to high school, training at arcade fighting games along the way. Now Haruo, Akira and their friends face their final level.

Five high school students from different walks of life endure a Saturday detention under a power-hungry principal (Paul Gleason). The disparate group includes rebel John (Judd Nelson), princess Claire (Molly Ringwald), outcast Allison (Ally Sheedy), brainy Brian (Anthony Michael Hall) and Andrew (Emilio Estevez), the jock. Each has a chance to tell his or her story, making the others see them a little differently — and when the day ends, they question whether school will ever be the same. 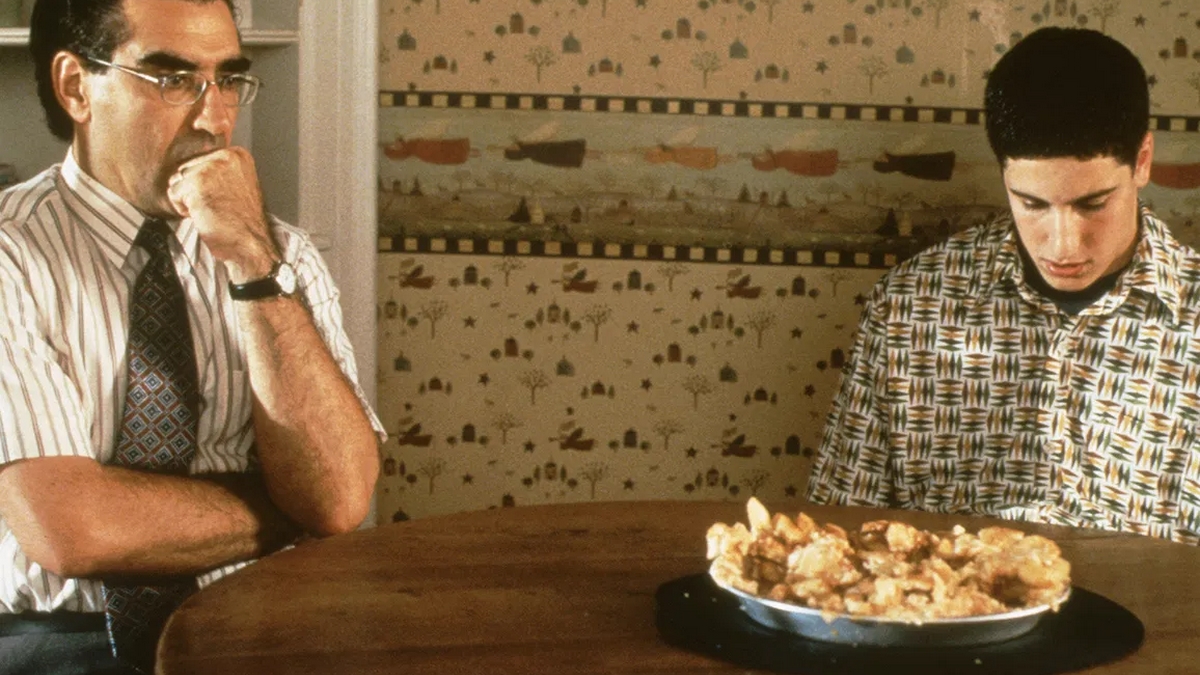 A riotous and raunchy exploration of the most eagerly anticipated — and most humiliating — rite of adulthood, known as losing one’s virginity. In this hilarious lesson in life, love and libido, a group of friends, fed up with their well-deserved reputations as sexual no-hitters, decide to take action.

After a year apart – attending different schools, meeting different people – the guys rent a beach house and vow to make this the best summer ever. As it turns out, whether that will happen or not has a lot to do with the girls. Between the wild parties, outrageous revelations and yes, a trip to band camp, they discover that times change and people change, but in the end, it’s all about sticking together.

In the summer of 1999, four small-town Michigan boys began a quest to lose their virginity. In the ensuing years, Jim (Jason Biggs) has married Michelle (Alyson Hannigan), though Kevin (Thomas Ian Nicholas) has left Vicky (Tara Reid). Oz (Chris Klein) has grown apart from Heather (Mena Suvari), but Finch still has the hots for Stiffler’s (Seann William Scott) mom (Jennifer Coolidge). These lifelong friends have come home to reminisce about — and become inspired by — their former teen selves.

Even though Jim (Jason Biggs) and Michelle (Alyson Hannigan) have been dating for several years, she’s still surprised when he proposes to her in their favourite restaurant. After she happily agrees, Jim asks his best friends, Kevin (Thomas Ian Nicholas) and Paul (Eddie Kaye Thomas), to help him make sure the wedding goes as smoothly as possible. As the big day approaches, trouble arises when the trio learns their hard-partying friend, Stifler (Seann William Scott), is in town.

Shaun (Simon Pegg) is a 30-something loser with a dull, easy existence. When he’s not working at the electronics store, he lives with his slovenly best friend, Ed (Nick Frost), in a small flat on the outskirts of London. The only unpredictable element in his life is his girlfriend, Liz (Kate Ashfield), who wishes desperately for Shaun to grow up and be a man. When the town is inexplicably overrun with zombies, Shaun must rise to the occasion and protect both Liz and his mother (Penelope Wilton).

Years after the shark attacks that left Amity Island reeling, Sheriff Martin Brody (Roy Scheider) finds new trouble lurking in the waters. Mayor Vaughn (Murray Hamilton) wants to rid the beach town of the stain on its reputation. But the disappearance of a pair of divers suggests that all is not right. When Sheriff Brody voices his warnings about holding a sailing competition, everyone thinks it’s post-traumatic stress. That is, until a shark fin cuts through the water.

After a young great white shark finds its way into a sea-themed park managed by Calvin Bouchard (Louis Gossett Jr.), workers try to capture it. But the facility’s attempt to keep the shark in captivity has dire consequences: A much larger mother shark appears in search of its offspring. Among those who must battle the angry aquatic killing machine are marine biologist Kathryn Morgan (Bess Armstrong), her co-worker Mike Brody (Dennis Quaid) and a pair of friendly dolphins.

Seven years have passed since Dr. Hannibal Lecter (Anthony Hopkins) escaped from custody. The doctor is now at large in Europe. Mason Verger (Gary Oldman) remembers Lecter too, and is obsessed with revenge. Verger was Dr. Lecter’s sixth victim, and though horribly disfigured, has survived. Verger realizes that to draw the doctor into the open, he must use someone as bait: Clarice Starling (Julianne Moore).

In this animated adventure, chipmunk Alvin (Ross Bagdasarian Jr.) has werewolves on his mind. After being haunted by a creepy nightmare, he is convinced that his eerie next-door neighbour, Mr. Talbot (Maurice LaMarche), has a monstrous secret. As he and his brother Simon (also Bagdasarian) investigate, shy sibling Theodore (Janice Karman), who has been reluctantly cast in the school’s production of “Dr. Jekyll and Mr. Hyde,” finds his inner monster after being attacked by a strange dog.

An ambitious executive at a record company, Aaron Green (Jonah Hill) gets what looks like an easy assignment: He must escort British rock legend Aldous Snow (Russell Brand) to L.A.’s Greek Theatre for the first stop on a lucrative comeback-concert tour. Snow, however, has different plans. Learning his true love is in California, the rocker vows to win her back before starting the tour, forcing Aaron to pull out all the stops to get Snow on stage in time.

Littlefoot (Gabriel Damon), a young plant-eating dinosaur, is orphaned after his mother (Helen Shaver) perishes while protecting him from a vicious carnivore. With her last breath, she tells him how to get to the legendary Great Valley, where he will be reunited with others of his kind. With his friend Cera (Candace Hutson), Littlefoot sets out for the fabled land, meeting a variety of new friends along the way — while also being tracked by the killer dinosaur that mortally wounded his mother.

Bill Parrish (Anthony Hopkins), businessman and devoted family man, is about to celebrate his 65th birthday. However, before he reaches that landmark, he is visited by Death (Brad Pitt), who has taken human form as Joe Black, a young man who recently died. Joe and Bill make a deal: Bill will be given a few extra days of his life, and Joe will spend the same time getting to know what it’s like to be human. It seems like a perfect arrangement, until Joe falls in love — with Bill’s daughter.

Nick Morton is a soldier of fortune who plunders ancient sites for timeless artifacts and sells them to the highest bidder. When Nick and his partner come under attack in the Middle East, the ensuing battle accidentally unearths Ahmanet, a betrayed Egyptian princess who was entombed under the desert for thousands of years. With her powers constantly evolving, Morton must now stop the resurrected monster as she embarks on a furious rampage through the streets of London. 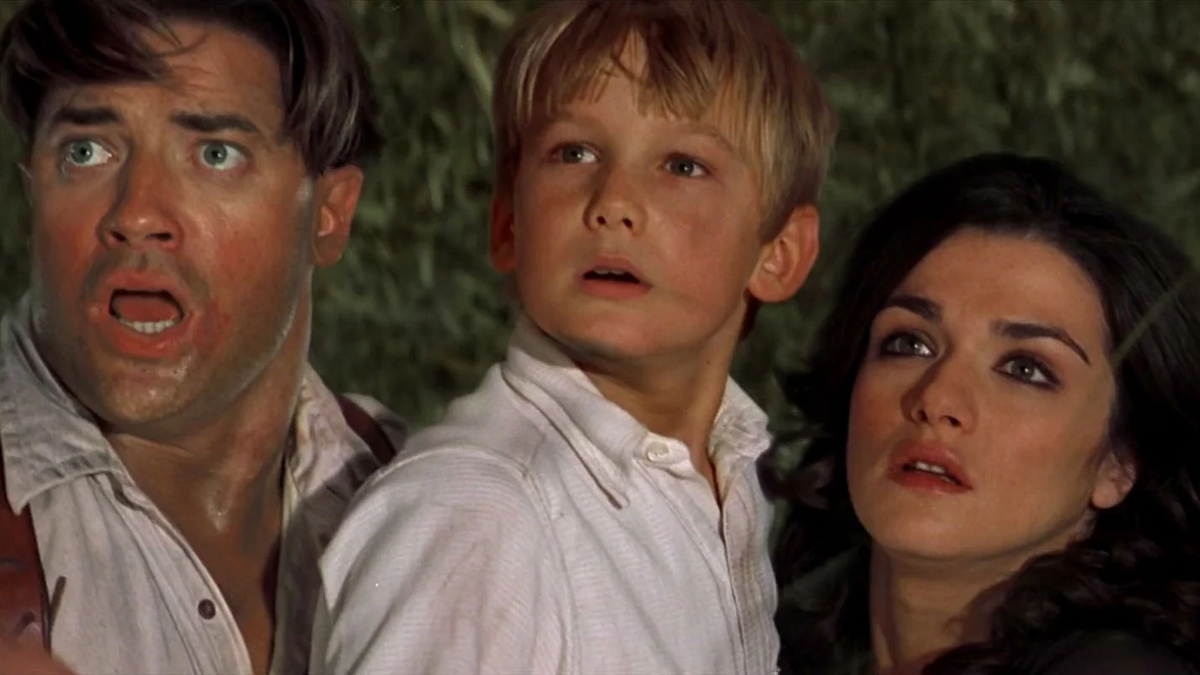 The evil mummy Imhotep returns to wreak havoc as he resumes his relentless search for power and immortality. To make matters worse, another ancient evil has been unleashed, even more dangerous than Imhotep. Only the heroic Rick O’Connell and his intrepid Egyptologist wife stand in the way of these twin terrors as they embark upon a desperate mission to save the world.

Inspired by the legendary Egyptian warrior, “The Scorpion King” is set 5000 years ago in the notorious city of Gomorrah, where an evil ruler is determined to lay waste to all the nomadic peoples of the desert. The few remaining tribes, never natural allies, have to unite or perish. Knowing their enemy relies on the visions of a sorcerer, they hire a skilled assassin, Mathayus (The Rock), to eliminate the visionary.

Cursed by a devious sorceress, China’s ruthless Dragon Emperor (Jet Li) and his vast army lie buried in clay for millennia. When young archaeologist Alex O’Connell is tricked into reviving the emperor, he and his famous parents (Brendan Fraser, Maria Bello) must find a way to send the ghoul back to the grave before he can awaken his vast army and take over the world.

Big Enos (Pat McCormick) wants to drink Coors at a truck show, but in 1977 it was illegal to sell Coors east of the Mississippi River without a permit. Truck driver Bo “Bandit” Darville (Burt Reynolds) agrees to pick up the beer in Texas and drive it to Georgia within 28 hours. When Bo picks up hitchhiker Carrie (Sally Field), he attracts the attention of Sheriff Buford T. Justice (Jackie Gleason). Angry that Carrie will not marry his son, Justice embarks on a high-speed chase after Bandit.

Framed for a murder he did not commit, three-time speedway champ Jensen Ames (Jason Statham) finds himself at Terminal Island, the country’s toughest prison, but he gets an unexpected chance at freedom when the warden offers a choice: Compete in the Death Race as a mythical driver called Frankenstein, or rot in a cell forever. Riding in a car equipped with flamethrowers and grenade launchers, Ames must survive a gauntlet of vicious criminals to win his freedom — or die trying.