I never really cared about cars until after I bought my first one, but I’ve loved motorcycles for as long as I can remember. One of my earliest memories of wide-eyed motorcycle adoration was when a couple of kids down the street from me got mopeds. Are they bicycles? Are they motorcycles? They’re both! These were not unattainable things from a far off land; these were kids on my street, who were my age, riding things that looked similar to my bicycle.

I never got a moped, but I do now own an electric mountain bike, and it probably goes faster than those old mopeds ever went. Electric bicycles are getting bigger, faster, and more powerful. The line between them and motorcycles is starting to get blurry.

Segway (yes, that Segway) is selling a dirt bike now. Sorry, Dirt eBike. A dirtybike? It “sits in between mountain bikes and traditional dirt bikes,” and appears to be more mountain bike than motorcycle. So it’s like a moped without pedals. It’s a mo. 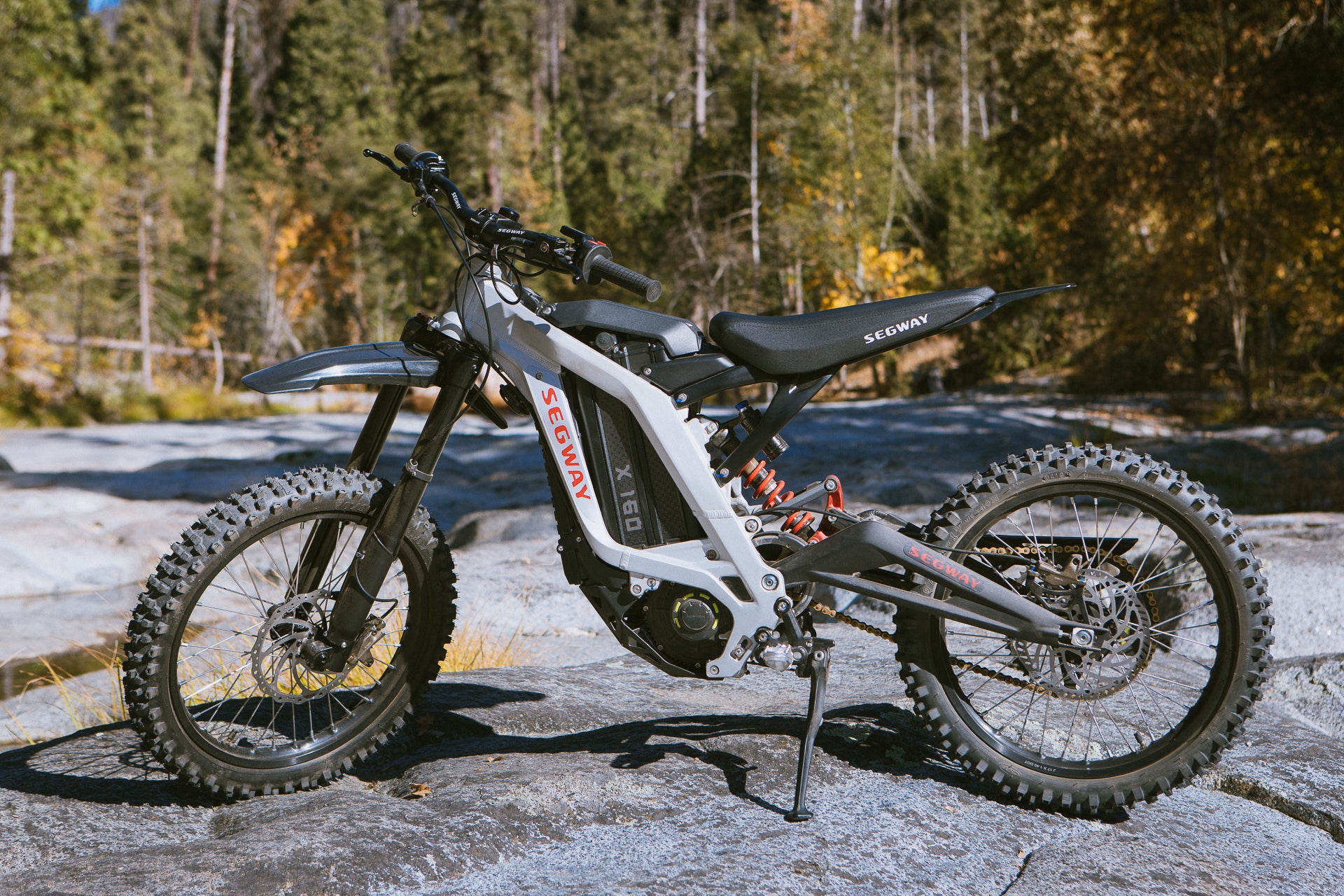 It is an evolution of the Sur-Ron Light Bee, which is a mountain bike based electric bike that is sold as“road legal”, but can be easily modified to put out almost seven times the 750-watt limit that many states have for bike lane use. You can also buy a pedal kit for it. Segway doesn’t appear to be pretending its e-bike will ever be road, or bike lane, legal. So the Sur-Ron is a “bicycle” (wink-wink), but the Segway will be a “motorcycle” (wink-wink).

Do you like cake? Of course you do, who doesn’t like cake? Cake is an electric bike company that will sell you the Kalk& which is an electric motorcycle similar to the Segway in that it has a lot of parts that seem to come from the bicycle world. But this one is a legit street-legal motorcycle with lights, mirrors, and a place for an actual licence plate.

Should You Get An Electric Bike?

When I first heard about electric bikes, they struck me as the ultimate life hack. They allow you to commute relatively speedily without the hassle of public transportation, to get exercise without getting overly sweaty, to get from point A to point B without spending money on gas. As a longtime urban cyclist who’d sworn off bike commuting after a move put a sizable hill between me and the office, I wondered if electric bikes were the answer. I decided to find out.

There are laws in many places about what power, speed, and features an electric bicycle can have and still use bicycle trails. This is why you often see bicycles with top speeds of 20 or 28 mph. There are several companies that will sell you an electric bicycle that exceeds these limits, or that can be easily modified to. My electric bicycle was limited to 20 mph before five minutes and a screwdriver turned it into 46 mph, which I do not recommend. Many of these bikes have pedals or kits to add pedals, which doesn’t really help to differentiate the bicycles from the e-bikes, or from the mopeds or motorcycles. 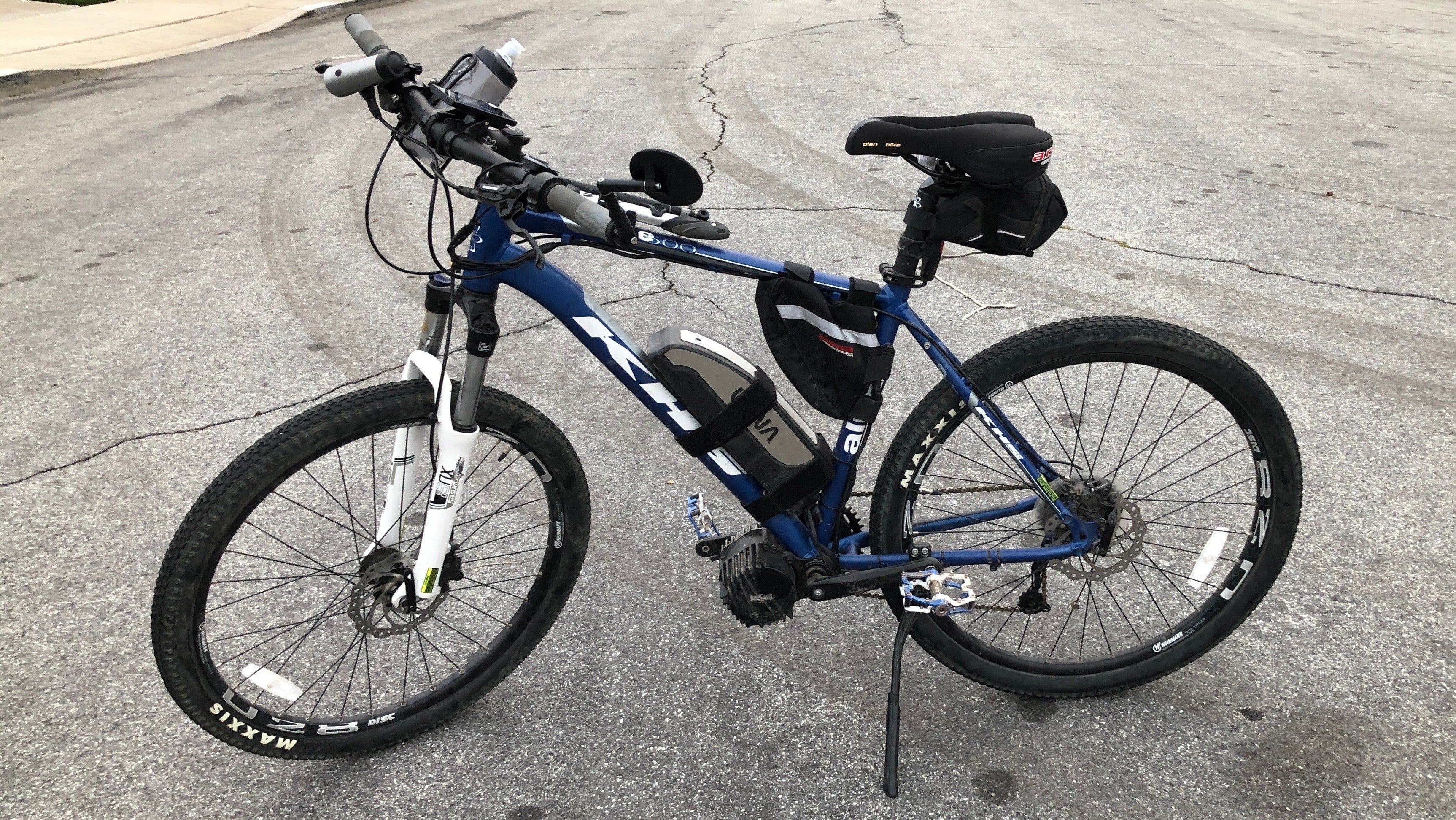 One of my “motorcycles”. This will break every speed limit in my town. (Photo: Matt Brown)

As batteries get smaller and power increases, it is going to be harder to tell the difference between an electric bicycle and an electric motorcycle. States are drawing the line with limits on power output, speed, and labels that indicate legal compliance.

I wonder if we even need a split between the two. As Bradley suggested earlier, more powerful electric bicycles might be a great solution for many commuters. If we want to limit congestion and pollution, maybe we should encourage people to ride bicycles that span the definition of bicycles and motorcycles. Maybe it is ok for a lightweight electric bike to go 20mph on a bike path, then turn onto a 35mph street and continue at a faster pace. Maybe not, but I bet we’re going to find out.

Just be sure to wear motorcycle safety gear.