The Case For Simmering Your Fish 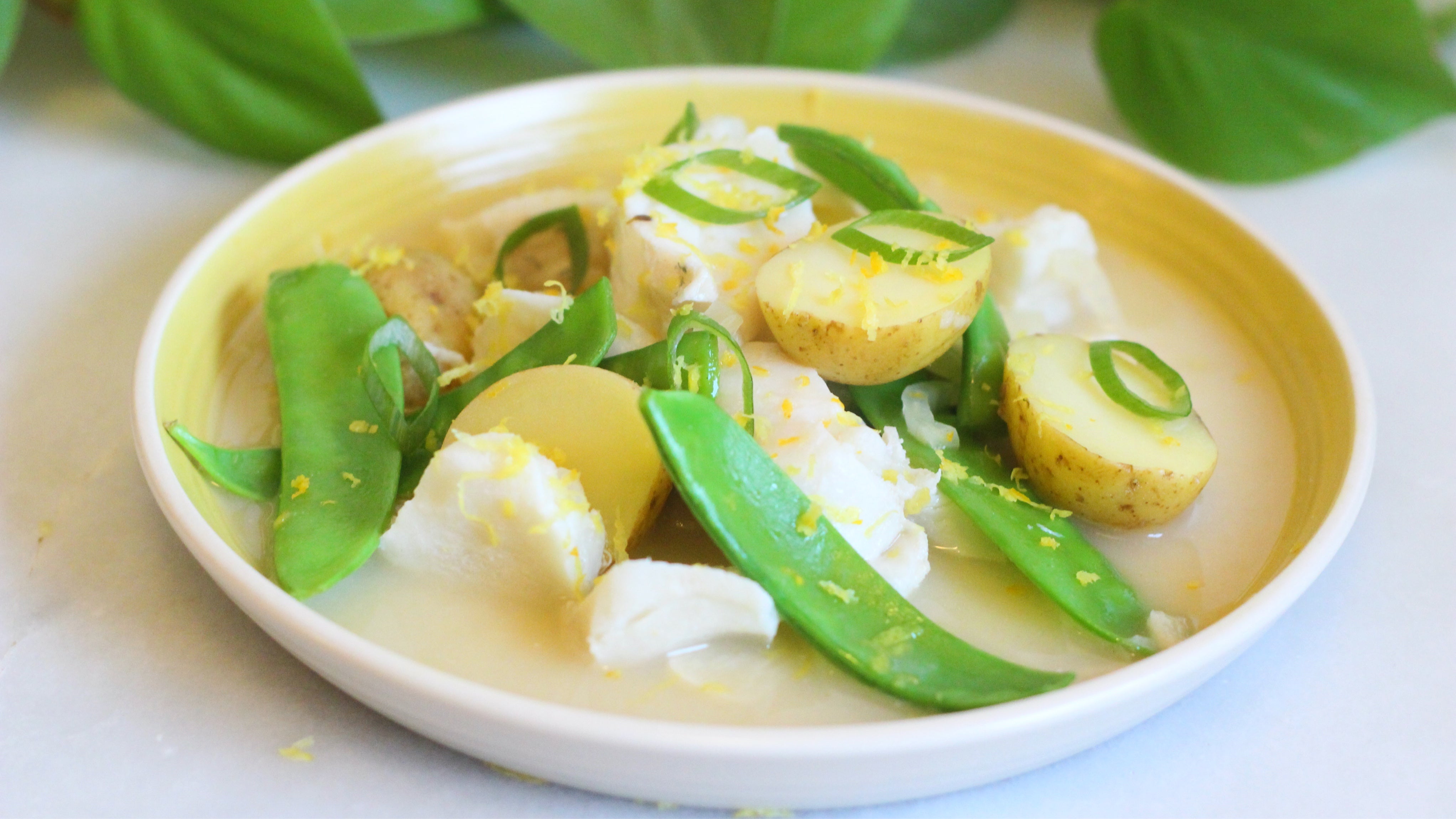 As a recipe writer (and eater), I can get overly focused on developing super-savoury, heavily-browned, rich dishes. The flavours brought into being by searing, caramelising and other non-enzymatic browning processes are delicious but they aren’t the only way to make something taste good. And sometimes it’s nice to take a kinder, gentler approach, especially when you’re cooking fish.

Simmering a filet of firm white fish—such as cod or halibut—in a seasoned broth cooks it through and infuses it with flavour without drying it out (even if you cook it a little too long). It’s also a very adaptable one-pot meal—just chuck a few baby potatoes in there 10 minutes before the fish, and a quick-cooking vegetable in with the fish. Your carb and veg are taken care of, and you have a light but still filling dish with delightful bistro vibes.

In terms of the cooking broth, there are a lot of directions you can take it but err on the overly flavourful. If you don’t know where to start, make sure you have an allium (such as garlic, onion, or shallot), a source of salt (at least 1/2 a teaspoon of salt, or a tablespoon of soy sauce or fish sauce), some herbs, and a little bit of sugar, honey, or some other sweetener. Wine also helps.

The liquid should taste slightly over seasoned on its own, making it the perfect foil for starchy potatoes and mild, flakey fish. A ratio of eight ounces of fish and five ounces of potatoes to a cup and a half liquid is just enough to keep everything submerged in a small Dutch oven but not so much that it turns into a soup.

Because you won’t be searing, you’ll want to get a little bit of umami elsewhere. I used both miso and a bit of tomato paste in the recipe below and I was very please with how it turned out. (Feel free to put your own spin on it with different broths and add-ins; the cooking times will remain the same.) To make a very large serving for one or a reasonable amount for two, you will need:

Add olive oil, garlic, lemon zest and salt to a cold Dutch oven and turn your burner up to medium. Let the garlic and zest cook undisturbed for about five minutes, until it starts to turn golden brown. (Keep a close eye so it doesn’t burn. I don’t know how enthusiastic your burner is.)

Cook for a minute more while stirring, then add the tomato paste and continue to cook until the paste turns a dark brick red and looks fairly dry. Deglaze with the wine, scraping up any fond with a wooden spoon, and let reduce for two minutes.

Add the water, miso, thyme, honey and potatoes, then bring to a boil over high heat. Reduce to a simmer and let the potatoes cook until they are almost done (can be pierced with a knife, but still fairly firm).

Add the fish and peas, cover and cook for about four or five minutes, until the fish is cooked through and the peas are bright green. Serve immediately in a shallow bowl and garnish with more zest, some sort of green oniony thing, or both.