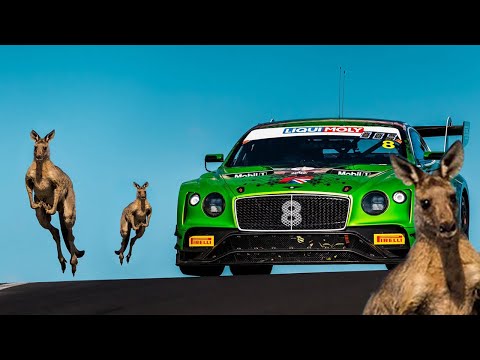 Down in Bathurst, V8 Supercars and GT cars alike have been racing for years at Mount Panorama Circuit and this weekend at the Bathurst 12 Hour was no different. Except this year, the endurance racers were joined by a few of the locals for qualifying.

The race ended this morning Australia-time with a win for Jules Gounon, Jordan Pepper, and Maxime Soulet driving for Bentley Team M-Sport in a debut for their #7 Bentley Continental GT3 car. The Bentley eked out a win after suffering a flat late in the race and battling it out with the #999 Mercedes-AMG GT3 Evo driven by Maximillian Buhk, Filippe Fraga, and Rafaelle Marciello. Mechanical troubles late in the race bumped the Mercedes down to sixth once the checkered flag was out.

And while Bentley Team M-Sport is no doubt psyched to have come out of the race on top, the real excitement came on Friday during qualification and a little earlier in the week during the practice sessions when, welcome or not, kangaroos managed to slip through and share the track with the drivers.

Being fairly common in the region where Mount Panorama Circuit is located, kangaroos have joined the action at Bathurst in the past as well, both during GT and V8 Supercar racing. While there were some rather nasty collisions during both practice and actual racing this year at Bathurst, it doesn’t appear that any of those involved the marsupials, though others have rather less lucky in the past.

Back in 2015, the track brought in snipers to try and control the kangaroo population and keep them far from the racing action. It seems like any efforts to keep the ‘roos off the track this year haven’t quite been as successful.

Some of the commentators you can hear in the video above explain that the kangaroo population in the area has been dealing with limited food sources as the grasses they ‘roos typically eat have been ravaged by the recent drought conditions as well as the resulting wildfires. The area around the track has been relatively well-cared-for compared to the surrounding area, drawing in more wildlife.

In any case, the kangaroos are just another reason the Bathurst 12 Hour is one of the more exciting events on the endurance racing calendar. Though there’ll be plenty of racing between now and then, it’ll be interesting to see whether the ‘roos stick around come the Bathurst 1000 Supercar race this October which is when we’ll likely check in to Mount Panorama next.