The fast food industry has a truth-in-advertising problem. And it’s probably a lot worse than you realise. These side-by-side photos show why you should never trust the marketing.

Takeaway Truth was a popular Lifehacker feature where we compared fast food advertisements to cold, hard reality. While a little artistic licence is to be expected, sometimes the differences between the poster and the real thing are ridiculous. Today, we take a look back at some of the worst offenders of all time. Look upon thy works, Ronald McDonald, and despair.

You can click on the product name to read the full, original review.

“One of the most glaring discrepancies is the size of the top buns. In the poster, it’s completely dwarfed by the larger-than-life ingredients — it almost looks like the McMate is wearing a little bread hat. In reality, the bun takes up a lot more real estate.”

“The most glaring difference is the lack of visible corn chips — instead of popping out like individual hors d’oeuvres, the chips were all buried at the bottom of the box. Nachos? It looks more like week-old garbage mixed with surgery leftovers.”

“Wow. Just look at it. The only ‘whopper’ in that photo is the big fat lie Hungry Jack’s is selling us. Terrible.”

“With apologies to our Spanish-speaking readers: Cagaste y saltaste en la caca!!! It looks like Gilbert Kane’s ruptured stomach after the xenomorph burst through it in Alien .”

“Oh dear. Someone appears to have sat on our burger. This is unacceptable.”

“The colours are wrong, the quantities are off and the bacon looks more like grated beef jerky. Are these even the same ingredients? I’m genuinely not sure.”

“There’s clearly an implication that this is a colossal burger — perhaps the biggest you’ll ever wrap your hands around. In reality, it’s not much bigger than a Big Mac or Zinger. In other words, the poster is still fibbing even if you don’t take the burger’s scale literally.”

“Hmmm. While the real thing is by no means disgusting, it’s also significantly less attractive than the advert would have us believe — even if you ignore Kate Upton.”

“Eew. The most glaring difference between the two images is the avalanche of lettuce smothering the real tacos. The advertising image has none. I specifically requested that my tacos be made to look like the poster with no extras, so I’m not sure what happened there.”

“The English Brekkie Wrap fell apart the moment we opened the packaging while the Bacon, Egg and Tomato stuffed everything into the bottom half of the wrap. We were also disappointed by the distribution of ingredients – instead of marrying everything together, the egg, sausage and bacon were all shoved in separately, which created a layered effect. This made it nearly impossible to taste everything in one bite, an issue that the poster image clearly doesn’t suffer from.” 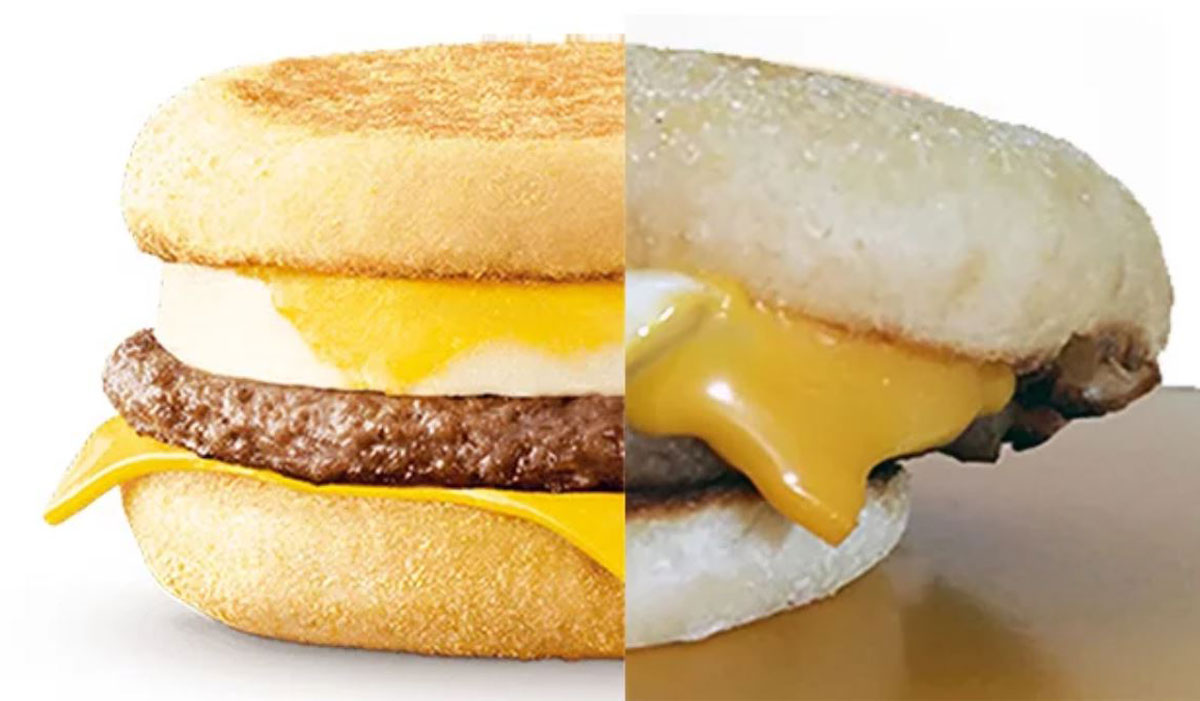 “It would seem that McDonald’s sloppy burger making practices have also infected the breakkie staff. Our McMuffin was a hastily slapped together mishmash of mutant-looking bread. A lazy effort.”

“As you can see, the real Big Aussie isn’t a patch on the promotional image. This usually comes down crap burger assembly, but on this occasion there certainly seems to be markedly fewer ingredients.” “I feel it’s worth noting that I specifically asked the “sandwich artist” to make my sub look like the one on the poster.” “The coleslaw looks completely gross and bears almost no resemblance to the poster. In place of the lovely medley of carrots, cabbags and mayo, you get a swamp of glistening, unidentifiable lumps which look suspiciously like hocked-up loogies. Lovely.”

“The most obvious difference between the two images is the crusts — the marketing image has toppings spilling right to the edge, whereas the real version has an expanse of empty real estate. While this could be due to a trick of perspective, it still gives a false impression of a more toppings and less crust.” “The McMate Chicken didn’t come with bacon as advertised. Presumably, this was an innocent oversight by a staff member but it’s not the first time we’ve had this happen during a McDonald’s Takeaway Truth.” “Oh dear. It would seem McDonald’s was barracking for Australia to bomb in the World Cup, if this burger is anything to go by. Disgustingly sloppy assembly, a noticeably smaller chicken patty and an inexplicably deformed bun all conspire to make this a truly awful burger. Instant red card.”

KFC, that’s just rubbish. Where are the charred grill marks so prominently displayed on your poster? The size of the chicken piece is also considerably smaller and the chips look soggy and under-cooked.

We suppose the Deluxe Country burger isn’t too bad — if you ignore the almost complete lack of salad and the fact that the meat patty looks like a dog poo. (These are difficult things to ignore, admittedly.)

Even allowing for the advert’s soft focus and superior lighting, it’s obvious that the real tortilla isn’t quite up to snuff. It has a prominent oily sheen and the bread’s texture is flimsier looking. The filling also appears to be less generous resulting in thinner quesadillas.

Do we really even need to critique this? There’s barely any resemblance between the two burgers.

Our Pepperoni & Parmesan Pizza wasn’t nearly as sumptuous looking as we were led to believe by Domino’s marketing material. The grated parmesan is barely visible, the pepperoni has been laid with less care (there’s also less of it) and the mozzarella is far less generous. There’s no hiding the fact that these burgers fail to measure up to the advertised image — the chicken patties look thinner, the buns aren’t as plump and the salads are a bit measly across the board. Collectively, the McDonald’s Chicken range is pretty fowl.

When there’s no hot woman to distract you, it becomes blatantly obvious how misleading the Nando images are. The Pequeno Mini Chicken Pita is especially deceptive: the reality is a limp, soggy pocket of sadness with none of the vibrant fillings depicted in the advertisement. This is especially galling when you consider Nando’s positions itself as an ‘upmarket’ fast food restaurant, with exorbitant prices to match.