Remember These Foul (Yet Often Forgotten) Places in Your Seasonal Cleanup

8 Surprising Ways to Use Up That Half-Empty Can of Pumpkin...

You Should Spike Your Shirley Temple

How to Deal With Living in a State of Perpetual Crisis

Facebook is letting users test out a beta version of its upcoming redesign, which is slated for a full rollout later this year. You can enable the new look by logging into Facebook and selecting “See Facebook Beta” at the top of your news feed—the option may not be available to everyone, though.

If you don’t see the option in your news feed, you can also try clicking the arrow icon in the upper right and selecting “See Facebook Beta” from the drop-down menu.

The updated UI rearranges and simplifies Facebook’s interface, makes it easier to open Messenger conversations, and drops in new icons and buttons. You’ll get a quick tour and explanation of the changes the first time you enable the beta design, as well as a chance to swap to Dark Mode if you’re interested. 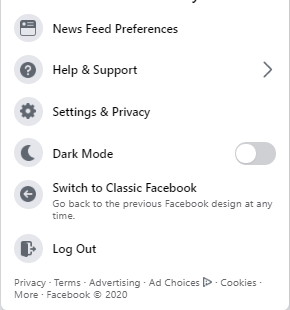 If you turned on the beta redesign but aren’t feeling the new look, you can undo the changes and get the “classic” Facebook UI back easily. Just click or tap your profile picture in the upper-right of the page to open the quick menu, then select “Switch to Classic Facebook.” Facebook actually shows you how to do this when you first turn on the new design, but it’s worth pointing out in case you forgot or didn’t catch where the setting was.

Changes like this can prove divisive, so it’s cool Facebook lets users go back to the old site design if they want. How long you’ll be able to keep using the old interface is unclear, but I’d suspect it’ll be possible to revert back as long as the new design is in “beta.”