With the recent reports that North Korea have the capability to fit a nuclear bomb in an intercontinental ballistic missile, and the bromance thawing between Kim Jong-Un and Donald Trump, I’m beginning to wonder about just how powerful nuclear bombs actually are. It’s hard to visualise the scale of their power, unless you can put it in terms that you actually understand.

NUKEMAP is a website that utilises Google Maps to display the ramifications of a nuclear detonation anywhere in the world. It was created by Alex Wellerstein, a historian of nuclear weapons, in 2012 and has been updated numerous times since.

In a statement from the website, Alex describes the reason for creating the map:

The NUKEMAP is aimed at helping people visualize nuclear weapons on terms they can make sense of — helping them to get a sense of the scale of the bombs. By allowing people to use arbitrarily picked geographical locations, I hope that people will come to understand what a nuclear weapon would do to places they are familiar with, and how the different sizes of nuclear weapons change the results.

It’s important to highlight that first sentence. The major goal of NUKEMAP (and this article) isn’t to be alarmist. It’s not to strike fear into your heart. It’s not about warning you of a coming nuclear winter. It’s about understanding the exact magnitude of a nuclear blast and how damaging it can be.

This is largely affected by the ‘size’ of the weapon, which refers to its yield: The amount of energy that is released when a nuclear bomb is detonated. It is expressed in the ‘TNT equivalent’, a convention that describes the energy of an explosion. Nuclear bombs are expressed in kilotons, which is the equivalent of one thousand tons of TNT. That’s a huge amount of explosive energy.

NUKEMAP provides a few different readouts for each map with colour coded rings :

The most recent bomb tested by North Korea was reportedly around 50 kilotons. So if we used that as a base, what would the damage from a 50 kiloton nuclear bomb do to:

If a nuclear bomb of this size were to drop over the harbour bridge, then the bridge would be completely engulfed by the nuclear fireball. The amount of pressure emanating from the explosion would destroy Luna Park, most of Kirribilli, including the Prime Minister’s residence and the Opera House. Circular Quay would see an extreme amount of damage and radiation. Darling Harbour wouldn’t be subjected to quite the same amount of instantly fatal pressure, but anyone in the area would still be badly injured. 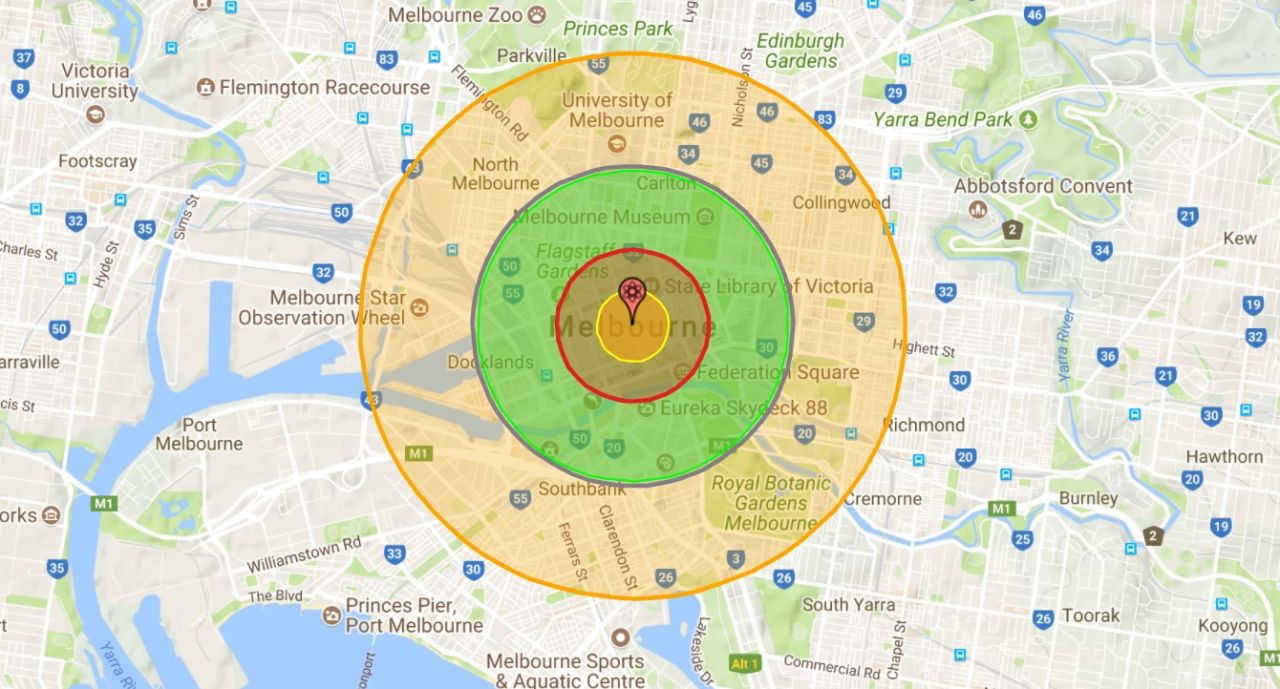 The size of the nuclear fireball would destroy Melbourne’s CBD and the resulting pressure from the explosion would flatten the land around it. Most of the iconic landmarks in Melbourne’s inner city would be gone. 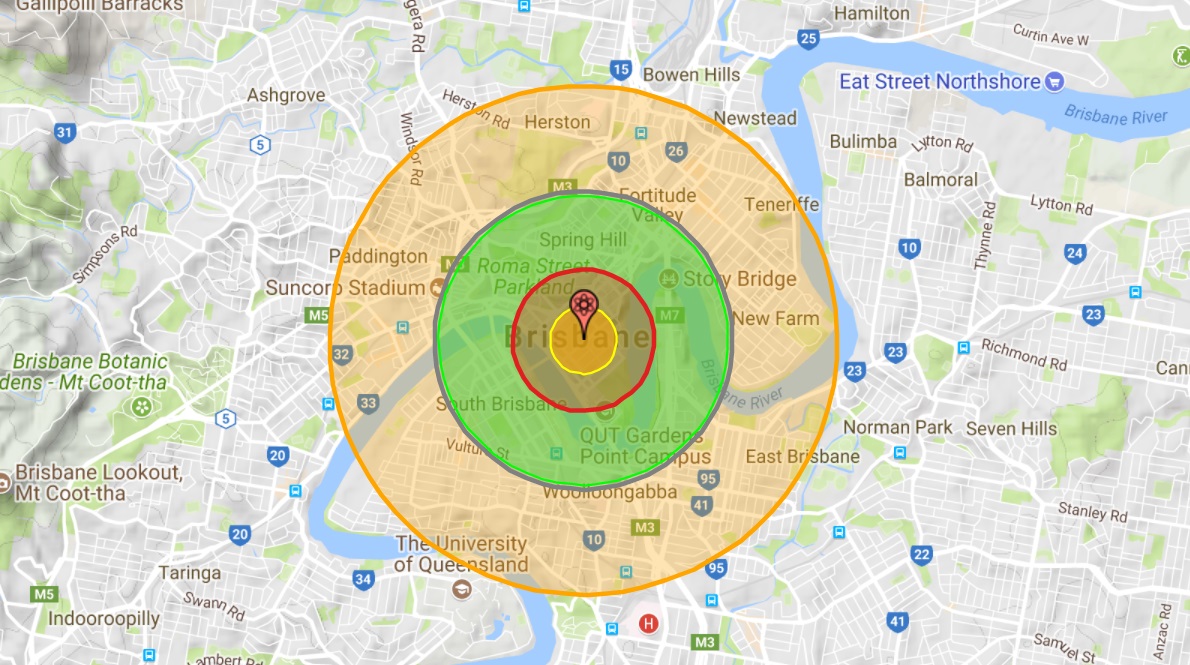 Brisbane City would be engulfed by the fireball and Suncorp Stadium would take a huge hit. Most of the bridges in the area would need to withstand huge pressures and the thermal radiation causing third degree burns would reach out as far as Fortitude Valley, one of the more busy night strips in Brisbane.

Adelaide’s CBD would be mostly non-existent, with the fireball engulfing a large portion and the overpressure extending from North to South Terrace. Rundle Mall would be hit hard and you wouldn’t expect Adelaide Oval to remain standing, either. The thermal radiation would extend out as far as the parade in Norwood and almost entirely cover North Adelaide. 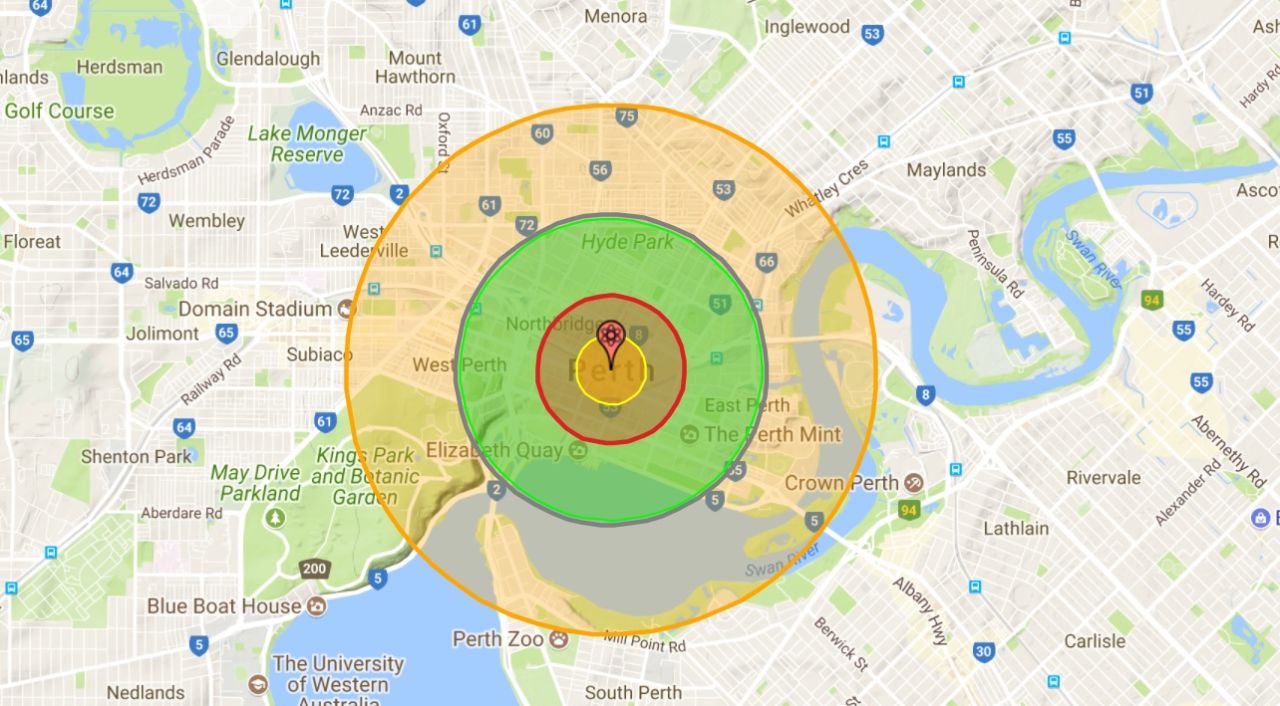 Owing to its place right next to the Swan River, Perth City may not see the same level of immediate fatalities but the destruction would be extensive. The thermal radiation ring would extend from the centre of the CBD out to the Perth Zoo and as far as Lake Monger. The famous Perth Mint would sadly be caught in the 5psi overpressure zone, a space where most buildings collapse.

Parliament House as a target, would be completely decimated by the fireball and the 20psi overpressure would flatten everything as far as National Circuit. The National Library, the National Museum and the National Gallery would also likely crumble under the pressure of the air blast. The Australian War Memorial and the Royal Australian Mint would fall just outside the thermal radiation zone. 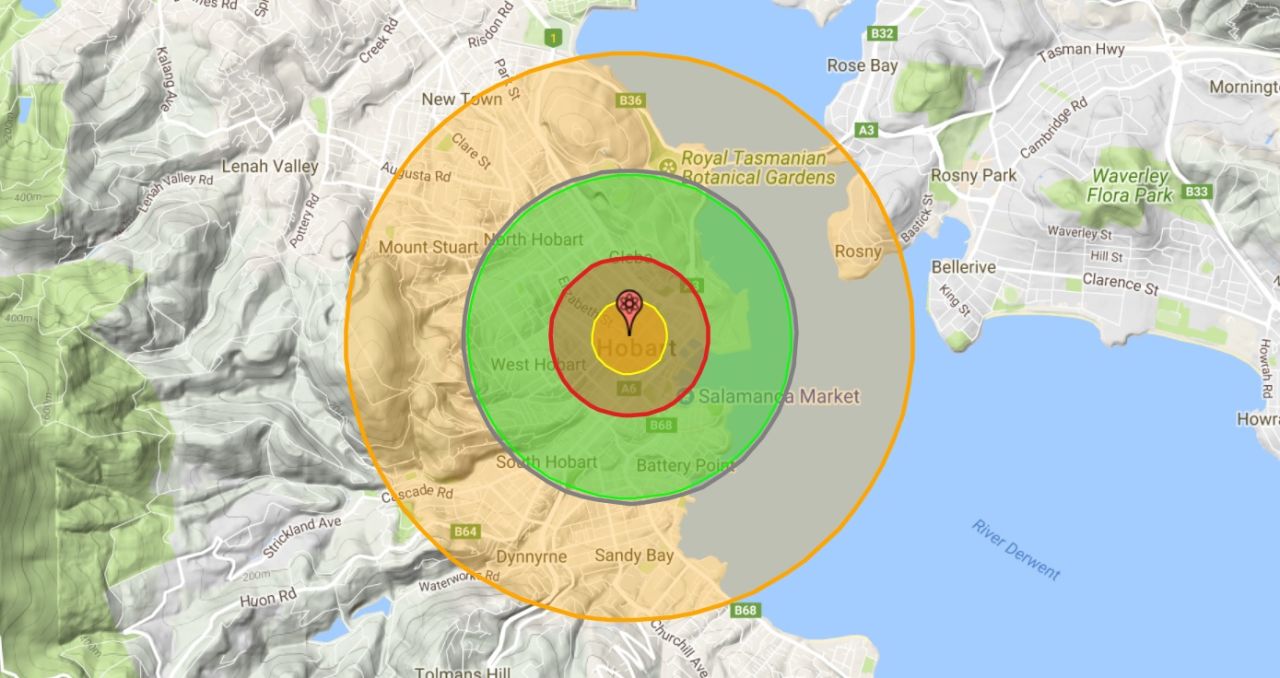 A direct hit on Hobart’s CBD would see a lot of the blast rip across the River Derwent. The fireball would circle most of the city, while the overpressure blast would extend up Elizabeth Street and out to the Salamanca Market. The Royal Tasmanian Botanical Gardens would receive a huge amount of thermal radiation, which would reach across the Tasman Highway bridge and into Rosny. 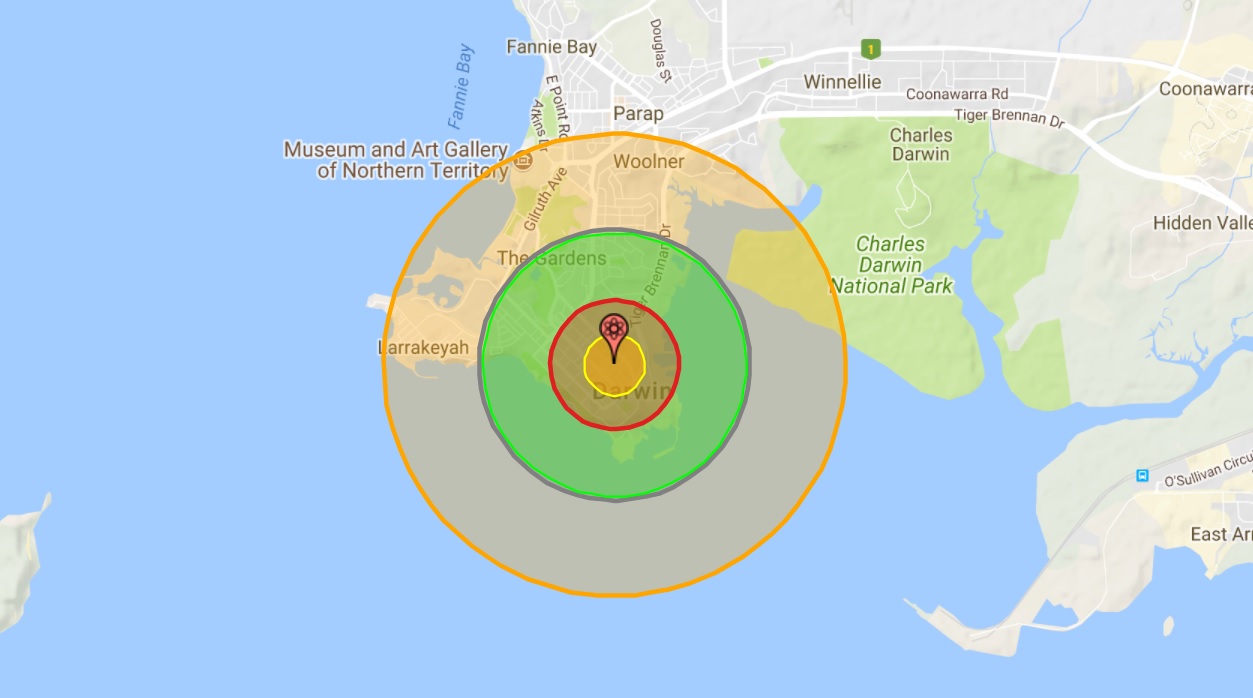 The size of an atomic bomb blast of this size would take out a lot of Darwin’s waterfront, but the thermal radiation wouldn’t extend all the way across Charles Darwin National Park but, provided it hit the CBD, the overpressure air blast would do incredible damage all the way through the city and across to the Gardens.

Of course, the likelihood of these locations being the target of nuclear attacks is low, and the idea that these are locations are of military value is even more ludicrous. I definitely can’t speak to the tactical side of warfare, nor do I want to.

However, I think NUKEMAP gives you a great understanding of just how exceptionally powerful a nuclear bomb is in terms that you can relate to – locations in the world that you are familiar with. NUKEMAP is also powerful enough to show you the effects of the nuclear fallout that may occur at certain locations and taking into account things like wind direction. It’s a great tool for fanciful visualisations and let’s hope that is all it ever needs to be used for.