For lovers of burgers and fast food, the legend of the “secret menu” is a tantalising one, promising a secret club of tasty, cheap and ridiculously over the top food. Only one fast food outlet has openly confirmed having a secret menu – and that’s the infamous In-N-Out, which is sadly not available outside of the US (unless you make your own). So how do we go for secret menus here, in the land down under? KFC has really taken the “secret menu” concept to a new level via its mobile app which contains hidden menu items like the ‘Hot Or Not’ burger – a double-fillet concoction with an Original Recipe and Zinger patty, plus spicy sauce, mayo, cheese, bacon and lettuce. However, the only way to get this burger is via KFC’s online ordering app. But what if you don’t have the app?

KFC has a few menu hacks available, but unfortunately their customisation options aren’t as broad as McDonalds. You can’t swap fillets around in the burgers, or add or subtract anything more major than cheese slices or sauce. There are, however, a few things you won’t find on the displayed menu.

Breast Fillet Box The breast fillet box is an item that used to be on the menu and has since been taken off. I have it on good authority from Lifehacker’s resident fast food expert, Chris Jager, that this box is still entered into KFC’s system, so you are still able to order it. The box should consist of two breast fillets, potato and gravy, small chips and a drink.

Add Bacon, $0.50 Adding bacon is listed on HackTheMenu as their top secret menu item. While bacon at KFC isn’t really a secret, it’s good to remember that you can add bacon to any item on KFC’s menu — burgers, snacks, boxes or more. It shouldn’t set you back more than 50 cents for the extra bacon, and all you have to do is ask to add bacon.

McDonalds has the most outrageous ‘secret menu’ claims of any fast food chain, but it also has the longest history of denying that a secret menu exists. This is potentially thanks to the same laws that require anything on the menu to have nutritional information available for customers to see, which would become problematic if a ‘secret menu’ was officially recognised. The idea of it was resoundingly denied when it came up as part of Maccas’ “Your Questions” campaign:

Extra cost is right. Many of the American secret menu items listed on sites like #HackTheMenu are intended as cost-saving measures, which may be true over in America. Here, however, Maccas will charge you for any extras added, but won’t deduct price if you take ingredients off a burger. That being said, I’ve wrapped up how much some of the most popular secret menu items will cost you here in Australia. Ordering is made even easier with the kiosks that have been installed in each store, allowing you to edit the ingredients on each burger. You can even order these delicacies online for delivery — although the quality of service varies. 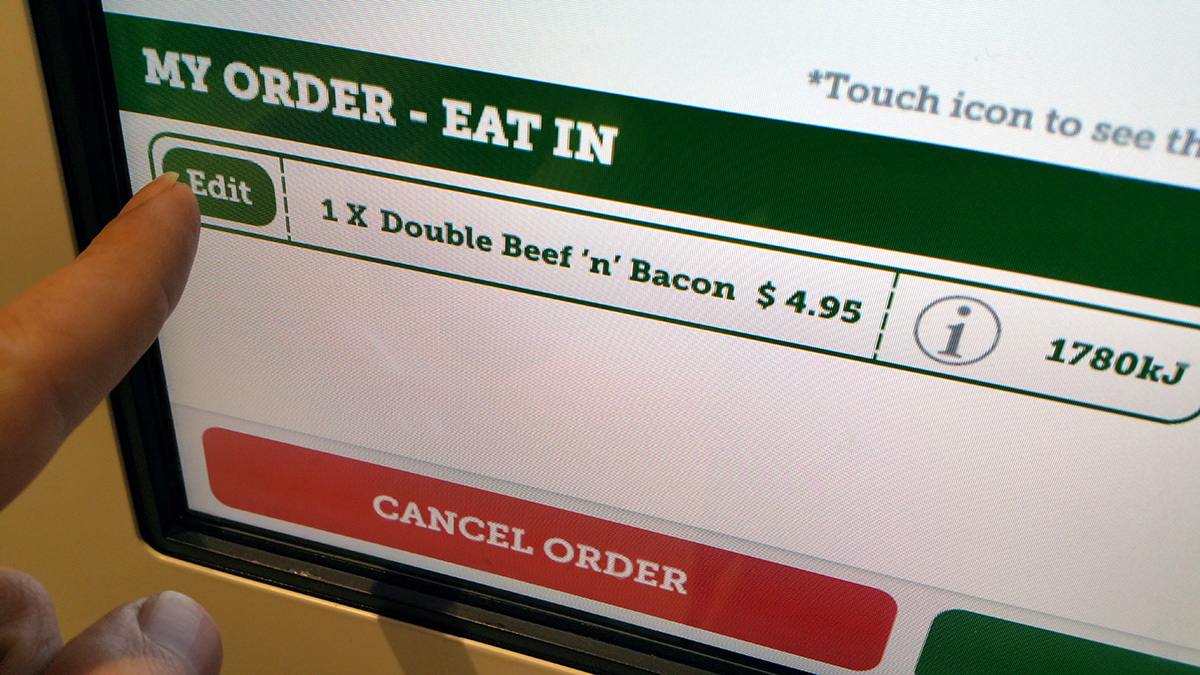 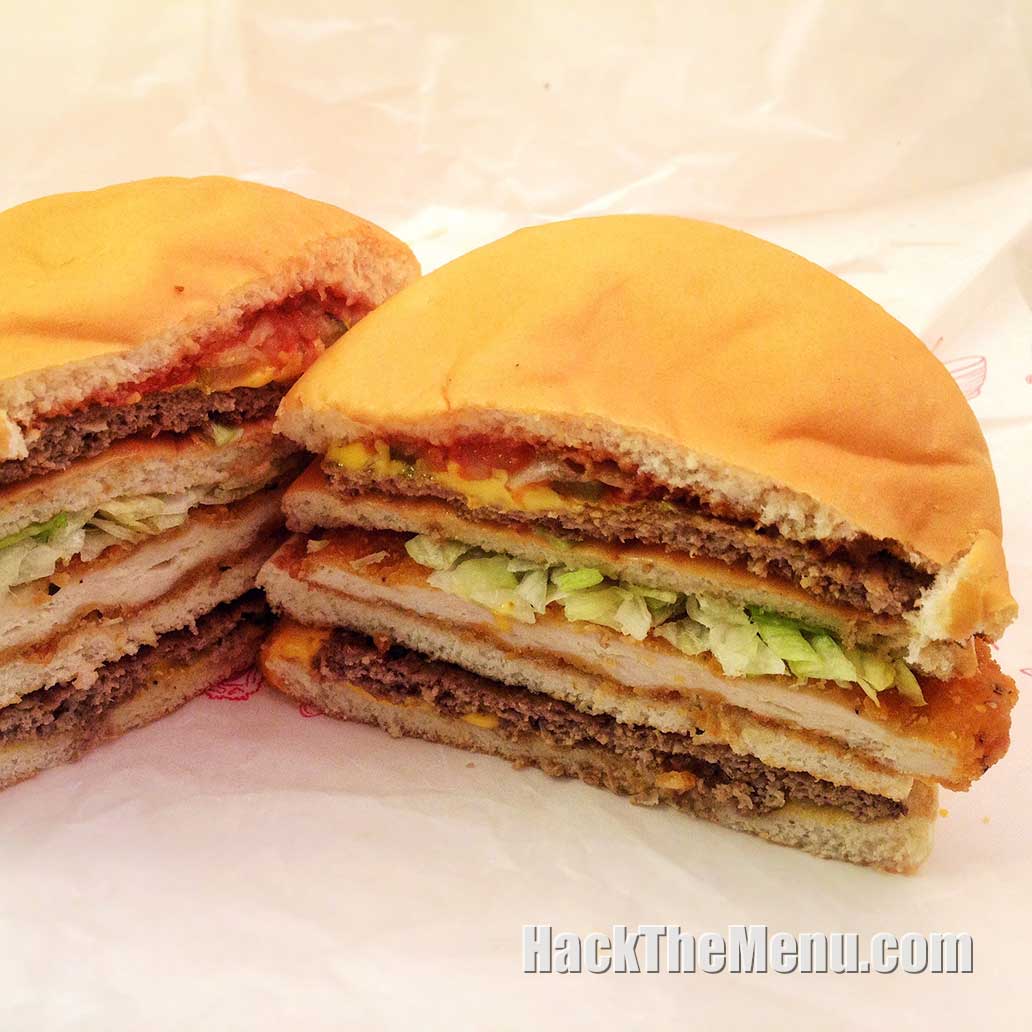 Possibly one of the most famous McDonalds secret menu items, if the most distastefully named one, the McGangBang is a Double Cheeseburger with a whole McChicken sandwiched between the burger patties on the Double. #HackTheMenu’s instructions tell you to buy both a double Cheeseburger and a McChicken to assemble this, which would come out at the princely sum of $10.60, but if you don’t mind missing out on the bun part of the McChicken then you can assemble the McGangbang for just $6.50.

All you have to do is order a Double Cheeseburger and add a McChicken fillet, McChicken sauce and shredded lettuce. No guarantee your local Maccas staff will put it together in the ‘proper’ order, but it should still taste the same as the real deal. 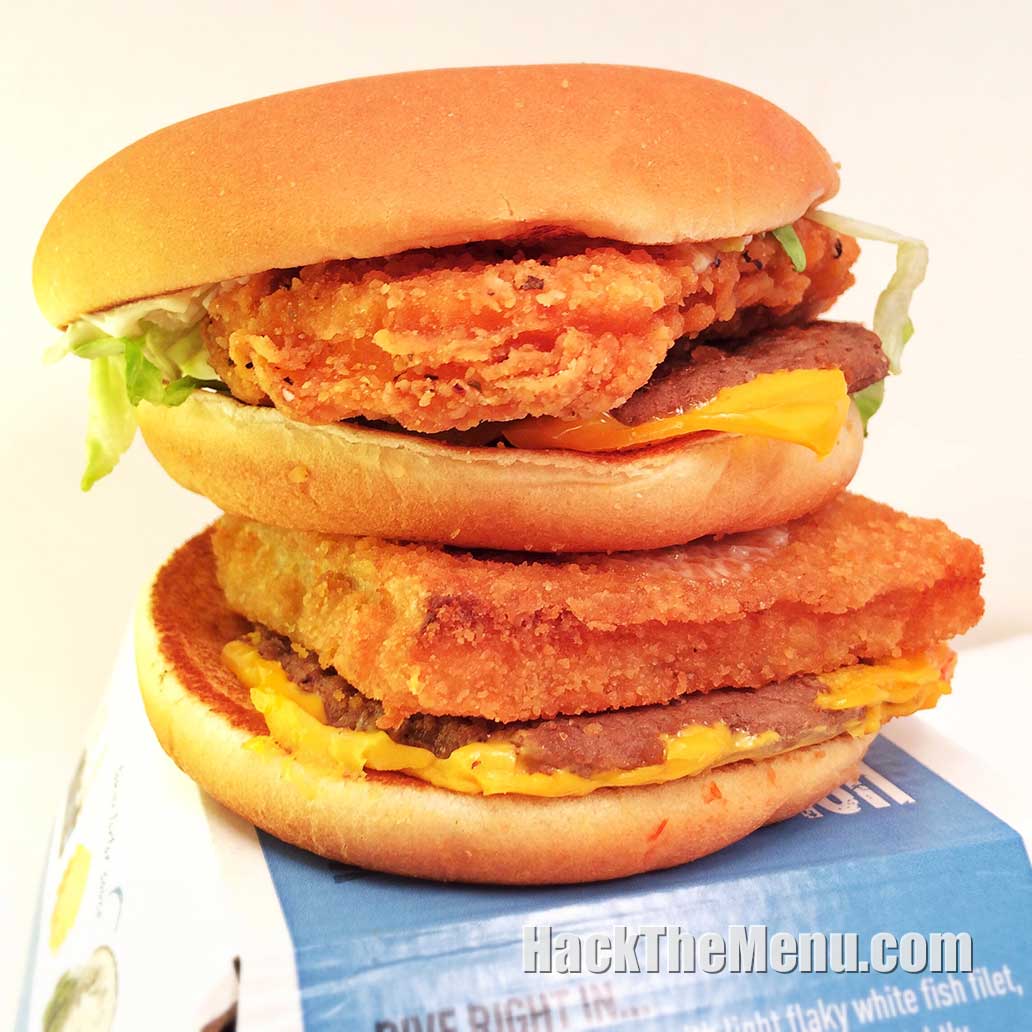 Another legendary secret burger, the Land, Sea and Air Burger has beef, chicken and fish in it, as you might expect from the name. It’s a bit of a mouthful to order even by the secret name, however, so you might as well just be asking for a “Big Mac with fish and chicken.”

To make this monstrosity, order a Big Mac and add a McChicken fillet and a fish fillet. Easy! It should set you back around $8.90. 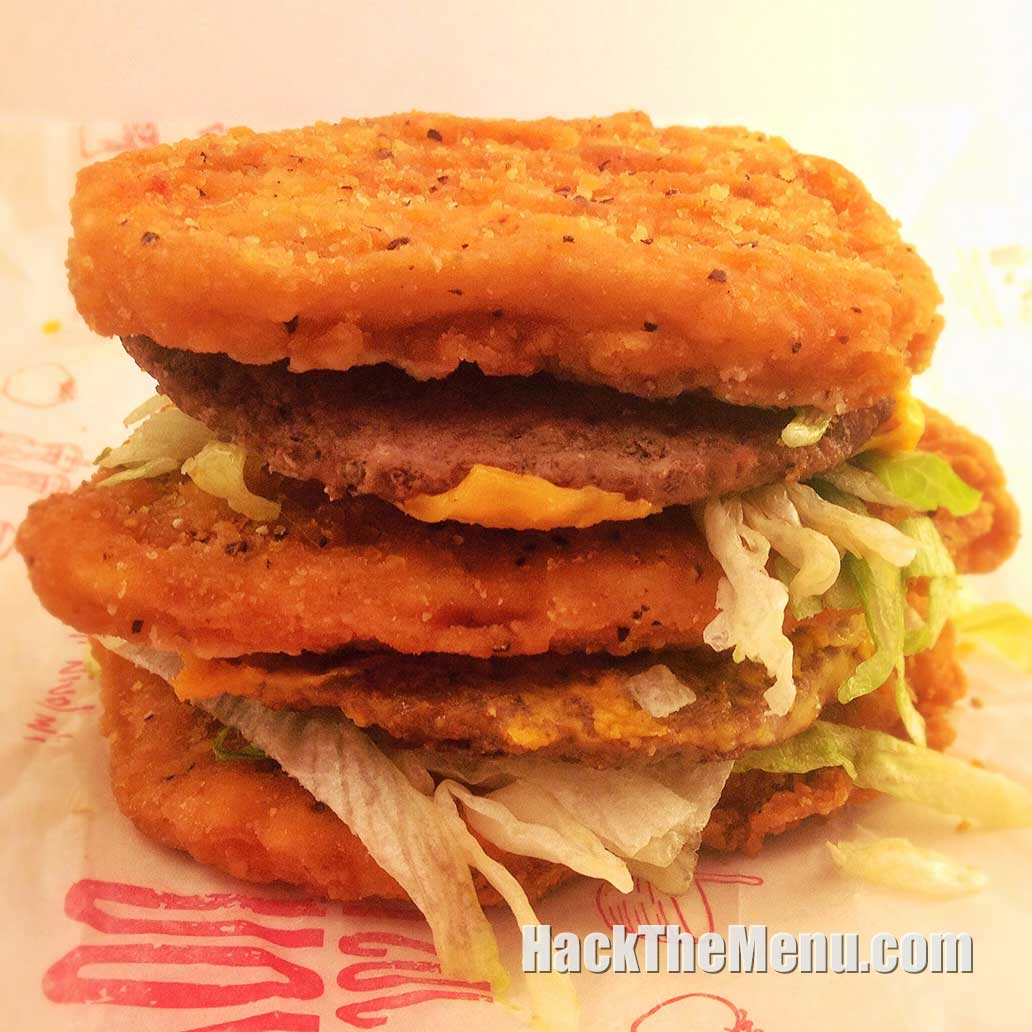 The KFC Double Down has nothing on this chicken monstrosity. For the carb-phobic, it’s a protein (and fat) heavy alternative to the Big Mac, where all three burger buns are replaced by McChicken fillets. This is also one of the most expensive secret menu items, but you’re getting a lot of bang (read: meat) for your buck.

To order the Big McChicken, order a Big Mac, subtract the buns and add three McChicken fillets. It should cost around $10.70, but may require some assembly to put the chicken fillets in the right places.

The ‘Protein’ Burger ($8.95+) If you’re ordering from McDonald’s Create Your Taste menu, you may have noticed the option to substitute burger buns with lettuce. You can request the same hack at the counter and the result is a light and refreshing garden wrap that’s easy on the carbs. It is, however, fantastically messy. 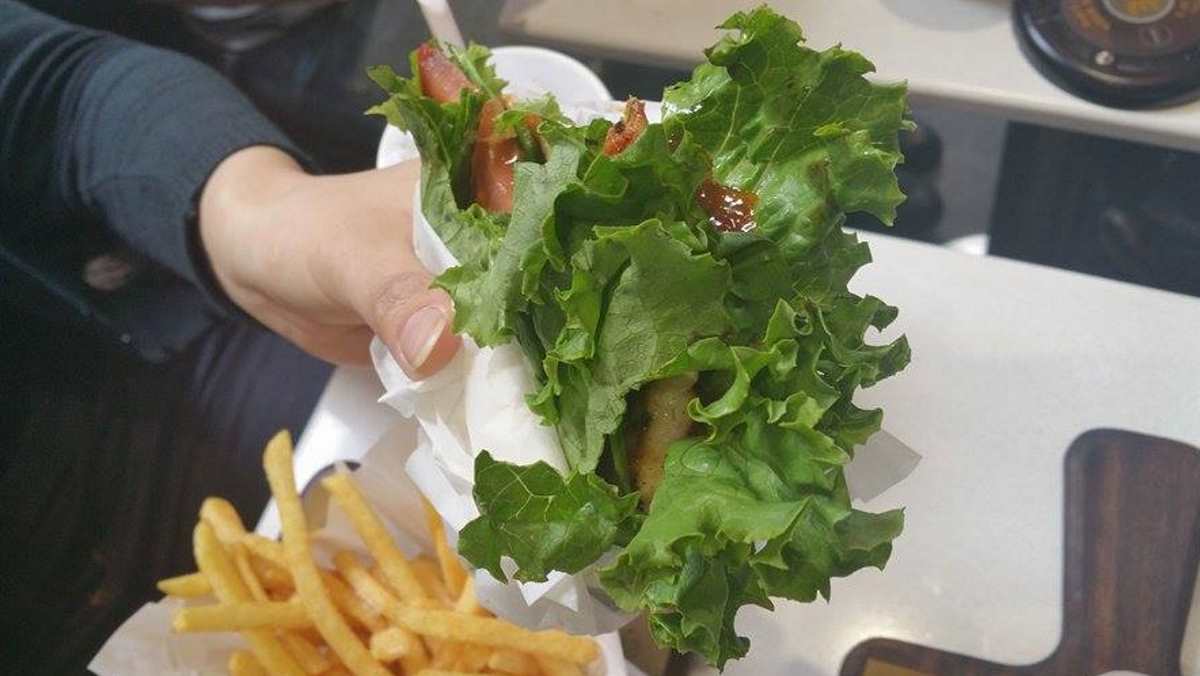 Grilled cheese burger Another regular fixture that isn’t on the menu — this is basically a cheeseburger with everyone removed except the cheese. Kids love ’em, but they also make a good snack when you’re after something cheap and light. 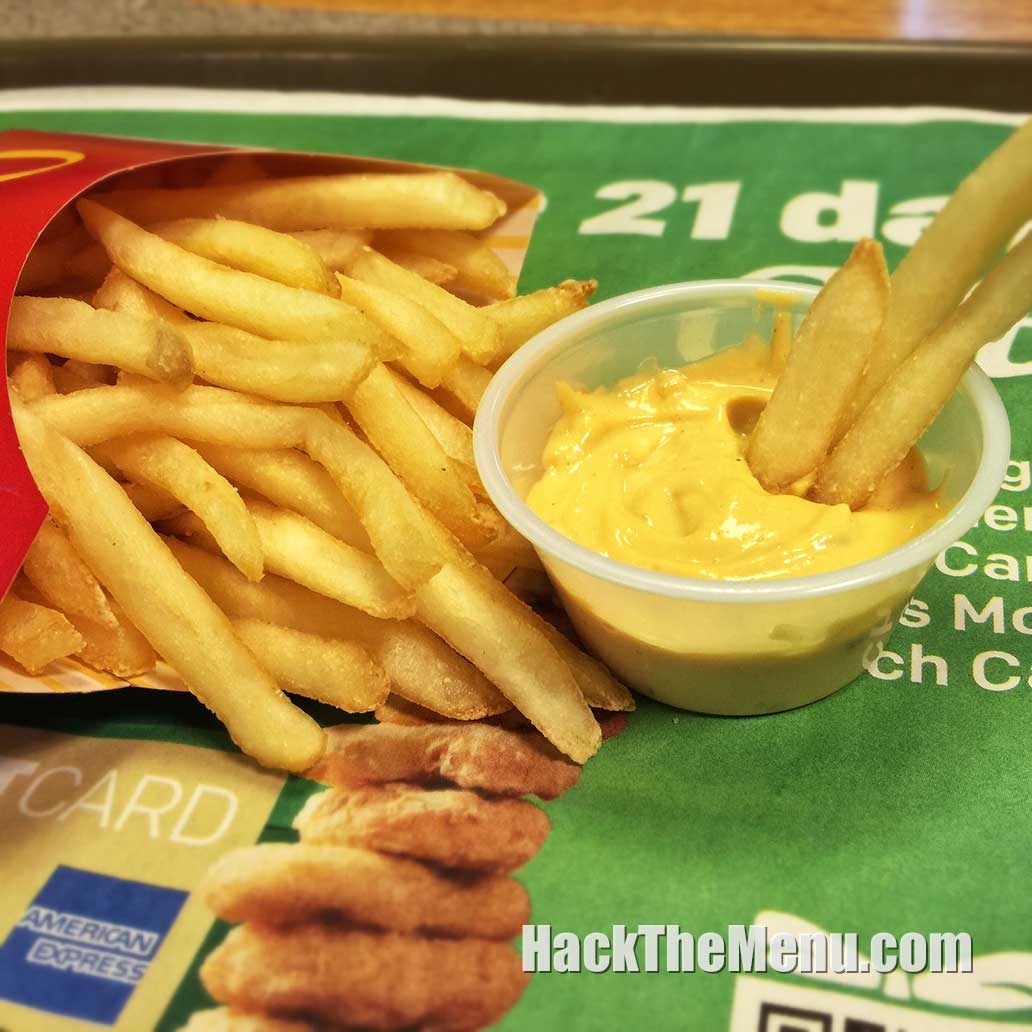 On Californian chain In-N-Out’s secret menu is an item called ‘Animal Style Fries’, which are fries with their special sauce and chopped onions. For a McDonalds style version of this delicacy, try asking for your fries with a side of Big Mac sauce. Apparently some restaurants will just give this to you for free, but if they charge you extra it should be around 40c for a serving of sauce.

This was another one mentioned on HackTheMenu, which is a shake with chocolate, vanilla and strawberry flavours in the one cup. It seemed a simple enough ask, but when I ordered it in store, they said that the machine ‘didn’t work that way’. Still, I imagine the success rate of this hack largely depends on the employee who happens to serve you. Peri-Tamer Sauce, free The Peri-Tamer sauce is a mild marinade used at Nandos mainly on the kids menu. You can, however, request to have this mild sauce on any of your adult meals. It’s not listed on the menu as an option, but by all accounts the staff will be happy to accommodate.

Mixed Sauces, free Not only can you choose the unlisted sauces for your Nandos meals, you can also mix and match. That means if you’re buying a whole chicken you can ask to get half of the chicken marinated with one sauce, and half with another. You can even ask them to mix two sauces together — apparently the Medium and Peri-Tamer is a popular combination. The Aussie Battler Burger, $2+ This ‘secret menu’ item is based on the knowledge that Hungry Jacks will happily add extra salads to your burger — including beetroot — for free. This means you can cobble together an inexpensive version of the premium ‘Aussie’ burger by buying a sausage omelette muffin and asking to add salad, beetroot and mayo — coming to $2 all up. You can also add bacon for an extra dollar, which will still end up setting you back less than half the cost of a regular Aussie burger. For more variations on this Hungry Jacks secret, check out our round-up here.

“Frings” Hungry Jack’s offers both French fries and onion rings on its sides menu. If you can’t decide, it’s apparently possible to order half-n-half in a regular fries box. You will be charged the higher amount for this combo, but variety is the spice of life, as they say.

For me, the definition of a secret menu means a name that you can take into a store, whisper surreptitiously into a cashier’s ear, and have them understand exactly what you want without asking for clarification. Testing this concept with Australian fast food restaurants didn’t work out so well. I didn’t find a single store that knew what any of the names I found on various ‘secret menu’ sites were meant to mean.

However, secret menu sites like #HackTheMenu usually list secret menu items with ‘some assembly required’, like our taste test of the bunless beef double at McDonalds. I’d take it more as a food hack than a secret menu — but that doesn’t mean you can’t still enjoy the slightly outrageous takeaway experience.

Would you try, or have you tried any of these ‘secret menu’ items? Let us know in the comments!