A Beginner’s Guide To TikTok

So, you keep hearing about TikTok and you’ve managed to avoid downloading it for months but you’re finally considering making the leap — where do you even start? We’ll give you a step-by-step guide to setting up your account and becoming the next viral sensation.

Everything You Need To Know About TikTok

TikTok is one of the world's most downloaded apps but millions of people would struggle to explain what it actually is. In similar fashion to musician Billie Eilish, who has millions of teen followers but far fewer outside of that age bracket, TikTok remains a bit of a mystery for anyone over the age of 18. Here are the main things you need to know.

First, you’ll need to download the app on your iPhone or Android device to get the ball rolling. Once that’s done, it’s time to sign up for an account, which you probably know the drill. Drop in your key details like preferred username, email address and birth date. Just remember you have to be at least 13 years old to sign up.

Once you’ve done that, you’ll be taken to the main feed where you’ll be able to see the trending videos based on your preferences.

Alternatively, you can opt to not create an account and browse endlessly until the days turn into night. You won’t be able to have the added functionality of uploading and interacting with videos but you’ll easily be able to see the trending feed without handing over any of your information. If you want to look at it from your laptop, it also has a desktop option.

The main tab you’re probably going to want to head to after you’ve set up your baby account is the home feed. It’s the tab on the far left and, similar to Instagram’s Explore tab, it offers you an endless scroll of the latest and most popular TikToks. 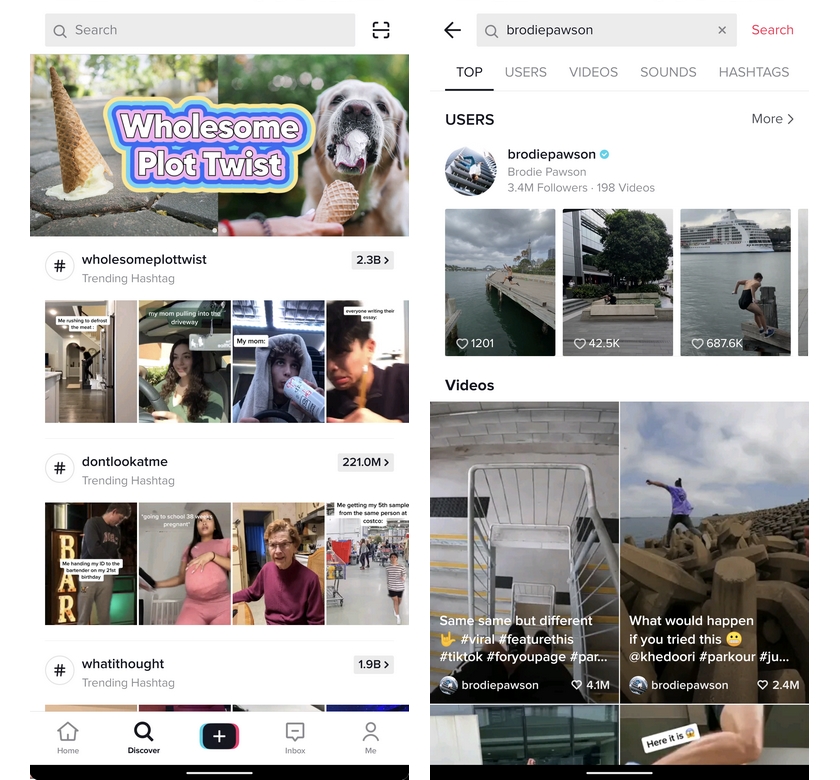 If you’re looking for something a little more targeted, the second tab over ‘Discover’, let’s you choose a number of popular hashtags that work as loosely-related categories. There you’ll see uploads of the latest viral challenges, memes or general callouts. In the search bar, you can also look out for your favourite creators or search for songs that the TikTok videos use.

How to upload your first TikTok

To debut your maiden TikTok, you’ll first need to make one. Tap the ‘+’ sign in the middle of the navigation bar to start your first video. Once it’s opened up, you can select music from library to set your song to. You’ll be able to select which portion of the track you want and once you record the video to it, you can adjust the balance of recorded sound with the selected music later after you capture the video.

There are a number of other editing options you can do before you post your video, including cropping as well as adding stickers and effects, but the sound and video are most important — that’s what makes a video unique.

We don’t actually know the steps you need to take in order to become TikTok famous but there are a few tips to help you get on your way. First, you need to be unique. Once you start watching videos on TikTok, you’ll start to notice the videos in the trending sections are usually the most creative. That means even though your video of you lip-syncing to Lizzo might feel like the best thing you’ve ever done, you’re probably gonna need to do something special to rise about the bulk of uploads.

Some other key tips include:

But perhaps the most important key of all is to keep your content consistent. It’s easy to feel disheartened if you only get a few views or comments but nobody starts off being a star immediately. After consistent and original content, you can slowly start to build up a following and eventually, the engagement should compound. Or if you just enjoy making content for the fun of it, do what you want and the rest can follow.

The app’s home feed algorithm hasn’t been without its controversies. In November 2019, a TikTok user was suspended after uploading a viral video criticising China’s treatment of Uyghur Muslims cleverly disguised as a makeup tutorial. TikTok later apologised only for her account to again be suspended.

A month later, it was revealed human moderators had marked videos from users with disabilities, facial disfigurements or tagged with ‘LGBTQIA+’ and kept them from the main feed in an effort to reduce bullying. TikTok has since confirmed to Gizmodo Australia the policy is no longer in place.

So if you’re planning to talk politics, instead of posting viral memes, then be mindful that TikTok’s got you in their sights.

How To Build Followers On TikTok

TikTok has fast-become one of the biggest online platforms for content creators looking to fast-track their online careers. Given its easy-to-use mechanic for sharing, creating, discovering via mobile devices, the platform has taken teenagers by storm and other age groups are slowly, but surely jumping on the bandwagon. We spoke to two Aussies who have found phenomenal success on the platform - professional body builder Kwame Duah and fitness influencer Helene Philippou. Between them, Duah and Philippou have an online following of more than three million people globally. Here are their tips for building and maintaining a following on the platform.