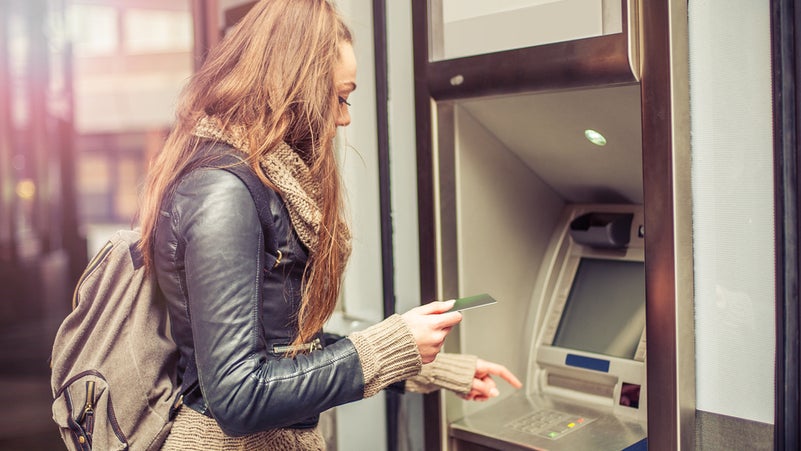 Imagine, if you will, Lifehacker staff writer Josh Ocampo standing outside a Tokyo 7-Eleven, clutching his gut while on waiting on hold with his bank. The chip on Josh’s debit card had stopped working mid-trip, which meant he couldn’t take cash out of an ATM. And the local clinic that could treat ”the worst case of food poisoning of my life,” as he recalled, didn’t take credit cards.

Josh got conned into telling me this story after he discovered this Reddit post about a user’s debit card that “flew off the back of the boat and into the water” during a Semester at Sea voyage. The student wouldn’t be back on U.S. soil for some time, with only short stays in port for the rest of the trip.

What’s an unfortunate traveller to do when your cash access goes missing?

Josh ended up using his credit card to withdraw money from ATMs as a cash advance. When he returned home, he was able to pay back those funds from his checking account so as not to incur any outrageous cash-advance interest fees. When his credit card started acting up at ATMs on his final day in Japan, another Lifehacker staffer spotted him the cash he needed until they got back to the states.

But not everyone is as lucky as Josh was. After all, he had his cards in hand, instead of at the bottom of the ocean like that very sad Redditor.

I asked Brandon Neth, credit card and award travel expert at FinanceBuzz, what he recommends for someone in this unfortunate situation. He said that while credit card issuers can typically ship a replacement card overnight if you’re in a jam, that’s not usually the case for a debit card, especially when you’re abroad.

Your best solution for a missing debit card might actually be in your hand right now: your phone. But it’s best to test this out before hitting the road.

“Debit cards can be added to some digital wallets,” he said. “Be sure to check with your bank issuer or mobile phone company before your trip. If it’s compatible, set up this feature and test to make sure it works so you have a backup plan while abroad.”

He also said you can try using a money transfer service like Western Union to get money sent to you. You might be able to log into your bank account to initiate a transfer to yourself, or have your bank’s customer service department help you arrange a transfer over the phone with you. “Although this isn’t the most cost-efficient way, and you’ll have to carry cash, it’ll certainly get you out of a pinch,” he said.

Fellow Reddit users recommended asking a friend to take money out of the ATM and transferring the amount to them via Venmo or other peer-to-peer service.

Whatever method you end up resorting to, make sure you report your lost card to your bank as soon as possible, even if you think it’s safe from fraudsters at the bottom of the sea.