Track Your Alcohol Consumption With This App

Depending on how 2019 went for you, you might be drinking a lot lately. My Limit is a free app that can help you monitor that consumption so you keep it within safe limits.

The app is designed to offer you a real-time estimate of your blood alcohol content so you know when it’s safe to drive. While I think it’s a good idea to monitor what your BAC level might be during a heavy night of drinking, I’ll go ahead and say that I think doing so for the sake of knowing when you’re officially not wasted enough to get behind the wheel is an absolutely horrible idea.

If you plan to go out drinking, also plan on taking an Uber/cab ride home afterward or have a friend who isn’t drinking at all designated to be your driver home. Period.

Just because you “feel OK” or your last drink was “hours ago” doesn’t make it a good idea. Different drinks take different amounts of time to “hit” all of us. Don’t start 2020 off making a rookie idiot move. If you’re worried about the price of a ride, calling an Uber right at midnight can typically get you a cheap fare (mine home last year was $9!), and if you wait an hour after the ball drops, the price will also drop. If that’s still a deal-breaker, then plan to stay at your friend’s house or simply opt for mocktails all night.

Now that’s out of the way – What My Limit can be great for is helping you remember to pace yourself. Sure, you can typically drink 4 beers when you’re out with friends, but new year parties mean you’re probably also going to have a glass of champagne, and maybe a shot or a cocktail or two will make their way in there as well along with those beers. All that to say, you’re probably not drinking how you normally do, so you’re not going to be able to pace yourself like you normally do either.

When you first launch My Limit you’re prompted to enter your body weight and gender, which is what the app uses to guesstimate how alcohol is going to impact you. While you’re drinking, an “add a Drink” button allows you to quickly tally what you consumed using pre-set buttons.

Beers, for instance, allow you to choose between Light, Regular, and Craft with ABVs ranging from 4.2% to 8%. Obviously there are beers with ABVs lower than 4% and higher than 8%, so you’re just going to have to do your best here.

Liquor is added by ounces you consumed and proof, and wine is added by type, although it too makes some sweeping generalisations about what the BAC might be of that wine.

All that to say, this is not going to be a perfect spot-on analysis of your current ABV. That’s even more of a reason to not use it to determine when you’re good to drive, because it definitely won’t be correct.

What it will do is give you a decent estimate of where you are blood alcohol wise and let you know when you should probably pump the brakes.

For instance, I told the app I had 240mL of champagne and a shot of 80-proof liquor, and it immediately put me in an orange zone, told me my reactions are impaired, and that it will be 4 hours and 18 minutes before I’ll likely be fully sober. If I actually had just downed those two drinks I might opt to switch to water before grabbing another beer, even though they haven’t actually hit me yet. In all likelihood that would be setting me up for some regrets in around 30 minutes. 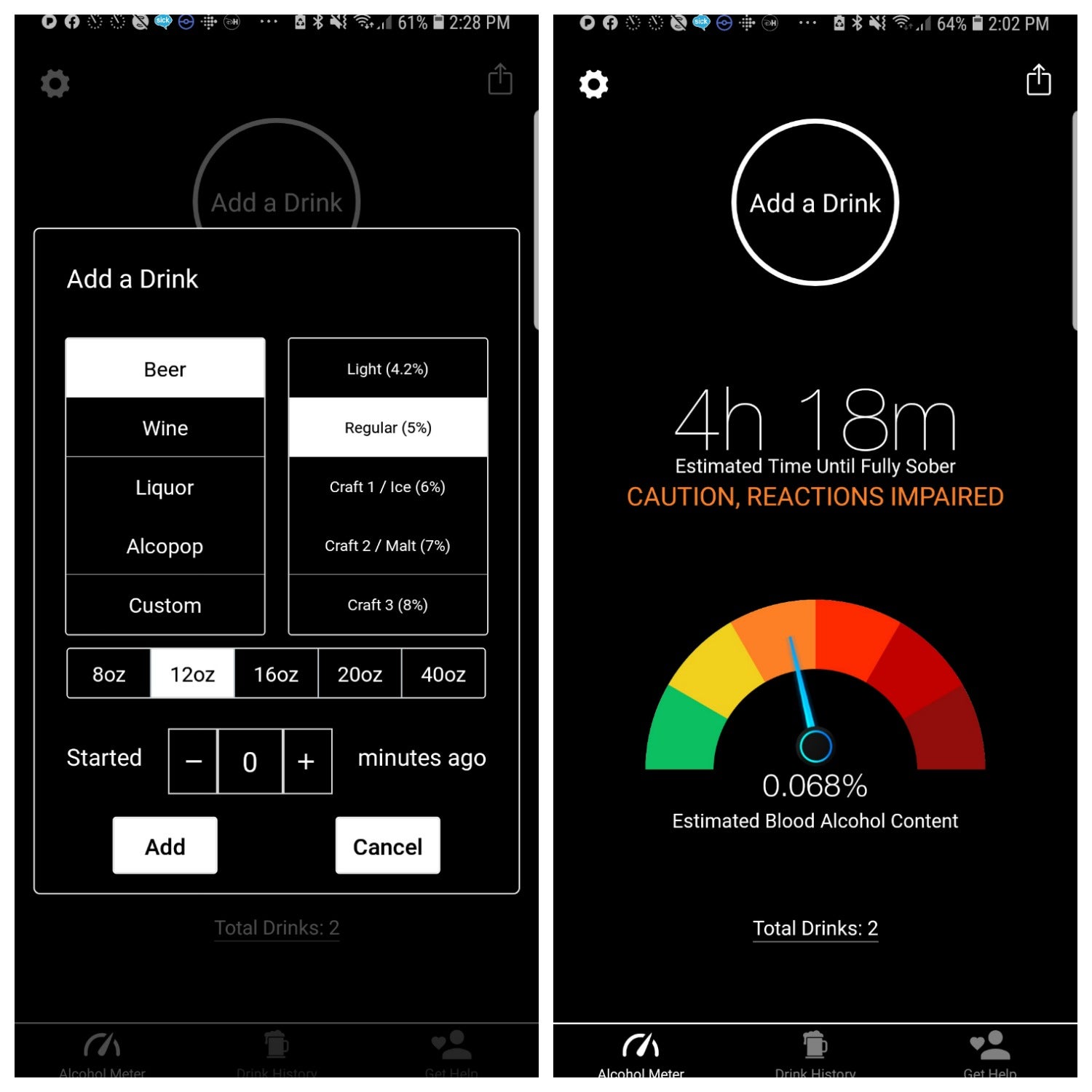 Where I think the app will really shine is if you use it throughout the year. A “Drink History” section can track your consumption over a day, week, month, or the entire year so you can see how much you’ve really consumed.

You know how we all tell our doctor we only have 2 drinks a week? This way you’ll actually know the correct answer. Maybe it is 2 drinks, but maybe it actually averages out to more like 5 or 6.

If you’re looking to cut down on your drinking in 2020 it could potentially be a great tool to help get you there, and even if you’re not, it can be a great way to pay attention to how much alcohol you’re consuming during an evening with friends or across a month to notice any trends before they might become an issue.