New televisions at the CES gadget show in Las Vegas were more diverse this year than they have been in a long time. Beyond the 8K resolution hoopla, panel technologies ranged from MiniLED and MicroLED to souped up OLEDs, making things much more interesting than usual.

Now chances are you won’t be buying the following TVs at launch – the price tags are too high for the average consumer – but by the time 2021 rolls around, these are the TVs to keep a close eye on.

So which ones stood out from the crowd? Here’s four of my favourites. 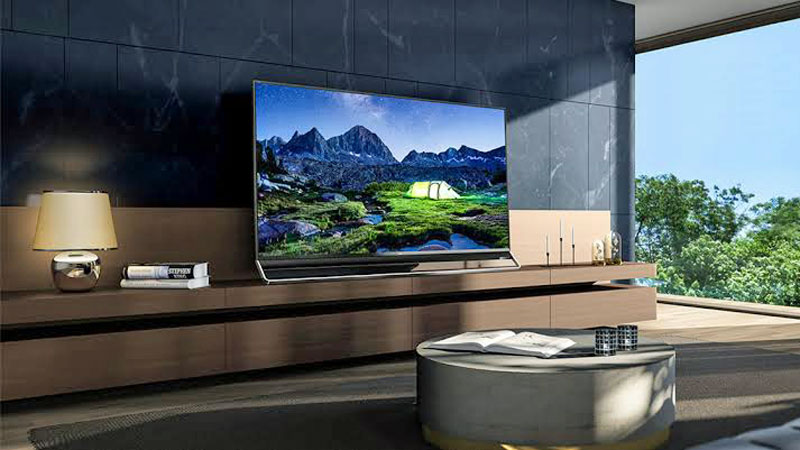 Hisense first showed off its intriguing Dual Cell 4K LCD TV at last year’s show, but the Chinese company was back at CES 2020, and promising to release the TV in Australia this year. So why is Dual Cell a big deal?

Conventional LCD televisions use an LED backlight that selectively dims part of the image to achieve better contrast between light and dark areas. This is why an LCD television with more local dimming zones almost always looks better when it comes to viewing HDR content. The best and most expensive LCD televisions on the market normally top out at a couple of hundred dimming zones, as there’s only so many LEDs you can fit on a single backlight.

Hisense gets around this issue by precision bonding a second monochrome LCD layer to the main colour LCD layer to more precisely control light output, enabling a jaw dropping two million local dimming zones and single-handedly outclassing every other LCD display when it comes to contrast. While the black levels and viewing angles can’t quite match OLED levels, it has the advantage of being able to go brighter and Hisense claims that it is cheaper to manufacturer. Hisense wasn’t yet ready to reveal pricing on the 65-inch model, but the TV will be called the ‘SQX’ when it lands on our shores this year.

In a similar vein, Chinese company TCL is preparing to release its Vidrian X10 TV in Australia this year, which achieves greater dimming zones by shrinking individual LEDs with a panel technology called MiniLED. This will be the first MiniLED TV in Australia and the company claims it’s also brighter than any TV on the market, with a peak brightness rating of 2000 nits backed by a whopping 5184 local dimming zones. The 75-inch 4K model will go for $8999. 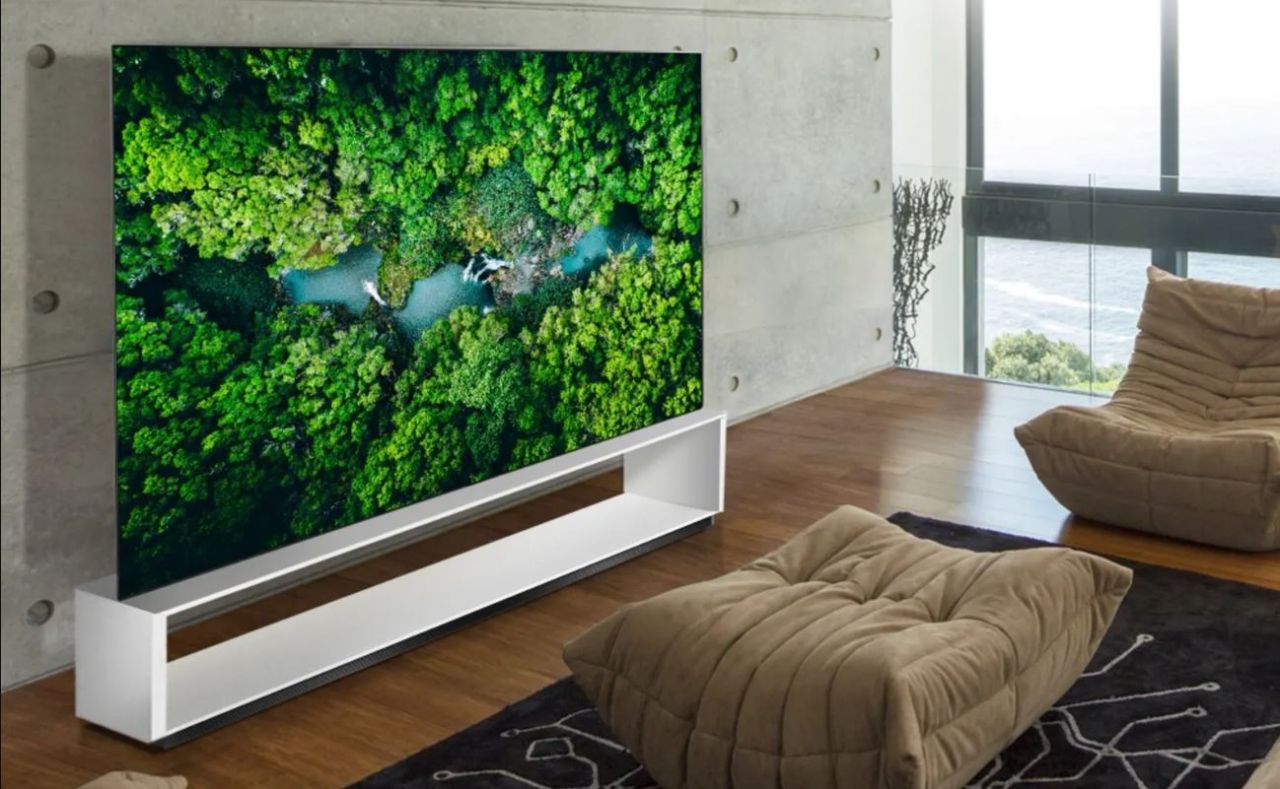 I’ve been mostly unimpressed with 8K televisions; that was until I locked eyes with LG’s 88-inch 8K OLED. When you combine the clarity of 8K resolution with the infinite contrast levels that only an OLED can provide, it starts to feel like you’re looking through a window as opposed to a television screen.

I was also surprised at how good 8K YouTube content looked. Clearly LG’s tech under the hood was working overtime to clean up the rough edges and artificating that would otherwise be apparent with streaming.

It’s also worth mentioning that Sony, who also use LG’s OLED panels, will be following with both 88-inch and 77-inch 8K OLEDs this year.

Yes it is going to be expensive, and yes there’s next to no 8K content available, but that doesn’t take away from the fact that this is one of the most impressive looking televisions at the show.

Sero: a rotating TV for the social media generation 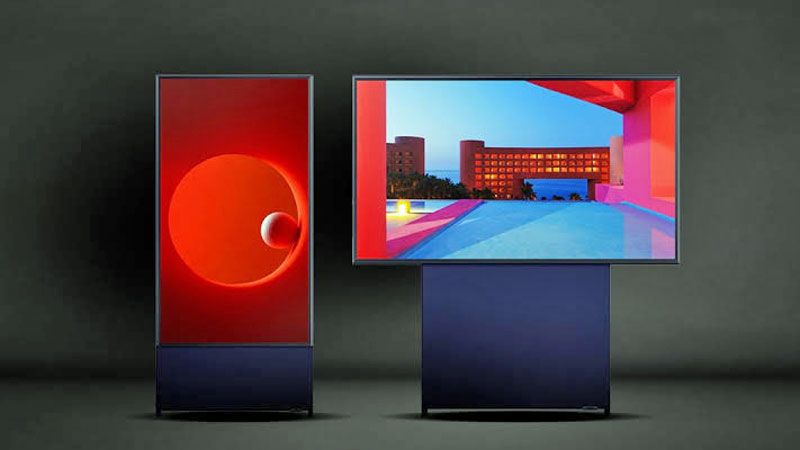 File this under ‘crazy but interesting’; the Sero from Samsung is essentially a 47-inch 4K display that connects to your phone and rotates automatically to match the orientation of your screen. Labelled as the TV for Generation Z (in other words blame the millennials) or for anyone who spends a lot of time watching portrait videos on Instagram, Facebook, TikTok and other social media sites.

In its vertical orientation, which is the default setting for this TV, the Sero basically looks like an oversized smartphone mounted to a plastic easel. The screen and motorised stand are inseparable so no wall mounting or traditional stand required. The stand is on wheels so it can be carted about throughout the home and will mirror Android smartphones as well as iPhones via Apple’s AirPlay 2. 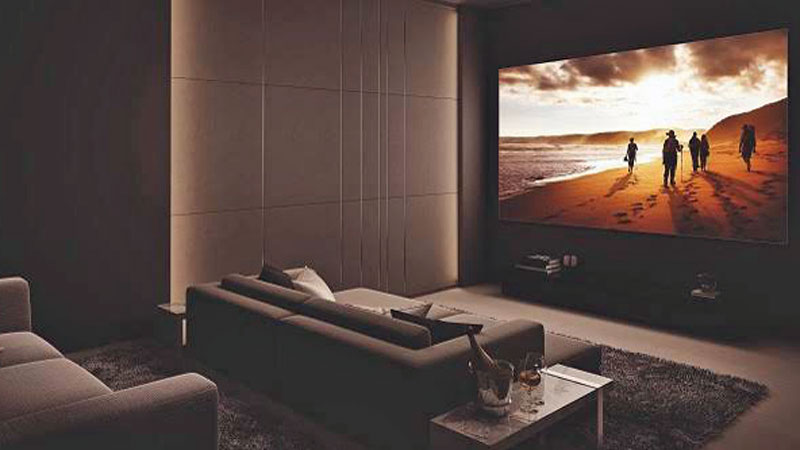 Every TV manufacturer needs a showpiece to attract eyeballs at the show, but Samsung took things to a whole new level with a 292-inch (7.4-metre) 8K MicroLED display aptly titled ‘The Wall’. MicroLED might’ve been nothing more than a tech buzzword a few years ago, but it stands poised to be the next big thing in TVs.

MicroLED boasts the perfect black levels, excellent colour and near perfect off-angle viewing of OLED but can go much brighter and without the possibility of burn-in. Plus due to their modular nature, MicroLED panels can be combined into larger displays so there’s no limit to screen size or shape either.

The 292-inch version on the show floor is made up of multiple panels in an 8×8 configuration. While you can make out the seams of the individual panels when looking right up close, it isn’t apparent when viewing it at a normal viewing distance.

Samsung says that in 2020 it has enabled large scale production of MicroLED panels in fixed screen sizes, starting from 88-inches to all the way up to 150-inches, with the plan to sell modular versions to commercial customers.

There’s no doubt that MicroLED will one day become the default technology for televisions and its scalable size means that it could replace the need for projectors entirely. The question is how long will it take before the technology hits a price point that consumers can actually afford? Given the 292-inch monster is currently being sold to commercial customers for a cool $US1.5 million dollars ($2.17 million), a minimum of five years would be a fair bet.

The author travelled to Las Vegas as a guest of LG.