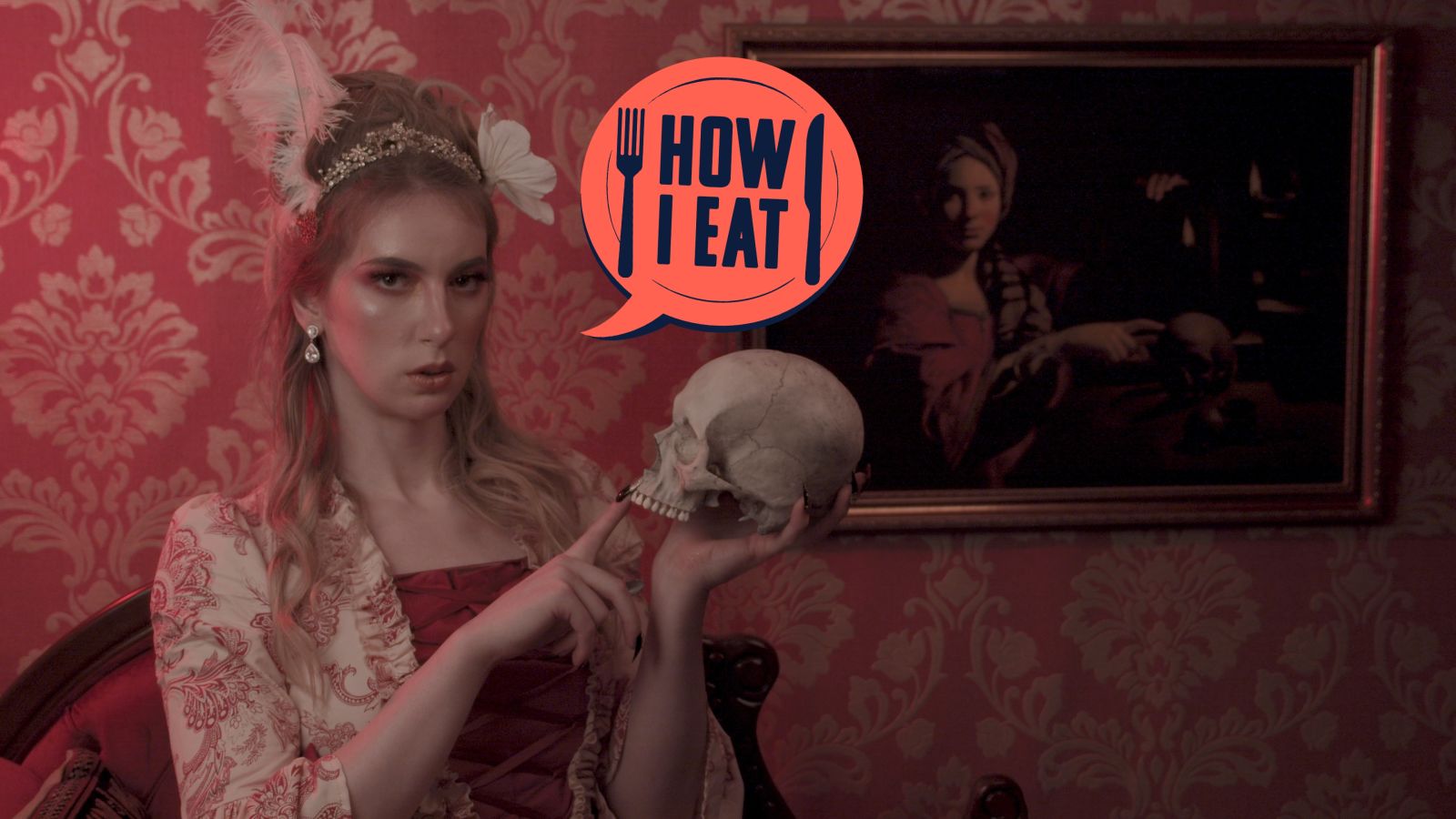 My favourite part of of interviewing people for How I Eat is bullying them into showing me the inside of their fridge, but my second favourite part is getting delicious advice on how to eat, drink, and live. Choosing my favourite excerpts from each interview was quite a challenge and—though I think I chose well—you should definitely read every interview in its entirety (trust me, it will help you start the new year out right). 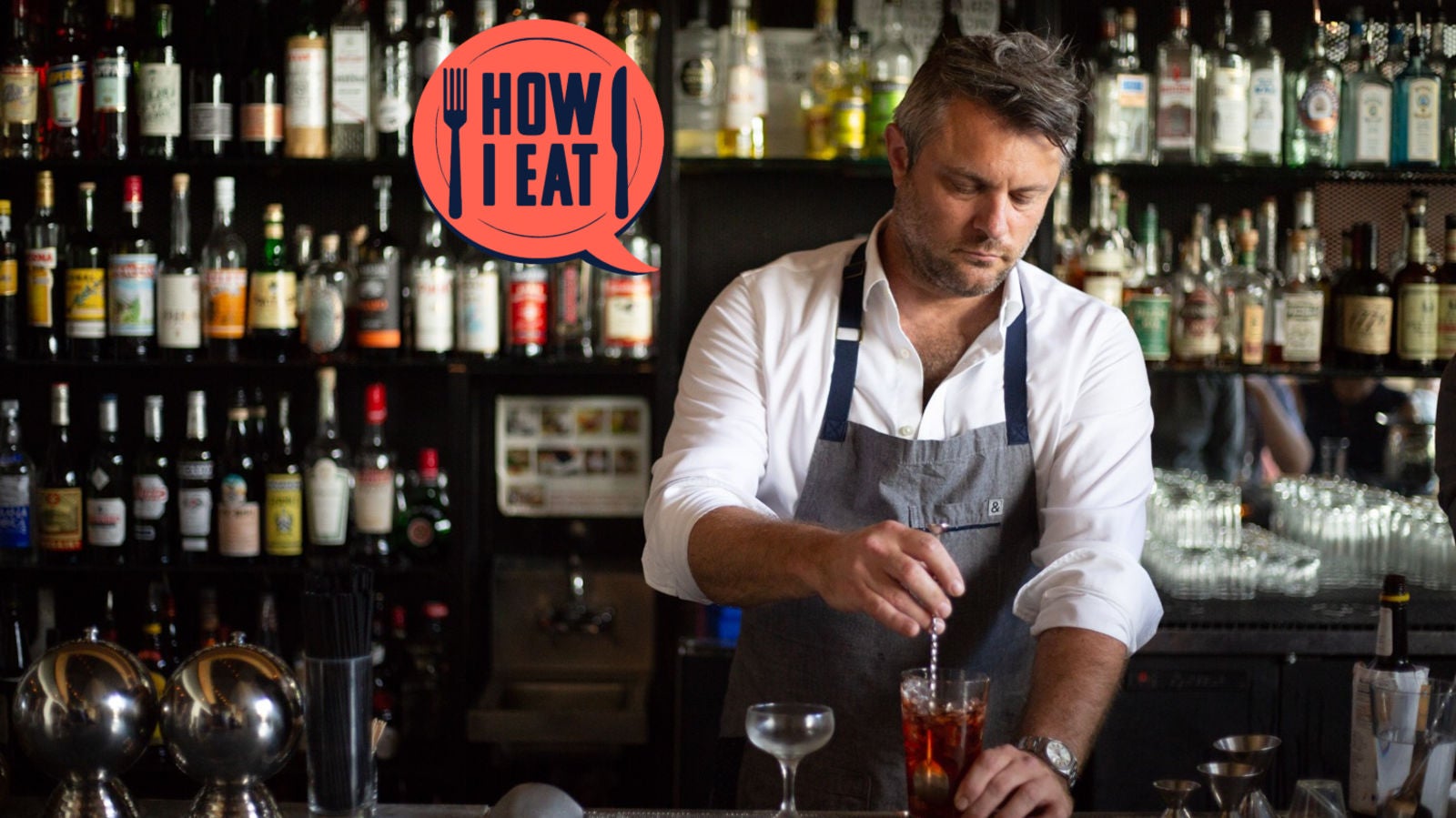 I think that everybody should have their drink that they know how to make really well, just like everybody should have their dish that they know how to make really well. People that don’t know how to cook, or [don’t] have a dish that they enjoy making, kind of make me sad. And the same thing with a drink; you should have your go-to, whatever it is. It doesn’t matter to me. But if your thing is like that you really love martinis, you should be able to execute a really great martini at home. Because it’s cool and it’s social, and it’s fun to do alone and it’s fun to do with other people. So have your thing, but I think a lot of people get—and I always try to talk people out of this—but people think that in order to have a home bar, you have to have every single brand or type of booze. You know people say “What should I get from my home bar?” and I say, “Well, what do you like?” If you don’t like tequila, I’m not going to tell you to get four different types of tequila for your home bar so you can make a bunch of tequila drinks you’re never gonna drink. If you just like vodka, then get six vodkas.

Stella Parks on the disparity of flours: 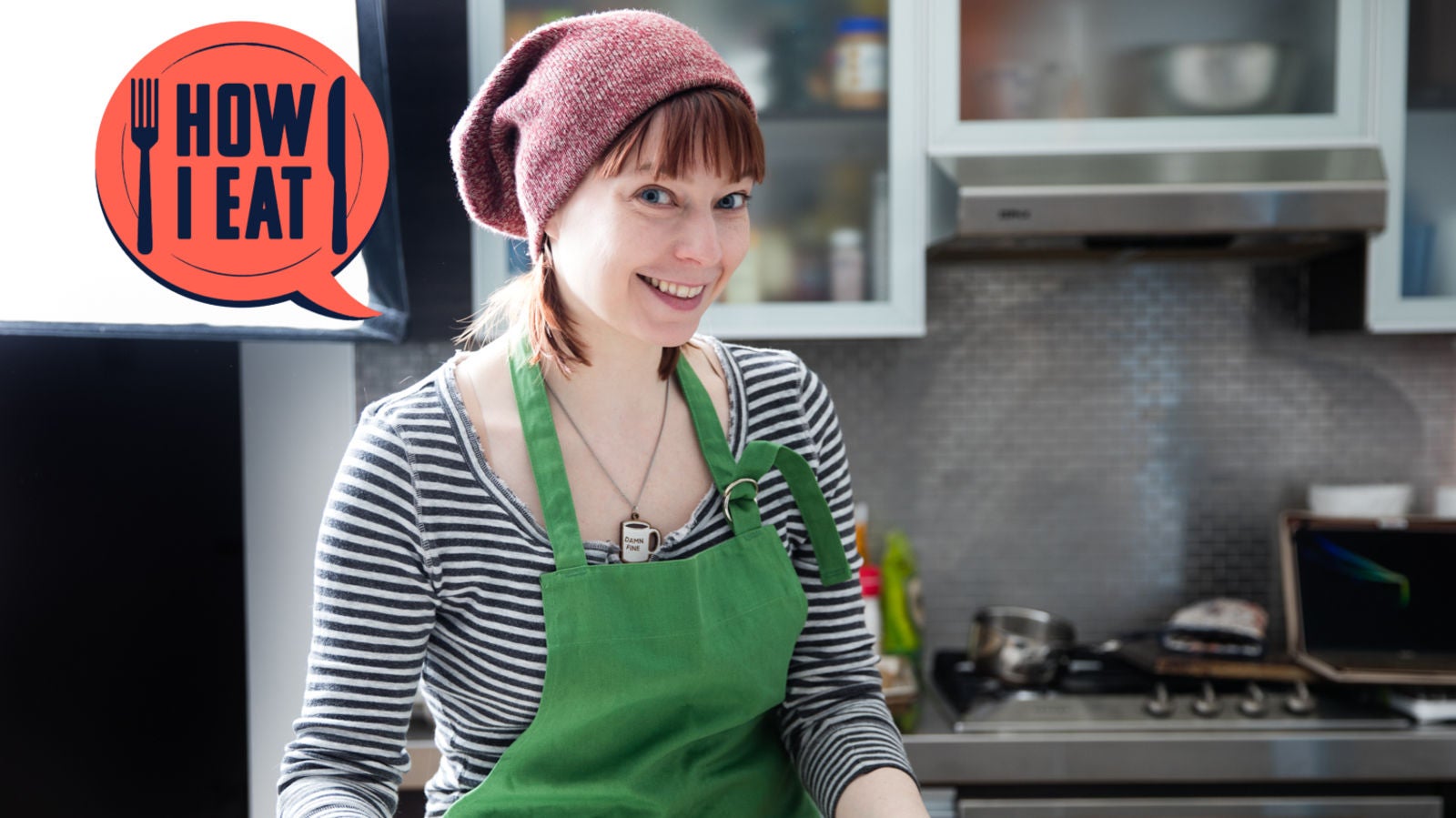 The one thing I wish everybody could understand is that not all all-purpose flours are the same. This is not a regulated term. There are some all-purpose flours that are made with 100 per cent soft white wheat flour that is chlorinated, which has a completely different behaviour than other brands, which might be made from 100 per cent hard red wheat flour that’s completely untreated. And then there are flours that are a blend of white and red wheat, and they’re all over the map. Some are high in protein, and some are high in starch, and vice versa.

So I always try and specify in my recipes what kind of flour I’m using. And I think some people get a little salty. They’re like “well if you’re making a recipe that only works with one type of flour, you’re not a very good baker.” Well actually, all bakers are making a recipe that only works with one type of flour, unless that baker is also cross-testing their recipe across multiple brands of flour—honestly I don’t think most recipe developers are investing that kind of time. So the best any baker can do is find a brand that they like and stick with it, and let you know what brand that is, as a courtesy. People don’t understand that, and they’re just like “Well I made it with this flour and it doesn’t work. This recipe’s bad.” Well, that flour has comparatively a lot less starch, or has a lot more protein, or is much starchier, and that’s going to affect everything. So if you have consistent problems with their cookies not spreading enough, or their cake having too coarse—or kind of a corn bread-like structure—try a different flour. 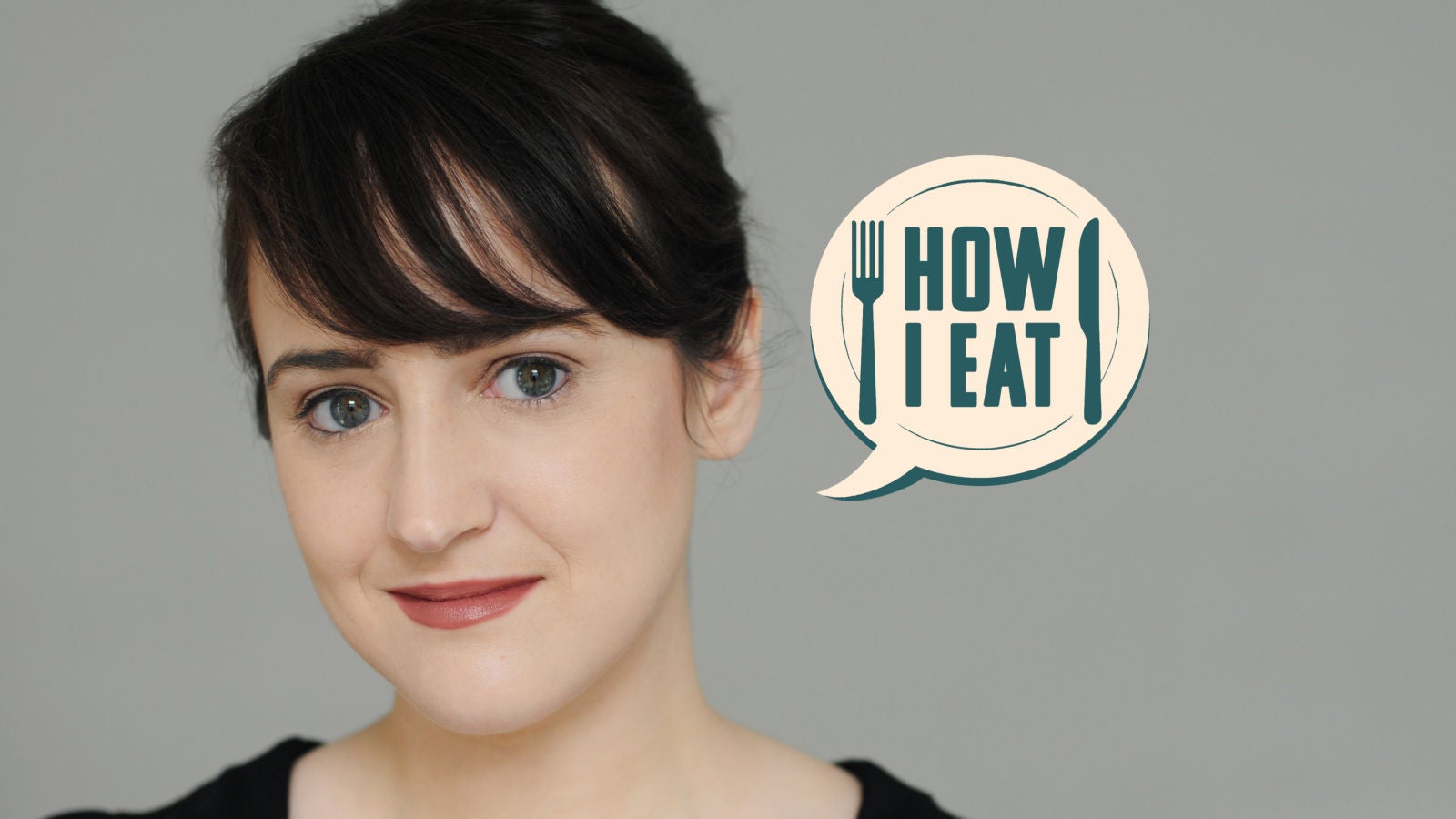 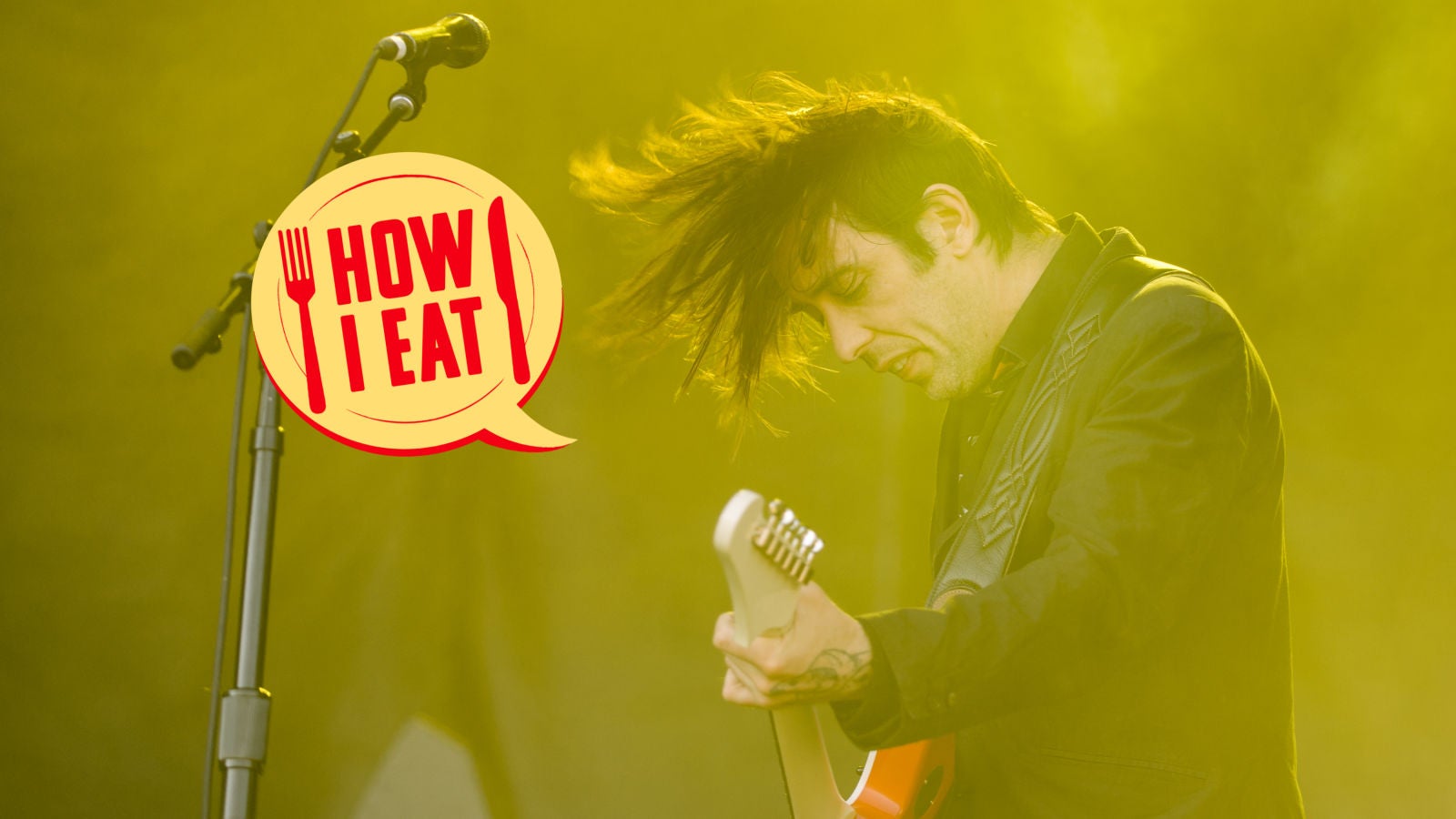 I started making this one-pot Japanese breakfast. You get a can of mackerel, you get some rice—generally sushi-grade rice—and you make the whole thing in a rice cooker. So you put umeboshi, a pickled plum, into the rice cooker, with the rice, mirin, a little bit sake, a little bit of soy sauce, kind of half an inch of chopped up ginger, and the oil from the mackerel can, because mackerel is a super fatty fish. You want to get the mackerel packed in—soy oil works pretty good—and you dump the mackerel in, then you top the water up to the liquid level, and put the lid on. Cook it. The oil keeps it from sticking at the bottom of the rice cooker, but as it cooks it forms almost a crust like if you were making really, really good fried rice. And when it’s done you fluff it up, put it in a bowl, then I put Japanese pickles on it, like Japanese pickled beef steak plant. I forget the Japanese name for it but they’re sort of like purple-y pickles, and then Japanese pickled cucumber. Put really finely sliced green onion on the top. And then you eat it, and it’s great. It’s a good breakfast because it’s protein, and there’s a lot of fat in mackerel, but it’s not overly heavy, you know? And it’s a single pot.

So, I realise I am again entering into very controversial territory, but Hawaiian pizza is good, actually. I especially love Hawaiian with jalapeños because of my spicy thing. So you have ham, pineapple, jalapeños— amazing. It’s objectively correct. Especially with a cured meat, like ham. The sweet and the saltiness—it’s good. It’s like wrapping slices of prosciutto around honeydew melon. I love that as a snack. The salty-sweet-savoury combination. Oh! It’s so good. 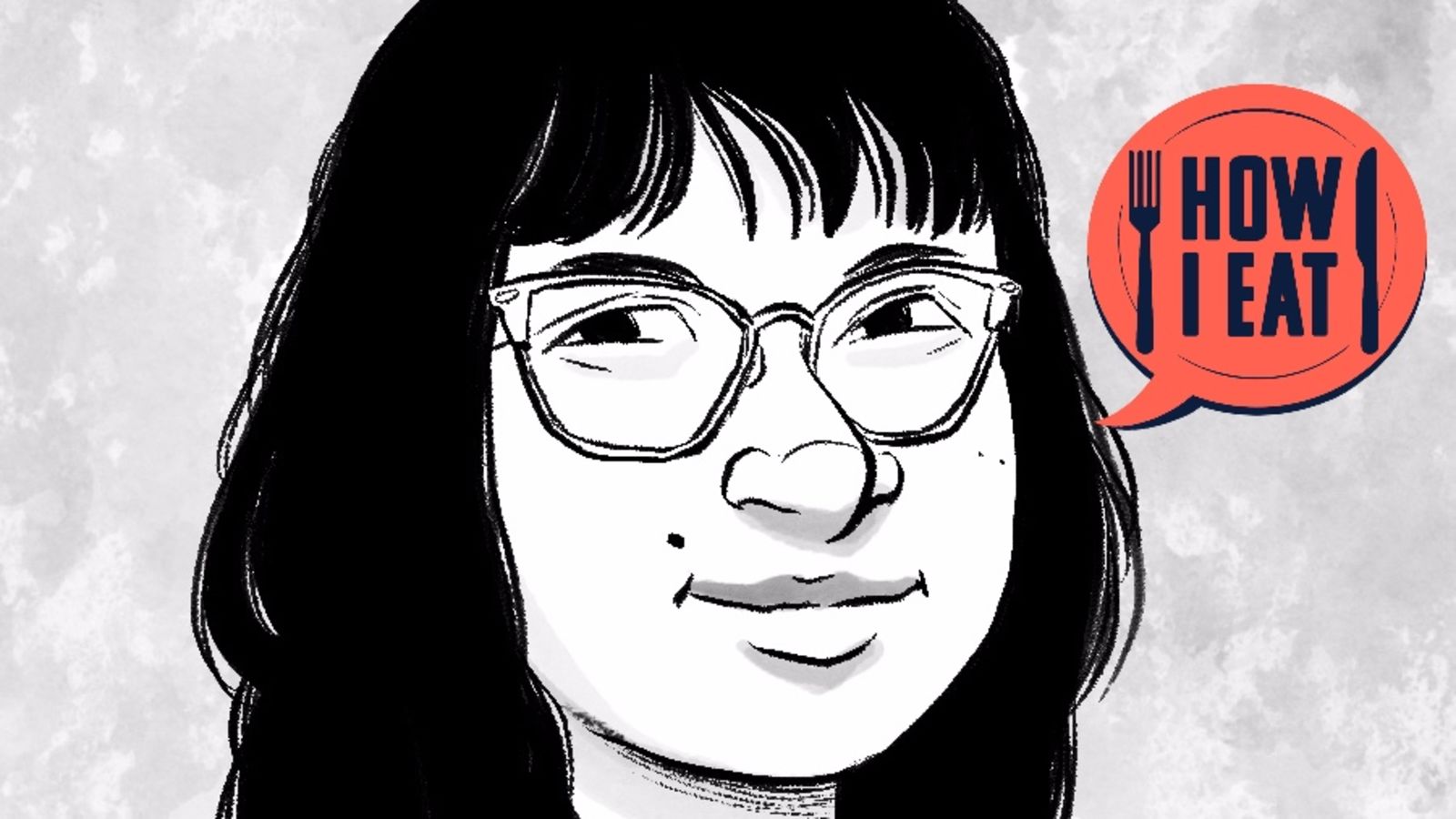 So my favourite potato chip is the Sweet Maui Onion chip—you know the Hawaiian ones? I’ll throw those into a sandwich. Of course pickles add a really delicious sort of texture. I hate putting lettuces in sandwiches because of how limited their abilities are as far as adding anything of substance. Actually when I was a kid—I can trace this to that—I was in middle school and I remember taking my lunch money and, rather than buying a hot lunch or anything of substance, I would buy a bagel, which came with margarine and a bag of Doritos and I would just sandwich the Doritos between the slices of bagel and eat that as a sandwich. That was just amazing to me.

I’m still on the quest to find the perfect breakfast sandwich in San Francisco… A round bun, first of all—the closer it is to a kaiser roll the better—eggs that haven’t been microwaved, and good textural contrast. That might mean crispy bacon or, if I’m very lucky, that means a hash brown like the kind they sell in the freezer—those oval things. If that’s in the sandwich? Game over. 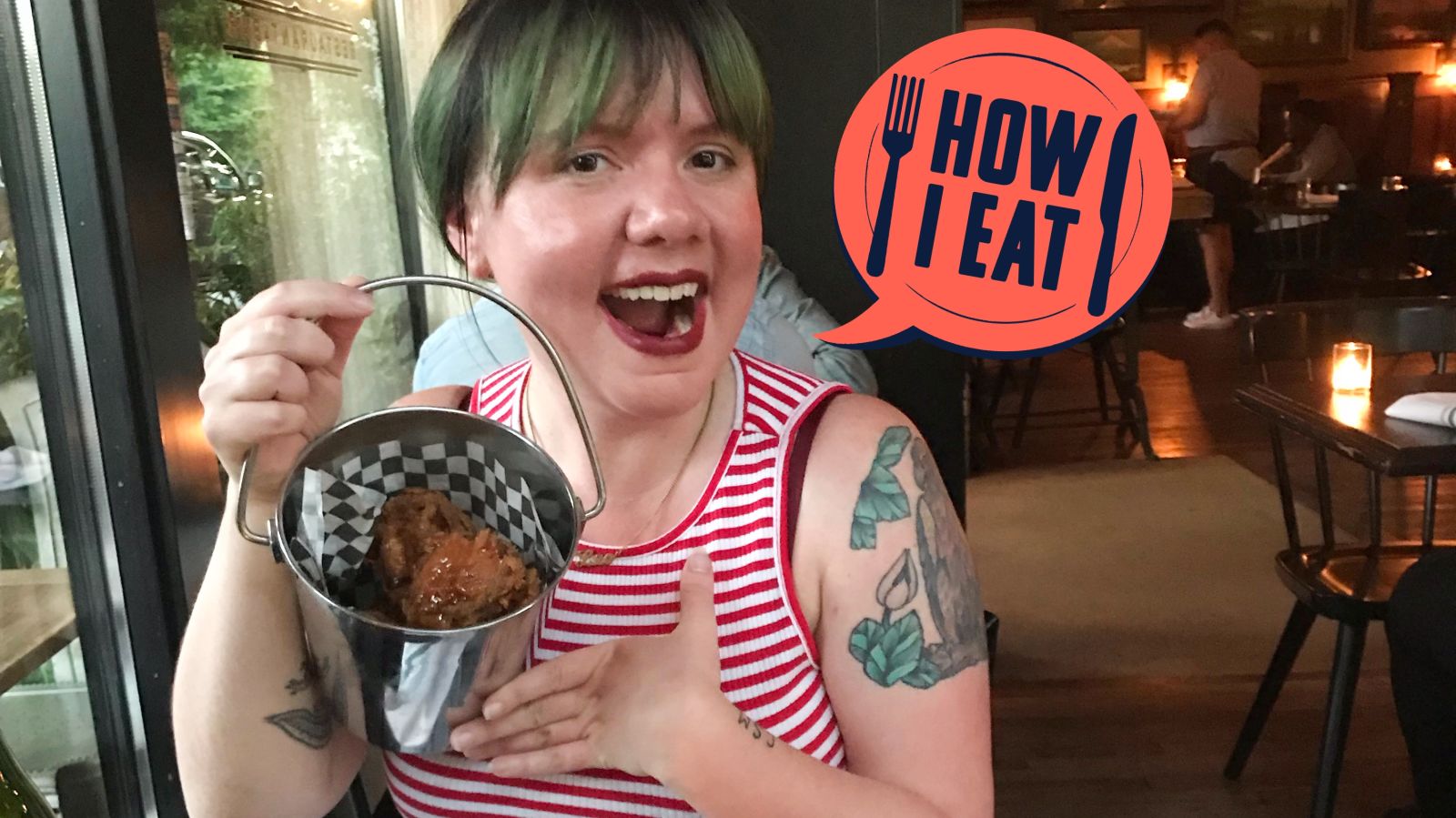 My favourite baked good is a brownie from a boxed mix. I love those because they cost three fucking dollars, and they come together real quick. I’ll use pistachio oil instead of vegetable oil, and that will make it a little nuttier. And sometimes I’ll use coffee instead of water too. And a box mix always has—the Ghirardelli one—it always has a perfect shiny crust. It’s chewy on the edges. It’s fudgy in the centre. They’re perfect. I don’t see a reason to spend any time measuring anything. I hate baking. I used to be a baker but it reminds me too much of my time in chemistry, with all the weighing and precision, and I just refuse to be part of that anymore. I opted out of that.