As you can expect, there’s lots of strange bullshit trending on Twitter at the moment: World War Six, for example, the coronavirus, all kinds of miserable bullshit. There’s also another Tweet that’s generating an awful lot of likes—maybe not quite the scale of the global disaster ones, but still—and it brings up a question a child might ask, but not a childish question: was noted fictional hyper-intelligent mouse Stuart Little’s car a toy car, or a “real car that has simply been made to be very small.” This question can get heated, but, luckily, I think I have the answer.

Here’s the tweet in question, from Twitter twittler Soul Nate, relaying what I choose to believe is an entirely truthful exchange that definitely happened in reality:

guy at bar: *up in my face* what the fuck did you just say to me

me: i said “stuart little doesn’t drive a toy car, it is a real car that has simply been made to be very small”

As with nearly every conversation about Stuart Little, this one ends with being menaced with the cruel, jagged end of a broken bottle. And, really, that makes sense, because E.B. White’s famous book about a mouse is deeply weird.

But look, we’re not here to get bogged down in the details of how Stuart’s human mother somehow gave birth to a human-brained(?) child with the body of a mouse, we’re here to talk about Stuart’s car. 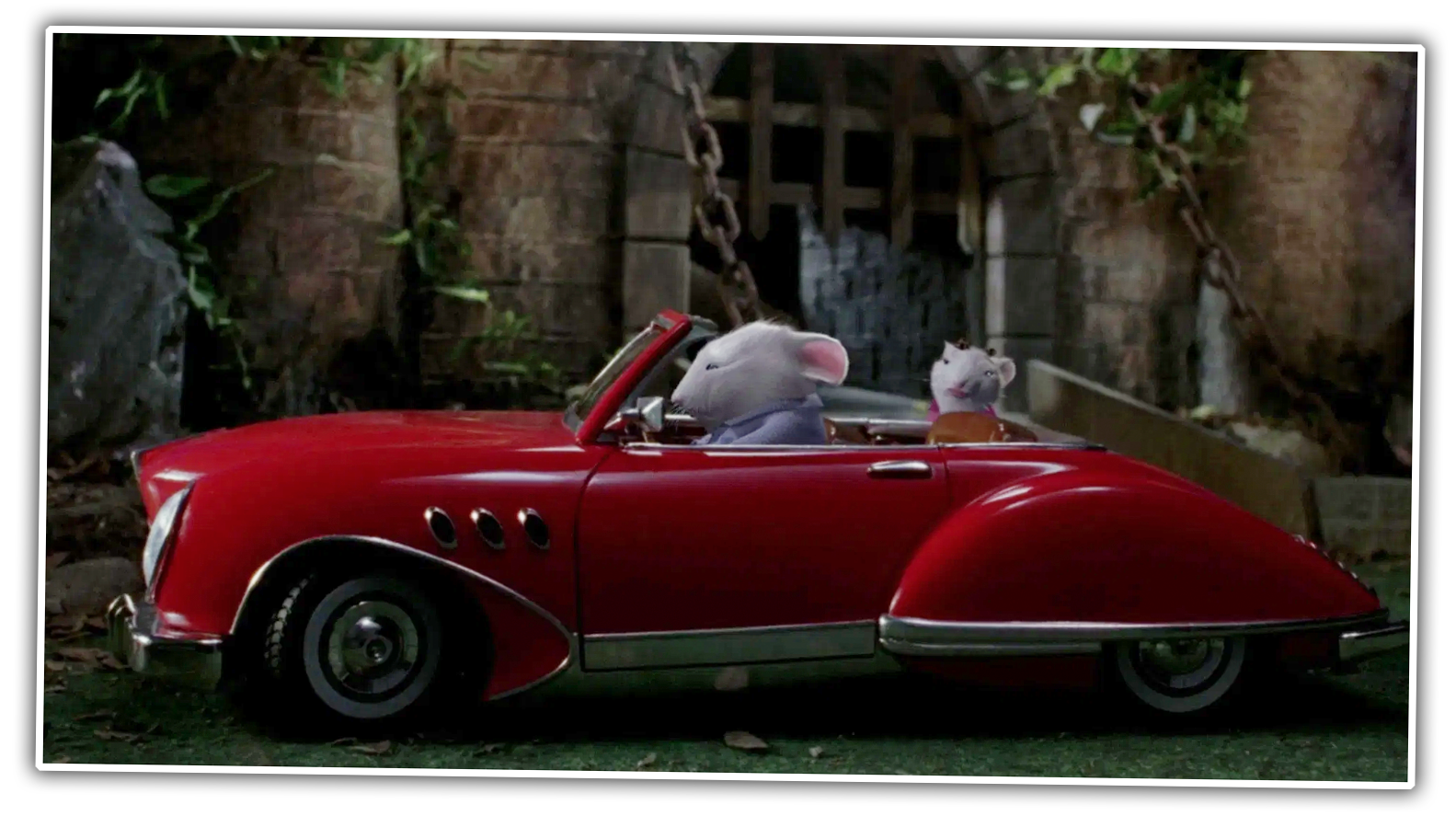 Now, in the movies, the car is always shown as a red roadster, vaguely mid-’50s Buick or possibly Italian looking and quite sleek. In the book’s original illustrations, though, the car looked like this:

It kind of reminds me of a 1930s Voisin, a bit. The details shown are important here, too: it’s got twin side pipes (assuming there are two on the other side as well, was it a V4?), an external emergency brake, and a protruding fuel filler neck at the rear.

In the book, the car is actually owned by a dentist, Dr. Carey. Here’s how the car is described in the original text:

The Doctor then led Stuart into another room. From a shelf he took a tiny automobile, about six inches long—the most perfect miniature automobile Stuart had ever seen. It was bright yellow with black fenders, a streamlined car of graceful design. “I made this myself,” Dr. Carey said. “I enjoy building model cars and boats and other things when I am not extracting teeth. This car has a real gasoline motor in it. It has quite a good deal of power—do you think you can handle it, Stuart?”

I feel like right here, right from the source text, we have our answer. This passage, I believe, proves our pal Soul Nate correct, and the person threatening him with the broken bottle quite wrong.

What’s being described is not a toy car at all; it is, in fact, a fully-functioning automobile, painstakingly built in miniature. It runs on gasoline with an internal combustion engine, and later in the book we find details describing how the radiator actually has coolant in it, the tires are pneumatic, and it’s entirely drivable by a mouse-sized being. That’s not a toy.

If it was a toy, there’d be no need to build it so much like an actual, workable car. At best it may have a wind-up motor or a small electric motor driven off some AA batteries, neither of which would provide any real useful range for driving like a tiny gasoline engine would.

Dr.Carey describes the car as having “a good deal of power,” as well, which I think is entirely possible. For example, look at the sort of internal-combustion engines you can buy for model aircraft:

That tiny little 6.5cc four-stroke engine weighs just over 10 ounces and makes an incredible 0.65 horsepower. For a car the size of a shoe, that’s a staggering amount of power, and if we assume that Dr.Carey’s car has an engine even remotely comparable to this, Stuart could tear arse all over New York in that thing, which makes it an actual, viable vehicle and definitely not a toy.

Of course, the book being weirder than you remember means that while I do not think Stuart’s car was a toy, it was described as having at least one extremely implausible and absurd feature:

“Because this automobile is a thoroughly modern car. It’s not only noiseless, it’s invisible. Nobody can see it.” “I can see it,” remarked Stuart. “Push that little button!” said the Doctor, pointing to a button on the instrument panel. Stuart pushed the button. Instantly the car vanished from sight.

It had an invisibility button? What the hell, E.B.? A dentist, with his clever, capable hands and familiarity with precision tools, is entirely believable as someone who could build a functional, miniature car.

But that dentist also developing a system that could bend the laws of physics to render a physical object invisible? Come on. Why do you have to push it so far?

It’s not like the invisibility proves useful; Stuart turns it on and then accidentally hits the starter, sending the car zooming around the room invisibly, smashing into shit and ending up a right mess: 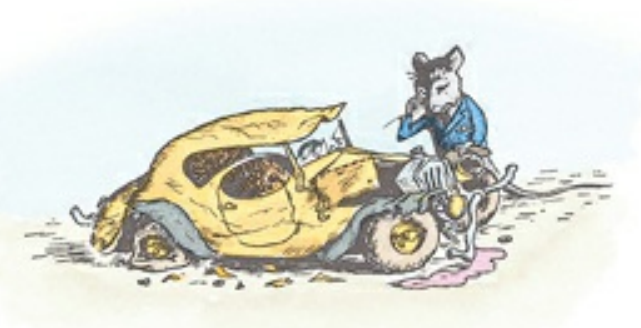 Way to go, dumbass. Though, to be fair, it was the wreck that revealed the car had pneumatic tires and radiator coolant. 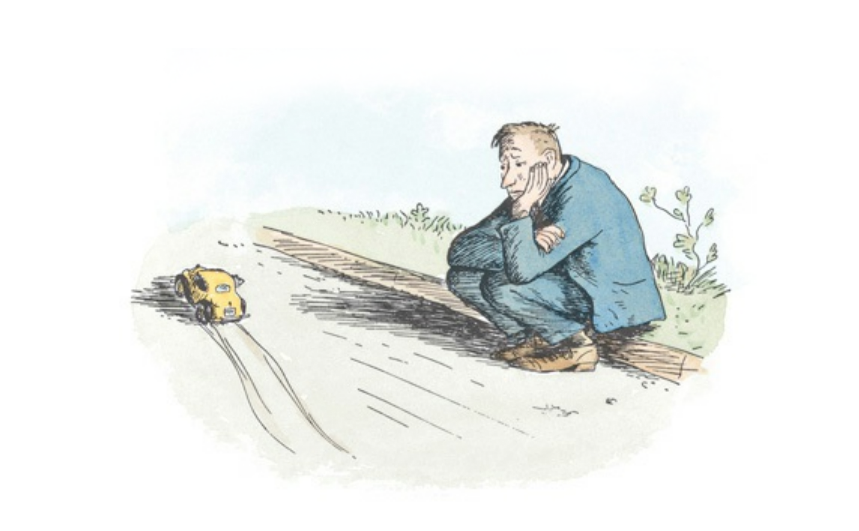 Even after the car is repaired, Stuart hardly ever seems to use the invisibility feature, anyway. 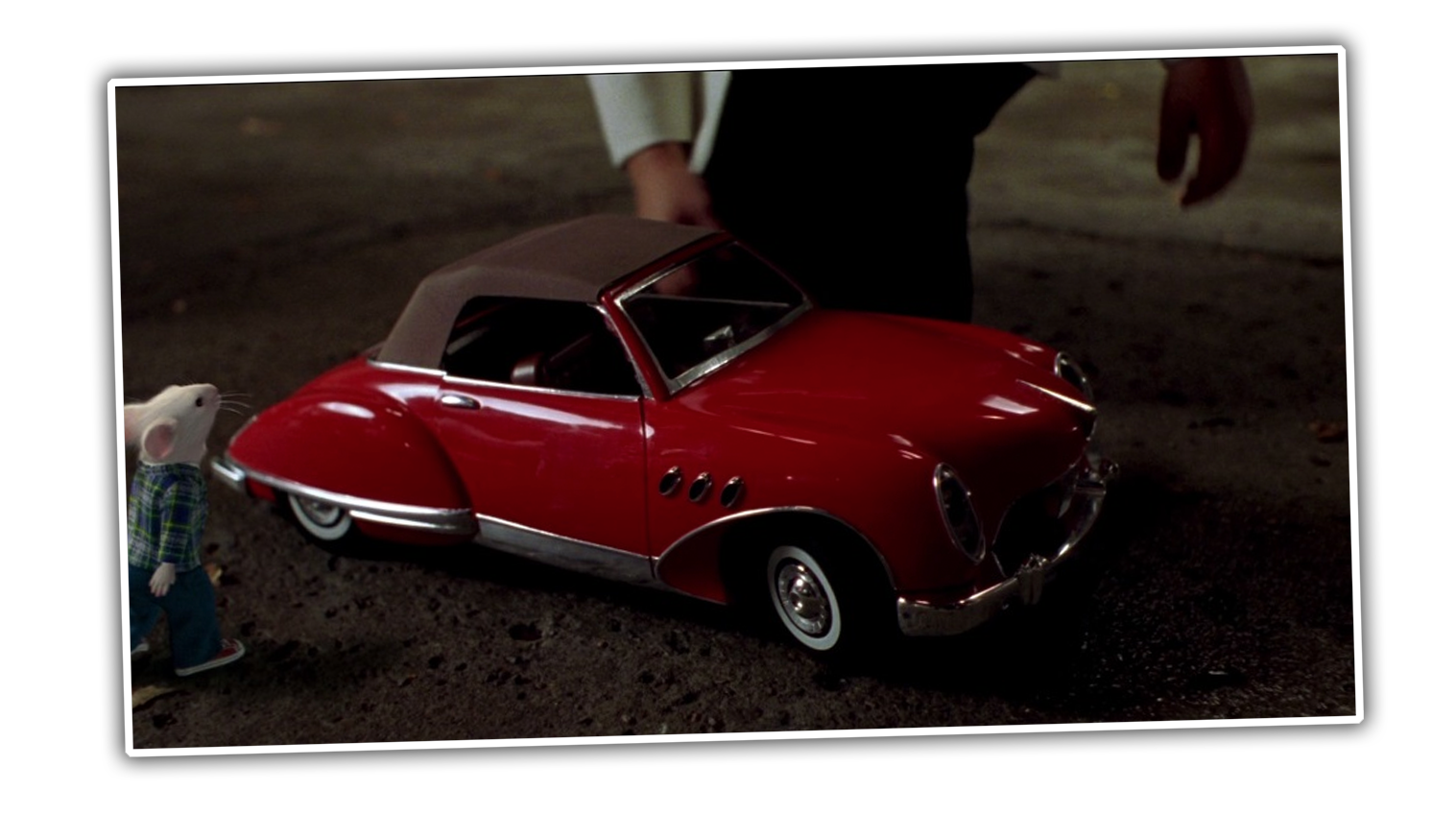 Even if we look at the movie car, which is quite different and does initially appear to be much more toy-like, with a plastic body and possibly an electric drivetrain (neither of which are disqualifiers from real-car-hood), I maintain that the manner in which the car is used is far more consistent with the idea it’s an actual car in miniature rather than a toy.

First, the car can be driven from the inside. That means it has a functional steering wheel and pedals that control acceleration and braking, at minimum; if it were just a toy, why would it have such things, especially working pedals? Unless you were scaled as small as Stuart, no kid could really use those pedals. 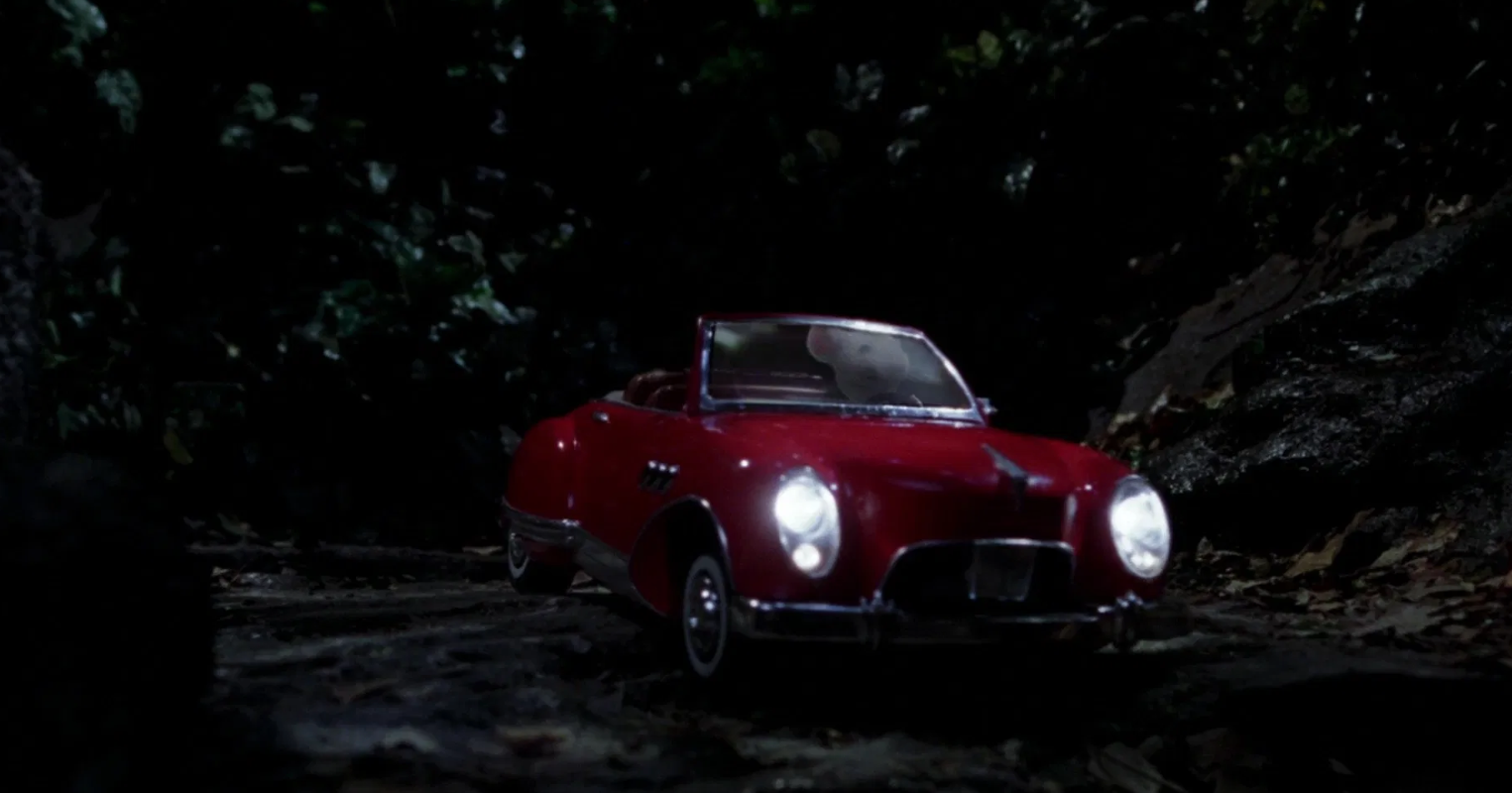 Plus, the distances driven in the car are far beyond what a mere toy would be capable of. Perhaps there’s some semantic arguing one could do regarding the differences between a toy and model and miniaturized machine, but I think if it’s capable of being operated like a car, that is, driven from the inside and capable of covering useful distances, then it’s just a scaled-down car, period.

I suspect I’m too late to intervene in the bar fight, but even if Soul Nate ended up having to get a dozen stitches and soaked his favourite shirt in blood, he should at least have the satisfaction of knowing he was right: Stuart Little drove a real car, albeit a miniature real car.

Come at me. (Smashes bottle on desk)

This article was originally posted on Jalopnik.