Should You Use a ‘Dark Web Scan’ to Protect Your Identity?

How (and Why) You Should Wander Aimlessly

Download These Creepy Zoom Backgrounds to Scare Your Colleagues

Calm Your Anxiety By Spending Some Time With Polar Bears

Is Falling Asleep With The TV On Really That Bad For You? 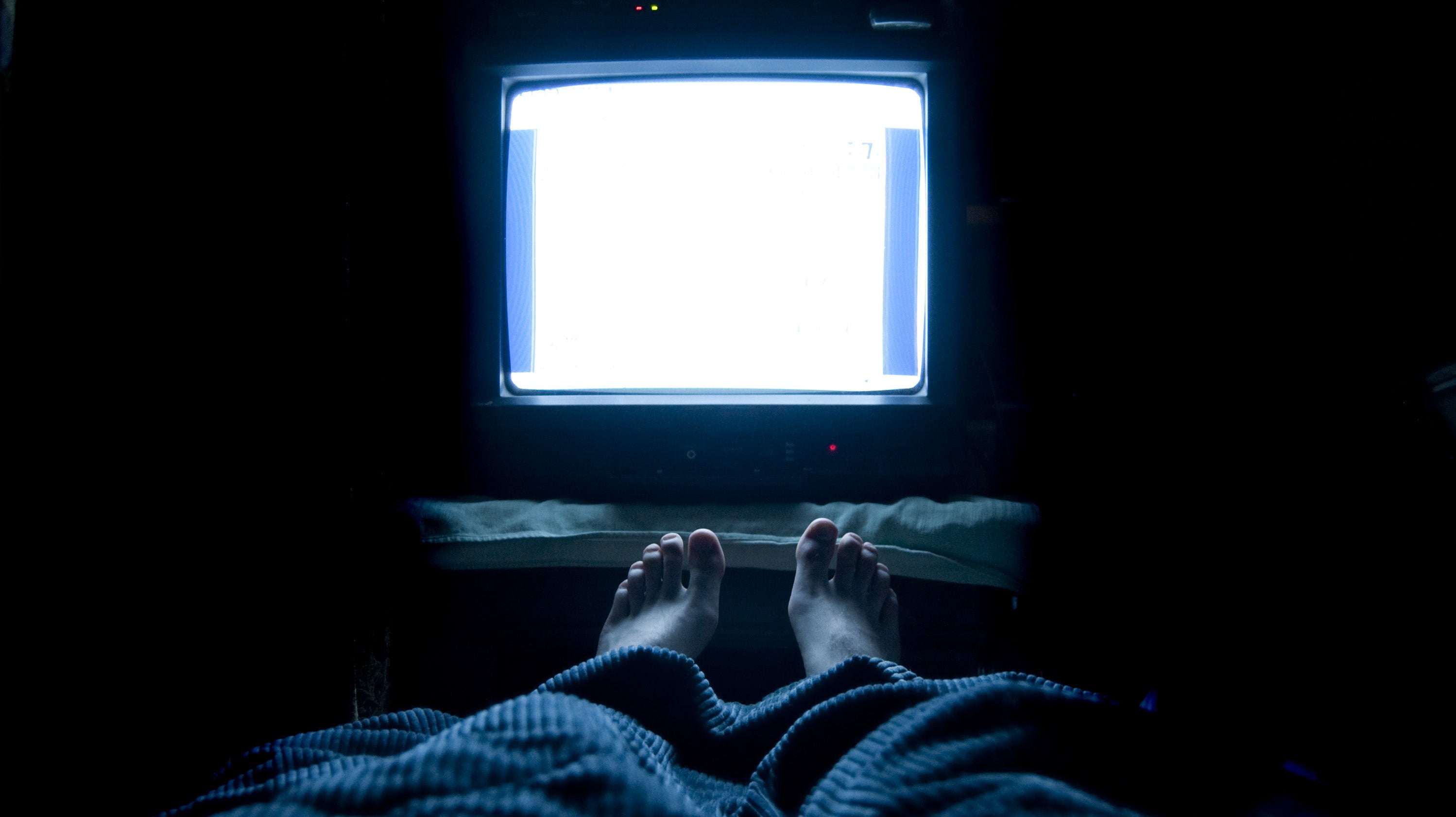 In a perfect world, we’d all power down our electronic devices at least a half hour before bed, take a bath, read a relaxing book, meditate and then drift off to sleep in our freshly washed lavender-scented sheets. But for me”and around 60 per cent of Americans“in reality, this process involves watching TV as we attempt to fall asleep.

I know, I know”sleeping with the television on isn’t just an under-appreciated Billy Joel song: it’s also supposed to be a terrible habit. We’re instructed to remove TVs from bedrooms (or never put one there to begin with), and that’s fine, but thanks to streaming services, we can â€œwatch TVâ€ from our laptops, tablets and phones too, so it’s basically accessible all the time. And is it really that bad?

Why falling asleep to the TV is comforting (for some people)

Though I can’t speak for others who fall asleep with the TV on, for me, a lot of the appeal has to do with my anxiety and PTSD. No matter how many breathing exercises I do, or boring articles I read, as soon as I feel as though I’m about to fall asleep, my brain will play a montage of everything I’d prefer not to think about: deadlines, failures, sick friends and relatives, politics, superbugs, if I inadvertently offended someone in an email, what happens to our bodies after we die”all the stuff I try to push out of my mind in order to be productive during the day. Then, when I wake up in the middle of the night with vivid PTSD flashbacks, I need to visually replace those graphic images with something else, and sticking on an episode of 30 Rock or the Golden Girls helps.

According to Rose MacDowell, the chief research officer at Sleepopolis, I'm not alone. â€œMany people have become accustomed to falling asleep with the TV on to block out other sounds or distract themselves from thoughts or feelings of anxiety while they fall asleep,â€ she says. â€œOthers find the sound of TV soothing, and may have difficulty falling asleep in silence.â€

Why experts say falling asleep to the TV is bad

After hearing from a variety of sleep and mental health experts, it's clear that they are not fans of people falling asleep with the TV on. For example, Rebecca Cowan, PhD, a licensed professional counselor, stresses that sleep hygiene is important because it correlates with our mental well-being. In addition, falling asleep with the television on can disrupt the production of melatonin, which is a hormone that is released that helps us to sleep soundly, she explains. â€œIn my professional opinion, I do not believe there is any circumstance under which having the television on while sleeping is OK,â€ Cowan says.

Along the same lines, Terry Cralle, a registered nurse and sleep expert with the Better Sleep Council explains that watching TV before bed can increase our sleep debt"for instance, if we get sucked into a show and continue to watch it instead of going to sleep. She also notes that our brains still process sounds when we're asleep, so having the TV on all night can disrupt our slumber. Similarly, Mark Burhenne, DDS, author of The 8-Hour Sleep Paradox says that during the stages of sleep before deep sleep, our brain is aware of voices and may respond to them. â€œIn dreams that occur in deep sleep, the audio may even impact what you dream about,â€ he tells Lifehacker.

Burhenne also mentions the blue light emitted from the TV as another drawback, as it is a signal to our brain to stay alert, and may prevent us from falling into a deep sleep. â€œUltimately, when you sleep, you want to avoid stimulating the brain,â€ he says. â€œYour body needs high-quality sleep to â€˜reformat' the brain by clearing it of unnecessary details and consolidating information that you actually need.â€

Sure, falling asleep with the TV on isn't ideal, but not everyone's convinced this should be a strict rule. For example, Jeanine Joy, PhD, a sleep researcher, says that individual differences are not considered when sleep recommendations are published. â€œIn the same way that there isn't one specific diet that is perfect for every person, there isn't one perfect way to sleep that suits every person,â€ she says.

And yes, for some people, that means sleeping with the TV on. But Joy says that if a person goes outside early in the day and gets some exercise at some point, the blue light from a TV may not do as much to disrupt their circadian rhythm, and they may sleep better with a TV on than without it. She recommends using sleep actigraphy to check the quality of your sleep with the TV on. If it indicates that you're sleeping well, then you should be fine falling asleep with the TV on"as long as your partner isn't bothered by it. â€œThere is nothing inherently bad about sleeping with the TV on if the person is sleeping well under those circumstances,â€ she says.

In fact, Joy notes that there are a number of scenarios where having the TV on while falling asleep could be beneficial. For example, the TV can drown out external noises like barking dogs, sirens, fighting neighbours and gunshots. Along the same lines, Eva Cohen, a certified sleep science coach at Kansas-Sleep says that for people with mental health conditions like PTSD, getting distracted from flashbacks with TV shows might help in some cases. But, like most of the other experts, she stresses that it's better not to watch TV within two hours of going to bed, and consulting a therapist to find better coping mechanisms.

What to try instead

If you're someone who absolutely cannot fall asleep without the TV on and is unwilling to try other methods, several of the experts we spoke with suggested wearing blue light-blocking glasses at night. While that's great in theory, blue light blocking glasses really don't do very much, and they're not recommended by the American Academy of Ophthalmology, either.

Instead, Cralle recommends making sure that your TV's sleep timer is on"ideally for 30 minutes, with a maximum of an hour. She also encourages us to consider what we're watching as we fall asleep. â€œIf you think that you must watch TV at bedtime in order to relax and fall asleep, watch something boring: no politics, gunfire/violence, or a â€˜whodunnit,'â€ she says. Rather than something that might rile you up or make you want to keep watching, she suggests opting for â€œa low-key situation comedy"even better, a rerun that you have seen a million times before.â€

But if you are looking to sleep without the TV on, what serves as an effective replacement? Joy says she prefers listening to a small 2018 study did find that binaural beats could help improve sleep quality. Others, like Cowan, recommend falling asleep to a sound machine or relaxing music, while Cralle says others have had luck falling asleep to audiobooks or podcasts.

Rather than focusing on sounds, Cohen suggests trying to channel your vivid imagination by reading fiction stories before bed. â€œThis will help you express your emotions better and reduce stress levels,â€ she explains.

And if part of the appeal of having the TV on while you sleep is that it doubles as a nightlight, you may want to look into some of the new sleep lighting options out there, including smart bulbs that mirror your circadian rhythm (like these from GE) or app-activated lighting.

All of this will likely take some trial and error to find a sleep system that works best for you. And if you're someone who absolutely cannot sleep without the TV on and it's not affecting your sleep quality, know that this habit isn't anything to lose sleep over.