As you drive your internal combustion car, the engine is drinking petrol, gobbling up air, and farting out a continuous stream of carbon dioxide, among other things. This is bad, because CO2 traps heat in the earth’s atmosphere, resulting in a runaway greenhouse effect that will leave earth a barren hellscape.

But, there is another gas in many cars that is over a thousand times more effective at hellscaping the planet.

Early refrigeration systems used CO2 as the refrigerant, but it required very high pressures. Ammonia was also sometimes used, but it was not ideal because it’s toxic. So everyone was pretty stoked when Freon 12 showed up, because it was stable, non-toxic, and operated at pressures just above atmospheric. No downsides!

Many years later, scientists figured out that there was a huge downside. When Freon 12 is released, it makes its way to the upper atmosphere where UV radiation breaks it apart and the remaining chlorine radicals eat up ozone. You might remember the hole-in-the-ozone scare from a few decades ago. We don’t talk about it much anymore, not because it wasn’t an issue, but because decisive global action fixed the problem.

The Montreal Protocol was an international treaty that phased out the production of ozone-depleting substances. Kofi Annan called it “perhaps the single most successful international agreement to date.” 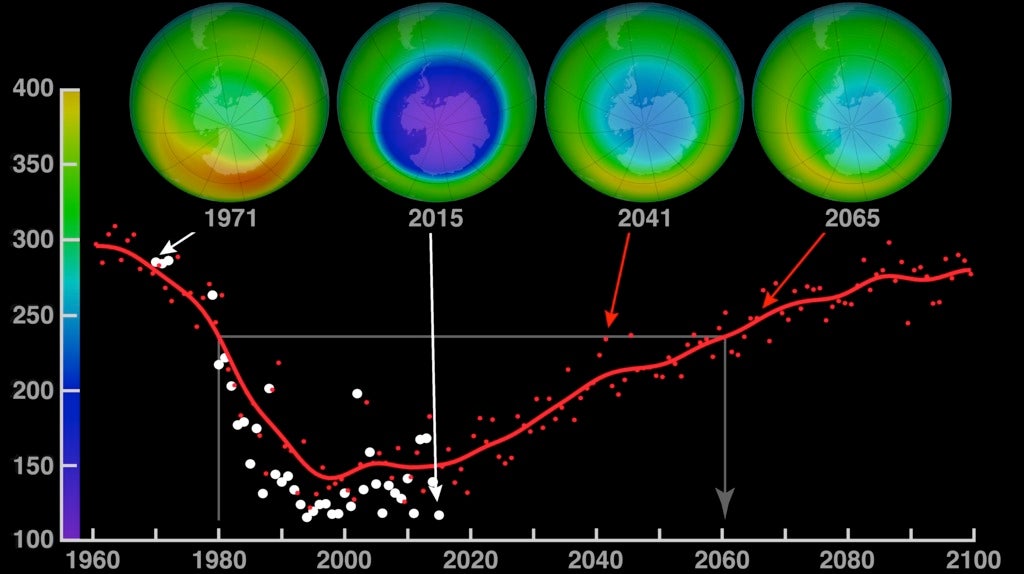 Ozone levels have stabilised and are projected to recover before 2075 (Image: NASA)

Refrigerants like R134a and R410a replaced R12, and these new refrigerants have zero ozone depletion potential. No downsides!

Unfortunately, they have a significant downside. Like CO2, the refrigerant in your air conditioning system is a greenhouse gas, but is over a thousand times more effective at trapping heat in the atmosphere. Global Warming Potential (GWP) is a measure of how much energy a gas traps relative to CO2. R134a has a GWP of 1,430, meaning it is 1,430 worse for the environment than releasing the same mass of CO2. 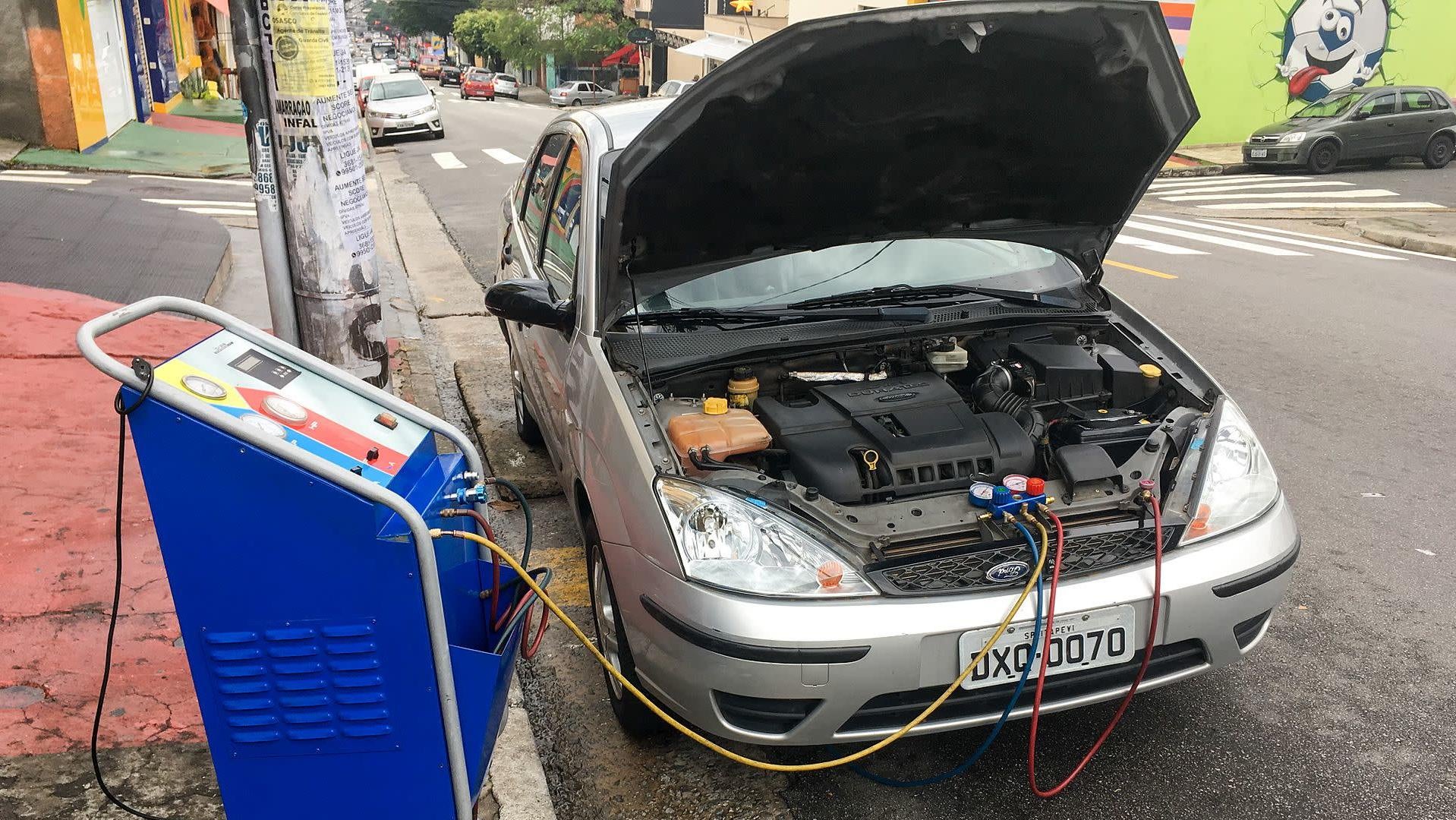 Your internal combustion car continuously emits CO2 every mile you drive, but the refrigerant doesn’t go anywhere, it just cycles around the air conditioning system. The problem comes at the end of your car’s life. The refrigerant can be safely removed from the system and reused, but much of the time it isn’t. It leaks out, is lost in a collision, or is just dumped into the air by a shady mechanic who knows it’s illegal but looks both directions before releasing the gas while twirling his mustache and uttering a “Muwahaha.”

This is a much bigger problem than just cars. HVAC systems in homes and office buildings, refrigerators, vending machines, and anything that is designed to cool things down (and sometimes to heat things up) has refrigerant in it. 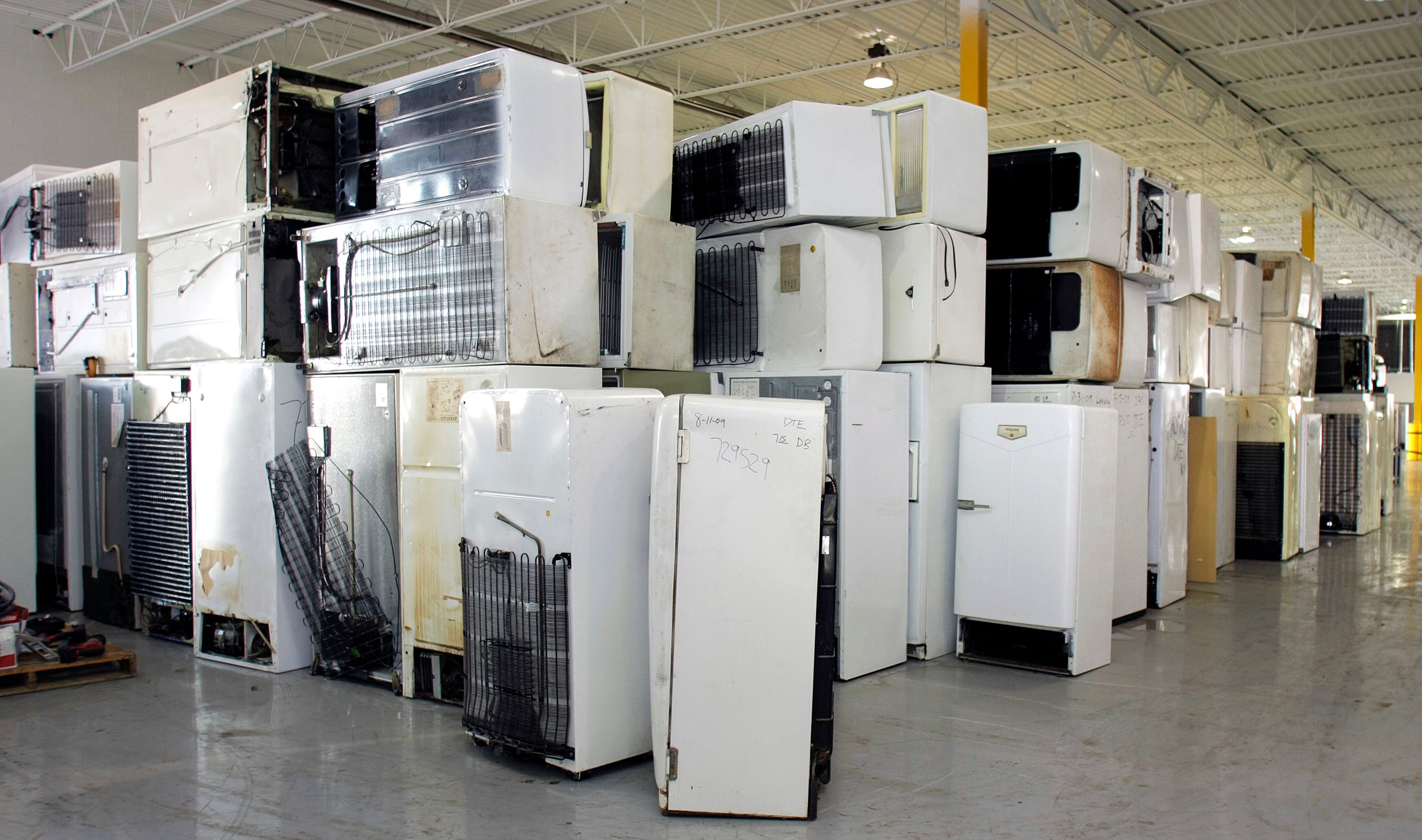 Modern cars use a refrigerant called R1234yf which is only four times worse than CO2 in terms of its greenhouse effect. Low GWP refrigerants like R1234yf have been required for passenger cars sold in the EU since 2017 and will be required for U.S. cars starting in 2021. No Downsides?

Downsides: It contains hydrogen fluoride which can turn into hydrofluoric acid if a fire breaks out. Hydrofluoric acid is nasty, nasty shit. It could also cause problems by contaminating drinking water.

CO2 is a greenhouse gas, but ironically, one of the best ways to reduce our carbon footprint is to use CO2 as a refrigerant. If the CO2 based refrigerant, called R744, is released into the atmosphere it’s not ideal, but it has a much smaller greenhouse effect than other refrigerants and it’s not toxic.

There are some other advantages to a CO2 system. Heat pumps don’t run particularly well below about 20 degrees when they have conventional refrigerants. CO2 based R744 systems run on a higher pressure transcritical thermodynamic cycle that allows the system to run as a heat pump at lower temperatures.

Why is this important? Electric vehicles often have a tight temperature control of the batteries and motor, and will often use the air conditioning system to cool the batteries, motor, and inverter. Internal combustion vehicles like to operate at temperatures that are much higher than the ambient temperature outside, so it’s easy to dump that heat with a radiator. In engineering, we don’t call it a radiator, the correct engineering term is “cooling rectangle.”

No, not really. It’s called a heat exchanger, and it doesn’t work very well unless there is a big difference in temperature between the coolant inside and the air outside. Two hundred degree coolant in 75 degree air works really well. But electric motors and batteries need to be much cooler than 200 degrees, so you sometimes need to use the air conditioning system to keep them cool.

But EVs don’t always need to be cooled, a lot of times they need to be heated up. Lithium-ion batteries suck at cold temperatures. This is a big reason that you still see 12-volt lead-acid batteries in electric vehicles: they work when it’s -4° outside so they can run the system that is needed to heat up the high-voltage battery, so it can work to move the car. If you have a refrigeration system that can operate as an efficient heat pump at a wide range of temperatures, you can use the same system to heat up things like batteries instead of an inefficient electric heater. You could also use it to heat up the passenger compartment more efficiently, mitigating the problem of reduced EV range in cold temperatures.

Mercedes-Benz was the first manufacturer to use a CO2 based air conditioning systems in production passenger cars, installing the system in 2017 and up S- and E-Class cars. Volkswagen has stated its intention to use it in future vehicles, and I suspect we will see it in a lot more future electric vehicles.

Thermal management systems are getting interestingly complicated on electric vehicles, and the higher pressure CO2 systems should make things even more interesting, allowing for more efficient and smarter use of heat and cold to make the ride more comfortable for both the passengers and the powertrain. Fortunately, they’re also less damaging to the environment.