Back in 2016, Twitter made the call to shut down Vine, a video service that it purchased that specialised in the creation of 6-second looping videos. Now, almost four years later, one of the co-creators of Vine has released an app that brings those videos back: Byte.

Available now on Android and iOS, the app is by in large exactly what Vine was: a way to create 6-second looping videos and a platform to share them with the world.

In order to use the app you have to first create an account, which is done right now by signing in via Google. Afterward, you’ll be able to upload and share your own Bytes as well as view those that have been posted by others.

Unlike Vines, which were square, Bytes are shot in Portrait on your smartphone and take up the majority of the screen, which gives you a bit more real-estate to work with.

To shoot one, just tap on the circular shutter button at the bottom-middle of the screen and hold it down to record. You can stop the recording whenever you’d like, or the video recording will automatically stop after 6 seconds. 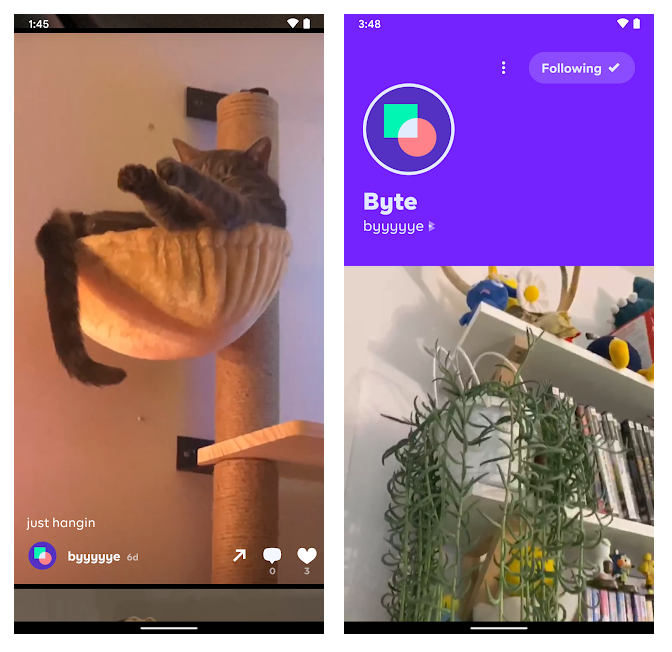 If you’d like a little inspiration, tapping on the search icon will bring up videos that have been shared on Byte by other users. Some of the stop motion, in particular, is pretty fantastic.

Sharing videos right now outside the app is a little awkward. I sent one stop-animation to a friend and the app had to encode it first before it could send it via Facebook Messenger. When it did send; however, it sent a downloaded version of the video, so my friend was able to see it without having to download Byte themselves in order to do so. That’s nice as a person watching the video, and a little concerning as a content creator who might not want my work downloaded and shared around town without me knowing. So poster beware.

That said, if you’ve been missing Vine the past few years, it’s definitely a fun app to play around with.