Where To Watch New Years Eve Fireworks In Australia 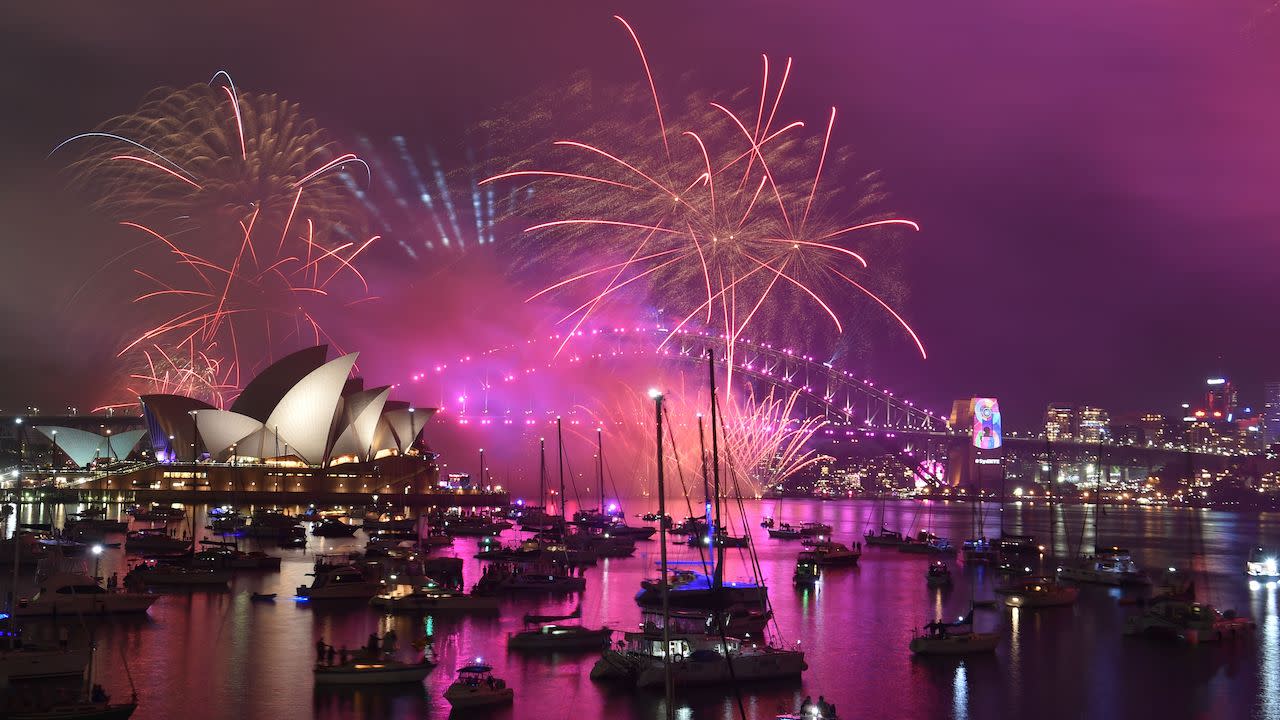 A swathe of Australia is currently on fire. In response, tonight’s firework displays have been cancelled in many locations around the country.

However, if you really must ring in the new year with some fireworks, you still have options. Here’s when and where to watch around Australia – whether you’re keen to catch a pre-midnight show, a live stream or the big show in the flesh.

While the bushfires themselves present the biggest threat to human lives, another lurking danger is impacting the health of thousands more: bushfire smoke pollution. You've probably seen a bunch of scary looking numbers in the news but what do they actually mean? Here's how to decipher the air quality index (AQI) in your area - and what to do when the level becomes dangerous.

After weeks of speculation, it was recently confirmed that Sydney’s big Harbour Bridge fireworks display will be going ahead despite all the bushfires.

“We appreciate that there is a lot of suffering in the community at the moment,” State Premier Gladys Berejiklian said over the weekend. “[New South Wales] has always been a state that’s hopeful about the future, that’s resilient, that’s optimistic. And we need to stay strong so we can keep supporting our communities that are doing it tough.”

What better way to show your support than releasing lots of colourful fire into the atmosphere? But we digress.

Where To Watch New Year’s Eve Fireworks In Sydney

The two fireworks displays off Sydney Harbour will take place at 9pm and midnight AEDT. There are a ton of places you can catch the fireworks from if you’re in Sydney and want to head down. Some of the best vantage points are ticketed, but there are plenty of spots along the north side that will give you a great view of the Bridge.

No matter where you go – it’s recommended you head down early. Tourists and Sydney-siders flock to the bridge on NYE like seagulls to a chip for the yearly spectacular. Although given the current climate – both figuratively and literally – the crowds might be slightly thinner this year.

How To Watch The Sydney Fireworks Online

ABC and iview will have the whole thing live from 8:35pm AEDT and will simulcast on their Facebook page and YouTube channel. This year’s accompanying concert will feature live performances by Casey Donovan, Kate Miller-Heidke, Vika & Linda Bul and more.

You can also livestream the whole event from the comfort of your living room by heading to the Sydney New Year’s Eve site.

Other Fireworks In NSW

If you’re in Sydney and want to see a few smaller fireworks displays, Darling Harbour has its own displays at 9pm and midnight AEDT, and from 7pm hourly water and fire shows.

You could also head down to Coogee Beach for its family friendly fireworks display.

People further out west are a little out of luck this year, however. Most of the big displays, including those in Parramatta and Penrith, have been cancelled.

Where To Watch New Year’s Eve Fireworks In Melbourne

Yarra Park and Footscray Park will light up at 9:30pm AEDT with family-friendly fireworks displays if you’re keen for an early evening.

These fireworks will occur from the city rooftops and have a number of solid vantage points. You can visit any of Melbourne’s midnight live sites including Treasury Gardens, Docklands, Flagstaff Gardens and Kings Domain because Melbourne CBD touts their fireworks as basically impossible to miss if you’re in the city. (Click here to learn more.)

Where To Watch New Year’s Eve Fireworks In Brisbane

The big fireworks celebration in Brisbane happens at South Bank at 8:30pm and Midnight local time. The fireworks display lasts for ten minutes. It’s worth heading down as early as possible to secure yourself a decent position.

Planned fireworks in Ipswich and Armidale have been cancelled however due to ongoing dry conditions.

Where To Watch New Year’s Eve Fireworks In Adelaide

Elder Park, in the heart of the city, plays host to the New Year’s Eve celebrations in Adelaide with fireworks at both 9pm and at midnight, local time. Officially, festivities kick off at 6pm at Elder Park, right next to the Torrens River. You can read everything they have planned here.

Glenelg beach will see fireworks displays at 9:30pm and midnight, along with free entertainment. For a quieter celebration, you could also head to Brighton beach which is accessible by shuttle from Harbour Town.

Where To Watch New Year’s Eve Fireworks In Perth

Perth’s major firework display occurs on Swan River that will hold two separate fireworks displays at 9pm and midnight local time. NYE on the Foreshore is one place to celebrate if you’re looking for a big night, otherwise you can find a vantage point along the river.

Further south sees fireworks displays at the Eastern Foreshore in Mandurah, where the sky will be painted fire at 9pm and midnight. The festivities kick off a little earlier – at 6pm local – and the event is alcohol and smoke free so the kiddies can be safe and happy.

Rottnest Island is a family zone and you can take a free ferry over to the island for a fireworks display at 9pm.

Where To Watch New Year’s Eve Fireworks In Darwin

The Darwin waterfront has two fireworks displays – one at 9pm and one at midnight. A family friendly event kicks off from 5pm local time and there will be a number of Australian artists rocking out on stage from 9:30pm. Take note that the event is alcohol-free.

Where To Watch New Year’s Eve Fireworks In Canberra

Canberra’s Civic Square will be ringing in the New Year with food trucks and family friendly entertainment over on City Hill. However, the planned fireworks display has been cancelled due to a total fire ban in the territory.

Where To Watch New Year’s Eve Fireworks In Hobart

The waterfront along the River Derwent is where you will need to set up shop to see Tasmania’s NYE fireworks displays. If you can find yourself a spot on the waterfront, that’ll be your best bet but you could also catch the exploding sky lights from up on Mount Wellington or Mount Nelson, if you’re more adventurous, when they explode at midnight.