Heatwave Alert: Australia Is Heading Into A Summer Inferno

Summer has already arrived in Australia and the current record for the country’s highest temperatures are expected to be smashed several times over. The days leading up to Christmas are anticipated to be some of the worst with an extreme heatwave forecast for this weekend. Here’s what you need to know.

How To Stay Safe During A Heatwave

Now that we’re heading towards the hottest part of year, it’s time to talk about heatwaves — specifically, how to stay healthy during them. Rather than just trying to tough it out, it’s best to take a few precautions. This is especially true if you or someone you’re taking care of is in a high-risk group, like people 65 and over, children two and below, pregnant individuals or people with chronic illnesses.

The Bureau of Meteorology (BOM) has issued a warning for Australians in a number of areas around the country to be on heatwave alert as temperatures continue to soar into the 40s in coming days. Perth and Melbourne have already seen temperatures swell over the past few days with Adelaide, Sydney and Canberra also set to face severe heat.

Meteorologist Dr. Adam Morgan gives us an update on the heatwave conditions sweeping from west to east through the week.

Sydney is expected to reach the 40s in the city’s west on Thursday 19 December with Friday providing a brief reprieve. However, Penrith is expected to hit 45 degrees again on Saturday 21 December. Canberra too is likely to hit the 40s on both Thursday and Saturday.

In Australia’s southeast, Melbourne is expected to reach 39 on Wednesday and 41 on Friday with cool days in between staying in the mid-20s. Adelaide, on the other hand, is facing three days of 40-degree heat starting from Wednesday until Friday.

If you need a more visual indicator of just how widespread and extreme the heat is, get a load of this map. 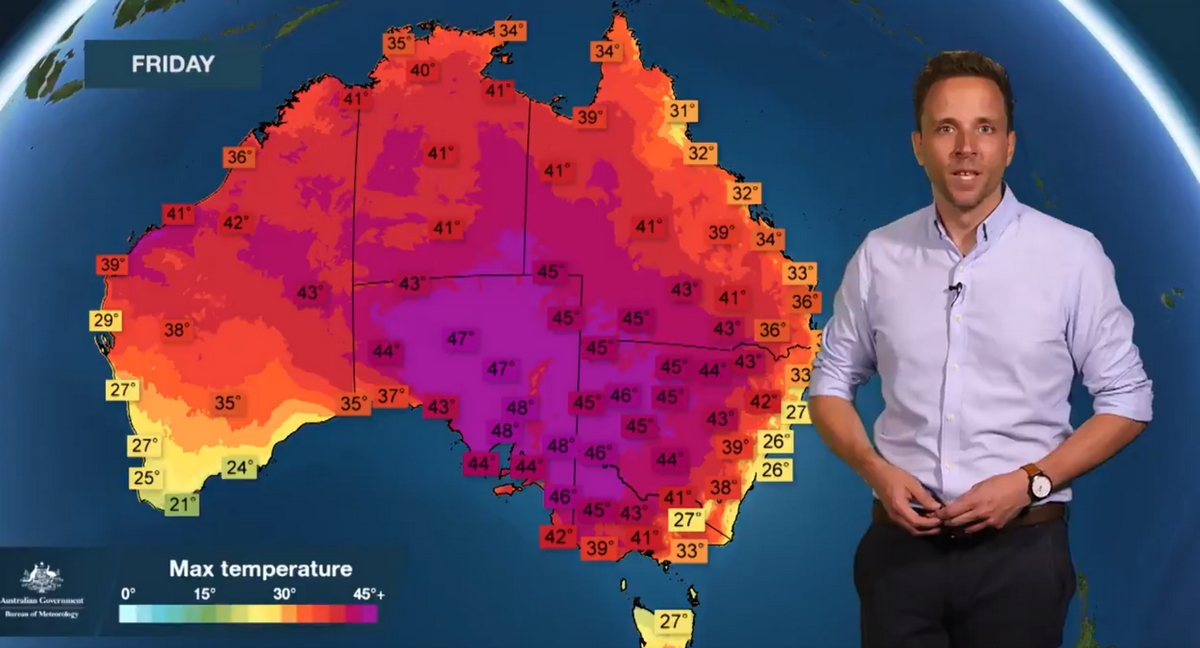 The record for the hottest day ever recorded, according to BOM, in Australia belongs to Oodnadatta Airport in South Australia’s north, which recorded a 50.7-degree day on 2 January 1960. Last summer, between 2018 and 2019, was the hottest on record with BOM recording 2.1 degrees above the average nationally. In fact, the last nine out of ten summers going back to 2008 have been hotter than average. With Australia only three weeks into summer, it’s looking set to be another record-breaking season.

It’s backed up by the facts with BOM predicting the road ahead to be much of the same after this heatwave passes. Specifically, that the 2019/20 summer season will be join the records as one of the hottest and driest summers. A statement that’s becoming all too frequent in recent years and very unwelcome given the disastrous bushfire situation much of Australia’s east coast is facing.

A statewide Total Fire Ban is now in effect through until midnight Saturday 21st December 2019, due to hot and dry conditions across NSW. If you see an unattended fire please call Triple Zero immediately (000). #NSWRFS pic.twitter.com/Ar9w17SgTT

In the State of the Climate 2018 report, BOM and the CSIRO directly linked these conditions to the effects of climate change, stating “observations and climate modelling paint a consistent picture of ongoing, long‑term climate change interacting with underlying natural variability.”

What should I do when a heatwave hits?

The most important thing to remember during a heatwave is to ensure you’re drinking plenty of water. According to NSW Health, in extreme heat, the body has to work pretty damn hard to keep your temperature between 36.1 and 37.8 degrees Celcius so it does this by sweating. Sweating doesn’t always do the job but it uses up a lot of your body’s water so you need to ensure it’s being constantly replenished. Finding cool areas in the shade or heading to air conditioned spaces, like the local library or shopping centre, can help to cool you down.

The people most susceptible to hot weather include babies, young children, pregnant women, sick people and the elderly so if you know someone this might apply to, make sure to check in on them to see how they’re coping.

What about my pets?

It’s hard to know when pets are struggling but some telltale signs include uncharacteristic behaviour and panting. To make sure your pet is safe, you can take a number of steps like putting down a wet towel in the shade, making sure there is plenty of fresh, cool water and popping an ice cube in them, keeping their sleeping spots out of the sun and popping on a fan or some air conditioning.

RSPCA Queensland has a number of tips for how to take care of all your pets from guinea pigs to fish to limit the stressful experience.

How To Survive An Australian Summer

Summer in Australia is hot. Bloody hot, even. Each year the temperature seems to hit a new record and many suffer in the sweltering heat. As we head into the hottest part of the season take a minute to read these tips on surviving the next few months.