When flash storage devices like SSDs started to hit the mainstream, many though it signalled the end of the hard drive. But that’s not been the case. People, from home users through to enterprises have realised the value of a tiered storage solution even if they haven’t thought about it. We take a look at the new tech that will drive the next generation of hard drives.

We use SSDs or flash storage at end points and hard drives for mass storage where performance isn’t quite as critical. However, a number of new technologies are emerging that tell us the hard drive will still be a big deal for many years to come. Here are some of the biggest innovations we’ll see in the coming months and years.

When the first hard drives hit the market, mass storage was measured in terms of single-digit MBs. In the 1980s, a 5MB drive, designed for a personal computer cost close to $2000. Today, a 12TB hard drive costs about a third of that price. We’ve moved from measuring the cost from $/MB through $/GB and now to $/TB.

But as well as cost, the other problem hard drive makers are trying to solve is performance. In some cases, data centre operators have resorted to short-stroking drives to improve performance. This is where a drive is partitioned to less than its maximum capacity so that data is stored in a denser conformation so it can be read faster.

In short, hard drive makers are seeking to increase capacity while improving performance so we can store more data in a smaller space and access it faster than ever before.

So, what new tech is making its way into hard drives to overcome these challenges.

Seagate and Western Digital have been locked in battle for decades as they push ahead with new hard drive technologies. Seagate, during their recent 40th anniversary media briefings, said they have achieved up to 480MB/s of sustained throughput with drives that use dual-actuator technology. They call this technology MACH.2. 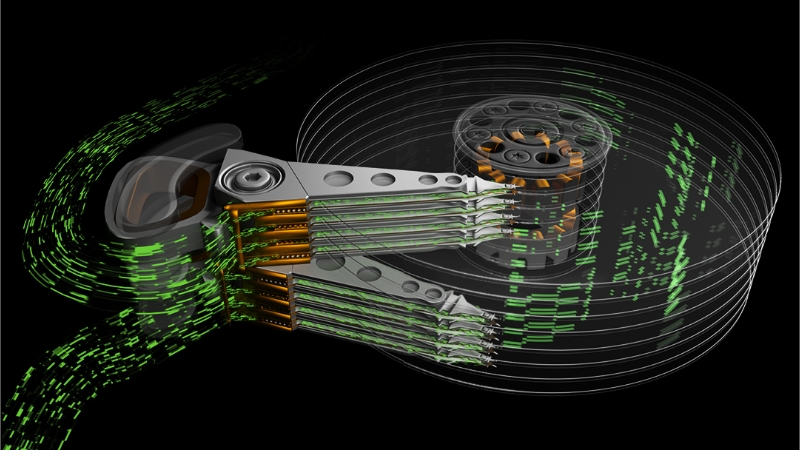 MACH.2 uses two sets of heads that work independently to read and write data from the hard drive platters. The development process to create MACH.2 was interesting with Seagate’s head of operations for products and strategy, Jeffrey Nygaard, telling me the journey from a traditional single-actuator drive to the dual actuator one, with each actuator controlling half of the drive’s arms, required a rethink of how the mechanical systems in a drive work as well as some complex software engineering.

He said that the firmware on a MACH.2 drive runs over five million lines of code.

As there are two heads, the drive looks like two logical volumes to software so extracting maximum value will require applications to be reconfigured to take full advantage. This technology isn’t just a plan on a roadmap. MACH.2 drives are in operation with some of Seagate’s large customers to ensure they are enterprise ready.

The idea is that both these technologies will allow the drive makers to pack the bits that need to be flipped to store our data closer together.

HAMR uses heat, in the form of a tiny laser that activate for nanoseconds, to heat the disk surface to flip the data bits to read and write data. Tiny regions of the dock surface reach over 400 degrees and return to room temperature in nanoseconds.

MAMR achieves a similar performance outcome but uses a microwave emitter to achieve a similar outcome. There’s a good explanation of HAMR and MAMR at Overclocker 3D.

Seagate has produced 16TB drives that are being tested by customers with a goal of having them in the market next year with 20TB drives. Larger capacities will follow. And while MACH.2 may require software changes to take advantage of the two head, HAMR drives will work just like older drives – just with more capacity.

Not all data needs to be accessed at the same rate. While you may need your current working documents instantly, backups can be stored on slower media. What if you could prioritise data access on physical media.

Software is used to dynamically manage a drive, without any end-user intervention, so that most-used files are on the fastest “hot” storage, while less-er used data is stored on “warm” or “cold” partitions. The proportion of a drive’s media that’s configured for performance or capacity can be changed at any time, even after deployment.

Security is on everyone’s mind these days. And, as we have learned from a number of recent incidents and cases, the big question around data encryption is key management.

As well as encrypting data on disks using hardware encryption with the only key created and held by the drive’s owner/user, drive erasure is achieved by deleting the key on the drive. There is also a key that links the drive with the device it’s installed in. So, if the drive is removed, placed in another chassis and the new owner/thief tries to a access the data they cannot even if they have your encryption keys.