The Best Apps For Solving A Rubik’s Cube

A Rubik’s Cube or “magic cube” can be configured over 43 quintillion ways, and every configuration can technically be solved in 20 moves or less. In practice, the most expert human cube solvers usually need more than 40 moves. But these mobile apps can solve it faster—or they can teach you how to solve like an expert. Here are the best ones.

There are a lot of cube solver apps, and each one has its own quirks and flaws. Whichever you use, you’ll run into one problem or another. So have some patience, and give each app a couple of tries before moving to another. 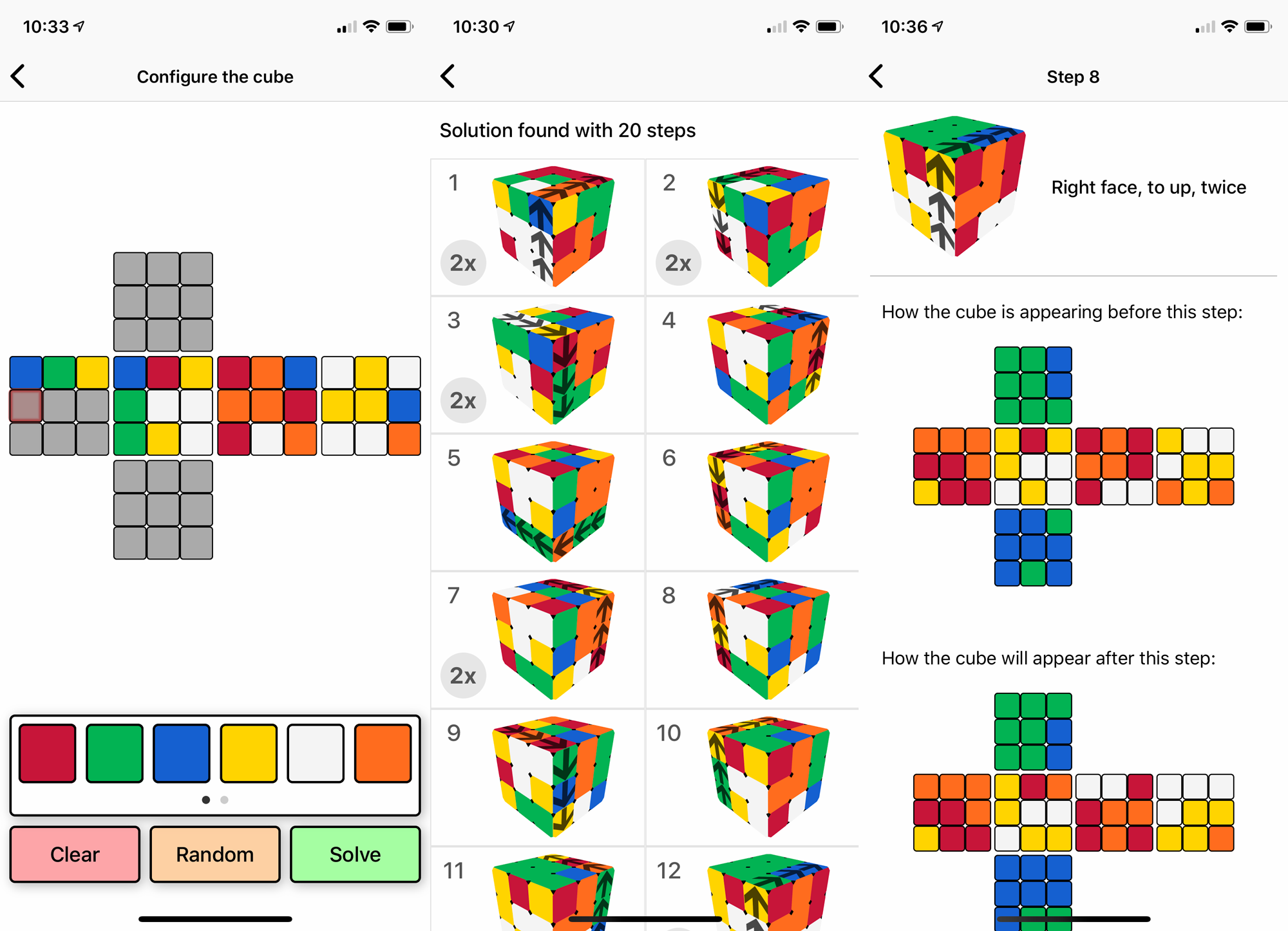 This app either solves your cube for you, or teaches you how to solve your cube. Either way, you manually enter the current configuration of your cube, tapping the right colours to fill out your cube.

This app has a great input system, where you can kind of “type” the colours onto your cube in order, or select specific squares to fill. It’s the most intuitive of every app I tried, except for the one that just uses your camera.

If you ask it to solve the cube for you, then Magic Cube Solver gives you a list of pictorial instructions. Every app displays instructions differently too, and MCS does it best. While it’s possible to lose your place, you have all the steps in front of you, like a Lego instruction booklet. You can click any move to see what the cube looks like before and after it. MCS is very efficient, always solving a cube in 22 steps or less. 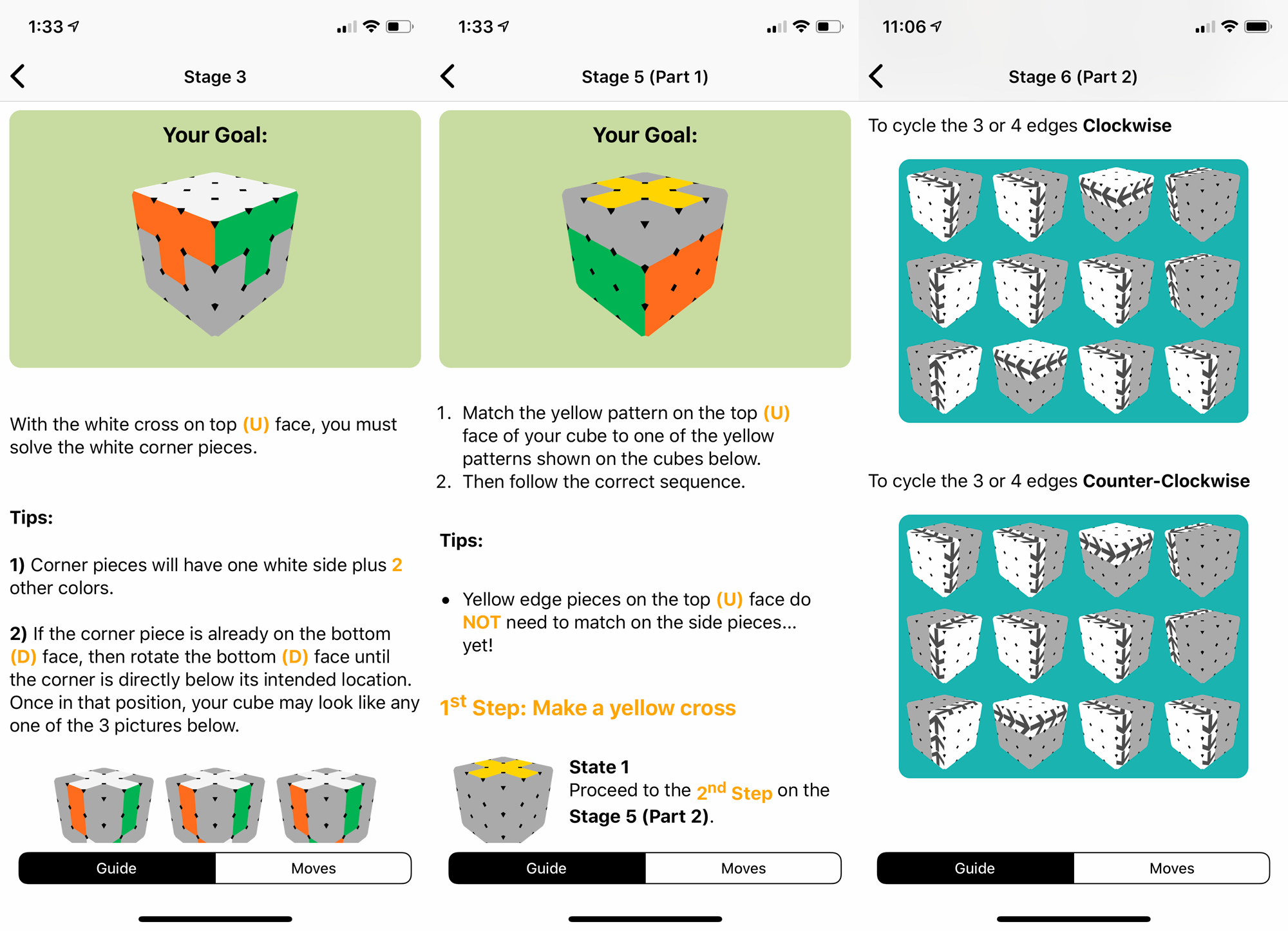 If you ask to “solve and learn,” then MCS does something amazing. Many guides can teach you the general strategy for solving a cube. (For example, the first step to solving a cube (at least for beginners) is forming the “white cross”: lining up the four white edge pieces around the white centre piece.) But MCS can teach you that strategy using the specific configuration of your cube.

For example, MCS might notice that with this cube, it’s quicker to start with a green cross, or a red cross. The guide tells you what kind of thing to do, so you can figure out the exact moves yourself. (You can peek at the moves, but they only work if you haven’t tried doing it for yourself yet.)

If I wanted to learn how to solve any cube without help, I’d practice by messing up my cube, entering it into MCS, solving the cube with the app’s help, and repeating.

The best app for “cheating” 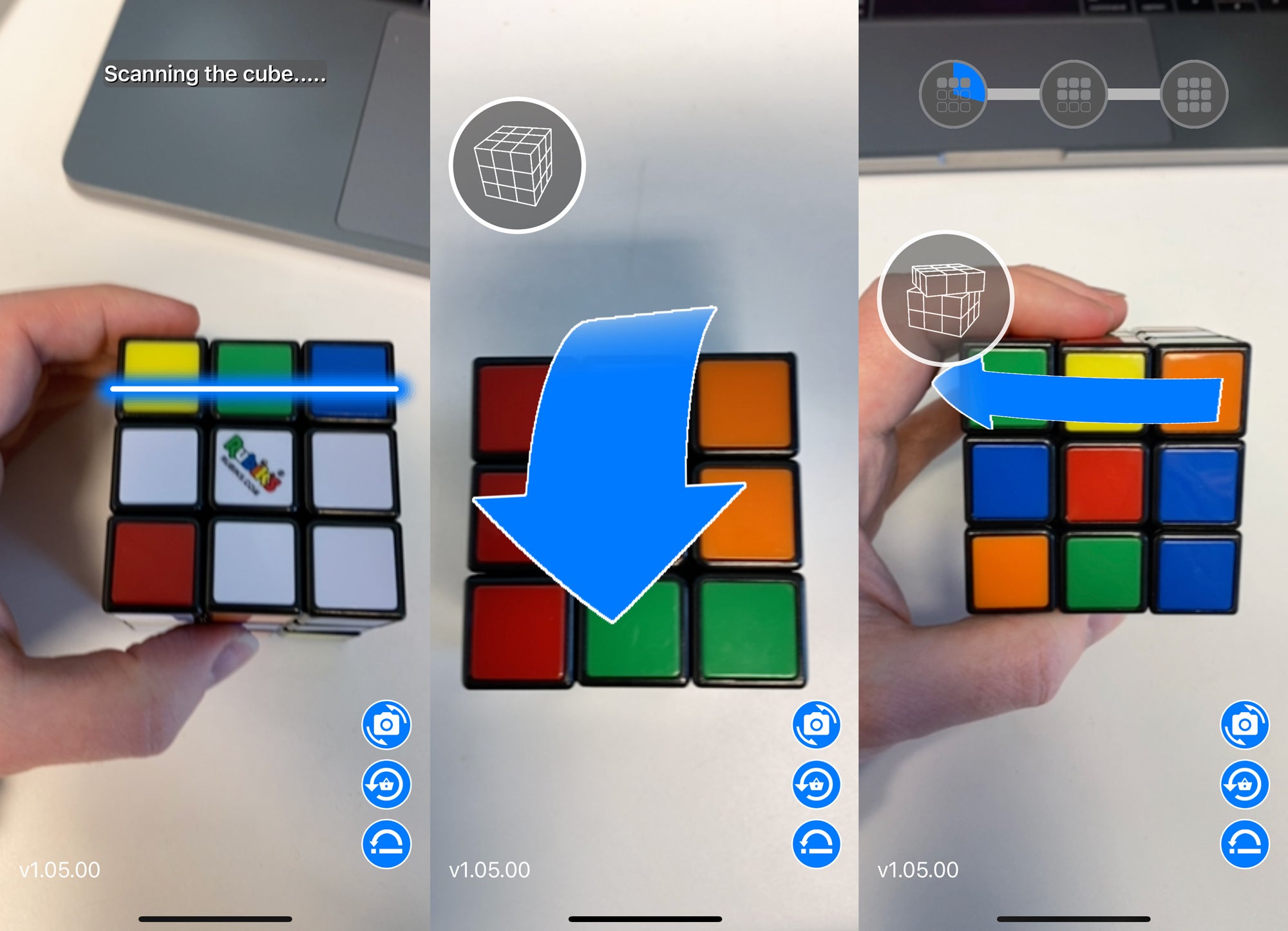 This app solves your cube for you by telling you what moves to make. It’s the only AR-based solving app I found. Pointing your camera at your cube and show the app every side. The app will recognise the colours, then use arrows to tell you what to turn. Just follow its instructions and you’ll “solve” the cube.

There are two big downsides: First, you won’t learn how to solve a cube yourself. Second, it’s physically awkward. Unless you can prop up your phone pointing at the cube, you’ll have a hard time moving the cube with your other hand.

But because you don’t have to manually input your cube configuration, this is still the fastest way to finish a cube.

The app is way underrated in the app store, thanks to confusion about whether it’s actually free. You pay one dollar, once, but you only pay it when your cube is mostly solved. You never have to pay anything again.

If you want to get good at solving cubes, you should try out these other cheap or free options too. You’ll learn the Rubik’s Cube better by seeing it through all these app’s perspectives.

A no-nonsense guide to cube solving, using words, notation, and 3D illustrations. Try this if you like a mathematical, minimal approach. (This app won’t help you solve a specific configuration.)

A very useful guide to general solving methods, with some explanations of specific situations that I didn’t see in the other apps. The ads are a little buggy, so pay to remove them.

A competent app for auto-solving a cube, which uses the camera to fill in your cube configuration. (You’ll have to fix a few cells manually.) The step-by-step solving interface isn’t as foolproof as the MCS instructions, but I like the way it visualizes the cube. I prefer it to the updated version, Cube Snap 2.

A standard cube-solving app, worth trying if you’re sick of our top picks. Colour entry is awkward, requiring you to pick each colour from a palette to apply to certain squares.

All these apps are more useful if you also watch a couple of videos about solving. Try this Wired tutorial, or this solver’s homemade video, or this video full of generic peppy music. They have some differences of method, but not enough to confuse you.

Rubik’s Solver: Android/iOS, free, no ads/$2.99 for all features

The official Rubik’s Cube teaching app is a mess. Its interface is unintuitive. The tutorial for solving your own cubes is hard to understand, jumping back and forth between diagrams and badly written videos. To even start using the app, you have to request a verification email twice because of a bug. Don’t waste your time (or your two bucks) on it just because it’s the official app.