Star Wars Recap: Everything You Need To Remember From ‘The Last Jedi’ And ‘Force Awakens’

After two long years, the third and final instalment of the new Star Wars trilogy is finally upon us. Star Wars: The Rise of Skywalker releases in select cinemas at midnight tonight.

If it’s been a while since you last saw 2017’s The Last Jedi, here are all the plot details that you’ll need to remember before seeing the new movie. (We’ve also included a recap of The Force Awakens.)

The video below from the aptly named Movies in Minutes distils all the major plot beats from The Last Jedi in just four minutes. If you’re pressed for time, this should bring you up to speed.

Can’t watch the video for whatever reason? No worries! Here’s a breakdown of what you need to know.

The movie kicks off with a First Order attack on a Resistance base. We are treated to a spectacular space battle that would traditionally end one of these movies. It’s great! 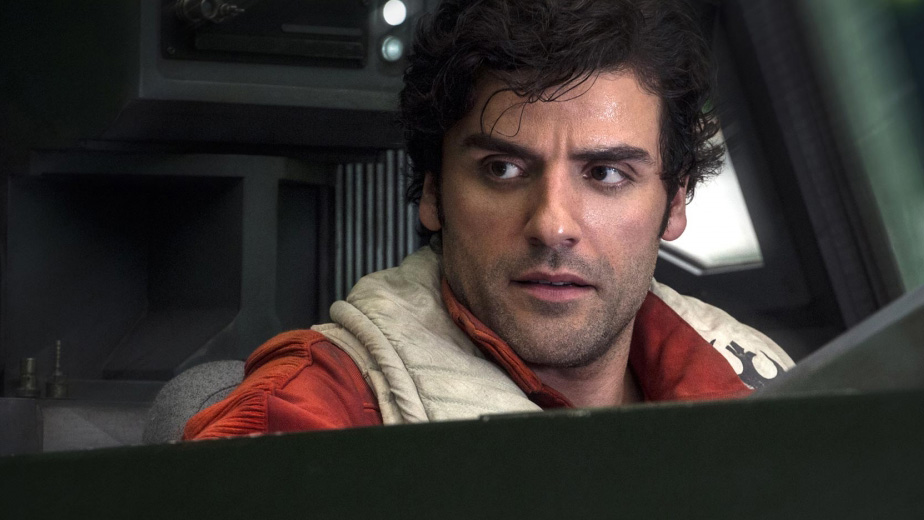 Despite bringing down an entire dreadnought ship, Poe Dameron (the dreamy pilot guy from the first film) proves he’s a little too hot-headed and impulsive to be an effective leader. After joining up with the escaping fleet, General Leia gives him a dressing down and demotes him.

Across the galaxy, Rey is attempting to convince Luke Skywalker to join the fight, but he ain’t having a bar of it. After a bunch of cajoling, he agrees to train her in the ways of the Force but begins to have second thoughts after realising she’s attuned to the dark side.

Meanwhile, the Resistance is having an extremely rough time due to the First Order working out how to track their escape fleet through hyperspace. Finn and BB-8 embark on a covert mission to defuse the First Order’s tracking system. 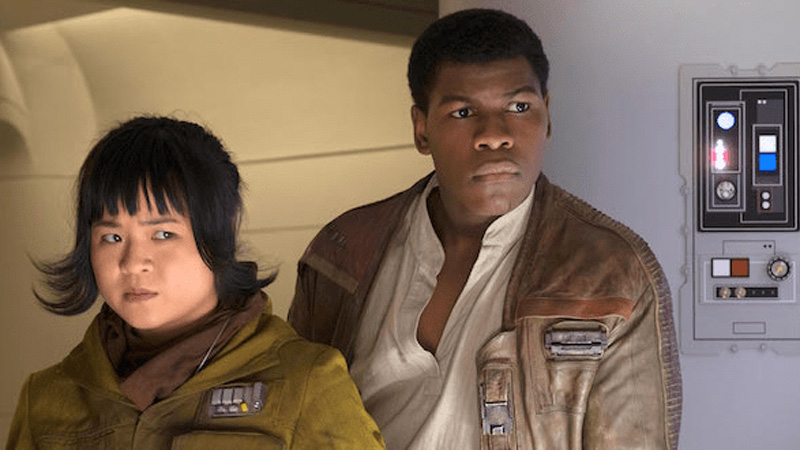 Along for the ride are series’ newcomers Rose Tico (a Resistance maintenance worker who harbours feelings for Finn) and DJ (a dubious hacker they recruit along the way.) Unfortunately, things don’t go according to plan and they all get captured. With the mission foiled, the Resistance fleet starts to get picked off, ship by ship.

Over in The First Order, Kylo Ren is still struggling to live up to the legacy of his teen idol, Darth Vader. He also establishes a telepathic link with Rey on Luke’s island which neither of them fully understand.

Via flashback, it is revaled that Luke briefly contemplated killing Kylo due to the evil he sensed – but he could not bring himself to commit the deed. In some neat Rashomon style storytelling, we see the same scene from Luke and Kylo’s conflicting viewpoints. This misunderstanding is what caused the rift between teacher and pupil that helped tear the whole galaxy apart.

Despite Kylo’s unforgivable sins, Rey is desperate to bring him back to the light side of the Force. Against Luke’s wishes, she travels into the heart of enemy territory to confront Kylo and Supreme Leader Snoke alone – just like Luke did in The Return Of The Jedi. A big battle ensues and Rey escapes. Despite all the inner conflict, Kylo finally commits fully to the dark side. 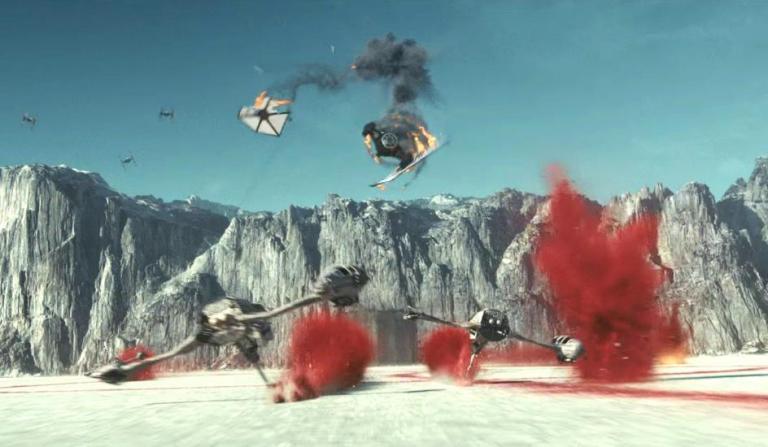 The movie ends with a final showdown on an uncharted planet filled with red salt (where some of the more visually arresting images from the trailers come from). All hope seems lost… until Luke appears out of nowhere to save the day. The surviving resistance fighters make their escape with the knowledge that their struggle against the First Order will ignite a wildfire of resistance across the galaxy. End credits.

Want to know more? Here are the big, no-holds-barred spoilers!

Following the untimely death of actress Carrie Fisher (and a none-too subtle hint in the trailer), many believed general Leia Organa would be killed by her evil progeny Kylo Ren, just like Han Solo.

Instead, Kylo deliberately spares her life. Nevertheless, her ship gets blown up by a pair of Kylo’s underlings, causing her to be sucked out into the vacuum of space. HOWEVER – she survives this cataclysmic event (presumably because she is Force sensitive) and lives to fight another day. This means the filmmakers now need to explain her absence in the third film. Awks.

In the final showdown with Kylo Ren, it is revealed that Luke isn’t actually there. At least, not physically. He was simply projecting an image of himself from his island using the Force. It was all a ploy to buy the Resistance time to make their escape.

Despite this, after the battle, Luke looks off into the heavens and slowly disappears into the ether. Presumably, projecting a hologram across the galaxy expended too much Force. Another OT hero bites the dust.

We did not see this one coming. Supreme Leader Snoke is this trilogy’s answer to Emperor Palpatine, so we were fully expecting him to stick around for the final act. Instead, he gets chopped in half by his protege Kylo Ren. We can’t say we’re sad to see him go – Snoke was one of the weakest aspects of The Force Awakens.

This does cause a bit of a villain vacuum though; neither Kylo Ren nor High Commander Hux are particularly formidable. Maybe the Knights Of Ren (former Jedi pupils turned to the Dark Side by Kylo) will supply the threat that Part IX sorely needs.

In one of the funniest moments of the film, Chewie sits down for a nice meal of roasted Porg, only to be guilt-tripped by the onlooking survivors. Remember that whole “who would eat a Porg” thing that trended on Twitter? I’m now convinced that Disney’s shady organic marketers orchestrated the whole debate. TRUST NO ONE! (Wait, wrong franchise.)

The mystery surrounding Rey’s parentage is finally uncovered. It’s not Luke, or Han or anybody else from the Star Wars mythos. Turns out they were alcoholic junk traders who sold their kid for booze. Remember, anyone can be strong with the Force – Darth Vader himself was just some slave kid.

Granted, this information comes via arch villain Kylo Ren and could therefore be suspect – but it is heavily implied that Rey has always known this fact and just wanted to believe otherwise. Plus, we can’t see what purpose revealing her parentage in Part IX would serve. She knows who she is and any self-doubt has already been erased. 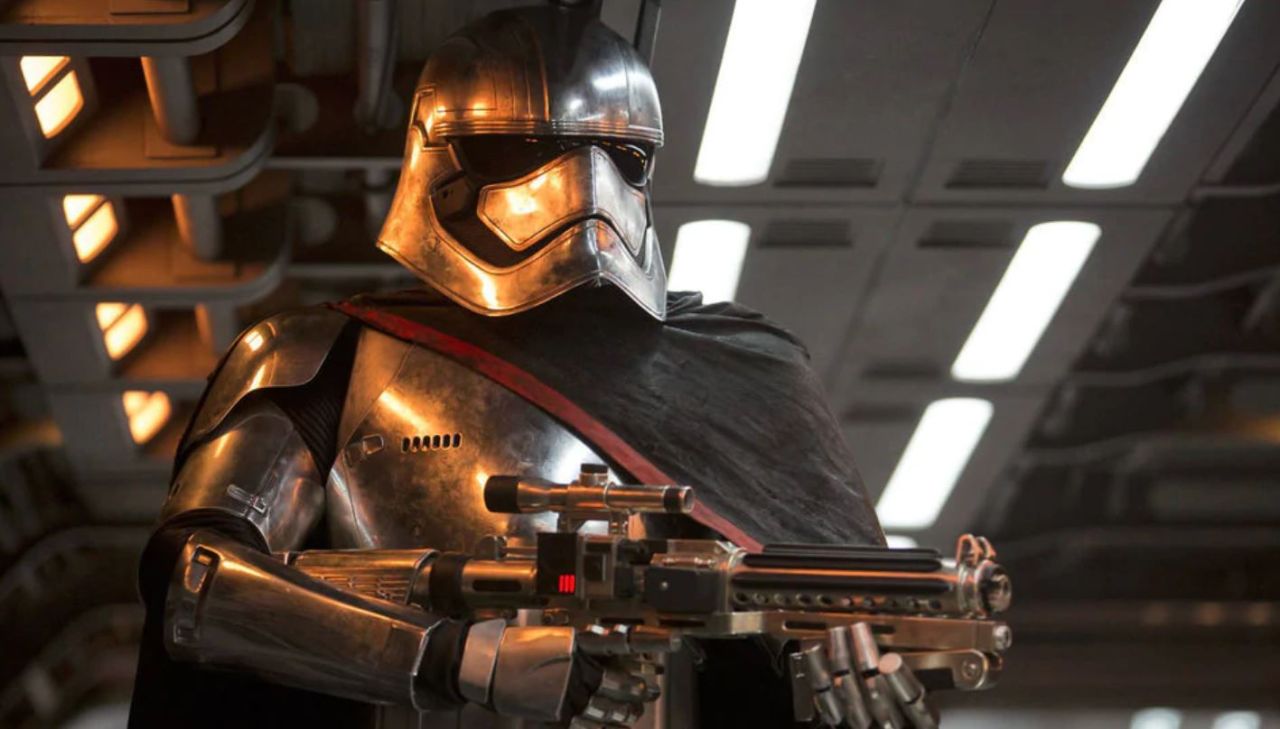 Gwendoline Christie’s Phasma is pretty much wasted in this movie – just like she was in The Force Awakens. We do get to see approximately nine percent of her face before she kicks the bucket though.

The “It’s A Trap!” guy gets blown up off-screen in a First Order attack. Bummer.

Yoda got a cameo!

Everyone’s favourite intergalactic Muppet has a tête-à-tête with Luke about setting dusty Jedi tomes aside and joining the fight. The pen might be mightier than the sword, but a lightsaber trumps them both.

Finn got a kiss!

A badly injured Rose plants one on Finn after saving his life. It’s not clear yet whether her feelings are reciprocated.

Laura Dern is a badass

Not a spoiler, just a fact.

Can’t remember what happened in The Force Awakens either? Are you sure you even want to see this movie? Anyways, here’s a bite-size video recap from the aforementioned Movies in Minutes channel. Enjoy!