Particulates are just one component of air pollution, but they pose a significant health risk—especially the ones that are smaller than 2.5 microns. Particulate pollution can aggravate asthma and can contribute to heart disease, stroke, and other health conditions. So…how much are you breathing in?

How Does Bushfire Smoke Affect Our Health?

New South Wales and Queensland are in the grip of a devastating bushfire emergency, which has tragically resulted in the loss of homes and lives. But the smoke produced can affect many more people not immediately impacted by the fires – even people many kilometres from the fire. The smoke haze blanketing parts of NSW and Queensland has seen air quality indicators exceed national standards over recent days.

The New York Times has a tool that will compare your city’s levels of air pollution (as calculated by Berkeley Earth, which also has some nice maps) to those of some of the most polluted cities in the world. 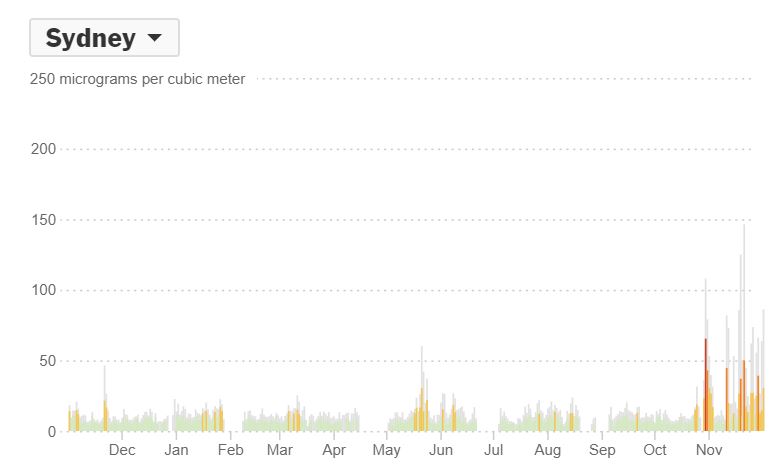 In Sydney NSW, the worst level of particulate pollution last year was 146 micrograms per cubic metre, a level that’s considered “unhealthy.” And we’re currently in our worst month of 2019, as demonstrated in the graph above.

It gets worse overseas, though. Some California cities have particularly bad air pollution, as measured by the worst concentration in each year, thanks to the wildfires that are becoming more common because of climate change. San Francisco rates as “very unhealthy” with a top measurement of 197. Beijing has a level listed as “hazardous” and New Delhi merits “extreme” with a whopping 900 µg/m3.

If you’re in an area with high levels of pollution, you can wear a particulate-filtering mask. But the best way to address this problem is by encouraging big decision makers—companies and, more importantly, governments—to take action to reduce the amount of pollution that’s generated.

The World Health Organisation notes that the biggest drivers of air pollution are also responsible for carbon dioxide emissions. That means that policies that reduce air pollution “offer a ‘win–win’ strategy for both climate and health, lowering the burden of disease attributable to air pollution, as well as contributing to the near- and long-term mitigation of climate change.”