Some life-changing events are preserved in perfect detail, like insects trapped in amber; some weasel their way into your consciousness so thoroughly that you’ll never again know for certain what life was like before. I couldn’t tell you where I was when I first learned about Garth’s Breakfast Bowl, but I do know that I’ve thought about it roughly once a week for what feels like my entire life.

If this is your first time reading the words “Garth’s Breakfast Bowl,” the details will either make or ruin your day, depending on your stance on carbs and pork. It’s bacon, eggs, cheese, sausage, tater tots, and tortellini layered on top of each other in a big bowl like a parfait. As legend has it, this is what best-selling solo artist of all time and Chris Gaines alter-ego Garth Brooks loves most in the world for breakfast. I am obsessed with it.

I strongly recommend taking 4 minutes and 11 seconds of your Friday afternoon to watch Trisha Yearwood and her daughter prepare The Bowl; it’s an experience you won’t soon forget. In the video, as she drops garlic and cheese tortellini into boiling water, Trisha states very matter-of-factly that “this” — which is to say, garlic and cheese tortellini, specifically — “is what Garth requires.”

I’ve watched it dozens of times, with each viewing inspiring new questions. How did Garth Brooks come to require garlic and cheese tortellini in his Breakfast Bowls? (I have nothing but respect for this; breakfast pasta is a legitimate life choice. I’m just curious.) Whence the namesake Bowl? Why not serve the components individually? And, because I truly don’t know what’s good for me—where the hell is the gravy?

The world does not need this; I made it anyway, and I refuse to apologise.

This last question, the newest and by far the most perverse, set me on a dangerous path. The only thing better than a pile of breakfast meats and carbs, I reasoned, is that same pile covered in sausage gravy. Before long, I’d schemed up a cross between my cousins’ absolutely banging sausage-and-canned biscuit casserole and the Yearwood-Brooks Ritual Breakfast Pile—but with gravy. The world does not need this; I made it anyway, and I refuse to apologise.

It should not come as a shock that Garth’s Breakfast CasserBowl is very, very good. The canned refrigerated biscuits and sausage gravy tie the disparate parts together into something like an extremely fucked up, deep-dish breakfast pie. It’s a rich, cheesy, pervasively porky carb smorgasbord—exactly what you need to survive the most brutal hangover season of the year. And, true to the spirit of the original, it’s extremely easy to put together. 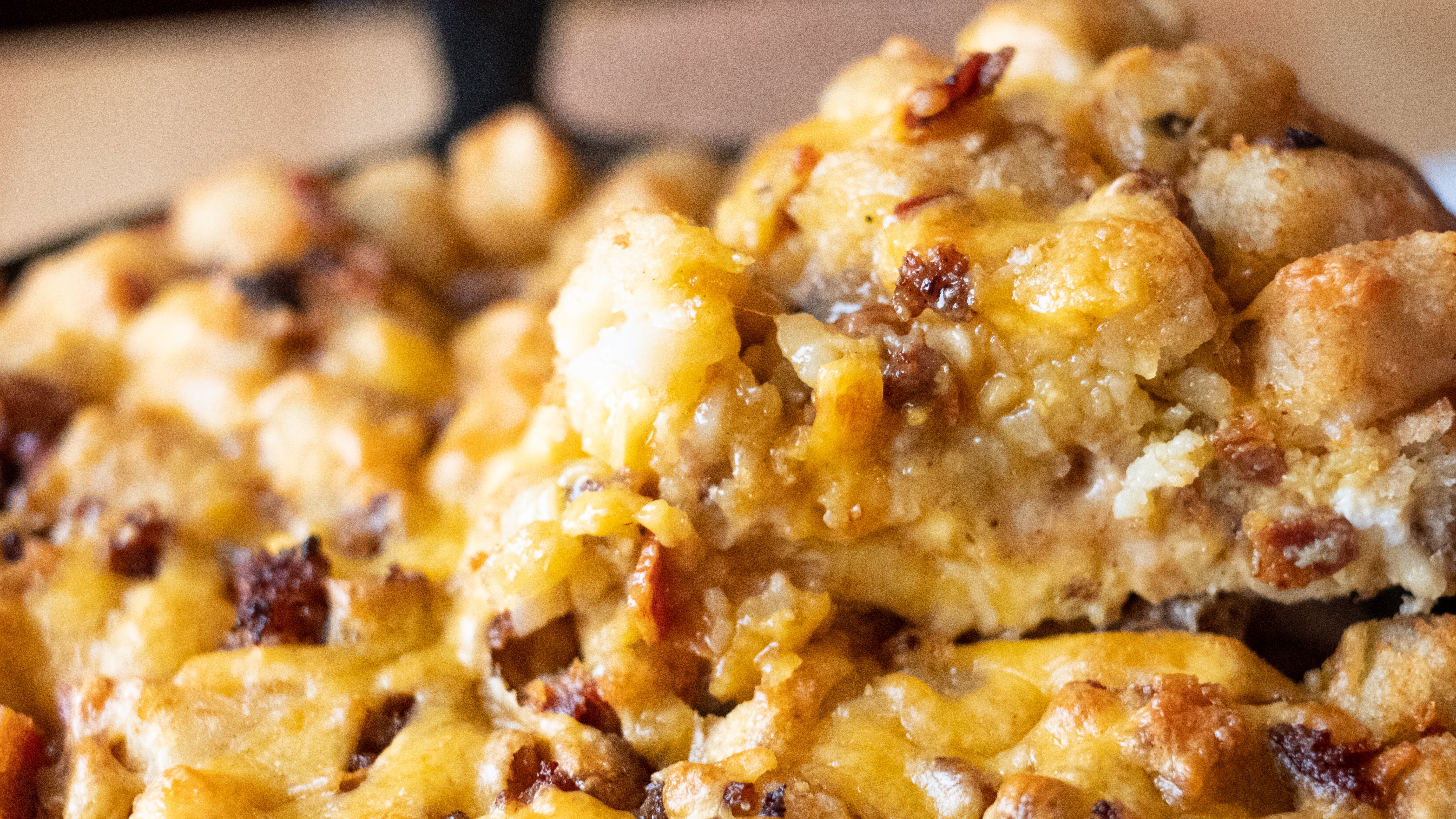 Should you choose to make this affront to God, man, and everything good in this world, you will need:

Cook the bacon until super-crispy using your favourite method. I arranged mine on a rack set inside a foil-lined sheet pan and baked it for about 30-40 minutes at 190 degrees Celsius. You absolutely will not need any extra grease here, so pour off the fat as it accumulates, reserving it for another use if desired.

Next, make the gravy. Cook the sausage over medium heat in your biggest, deepest ovenproof skillet until crisp and cooked through, about 8-10 minutes. Scoop out one big slotted spoonful and reserve it for the topping. Add the flour to the skillet and stir for a minute, then gradually stir in the milk. Simmer for five minutes until smooth and thick; season with salt and pepper to taste. Pour the gravy into a separate bowl, leaving a thin layer on the bottom of the pan. 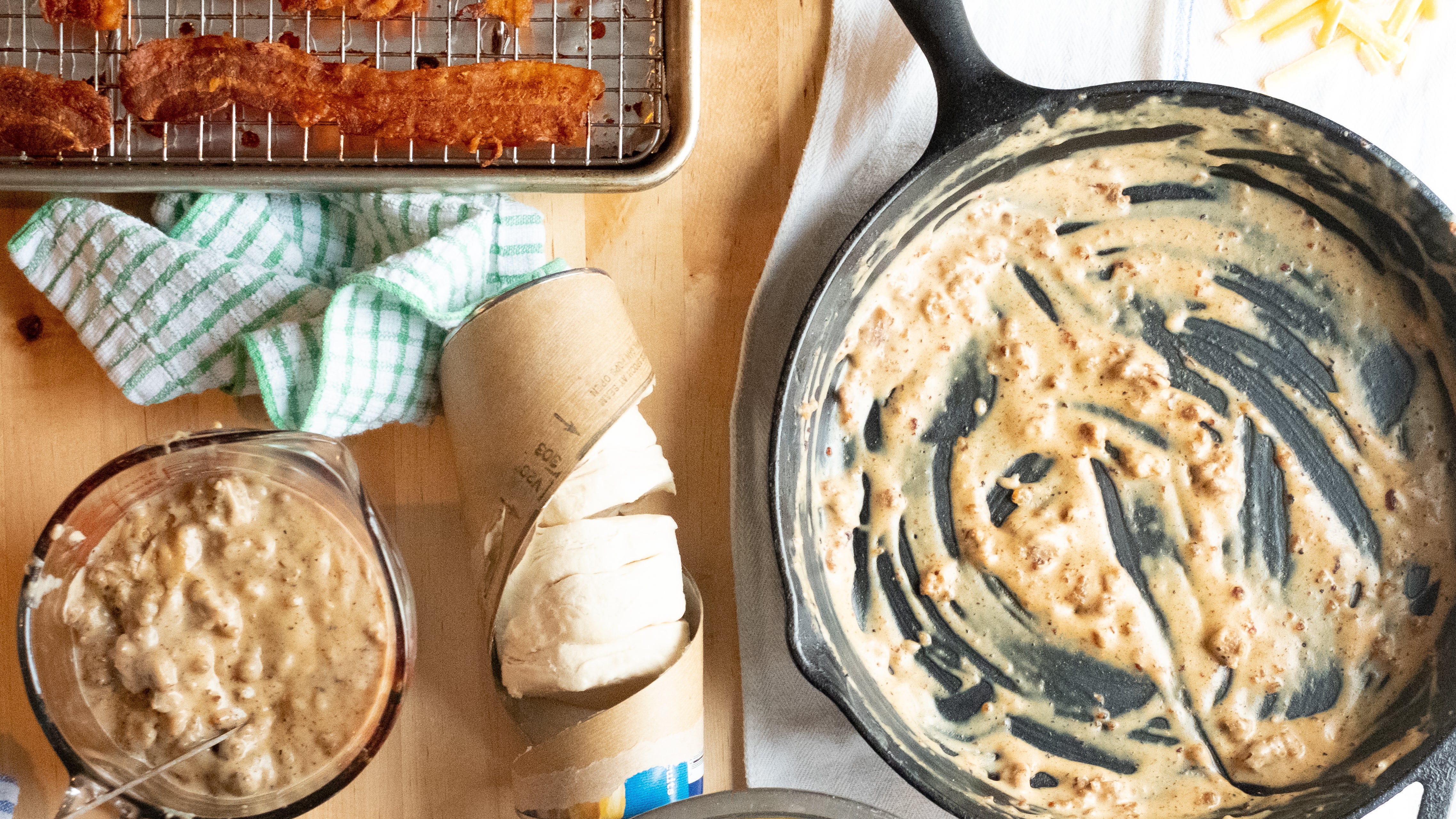 When the bacon and gravy are ready, it’s assembly time. Take half the canned biscuits and tear them into smallish chunks. Scatter those across the bottom of the gravy skillet.

Crumble all but a handful of the bacon over the top, then sprinkle on half the cheese. Dollop half of the gravy over that. Spread the tortellini evenly over the first layer of gravy, then pour the remaining gravy on top. Add more cheese, reserving a handful or two for the topping. 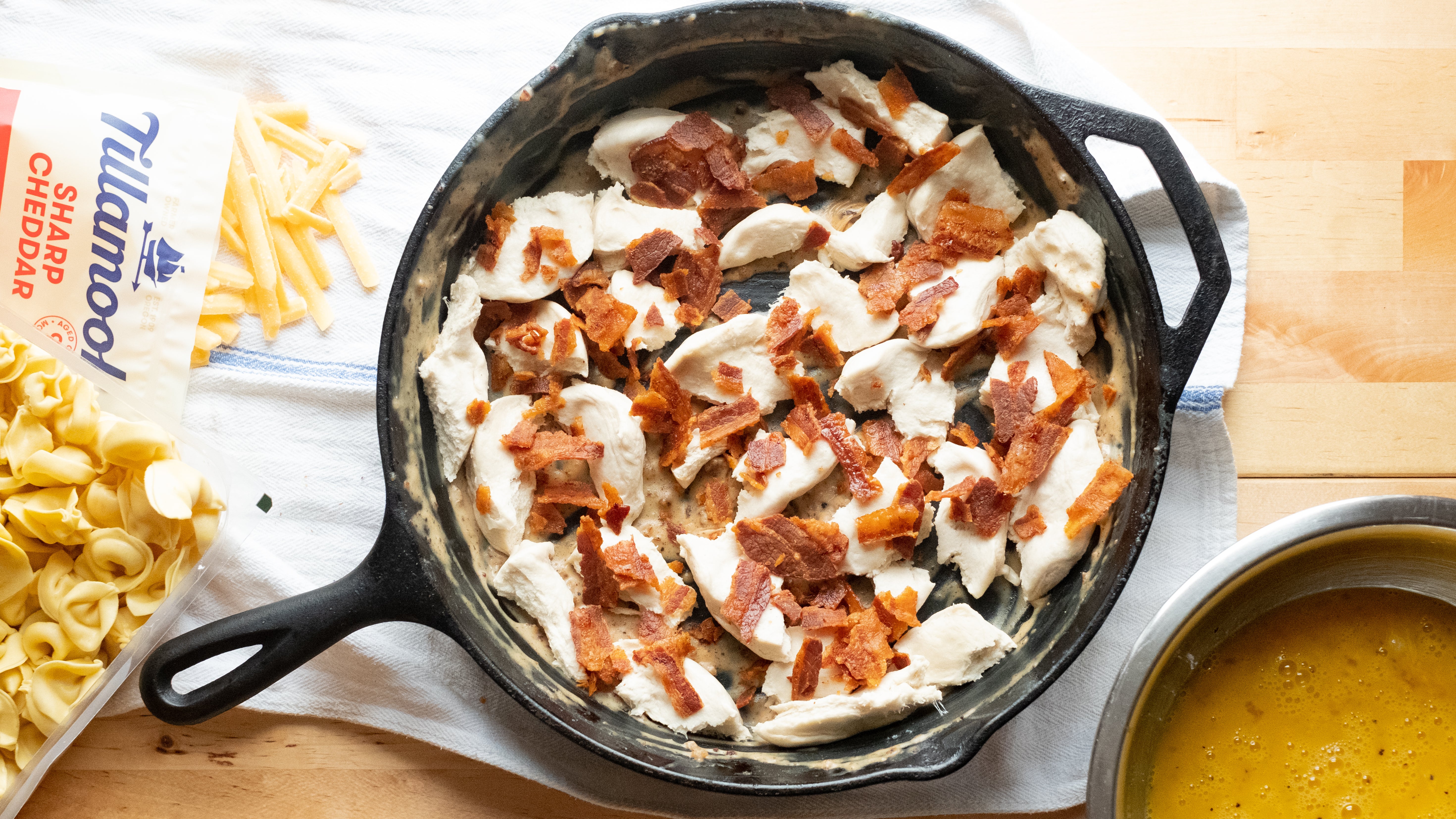 If you’d like, tear the remaining biscuits into strips and press them around sides of the pan. (This will make for a more solid, pie-like casserole; skip it if you prefer your breakfast piles on the gooey side.) Whisk the eggs together with a splash of milk and lots of salt and pepper, then pour into the skillet. Press a piece of parchment onto the surface of the casserole and wrap tightly with foil.

Bake the covered casserole on a sheet pan for 35-40 minutes at 180 egrees, then remove the parchment and foil and arrange the tater tots over the surface of the casserole. Increase heat to 220 degrees. Top with the reserved cheese, bacon, and sausage, return the skillet to the sheet pan, and bake for another 15-20 minutes, until the tater tots are golden brown and the casserole is bubbling hot. Cool for about 10 minutes if you can stand it. Serve in slices or scoops, topped with lots of hot sauce and maybe another sprinkle of cheese. Now is not the time for restraint.