Here comes the Android December security update. If you’re the proud owner of a Pixel phone, it’s time to check and see if you can grab the latest fixes, patches, and features for your device. But remember: Google is rolling the update out, as always, so it’s possible you might not have it yet.

Which Pixels are getting the December update?

As far as Pixels go, the December update applies to Google’s Pixel 2, Pixel 3, Pixel 3a, and Pixel 4 smartphones—and the XL versions, naturally. But if you have a Pixel 4 or Pixel 4 XL, don’t bother checking for the update today. You’ll have to wait until next week to grab it. That’s just the way it is.

And if you’re still using an original Google Pixel or Pixel XL, this is your final update, period. This shouldn’t come as surprise, however; when the devices launched, Google promised two years of Android version updates and three years of security updates. We hit the latter for the October security patch, and Google skipped a November update for the devices in order to issue one final wrap-up today.

Nope! In addition to those, Google is also patching a number of noteworthy bugs, which it detailed separately: 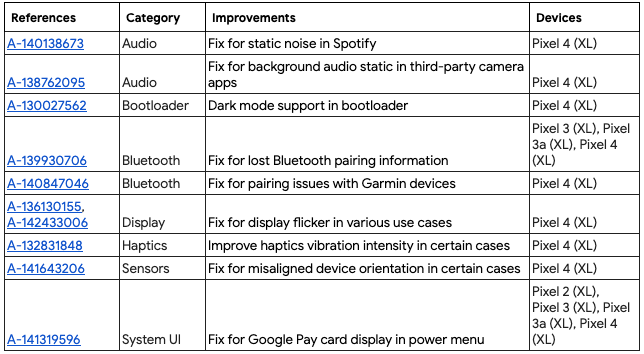 And a number of features are rolling out to older Pixel phones as part of the December update. According to Android Police’s testing, they include:

While it’s anyone’s guess when your non-Pixel phone might receive the December 2019 security update, odds are good that it’s probably rolling out to your device now (or some point soon). That includes you, Samsung and Essential smartphone owners.