Continue Using Apostrophes Correctly, We Beg Of You

Those of us who respect and appreciate proper apostrophe usage awoke yesterday to some upsetting news: John Richards, one of the most ardent defenders of the correct use of the apostrophe, is giving up. He posted his reasons for this decision on the website of the Apostrophe Protection Society, an organisation he founded in 2001:

There are two reasons for this. One is that at 96 I am cutting back on my commitments and the second is that fewer organisations and individuals are now caring about the correct use of the apostrophe in the English Language.

We, and our many supporters worldwide, have done our best but the ignorance and laziness present in modern times have won!

(Due to the increase in traffic to the homepage since Richards’ announcement, it is temporarily unavailable.)

I can understand the need to cut back on commitments once you’re 96 (!), but is it honestly time to cave to the ignorance and laziness present in modern times? It might be time to ease up on demanding complete sentences and proper capitalisation in text messages, but the line has got to be drawn somewhere—and this is where. I’ll be damned if I’m going to tell you that its ok to muck up your apostrophe’s. We deserve better. 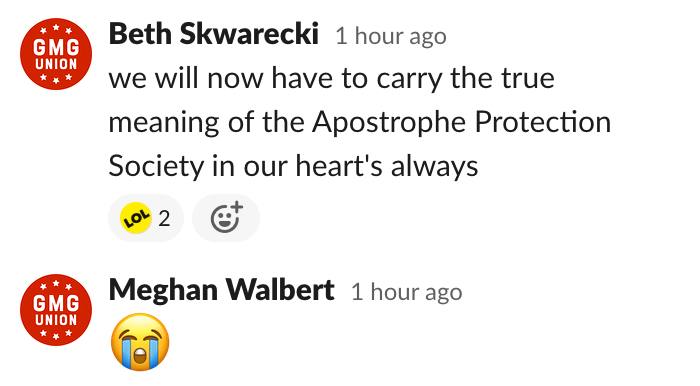 Apostrophes provide our written language with an extra level of nuance. They indicate possession and they take the place of missing letters in contractions. But they must be used correctly. If one place’s an apostrophe incorrectly, it can be jarring. I hope you felt jarred, just now.

In fact, this news couldn’t come at a worse time of year: Holiday card season is upon us, which means a whole bunch of you are going to address your envelopes to “The Smith’s” or “The Smiths’” and think you’re doing a bang-up job. But you haven’t made “Smith” plural. You’ve made it possessive, and now the Smiths feel unresolved, asking themselves, “Our what?”

When Richards was a younger man (a 75-year-old retired copy editor and reporter), he had the energy to rail against all the restaurant “menu’s” around his neighbourhood. He created form letters for group members to send to businesses to alert them to their grammatical faux pas. Over time, he gained followers and notoriety, as the Washington Post reports:

In 2013, Richards and the Apostrophe Protection Society scored a major coup when the Mid Devon District Council reversed its decision to ban apostrophes from all street signs. The government body had claimed that GPS devices would melt down when confronted by the punctuation mark, an argument that Richards deemed “appalling.”

But as he closes down the group, we can take solace that the website itself will “remain open for some time for reference and interest” (that is, once the traffic dies down). You can still peruse his apostrophe usage rules and his Frequently Asked Questions, which include “Can an inanimate object own something?” and “Should apostrophes be used after numbers or single letters?” And if you are in the mood to feel a bit of irritation, his archive of apostrophe misuse is a good place to visit.

Meanwhile, Grammarly has not yet abandoned all hope. Grammarly will still walk you through how apostrophes help us to clearly form contractions and possessive nouns and pronouns—and why they’re (almost) never used to make a noun plural.

Richards fought the good fight throughout his career—and well beyond it. Let’s (apostrophe to indicate this is a contraction for “let us”) not allow his work to be in vain. When in doubt, look it up.