What Does Impeaching A President Actually Mean?

Impeaching a U.S. president involves a lot more than a single trial or vote. As we’ve written before, it’s a long process that involves the following steps: a decision by the House on articles of impeachment, a debate over those articles by the House Judiciary Committee, a vote by the House for impeachment which must involve at least one approved article, a determination by the Senate on trial proceedings, a trial by Senate, and then a verdict by the Senate.

If you’re still confused by the process, we don’t blame you—after all, the process was designed centuries ago and only two presidents have been impeached in U.S. history thus far (Andrew Johnson and Bill Clinton, and neither was removed from office; Richard Nixon resigned before being impeached).

Thankfully, here’s an infographic that’ll make it easier to understand the process and only what you need to know, courtesy of the BBC/Reddit: 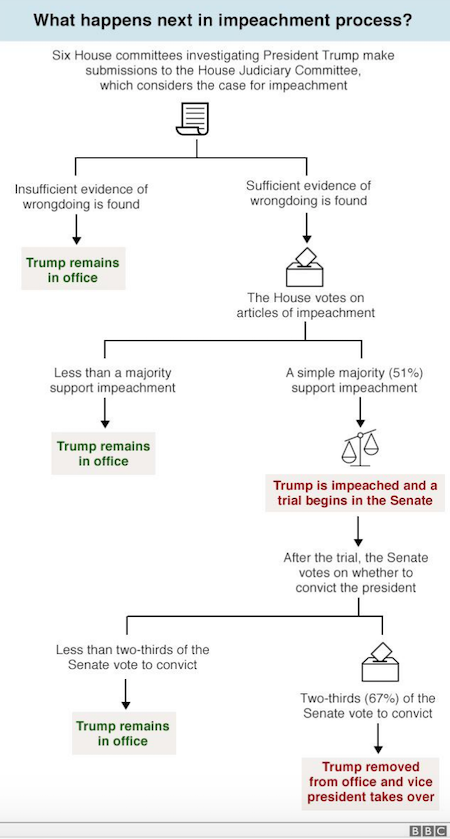 If you’re wondering where we are in the process, per the infographic, we’re only in the beginning stages and currently deciding if there is “sufficient evidence of wrongdoing” through ongoing public hearings and testimonies.

In the event those are determined, we’ll move onto the House deciding upon articles of impeachment/putting those to a vote. From there, a majority vote (which is likely, given the Democrat-led House) will result in the Senate taking action. As you can guess, the Senate likely won’t support impeachment with a Republican-majority.

If you want more detail, USA Today also wrote up a guide to impeachment, with the current Republican and Democrat count in both the House and Senate, as well as information regarding trials.

And if you want to keep up with impeachment proceedings, there are plenty of resources. You can sign up for the New York Times or CNN’s daily impeachment newsletters; both Vox and WNYC also have podcasts devoted to updates, in case you want to listen in.